When I was recently out doing some 360° paddling, I finally decided to try a reverse sweep roll. My understanding of the roll was based solely on the videos I could find of others doing it. I couldn’t find any that showed body positioning very well though. Can anyone point me to a few that show very good technique in a detailed way? I was able to complete the roll a few times, but it felt like I was putting too much stress on my shoulder. I’m putting this one on the back burner until I can figure out what I was doing wrong.

I can’t find a good video … but i know if I feel pressure on my shoulder the snap was not aggressive enough. When i capsize for a reverse sweep, I’m hanging on with both knees. I arch and get the head to the surface, let the non driving knee go slack while starting the sweep< then snap the driving knee hard one or two times. > nothing really has changed in my technique since this video was shot in 2009… I’m not as consistent with hand rolls is about it… https://www.youtube.com/watch?v=AqE7_9kijaE

Thanks for posting this. I thought the combination at the end from layback to reverse sweep was interesting. At least, that’s what I think I saw. Full disclosure: I am not a Greenland purist. I see some of the rolls as being useful to add to my arsenal but don’t intend on becoming a GP pro. I don’t have the beard for it.

You’re probably on to something with the snap, as when I think back I don’t remember actively doing anything with my knees and lower body. I’m quite strong with a sweep the other way, but just like rolling the first few times, you change a few variables and it’s hard to tell which way is up.

Any tips for keeping the shoulders protected while practicing this one?

The best view from a video I can think of would be from QajaqRolls:

Whitewater play boaters roll up off the back deck using a reverse sweeping motion all of the time because it is often much quicker than setting up for a conventional roll and allows them to remain on the feature. But they usually call it a “rodeo roll”.
And when they do it, they do not generally have the luxury of placing the paddle blade in a set up position before capsizing so the roll requires an underwater sweep of the paddle and body under and across the rear deck of the boat.

You can find a lot of videos on line for the rodeo roll. Here is one that attempts to break down the mechanics in a step-by-step fashion with good underwater views:

Of course, that was with a whitewater play boat. Here is the same roll in a sea kayak. The paddler is using a “Hi-N-Dry” paddle float, unfortunately, but it shows the body mechanics of the underwater body and paddle sweep pretty well:

Are you using a greenland paddle or that funny looking euro paddle? If greenland the DVD This Is A Roll has good instruction on the reverse sweep among other rolls. Here are three rolls you should have the layback the reverse sweep and the storm roll. by me http://www.youtube.com/watch?v=9qv5aqfJrZg&feature=youtu.be

Don’t get the reverse sweep confused with the back deck roll. Either one is great for the surf, where the energy of the wave can help roll you back up. Not sure I’m athletic enough anymore in my 40’s, to pull off a back deck roll in the rough stuff in a sea kayak, unless I got really lucky with the timing in the surf. Still fun to play with messing around, but does put a lot of pressure on my shoulders, which means I’m probably not doing it correctly.
But yeah, if you’re not using the hip snap, you’re likely to tear up your shoulders, trying to muscle it up. Being a big guy been there, done that. Smart move to back off until you can get your head around it. Might be worth finding someone who can watch you, or video you to give you pointers, rather than risk hurting yourself trying to figure it out on your own.
Good video of the back deck roll for a sea kayak https://youtu.be/BxC5cUWA0f4

I hadn’t seen such a nice example of a back deck roll for sea kayaks before. However, it is indeed the “reverse sweep”, (Greenland style) that I’m after here.

Both are funny looking in their own way. Attempting the reverse sweep I was using the GP exclusively. Yes, perhaps it’s time for me to support Ms. (Mrs?) Wilson and purchase her video like many other have…

@Esstyle said:
The best view from a video I can think of would be from QajaqRolls:

You’re right, this does show some good angles. It doesn’t look like the paddler is keeping his right shoulder very protected though. Maybe there’s less pressure on it than it looks, but when the arm is extended above the shoulder seems to be when most of the “push” on the paddle is happening. This is exactly when you don’t want that pressure on the shoulder, I’d think.

Keeping the elbows in and down will help protect your shoulders. In the below video the hands almost look like their in the paddlers lap, although it seems like most of the roll happens way back at about five o’clock to three o’clock.
Seems like it would be a “fun” roll with a Greenland paddle, looks like good setup is important, a little disorienting to be starting out at the back of the boat.
Did you try it with an extended paddle to get more support?
https://youtu.be/bOtgkSSik4I

Here’s the sequence that I’m most concerned with, and where I see the most potential for hurting myself: 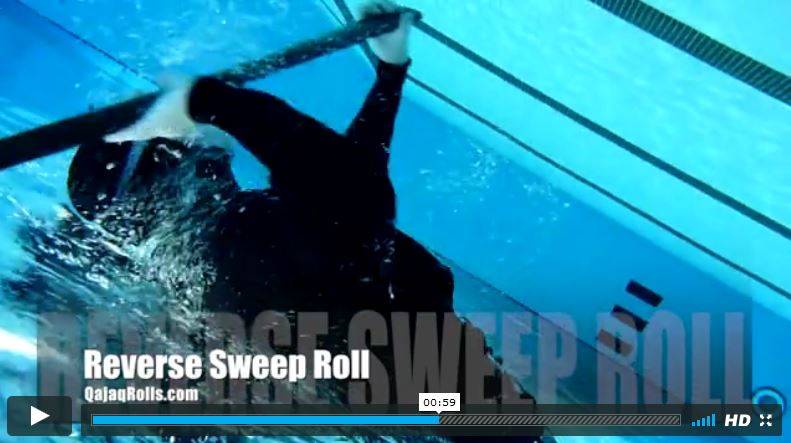 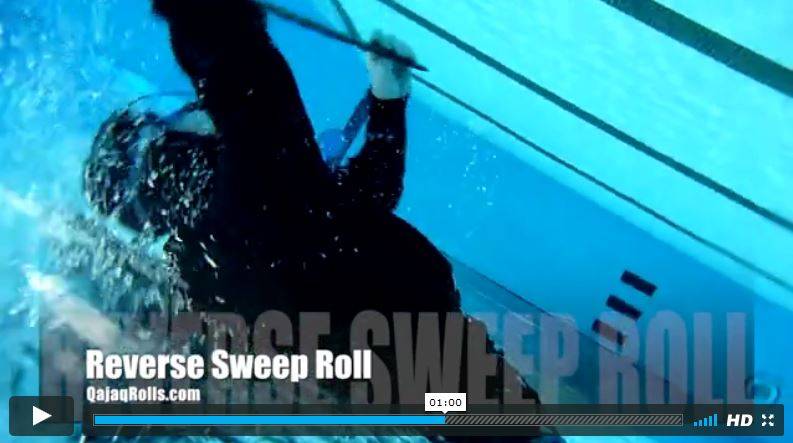 3: Boat rotation is occuring, possibly by putting force on the paddle, or by unwinding the torso. Difficult to tell. 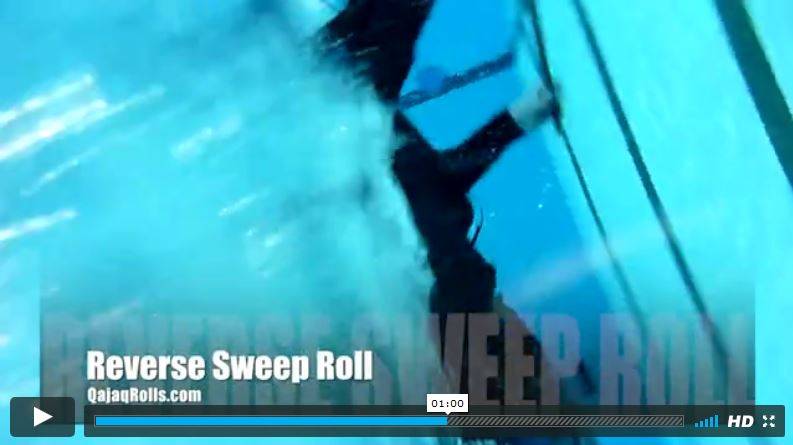 4: Boat is upright very quickly thereafter, with what happens in between hard to see. Now the hands and elbows appear to be below shoulders. 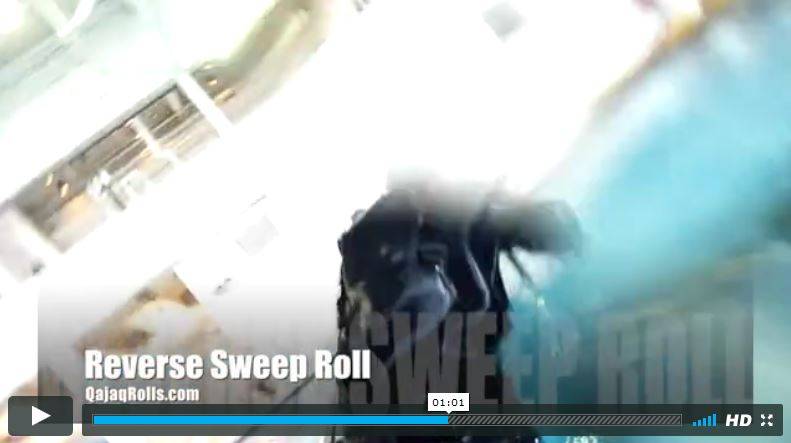 It all happens very quickly, of course. When I analyze videos of a modified sweep or layback roll, I can usually see where the paddler is initiating leg drive, hip flick, whatever you want to call it. I really can’t see where it’s happening here though.

Send a note to Chris (Christopher Crowhurst - Qajaq rolls) or catch him on facebook. He’s likely to give you a pretty good answer.

I can’t speak to how Mr. Crowhurst performs his reverse sweep rolls, but I personally don’t have any discernible leg drive or hip snap during the roll. For me, it is more like a constant pressure with my right leg, and most of the roll occurs due to the abdomen crunch. My hands mostly just hold the paddle in place. If you try to brute force the roll, I suppose you would feel pressure in your shoulder though.

Gents you may want to check out my training video here that shows the progression to a reverse sweep hand roll;
https://vimeo.com/47043251
It is worth mentioning that the roll can be done without arm/shoulder effort and I great way of measuring if you are doing it well is how little pressure you are applying with the upper arm. I f you are finding pressure in your shoulder you are not using your torso and legs appropriately.
I like to think of the motion of the recovery as dragging the kayak under your belly as you drive your head down, the arms should just come along for the ride. The fact that we can and do push with are arms is unfortunate as it is not necessary, I must admit its what I do when I am tired, because I can, not because I should.

To build on a point someone mentioned the white water back deck roll is not really a usual roll for sea kayakers although I added instruction to my website as I love the roll: http://qajaqrolls.com/rolls/forward/back-deck-roll

As esstyle stated there is no snap or flick, the pressure or crunch starts as soon as the paddle starts its journey forward and ends when your nose is on the fore-deck. Some people like to talk about leg drive and load and drive but this roll needs none of that aggression, this is an elegant relaxed roll when done well.

Thanks QR, great insight and video!

Many people ask what is the practical use of this roll. I have found that when pinned to the back deck by a wave that rolls me, then this roll allows me to recover from that position without needing to change position and “setup”. If you watch the “This is the Roll” Part 1 DVD you will see a great example where Turner Wilson rolls under a large wave when he is trying the break out of the surf zone, his was intentional, mine usual are not

Kayak historian John Heath said that this roll is very popular in Greenland, especially in summertime, when short spray skirts are used (that are often left open at the top for ventilation). The mechanics of this roll allows very little water to enter the partially open cockpit.

I don’t use this roll very often in the wild, but it’s a fun roll to practice.
Working on a chest-scull first will often help with the transition to this roll since the recovery is similar.

I have a few tips for learning this roll on the Qajaq USA forum at http://www.qajaqusa.org/cgi-bin/TechniqueForumArchive0_config.pl/noframes/read/42 .

@Qajaq Rolls said:
Gents you may want to check out my training video here that shows the progression to a reverse sweep hand roll;

I’m assuming this is “you” in all of the videos. You make it look so easy, which is what people who can’t roll at all tell me about the rolls I do have.

I appreciate your input to this discussion. Your descriptions of the motions, plus the video linked above might just give me enough to give it another go. When I first tried it, I don’t think I was aware of where the power was supposed to come from. Which is, from the abs rather than the arms/shoulders.

It took me quite a while to become comfortable face down in the water under the boat, but slowly I’m getting there. I think I’ll try your 1-2-3 exercise moving the boat before attempting completion of the roll.

As to the practical implications, I’d like to have a roll for a few likely scenarios that I’d encounter. This one seemed like a good one to add because you’re in a position that you can’t execute a regular sweep without considerable underwater maneuvering of the paddle.