Review of a $30 GPS Speedometer

I have recently been trying out a $30 CycPlus Bike Computer GPS speedometer (model G1) on my yak. It is impressive and some other paddlers might be interested. The device is currently sold at Amazon (after a brief stock outage) and at the Walmart website for two dollars more. It provides:
a) Real time speed in 5/8” high characters in MPH or KMH;
b) Time and distance in smaller characters;
c) One-button push to see the average speed;
d) Automatic cessation of all measurements when the vessel is brought to an approximate stop and automatic resumption when again under way, adding to the already accumulated time and distance;
e) Waterproof case; and
f) Rechargeable battery with roughly 10 hours of run time (in warm weather).

I benchmarked the CycPlus’ speed readouts against my new car and against a Garmin portable GPS navigation system for automobiles, the latter in the car and on the yak. The CycPluys performed well but might be under by 1/10 of MPH. It responded to acceleration and deceleration more quickly and smoothly than the Garmin. My tests of the distance reading found it close to distances taken from Google Maps satellite view. A small portion of the Amazon reviews indicate the distance reading can be substantially under, with one bicyclist reporting this occurred on a path having heavy tree cover—and mile posts.

The CycPlus has a few quirks. It does not display speed until the craft is going 1.6 miles per hour, and does not start counting and displaying time and distance until 2.4 MPH, and then all three stop after the speed declines below 1.6 MPH. The distance first displays in feet or meters, and as it exceeds the four-digit display, it switches to miles or kilometers, with one decimal place. The supplied mount is designed to affix on ½” to ¾” tube. For paddle craft, it can be secured to a short length of plastic pipe, conduit, dowel, etc., with a line run through and lashed to the craft. As with all GPS devices, it displays speed over our globe’s surface rather than through the water, so the indicated speed will be greater or less than actual speed through the water that is being affected by river flow, tides, or currents.

As of October, 2021, Amazon is offering at least two other brands of similar devices, the Meilan Mini GPS Bike Computer and the XOSS G Mini Bike Computer, both at the same $30 price point and with posted reviews similar to those for the CycPlus. All three companies offer other models with additional features and higher prices. Caution: Some bicycle “wireless speedometers” and “wireless computers” measure the revolutions of the wheel, and thus will not work in paddle craft.

These low-end GPS speedometers can be used to check the effects of varying paddle stokes or paddles, to monitor training sessions, and for assistance in dead-reckoning navigation. If you paddle more than a half-mile from shore or in unfamiliar places, a full-fledged portable GPS navigation device is convenient and a prudent safety precaution–but most will cost 5-10 times as much and will not have a large display of speed. Some people use phone apps for checking speed and for navigation, but others don’t want to deplete the batteries of their only means of communication, or find the screen difficult to read, or don’t want to risk loosing or damaging $500-1,000 phone.

Do readers have any experience with these low-end GPS speedos? Does anyone have thoughts about how else they might be used in paddle craft for fun or safety?

What’s your connection to the manufacturer?

None, except that I bought one of their products.

Sounds interesting, but quite happy using the Gaia GPS app on my phone. Just a fabulous product.

This is the lowest tech you can get away with and it shows exactly what is needed. It is so hard to tell what ground speed is since looking at the water can be very deceiving. Let us know what real battery life is. Can you change it to km/h?

I have a cheaper Bryton bicycle computer with GPS -speed. It also had a Heart rate monitor and cadence sensor (Bluetooth and/or ANT connection). In the beginning I put the HRM on, and shifted based on cadence. But at some point I realized that information is useless and takes away from enjoyment. Having to put on the HRM, maintaining the sensor battery etc. I sold the HRM, and never replaced the cadences sensor battery. Never miss them.

I don’t know why I didn’t think of it, but next year I will use that cycle computer for boating.

Only downside is over time the battery gets weaker and I need to have it charged before every ride. At below freezing it also doesn’t work, which isn’t a problem for boating.

If I had to buy a new computer, I would buy exactly what you have or similar. GPS speed and distance - nothing else.

The reason it doesn’t measure below a specific speed is the inaccuracy of GPS. It also may stop the time when you are below that speed so your average speed only includes riding time and not the time you wait at a traffic light etc. that makes sense for a bicycle, and probably is not a bad disadvantage for boating. If you go below 1.6 mph, you probably already know it is slow

50 years ago you couldn’t buy it for a million bucks.

Inflation is bad! You got yours when?

Good questions. The CycPlus G1 can be switched to display in meters and kilometers. I had it on for probably 6-7 hours in 60-70 degree weather and the battery display is now showing one of three bars, so it will probably go about the claimed 10 hours. I have edited the original posting to reflect these clarification.

Damn: Soon after I posted this thread, Amazon reported being out of stock on the low-end Cycplus (model G1) that I had reviewed. Now, two days later, it is showing it back in stock. The device that PaddleDog52 found on Amazon on Oct. 9th is a higher-end model M1 by the same company, which sells for $50.

Been happy with a free phone app, Geo Tracker (by Bogdanovich, new apps called Geo tracker come out all the time). Shows time and average speed moving but not current speed. What I like is it shows your location on google maps and you can download a kml to your pc, which loads google earth, shows your route on it, and provides a speed graph. As far as battery life goes you can turn it off, so however long your phone will run. Apparently your phone keeps a record of your location and when you turn it back on again the app accesses the record.
https://play.google.com/store/apps/details?id=com.ilyabogdanovich.geotracker&hl=en_US&gl=US

While bicycling I call it “my lyin’ cheatin’ phone app” because the mileage comes in about 0.5% below what my carefully calibrated cycle computer says. Having said that, the cycle computer relies on tire rotation count and seems like the accuracy depends on tire pressure which affects distance per rotation.

I’m curious how you calibrated your cycle computer to better than 0.5%? Most people that roll out the wheel don’t sit on the bike. Besides the normal reading/measuring error, this introduces error due to tire deflation from weight. Riding also is dynamic, if you go over a bump the effective wheel diameter gets smaller momentarily.

If you are within 0.5%, there is no way to tell which one is the accurate one. Both probably are wrong.

For tracking I use the Samsung Health app. it also helps me find my way back. But a separate speedometer is good to see instant speed. I can’t leave my phone screen on all the time due to battery and a phone screen may be hard to read in the sun. And once you open the app, you stop paddling, so you don’t see your instant speed. I like using my phone, but sometimes it is just better to buy the $30 separate device. and better to drown a $30 computer than a $1K phone.

I’d be very interested in an inexpensive GPS-based speedometer. I was recently wondering if such a product existed since I get curious around how far I’ve paddled and how fast I’m going. So I was reading reviews and trying to decide which one to buy but then I see lots of concerns around basic accuracy. The $30 Meilin is criticized for slow satellite acquisition and loss of satellite connection. The unit you bought seems to get reviews as good as any at the price point but if it doesn’t acquire data until speed exceeds 1.6 mph (or 2.4 mph) then it can’t tell me how far I actually paddled unless I never stop (or slow down due to obstacles/hazards). I’d want more confidence that I can actually measure speed and distance reliably and accurately before trying one.

Thx for the advice PD. I fired up my ancient Garmin Etrex today and it did a fine job. 2-4 mph upstream depending on how well I could hide behind fallen trees and 5-7 mph downstream…typically 5-6 with low/moderate effort. The Bell Magic isn’t quite as effortless as some smaller boats but if you invest the minimum effort/muscle that it likes it delivers good results. 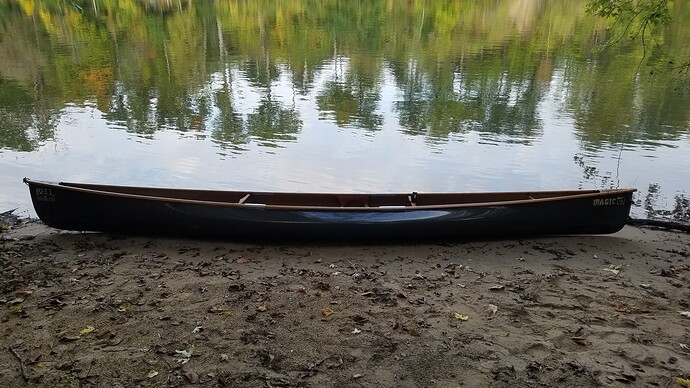 Some GPS devices are better than others. But most differences come from how they handle obstacles like tall buildings, tree cover etc. All that is not a problem on the water unless you go through a canal surrounded by skyscrapers.

For tracking just use a separate phone app. that includes map etc. A speedometer just shows you instant speed. and if you go below 1.6 mph, you likely don’t care about speed. I assume people want to know their maximum or travel speed when actually moving. Obviously anyone can buy a much more expensive device, but i think this $30 device should be OK.

Exactly. If the bike computer reported the lower mileage it would be the lyin’ cheatin’ device.

There is a measured mile I calibrated against but the calibration is only good for that tire at that psi on that type of surface. The bike computer lets you set wheel circumference in 1mm increments.

Kevburg, I recently tested the GeoTrack. The sampling rate is very slow. For some reason, it clips everything above 5 mph and below about 3.5. When compared to my Garmin, the time, distance and average speed was all on target.

The rail to trail I travel is reported to be 40.4 miles round trip. I have the same problem with air pressure changing distance as traveled. I calibrated the diameter of the wheel based on 50 psi in front tire, and that gets me to within .1 or .2 miles which is close enough for me.

So yesterday I did well over 15 miles with average upstream speed of 2.3 mph on my old Garmin Etrex. Lots of time spent below 1.6 mph to go around/under obstacles. Many smaller rivers have a canopy of trees so the way the GPS deals with obstacles is relevant to me and it’s disappointing to me to need a separate tracking device for basic trip distance info but a $30 GPS based speedometer is still appealing as long as it’s reliable and consistent even if not super accurate. 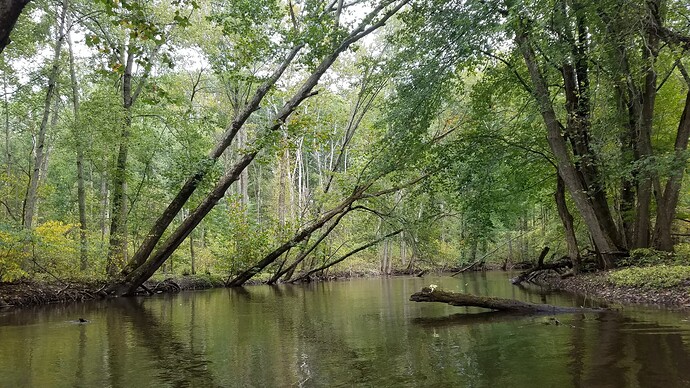 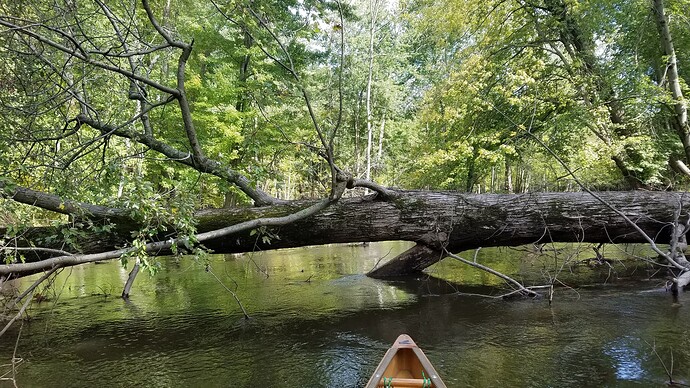