I was paddling upstream in a solo canoe on a river this past Saturday and staying very tight to the right bank when I heard and then saw a group of three kayakers coming downstream towards me from around the next bend. I could only see their heads through the brush. The river was around 100 feet wide at that point so plenty of room in total. I rounded the bend and continued to stay very tight to the right when I saw that the lead kayak was pointed straight at me and trying to angle towards the bank and go between me and the shore (which would have required me to move left). I’m in a highly maneuverable river capable solo. I held my line and as the kayak got within about 20-25 feet I made a strong move towards the right bank to make my intentions very clear and since the rivers are high there was still 2-3 inches of water to float me. The lead kayak finally passed me on the left and then the other two kayaks which were about 20 feet behind the lead boat also passed on the left but gave me much more room and then gave me a friendly hello and “nice day” (which I kindly agreed with). I think they could tell I was not too happy with their lead paddler. Had I jogged left to let the lead kayak hug the very inside of the bend we might have bumped and then I would have to dodge 2 more kayaks where no one would know which line anyone would take. I am sure that the lead kayak didn’t know what the other two were doing since the paddler never looked back. All three kayaks were sea kayaks and they were cruising with the help of the current so I really don’t think they could all stop on a dime.

I assumed that I had every right to stay tight to the right bank and I’m quite sure this was best for everyone. Did I have the right of way?

Darn sea kayaks think they own the road… :*
Current will tend to push you to the outer edge of a bend. Kayak may not have realized just how much.
We’ve had close calls in powerboats rounding narrow bends in strong current.
I’d say you had right of way… FWIW.

Of course, seakayak = top of the food train = right of way. Git with the program.

Canoe discrimination and kayak bullying is not acceptable >:) I think the lead kayak did not know how to steer in fast current and got slewed sldeways in the curve… Newbie mistake… However I hope you were ready to joust the bully with your paddle!

You had the right of way !
But with that said, where we paddle all winter in the mangrove creeks and canoe trails there are a gazillion renters, newbies and gunnel bangers. You can round a sharp bend and they are completely blocking our path as they come at us and completely oblivious to us, so we just grin and wiggle our way through them as best we can with a friendly hello.

Unskilled people in any watercraft tend to go exactly where current and wind take them. They may simply have been hoping that you were more ready and able to maneouver around them than they were you? That said, if I were coming downstream, assuming no dangerous obstacles, I would definitely want to give the upstream paddler the right of way.

In my whitewater experience it was the down river paddler who has right of way over others playing on river features.

Sounds like you weren’t playing, but rather traveling upstream. If the kayakers had a whitewater background they may just have assumed they had the ROW since they were headed downstream.

@sing said:
Of course, seakayak = top of the food train = right of way. Git with the program.

May you be skewered by a sea kayak while peddling your floating fishing platform. :#

Good to know the downriver whitewater rules and that makes sense. These folks were not newbies and the current was not pushing them around.

How much was the water moving? There is a general rule (?, maybe just etiquette) that down river boats have right of way. I am thinking of when someone is on a play spot in white water, you need to get off the spot if a boat coming down with the current needs to go through that. The thought probably being that they boats going with the current can’t stop, so you need to yield to them.

Chances are this isn’t really a right of way issue, but just some boats that weren’t in full control due to currents and skill level and such. Your giving the strong indication of what your intentions were was the right move.

Peter, I’d estimate the current at well under 2 mph since it was easy to paddle against for hours. For sure the water was silent. I was tight to the right going around a right hand turn so on the inside of the bend. Any current would have pushed the kayaks coming downstream away from me. None of them seemed to have any control problems. I would have had to make a quite dramatic move to go on their outside.

CapeFear - the current would have pushed them away from me and there was no wind to speak of at the time. But of course yes I was more capable from having the more appropriate boat plus my awesome canoe skills.

Jack - I agree with you 100%. When I used to paddle upstream on the Huron River in Ann Arbor and encounter folks in aluminum rentals coming downstream I just made sure they couldn’t hit me even if they tried and many times they were totally out of control. I also fully agree that powerboats always have right of way. This past Sunday I saw the biggest boat I’ve ever seen on the St Joseph river (around 50 feet) so the dog and I just went straight into a flooded area and gave them the whole river. Hard to see in the pic but at far right is the boat’s big fiberglass butt and even just idling his diesels he was making good speed. After he passed we continued upstream and turned out his boat was so big he wasn’t sure he could fit under the I94 bridge so he turned around and we got nailed with his wake anyway…lots of little closely spaced waves that reflected forever which was unusual but no big deal. If only sing was there in his sea kayak I would have said “sic 'em sing, you have right of way!”. o:) 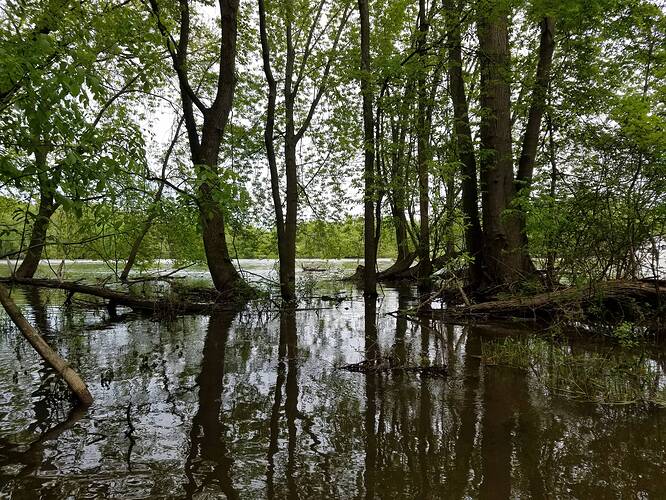 @Waterbearer said:
In my whitewater experience it was the down river paddler who has right of way over others playing on river features.

Sounds like you weren’t playing, but rather traveling upstream. If the kayakers had a whitewater background they may just have assumed they had the ROW since they were headed downstream.

Odd, I had always thought that only applied to floating undercuts (rafts). The expectations was that hard boaters should be under control and respectful of the paddler in the feature. I know that at a popular spot like Swimmers (Lower Yough) you would be rather unpopular if you ran someone off or the wave coming downstream - especially as there are lots of routes.

Tom, if I read your comment correctly you were staying to the inside of the bend quite possibly to stay out of the stronger current. I don’t see any valid reason for a downstream paddler to head to the inside of you with the river as wide as it was unless there was an obstruction on the outside of the bend. Also, believe it or not, sea kayaks can stop, maneuver, and go backwards just like canoes. Heck a kayaker usually has two blades & doesn’t have the excuse that it takes a little skill to do that with a single blade.

Lots of possibilities. It wasn’t until my husband and I did some tidal race and proper whitewater that we realized how often long boaters may have a lot of miles paddled but have not quite figured out how to handle stronger current. Us included - we had a lot of paddling hours on pretty bumpy stuff at that point but were initially skunked by the equivalent of class 2 WW current.

In the WW stuff in this area, I used to come around a turn trying to avoid features that people might be playing in nearer the shore - attainment, on one spot a reliable standing wave etc. Of course that is usually more on the outside of a turn or the middle. When on the inside of a turn, seems to me everyone should be trying to hold their course rather than cause someone else to have to move. Down or up river.

I tend to go with some above that the long boater may have been worried about control in the current and so was heading as far inside as they could to help with that. Doesn’t mean I would end up wanting to have made you move if I had been the paddler. I would have gone by you being grateful for your patience and wishing I had better boat control.

rival51 - you are right, there’s no reason for me to assume that a sea kayak can’t stop or do anything a canoe can do (and more) but the paddler was so casual and close that I’m not sure they had time for two strokes to back paddle so I jumped out of the way with one stroke. I was close to shore on the right side because that’s what I always do because you see more underwater wildlife, minimize the current, and have more fun going around downfall. I think I also typically choose right side because it is consistent with rules of the road which may be irrelevant. Pic below shows same river same day just a bit further upstream.

Just FYI on the stretch of river where I passed the kayaks there is a golf course on the other side and the golfers never pause for canoes or kayaks and balls do plop in the water nearby fairly regularly so maybe we were all just trying to reduce our chances of getting beaned…although this spot is safer than the spot with a tee on one side of the river and hole on the other side. 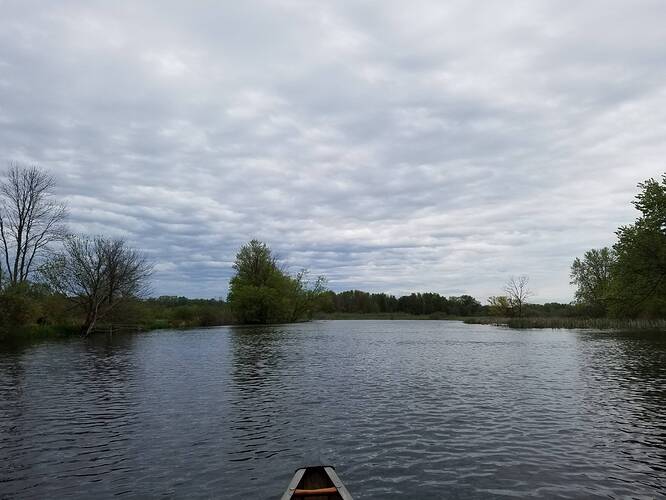 I appreciate everyone’s comments. It sounds like there are no hard and fast rules and even if there were the odds of everyone knowing them and following them during a sudden encounter seem small. This particular bend was sharper than 90 degrees.

After thinking about it more I remembered that there is a spot further upstream where the river is narrow and there is a bend near 180 degrees where I have also been surprised by other boats and everyone always takes the inside of the bend in both directions. In these cases I just do whatever I can to make more room for the other boats.

@sing said:
Of course, seakayak = top of the food train = right of way. Git with the program.

May you be skewered by a sea kayak while peddling your floating fishing platform. :#

Good to know the downriver whitewater rules and that makes sense. These folks were not newbies and the current was not pushing them around.

I would have stood my ground 'cause my Hobie is a barge.

The seakayak would have run into me, flip and given its occupant an opportunity to test his/her awesome bracing/rolling skills! >:)

Perhaps next time (providing it’s in your “Eddy Kit”), hug that river-right eddy, and start strummin’ Oh Sussana on the four-string banjo. Sets the yak herd to stampeding river-left every time.