My daughter wants us to come visit this weekend and bring kayaks for a day on the river. I know there are lakes nearby but we’re more interested in rivers. Can anyone recommend a river within and hour or two of Madison/Middleton? We’re thinking a 7-9 mile float.

For a really short river float and almost in Madison you can do the Yahara R. from McFarland down to Fish Camp on L. Kegonsa. There’s a spot you can put in and park just to the east side of HWY 51, right below the dam on L. Waubesa, in McFarland. Take out is at Fish Camp (a co. park) right as the Yahara enters Kegonsa. Its not a particularly beautiful run, but not bad either and its really close.

Another really short and close paddle is Six-Mile Creek. Its an up-and-back paddle. Put in is at a small bridge on North Shore Bay Dr. just to the south of the junction of Co. M and Co. K on the North shore of L. Mendota. Paddle upstream several miles till you find the river blocked by downed trees. That’s probably far enough, though if you continue upstream you might get closer to Waunakee. Its another so-so paddle, but convenient.

Another option near Madison is Black Earth Creek. Most folks put in behind “The Shoe Box” shoe store on hwy 14 in Black Earth, though a shorter option is to put in at the Olsen Rd. bridge behind Wisconsin Heights High School. Most take out at Lions Park in Mazomanie, though again, it is also possible to take out at the Cramer/Hudson St. bridge for a shortened run. Shoe Box to Lions park is about 7 mi. This is a section that has been known mostly for trout fishing though in the past four or five years has been cleared and is growing popular for paddling. It has some gradient and a few small ledge and riffle rapids. A couple locals made this drone video of it, to give you an idea what its like… not a big deal, but close to Madison and it has a few “sporty” spots. 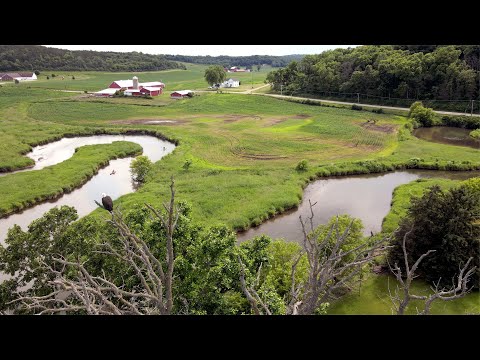 For something a bit more interesting , and not too far from Madison, try the Wisconsin River. Probably about the easiest section from Madison would be to put in at the Mazo landing (Blackhawk Canoe Rentals) on County Y near Sauk City. Take out at the Arena Landing (AKA Cedar Island on some guidebooks). Arena is a small town just west of Mazomanie* on hwy 14 and there are signs pointing to the boat landing. The landing itself is not so easy anymore, as the river has changed course in the last several years and it takes a bit of dragging over sand to get from the navigable part of the river to the landing/ parking area. But its a nice stretch of river though sometimes heavily used on summer weekends. There are places along that stretch where you won’t hear a man-made sound - no roads, aircraft, etc. Ferry/Cactus Bluff is on river right just after you lose sight of the last house upstream. Look for a small creek - Honey Creek - entering from river right just after a largish island. Used to be an eagle’s nest on that island, though storms may have taken it out recently. Land at the base of the bluff and there’s a trail leading to the top of Cactus Bluff which offers a nice overview of the river. The take out will be just past the next houses visible from the river on the left bank. Its about an 8.5 mi run.
PS: there is a take out at Ferry Bluff also, accessible from hwy 60, but its only a mile below the put-in, and so probably not of use to you unless you want to put in further upstream and paddle through Sauk City - which is a less pleasant paddle, IMHO. Its also on the “wrong” bank of the river if you’re shuttling on hwy14. Have to go a few miles out of your way to find a bridge to cross on.
*I should mention - there’s construction right now on hwy 14 in Mazomanie. Your best shuttle route right now from Co. Y/Blackhawk Rental landing would be Co. Y south to Mazomanie; right at the stop sign on Hudson St.: stay on Hudson going west out of town. Keep going on the blacktop till you cross the RR tracks and come to hwy 14. Go west on 14 and you’ll come to Arena. Turn right at boat landing sign (BP station), cross tracks follow left turn in road, and turn right at stop sign. It’ll take you to the Arena landing.
If you can get a glance at “Paddling Southern Wisconsin” by Mike Svob, which should be available through the library, it will prove useful to you and your daughter for planning future trips. The stretch I mention is contained in “Wisconsin River 5” in that book. There is only one section of the Yahara mentioned in Svob’s book and it is quite a ways downstream of what I described.

Thanks for the detailed suggestions. About how far (in distance or time) is Mazo Landing to Arena?

I’d take her to the wisconsin river as a lot of rivers are pretty low, so the smaller creeks may be pretty shallow. The yahara system can be pretty green and gets worse as the summer progresses. The Wi river is a senic float and popular. If you get out and explore the sand bars, be careful of the downstream side.
http://wisconsintrailguide.com/paddle/lower-wisconsin-river.html

Sorry for the slow reply - I’ve been away from home/computer. Its about 25-30 minutes between the Co. Y landing and the Arena landing.
Dago’s is good advice. The river is pretty friendly, really, but there are deep fast channels and often enough a steep drop off on the downstream end of the sandbars. Watch for poison ivy at the edge of all wooded areas. In the heat of summer take care to stay hydrated - it can be a bit of a ways between opportunities for shade.

We got up this morning and they were predicting 15 MPH winds from the SSW which would be a direct headwind on the Wisconsin. We had two novice paddlers along and last night we played around in the Cherokee Marsh and they really struggled with the wind. We decided to paddle the Sugar River today so they wouldn’t have to fight the wind on a more open river. The Sugar turned out to be perfect because the banks protected us from the wind. We’ll hit the Wisconsin on the next visit, especially if the novices aren’t along. The water was low on Sugar but nobody got stuck and everyone enjoyed the day.

Madison is the home of many paddleheads. I would head to the local Rutabaga store for some information.