Hello all, I am new to kayaking and have picked up an old Dimension River Runner R5 kayak. I plan mostly to run flat water with it. At least until I learn more about the sport.

I am looking for any information or insight into this particular kayak. I would really like to be able to get a skeg for it as I understand I will need it for on the lakes.

Any help or info will be greatly appreciated.

From what I recall about those R5's they were a round profiled old-school white water boat, long and with a small cockpit, heavy and really unstable (designed to go fast and be maneuverable in rapids.) Similar to the classic Perception Dancer or an old hand-built fiberglass Augsburger mold slalom boat I used to have. The maker tried to hype them as "suitable for flatwater" for a while but I don't buy it. Slapping deck rigging on a whitewater boat doesn't make it touring worthy.

Even as a moving water boat it was never a worthy match even to others of the era like the Perception Dancer. I did the Cheat River canyon many years ago (Class IV-V) and recall one of the guys having a "tupperware" (semi-clear white) R5 -- he was more out of the boat than in it during that trip.

Comments from those who remember them are "sucked royally" and "a real dog". I doubt you are going to be very happy trying to cruise flatwater in it -- even if you could add a skeg somehow that will not keep it from being squirrelly and not wanting to stay upright. Price was probably right, but there is usually a reason for that. I hope you did not pay more than $75 for it.

HOnestly, you are not going to learn much about modern kayaks and kayaking from attempting to use that boat on lakes. You may develop a more colorful vocabulary, though.

Thanks
I bought it in an auction for 80, so I guess that isn’t too bad. I also bought 3 Lotus kayaks from Lifetime. Sounds like I may be using them more than the old River Runner. LOL

R5 was my first kayak
over 23 years ago—they are nothing like a Perception Dancer, which is a classic white water boat–they don’t roll easy because of the design of the rear deck, harder to turn than a Dancer and nowhere close to a Dancer in manueverability. They were an attempt back in the late 80s early 90s to market a hybrid white water/touring boat. They are better in flat water than rapids, but don’t really compare with a touring boat—I sold mine after two years, got a WW boat–sold that 4 years later and eventually ended up with a sea kayak (I’ve had two since)Since you only paid 80 dollars for it, you will get your money’s worth but eventually you will get a better boat.

If you can, post a couple of pictures.
I don’t recall that maker and model, which is kinda surprising considering how many decades I’ve been following the market. Or, I could just be getting senile.

Trust me -
you do not want to introduce yourself to the sport in a boat like that. You will quickly become frustrated and you will lose interest very quickly because it will be no fun. I made that mistake myself once long ago and it turned me off to closed boat paddling for 20 years. Later, when I purchased a proper kayak, I realized what a dumb mistake I made back then. I love kayaking now that I have a suitable craft. Spend some time and search around for a boat that will fit you well and bring you along in the sport in a reasonable way. Just one man’s opinion.

Took R5 to the lake
I was warned I might expand my vocabulary with this kayak and they were right. Very frustrating. I am a total novice and understand there could have been quite a lot of user error but I could not keep a straight line. With only a light breeze I was turning in circles and entertaining the fishermen on the shore.

By contrast, I took the little Lotus out also and it handled fine. Very slow and aerodynamic as a brick but stable and manageable.

I am going to take the R5 out and run the river some with it too but if I have similar results I thinking this will go back to the auction block. Maybe someone who knows what they are doing will have better results.

R5
Does anyone know where I could get a skeg for R5??

and reviews on this website confirmed what I thought the boat would look like. I think it could be a lot of fun. Not necessarily beginner friendly, certainly an old design but built for speed. The biggest drawback of old boats is the small cockpit size. They're hard to get in and out of, thus not as safe in ww. Make sure to check out their walls or pillars or lack there of. I've got a perception mirage still- its like paddling a pencil and I use it as a crossover boat. I started kayaking in a phoenix slipper, a lettman, a riverchaser, and a mirage. I'm not pinin' for the good ol' days but in ww those boats would now be considered "speeders" and "they can all hold a line". So "learning to paddle straight" is dependent upon your point of view. I could see folks wanting to use them for attainments now a days.

The brand
was Dimension which was bought by Oldtown. How do you post pictures?

I’m considering buying one of these quite cheap with paddle, spray skirt and cockpit cover, but you guys don’t make it sound too worth the 280 mile round trip to go get it. I’m 5’6 and 165 lbs. My main concern for fit is getting in out of the cockpit. I most likely would wouldn’t venture above class 2 rapids in central IL in this boat, if I should make the trip to buy it. I’d be spending about $42 on gas, which is almost as much as the boat costs.

I have one of the old Phoenix 13’ whitewater boats, I don’t remember if it’s a Slipper or an Echo, but I find it quite fun and amusing to paddle, even on a lake. I use my paddle set to 205cm. The front deck on it is pretty flimsy when I strap it on my roof rack upside down it dents. It weighs less than 30 lbs, which is a major attraction to it.

I owned one in rainbow colours for a few months. I don’t do whitewater, but if you’re into slow rivers and touring I’d listen to all the negative things already mentioned here!

There are much better boats to be had, and many of them around the same price.

I don’t see many kayaks with paddles, cockpit covers and spray skirts in my neck of the woods. 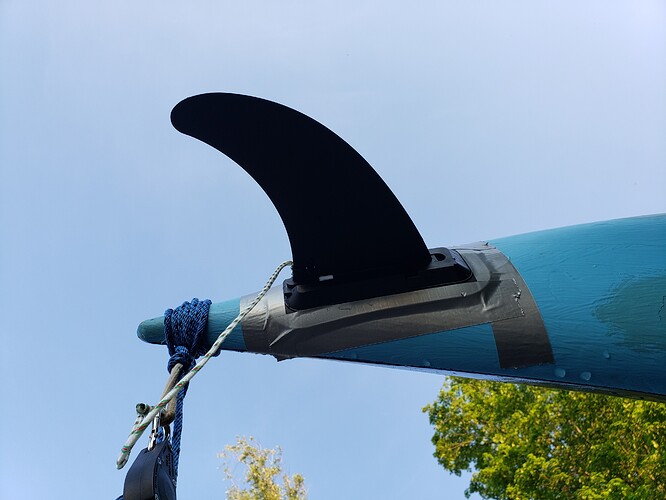