When I used to have a sedan, I simply put a towel on the trunk and rest the bow on the towel, walk to the stern and start pushing it up to the saddle. That worked quite well for years.

Now I have a SUV, which is a lot higher and have a spoiler thing that looks a bit flimsy. I bought a roller loader thingy thinking that should help getting my boat up on the saddle. But I’m having more trouble than I bargain for…

Unlike the towel which has enough friction for the bow of the boat to sit quietly there while I walk back to lift the stern, the roller rotates freely in both directions. So when I rest the bow on the roller, it wants to slide back down!

My boat is long enough I can’t reach the stern without letting go my grip at the cockpit near the mid-section. So it’s a struggle to stop the boat from sliding back. The height of the SUV’s roof didn’t help either.

So, roller loader owners, does this happen to you? Or am I doing something wrong? Is there a trick to stop the boat from sliding back while the bow resting on the roller while I reach for the stern?

You could run a line from the stern up and hook it next to the roller. Maybe a cord with a short bungee on the end.

I’m not sure I’m correctly envisioning what you are doing. Is the stern not resting on the ground? The idea of these rollers on the back window is that you prop the bow on the roller while the stern is on the ground. The kayak should rest there without hands on it. Then you lift the stern from the ground, and roll it onto your cradles.

The stern would slide backward on the ground. Then the bow would be in danger of falling off the roller.

Ah, I see. I’m not sure if this would help with your boat and car geometry, but I carry an old yoga mat and rest my kayak on that when I need to load/unload, because our boat ramp parking lot is all gravel. The mat is sticky and it helps keep the boat where I put it.

I do a similar thing, but use a rubber backed bath mat instead of the towel. Depending on the consistency of the ground sometimes the boat will try to slide. I just “walk” my hands down the boat from the cockpit to the aft deck rigging until I can pick up the stern. If your kayak does not have full perimeter lines this could be tricky.

I fiddled with the roller thingy for a bit more. Then I realized I don’t really need it!

I simply rest the front part of the boat on the spoiler high enough that when I walk to the stern and pick it up to about head high, the bow drops into the rear saddle (Thule Deck Glide). As such, I can start pushing the boat forward without touching the rear spoiler of the car. So the flimsy spoiler doesn’t get stressed much at all.

The roller thingy needs a clean surface to attach itself too. I’m worried that if I’m not careful in preparing the surface to make sure it’s secure, I have a much bigger problem of it slipping and dropping my boat to the ground (not to mention scratching up the car).

As I don’t seem to really need it anyway, the tradeoff is not quite worth it.

I use an Amagansett Roller Loader that I got years ago. It works thru multiple cars with increasingly big spoilers. Mine has suction cups which affix it to the rear hatch window below the spoiler, clips which go in between the spoiler and the main body of the car.

But I never, ever let go of the boat once I have it propped with its bow in the roller. I use deck lines to hang onto it while I move to the stern.

I learned the hard way some years back. For a 16’ boat, hand on the rear deck line is not enough leverage to hold the bow off the ground!

(try it, try to lift the bow off the ground using only the rear deck lines)

I can see bigger roller being better though. The one I tried is so narrow the boat want to drift off the side too.

But for now, I think I’ll experiment without rollers. If I detect any deformation of the spoiler, I’ll try some bigger rollers.

A bit on the expensive side, but Yakima and Thule among others sell a rear load assist bar that can be extended past a spoiler or other things the interfere with rear loading.

I personally don’t like the roller systems like the Yakima HullyRollers or HandRollers. The don’t offer enough lateral support and I have seen too many people, especially at the end of the day when they’re tired, miss the front saddles and have the kayak fall off the side of their car. Kayaks slide just fine on most saddles if loading from the rear.

If l said l lifted the boat off the ground using only deck lines l missed it.

What l said was that use the deck lines to hold the boat in place while l move to the stern.

AFTER l have the bow in the roller loader. Which l do the normal way - heave ho the bow and in between the rollers.

At the stern of the boat l lift it up and slide it the rest of the way.

Some saddles fail to slide, which is a PITA. I glued felt from a Joanne’s fabric store to my saddles in the rear. They slide great now. Don’t know how long it’ll last before have to do it again but a pretty cheap solution.

Yakima Mako saddles use to have optional custom cut adhesive felt pads. Now they come with them.

I used to have Saris racks, the saddles grip like tiger’s claws!

For loading, I threw a plastic bag over the saddle, which makes the saddle rather slippery! After the kayaks were on top, I just pulled the plastic bag off the saddles. The saddles then grips the boat like… tiger’s claws!

My front and rear saddles are identical Thule’s so I had the same problem with the rubber traction. 2 carpet runner “oven mittens” to cover the rear saddles, make sliding up the kayak easy; the mittens are then removed before securing the kayak. I still have to use a slide extension to avoid damaging the rear spoiler of my RAV4.

" I still have to use a slide extension to avoid damaging the rear spoiler of my RAV4."

I purchased a Thule Slip Stream 15 years ago - years later I saved the rear saddles & frame that I put underneath the rear crossbar and hang over the rear of my car roof & spoiler. I place the bow in the old felt covered saddles and push the kayak up into the saddles - the heaviest craft I used this with was my former Pungo 140.

One like this. similar products are available by different rack manufacturers. 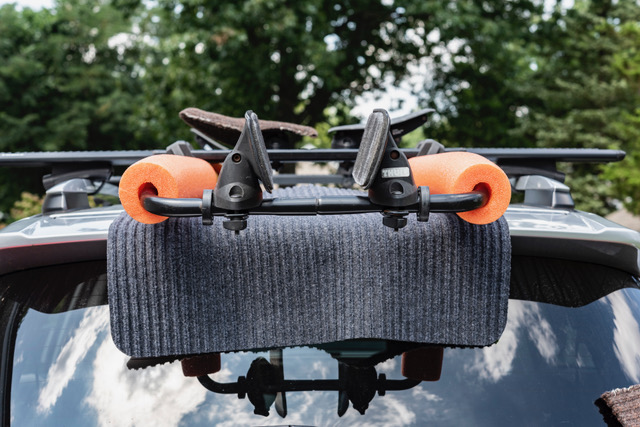 So my frozen Slip Stream has served well as a slide for over 10 years. 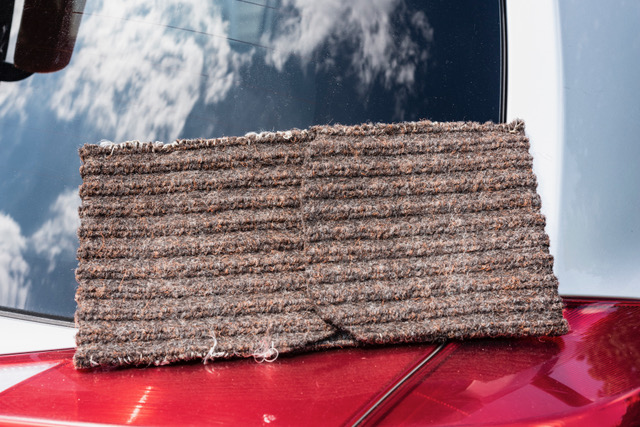 The carpet "oven mitt’ lets the hull slide up easily.
Once my kayak is car-topped, this slide with small saddles is stored inside the car.

That is what I do - thanks to the “skid plate” on the stern of the Wilderness Systems Pungo, Tsunami that does a good job of preventing slippage. I might purchased a roller accessory as my slide takes up room when stored inside the car.