I’m having some concerns about my rack and where the straps fall on my boat; namely, directly over the cockpit in contravention of the instructions. Here’s the specifics:
2020 Honda Pilot. The roof has a gentle curve toward the windshield and toward the lift gate
Thule bars set to specified 29 1/2 inches apart and the prescribed distance from windshield.
Hullavator: because the car is a bit taller than I can comfortably lift a 52 lb 17 foot long boat!
The boat’s cockpit is 38 inches long! That’s measuring from just behind and just in front of the coaming (the spot where straps would go). As a result, no matter how I load the boat into the cradles, a strap will have to go directly across the cockpit. The instructions say not to do this. I understand why.

I need, I think, the get the cradles further apart from one another but not sure I can do that and keep the feet on the roof as designed/specified in the instructions.

Any thoughts? Would I be in the same predicament (running strap across cockpit) with traditional saddles, assuming crossbar spread is something I’m stuck with?

Thanks. I’ve been trying to sort this out for awhile and can’t see a solution. Might be a time-limited problem since the lease expires in Feb. but I don’t want to damage the boat in the interim.

Yes, I realized after I posted that the cockpit will always be in the “wrong” spot given the cross bar spread is shorter than the cockpit itself.

Still open to ideas. I can’t be the only person driving this car with a kayak.

Don’t sweat it. Provided you’re making the straps snug and not crushing you’re good on the Assateague. I’m not sure why Thule makes the recommendation.

Put a twist in any strap that crosses an open space to reduce vibration in the wind so as not to have an acoustic speedometer.

Have you tried running the straps immediately in front of and behind the coaming anyway, with the cockpit centered between the rack bars? That’s what I do. My cockpit is longer than the roof-rack spacing on my Yaris, but I’m not sure if my mismatch is as severe as yours.

The super-nice thing about bracketing the cockpit is that the straps restrain forward and backward motion of the kayak without having to be overtightened.

I carry a Eddyline Shasta Tandem with a 6 foot cockpit opening on Thule hulivators. Straps go over open cockpit with no problem. Just don’t over tighten. Then again Eddyline kayaks are very strong abs thermoform. Weight 65 lbs. Always use bow and stern straps.

My current car has flush rails so taking advantage of raised rails in not an option, though I did that before hitting the flush rail situation.

So I am thinking that for long trips you may be able to add a strap in front of the coaming on bow end, and behind the coaming at the stern. The second strap would have to go up after the boat is fully up. Which yes does make the Hullivator operation take longer.

I agree with karen2. I have a similar problem—rack bars too close together due to the curve of the roof. For my car, the manufacturer specifies the exact placement of the roof rack feet, down to the millimeter. In fact there are indentations for the feet in the roof, so no other placement of the bars is possible.

On my kayak the cockpit has enough of a lip on it that I can place the straps under the lip and the kayak is secure. The cockpit is about one inch longer on each end than the space between the rack bars, so this is not an extreme angle for the straps. In your case it sounds like your cockpit is 1.5" longer on both ends, which also doesn’t seem like a problem, as long as the lip on your coaming is pronounced enough to hold the strap under it.

It’s a bit harder to do this when using a cockpit cover, but it can be done.

It certainly also solves the problem of short roof, or curved roof. Drive a Z3 or Citroen 2CV? No problem!

Note, I had the wrong tongue on the trailer…too short…so the kayak is positioned incorrectly. The correct tongue is another 20" in length, which allows for proper positioning. 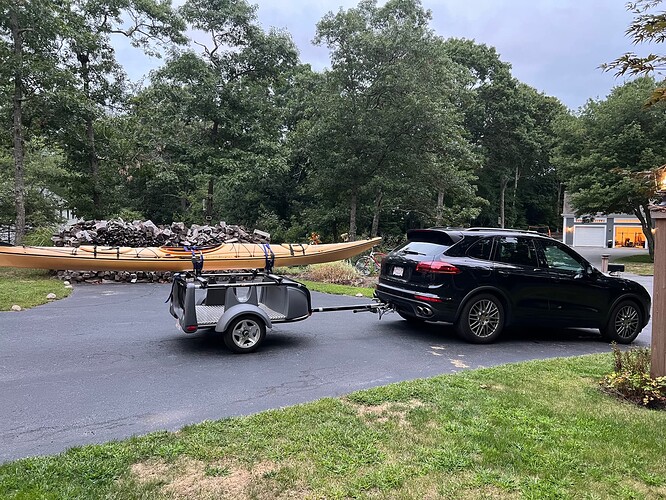 The thing I would fear with your setup is sitting at a red light and someone driving up on me. Your photo cuts the back off but I would be hanging a huge flag on it. Something to really let others know where the end is.

Agreed. I picke up a couple of orange flags to hang on the rear end of the kayak(s). I’m also concerned about people not seeing the trailer itself, or merging into my lane without giving room for the trailer. I’ve already added some reflective tape and am considering adding some white and red LED lights to light up the trailer on the sides… 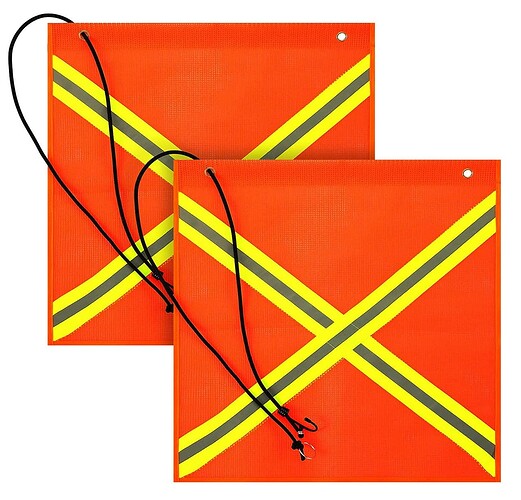 Looking at your car, it’s hard to tell why the kayak wouldn’t fit on the roof.

Kayak certainly fits…but I’m short and the roof is high. I mentioned the problem of “high liftover” in a prior post.

18’ skin on frame and 15’ rotomold atop a Thule rack on my short egg-shaped Mazda CX5. I drove this set up 1700 miles round trip that time and have used the same arrangement on many long highway drives. Helps that the SOF is only 31 pounds. Stern safety lines are clipped to my little aftermarket Class 2 trailer hitch and the bow lines are fastened to heavy webbing loops attached to large bolts under the hood.

Both coamings fit exactly between the Thule cross bars, which helps with mounting stability. I suspect this is more aerodynamic than carrying the boats upright. It only cuts my highway fuel efficiency about 2 MPG. 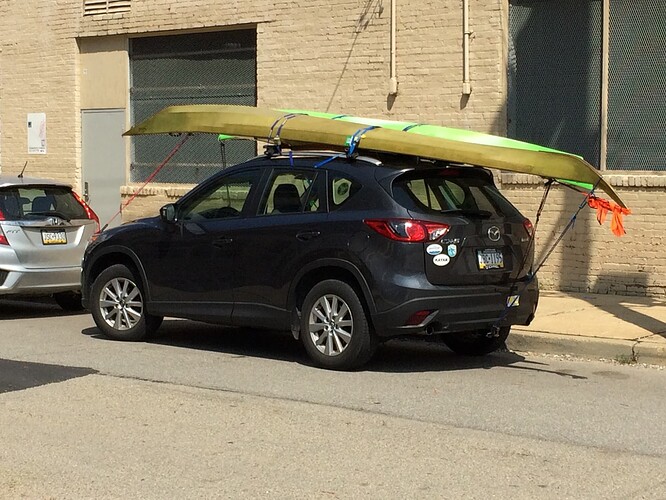 I have a set of racks on my ford Focus, the spacing between where the ratchet down cross bars is 28", which I feel is way too narrow for haluing a 17.9ft kayak. My carrier attached to the cross bars is a edge carrier, holds two boats, keel to keel.

for longer hauls I will put a fore and aft line (if the boat is on the driver side of the car.) from the passenger side. This pulls the boat into the upright of the kayak carrier. (looks like an inverted “T” the carrier that is.) it also prevents the boat sliding forward or aft, and controls the bow / aft bounce on rougher roads. worked so well it has served me in driving from PA to FLA to see the manatees.

it would be even a more secure method if the focus had a rail system that mounter the cross bars more firmly that you get by ratcheting them doing using the door sill hooks.

as long as the boat is balanced on the rails (equal weight fore and aft rails.) where the cockpit is really does not matter.

when mine is set up, the loop finds it self on the back end, just behind the cockpit, but on the front side it is about 4" behind the combing on the front. So really I wouldn’t worry about it especially if you have a bow and aft line as well.