First off, thanks to all the active posters on here, I’ve already gleaned a lot from your advice. I have a 1995 Royalex canoe (Mohawk Nova 16) that had worn almost through to the ABS foam in the stern and the outer vinyl has delaminated from the foam over an area about 18" by 3" I used an exacto knife and kept cutting back the outer vinyl until I got to an edge where the vinyl was still well bound to the inner foam layer. (see pic). 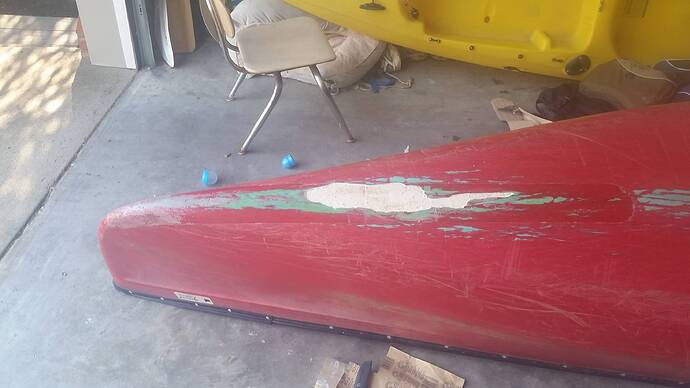 From reading through posts here I’d like to repair it with g/flex epoxy and use s-glass to make an abrasion plate for this area. which option would you all go with;

A. repair the area (where I have removed the outer vinyl) with straight g/flex, let it cure, sand, clean and then add skid plate using g/flex and s-cloth.

B Keep cutting back the vinyl outer layer to the desired skidplate outline then add skidplate directly to the ABS. (If I do this, how do I approach the edge work on the s-cloth and epoxy, i.e does it overlap onto the vinyl and if so how much?

C some other option

If you can remove the outer layer of vinyl from the area you plan to cover with fiberglass without thinning out the solid outer ABS stratum or gouging it up too badly, I would do so. Sometimes this can be accomplished fairly easily using a sharp wood chisel. Thin remaining vinyl fragments can be trimmed off with a sharp knife or sanded off. If you can bond your glass directly to the ABS the repair will be stronger than if you bond to the vinyl, although bonding to the vinyl with G Flex will work. The bond of the fiberglass to the ABS if done correctly should theoretically be stronger than the bond of the vinyl to the ABS of the Royalex.

I would start by covering the exposed core with a layer of G Flex thickened with some silica powder (cab-o-sil) to seal off any open interstices. Make sure that there is not a lot of solid ABS that has delaminated from the core and is overhanging the core in such a way as to prevent you from getting your epoxy to fully cover the foam core. If there is, you may need to debride a bit of solid ABS.

After letting the epoxy cure at least to a green state, make a template of the exposed core area out of packing paper or something like. I would cover this area of core with at least one and possibly two layers of 6 oz/sq yd fiberglass before putting on your abrasion plate. This is basically to replace the outer solid ABS layer that has completely worn away. Use your paper template to trace out the pattern on your cloth. If you use multiple layers, cut the patches out on differing biases. After the epoxy cures, you can sand this area flush and fair with the areas of hull where the outer ABS is still intact. The idea is to rebuild the outer solid structural layer of ABS that has gone missing, and to fill in the resulting void until it is up flush with the adjacent hull. You could fill in the void using only thickened G Flex, but adding fabric will make the repair much stronger.

When you cut out your abrasion plate, it will lay around the curvature of the stem more easily if you cut it so that the long axis is at a 45 degree bias to the weft and warp of your cloth, and the edges will fray less. I would make the abrasion plate large enough so that it overlaps the area of damaged ABS by at least 1" in all directions, and 2" would be better still. The abrasion plate need not extend onto vinyl if you have been successful in removing the outer vinyl from the area you wish to cover with the plate.

Here is a long thread on another forum regarding abrasion plate application to Royalex and composite canoes with a lot of application tips. Unfortunately, because of the photobucket shenanigans, Mike’s photos no longer appear, but mine do.

Carefully masking off the area around your abrasion plate will not only prevent inevitable epoxy drips onto the hull, it will also make it much easier to wet out your cloth without distorting the weave of the fabric.

Thanks pblanc. That gives me a good game plan. Looks like I will end up shaving off a good bit of the vinyl. I had a keel ez strip on there that I had to pull off. It’s easier to shave off the vinyl than to try to get that glue residue off of there. I am waffling between using the s-glass or dynel. Either way I’ll post how it comes out, unless of course I totally screw it up.

Dynel and S fiberglass both make good abrasion plates. Dynel may have a slight edge in abrasion resistance, but S 'glass is definitely stronger.

In this case, your goal is not simply to protect the hull from abrasion. It is also to restore lost structural integrity. For that reason, if you are only going to use one type of fabric, I would opt for S 'glass. An alternative would be to patch the worn-through area with S 'glass and then cover the repair with an abrasion plate of Dynel if you don’t mind using 2 different types of cloth.

Dynel is much thirstier than fiberglass and the fibers soak up a lot more resin. When using G Flex (which is rather more viscous than conventional epoxy) with Dynel, make sure that the fabric is very fully saturated when you wet it out. One layer of 5 ounce/square yard Dynel when fully saturated will wind up being almost as thick as 2 layers of 6 ounce/square yard plain weave S fiberglass, or about as thick as one layer of 6 oz glass and one layer of 4 oz glass.

Finally got around to performing the repair work on my canoe. I pretty much followed the advice above and the directions laid out in the canoetripping post,

Takeaways;
The Gflex, even the regular stuff in the the bottles was very thick. Would have been nice to cut it with something thinner to make sure I got a good soaking into the cloth.
I didn’t splurge for the graphite because the place I ordered everything only had 16oz cans. I tried some graphite lubricant from Lowe’s, the kind you squirt into locks. It didn’t really work that well, or I didn’t add enough. At least I lubricated my garage door afterwards.
I had a little trouble with the peel ply. not sure if I put wrong side down or pulled it off too soon, but it pulled some gflex coating with it in a couple small areas. Also the peelply came folded and the fold lines impressed themselves a little into the skid plate. 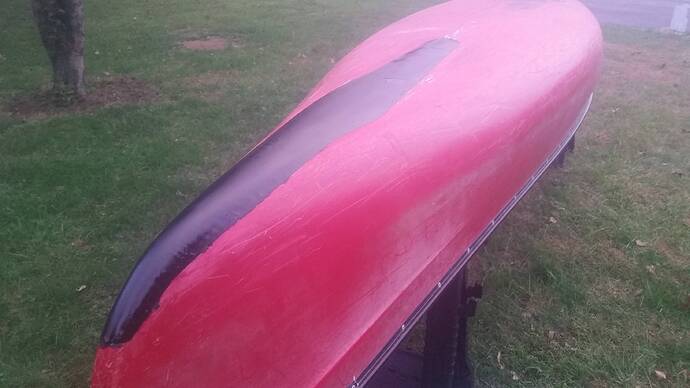 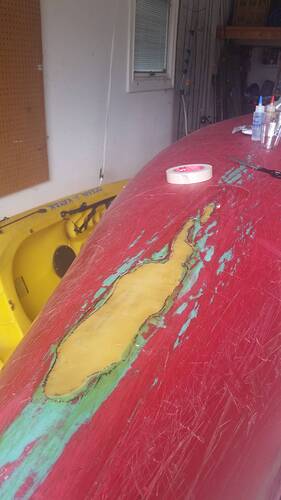 Looks pretty good. Some material that is sold as peelply is untreated nylon cloth. This has to be removed before the epoxy cures completely while the epoxy is still “green”. If you start to remove the peelply and you start to lift the underlying fabric, just smooth it back down with your squeege and wait longer. Treated peelply is often sold as “mold release fabric” and that can usually be left on until the epoxy is nearly completely cured. The treatment may give the fabric a distinct color, such as blue.

Creases in peelply can generally be delt with be applying a bit more epoxy over the peelply and repeatedly smoothing the fabric down until it “sticks” . You may have to repeat this a number of times until the epoxy cures sufficiently to hold the smoothed fabric down.

G Flex is rather viscous and I would always use unthickened G Flex to wet out fabric, as you did. The viscosity is quite dependent on ambient temperatures. The viscosity can be diminished by warming the mixed epoxy a bit before you apply it and you can also carefully waft a heat gun over the surface after you apply it. Warming the hull surface a bit before application also helps. I always apply some epoxy to the hull surface before I lay on any fabric, and am careful to apply enough epoxy over the fabric to fully wet out the cloth. Dynel especially is very thirsty and using G Flex it is not difficult to wind up with epoxy starved sections of fabric that could later delaminate.

You can’t thin G Flex with any solvent, but you can mix it with conventional West Systems epoxy such as their 105 resin and 205-206 hardener in any proportion desired. The conventional epoxy is much less viscous, so the result will be a less viscous epoxy. I suspect that you could use other conventional epoxies other than West products, but I have never done so and I’m sure that West Systems would not guarantee an adequate cure or bond.