I installed a new Brunton 70p dash mount compass on my Greenlander Pro three years ago. Recently I noticed it’s starting to rust in the center causing a light brown haze on the inside of the dome. There are no cracks in it, no air bubbles nor any leakage of liquid from the inside. A paddling friend of mine has the same problem with his 70p.
Even though the warranty ran out two years ago, I emailed Brunton but never received a response. I haven’t removed it as I am using it until I purchase a new one. Anybody know what caused this to occur and how I prevent it when I install a new compass? 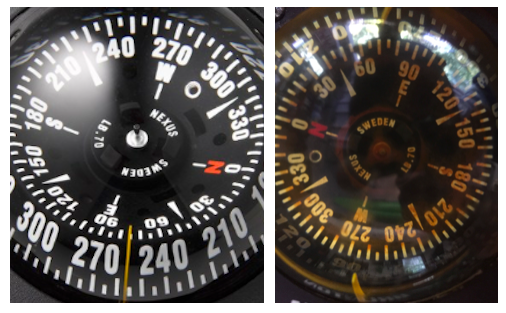 On my GPS, occasionaly I’ll have a few spots of water under the screen, and then they disappear. I attribute it to going from cool to the very hot Florida Keys sun.
Could that be the same ?

Was it lighted?
Anyway to drain it and refill it?
I had a side door mirror turn half brown due to the oil that dimmed it.

I don’t believe that is the issue as the metal center of the compass is rusty and the rust color on the plastic dome is there 24/7 regardless of the temperature. Plus any water that entered the compass would form a bubble as (from what is posted) the liquid inside the compass is mineral oil which is not soluble in water.

Maybe UV got to it?

From posts I’ve read on this site from 2010, there is a way to drain and refill with mineral oil. I’ll give that a try.
https://forums.paddling.com/discussion/1354299/replacing-compass-oil

Don’t believe it’s UV as I use 303 on it monthly, keep it stored in my garage and you can see rust on the metal in the center of the compass.

I just drained. the “oil” from my compass - the fluid that came out was cloudy and contained small solid pieces. The lens is clear so all I have to do is refill it and it’s good to go.
The only problem is what to fill it with. I’ve Googled it and find everything from white spirits, mineral spirits, Johnson’s Baby Oil, vodka… so I emailed Brunton and asked them. I hope I get a response.

My 13 year old 70P has been getting increasingly amber. Will remove and see if it drains like yours and will try the Richie route.

The fluid that’s in them is mineral spirits, a.k.a. “Odorless Mineral Spirits”, “OMS” or “Paint Thinner” (**NOT **lacquer thinner) in the US. You can find it at any hardware, paint or big-box store.

I’m surprised that Brunton didn’t get back to you, as they replaced some old Ritchie 70P compasses for me a few years back. They seemed more interested in maintaining their reputation for top-quality products than in any warranty limitations.

I looked into the “Isopar L” fluid that West Marine is selling and it appears to be a truly odorless solvent (OMS still has a significant odor) that’s much more expensive than OMS, but is compatible with it. I always have OMS around for other purposes, so I don’t see the point in spending $16 on a pint of special fluid.

Aircraft compass oil…
Not sure what it is but the price is right…
https://www.aircraftspruce.com/catalog/inpages/repairkit1.php?gclid=Cj0KCQjw4qvlBRDiARIsAHme6otOCPjVIuWM-JfjoVj87QKx4XY8mdzEhJ78Psl8DXvLtyK7ZuGLXIcaArXDEALw_wcB

Thanks bnystrom. I purchased odorless mineral spirits at Home Depot and it smells identical to what I drained out of the compass.
Brunton used to replace their compasses regardless of how old they were, but they now have a one year warranty. They have not replied to either of my inquiries.

I received the following reply from Tyler at Brunton today:

_Hi,
That is definitely strange, and honestly a somewhat challenging question, but we will certainly try to help. However, I would probably suggest also checking with Nexus. We used to have a partnership with them, but we didn’t manufacture the 70P in our factory. Also, the fluid we use in our compasses is different. Brunton uses mineral spirits, but the 70P uses mineral oil as the dampening fluid. But, I did still try to investigate a bit just now by dismantling a broken one I had around, and I’ll be glad to share what I found. I can say that the pin in the center isn’t aluminum. I checked one with a magnet just now and it responded, which makes me think it’s probably steel, but even so the oil should still have prevented rust. Since there isn’t a bubble to indicate a leak, that makes the situation somewhat mysterious. If I had to venture a best guess, I would think possibly a fluid exchange might have happened at one point, allowing oil out and water in, but in that case I would really expect a bubble to be present; if not right away, one that would develop over time. It’s also not a very plausible situation unless the compass was submerged in such a way to expose the underside to water where there’s a screw that may have been loose breaching the seal. I expect you can imagine how unlikely that would be, though; something like an extended tip-over without a skirt installed maybe could do it, but not anything that would be very normal. However, as implausible as that it, it seems logical that there must have been exposure to something that would allow the rust to form. It’s just hard to imagine a simple scenario where that would happen. Again, fluid exchange would be my best guess. With that removed from its mount, you could squeeze the two halves together looking for any leaks. After doing that, if you can feel an oily residue anywhere on the outside of the compass, that would confirm a breach of the seal.

By the way, I also checked back through our return history for that item looking for any similar claims. We did have one from December of ’16 that reported a discoloration, but unfortunately doesn’t show in detail whether or not it’s the same thing you’re seeing, and I didn’t personally process that one so I don’t remember it. I’m very sorry we’re not able to provide a definitive answer, but hopefully if you contact Nexus they will have some more information.

So the mystery continues…
I was able to drain the compass, filled it half way several times with Odorless Mineral Spirits, shook and drained to get out all the contaminated material, then refilled with OMS using a 10 mL syringe and thick needle. Took half an hour just to get any air bubbles out but it’s now good as new.

I am surprised that Brunton only knows of two instances where this happened.

Given the look and the model number of the Brunton 70p, I assume that it is a rebranded Silva 70p, also known as Garmin 70p (another rebranded version). I have seen several Silva 70p with the same brown discolouration.

It doesn’t seem to be an uncommon occurrence, that’s for certain. I don’t think it’s actually rust, as there was no indication of discolored metal in the compasses I’ve seen. I suspect that it’s probably something else caused by UV or just plain old sunlight. Perhaps there were impurities in the fluid or something in the plastic of the dial. Who knows? The important thing is that it’s pretty easy and inexpesive to fix by draining, rinsing and refilling the compass. I also think there is some confusion about “mineral oil” in these compasses as I’ve never seen one that didn’t have “mineral spirits” in it (a.k.a. “OMS” or “paint thinner”).

I did a flush and refill on my 13 year old compass yesterday. I used an epoxy syringe by Gougeon Bros as found at West Marine to fill. It has sufficient volume for quick refill and narrow enough tip to fit in screw hole let air to be expelled. The top of pivot post still has superficial rust and the red letter N is now light pink. I directed compressed air flow across drain hole (at 6 oclock position) to pull out all original fluid and contamination.

I do need help finding a gasket to seal screw as my original one disintegrated. I tried the smallest o-ring I could find but its OD is too much. I am tempted to just seal over inserted screw with Aqual Seal or other product if it can hold against OMS. Any wisdom on that match?

It did occur to me yesterday that if shipwrecked I could use compass fluid as fire starter.

Might try “Liquid Tape” over the screw. I use it on my garden light connections… survived 4.5ft of saltwater.