Does anyone have any experience with safety flares for coastal kayaking? What is recommended, aerial or handheld?

If you are paddling at night

in the ocean you must (pretty much) carry three aerial flares. @$18 for three

If you life is depending on them you'll wish they were pain wessex parachute flares $$$$ $36 each on sale. really a must if others are counting on you (though I do not know a gude who has popped a flare (that I know of)).

Hand held flares might be useful but I do not carry them. I do carry a strobe every ocean trip and usually a good led flashlight too

flares
Handheld flares are cheaper, but I wouldn’t want to bet my life on something that can’t be seen very well from a distance due to the fact that it’s in your hand at sea level. If you’re in chop, swell, etc. this low visibility of handheld flares may become a greater issue, as kayakers sit so low in the water. Handhelds are probably better suited to yachts, etc. with higher deck where a person can hold the flare much higher than in a kayak. That being said, a handheld flare is better than nothing…I use them to start fires when kayaking camping…no, just kidding; they are better than nothing and may deserve a place in your signalling repatoire. (The most important thing to have is a submersible rated marine VHF radio that you know how to use and that you will use before your fingers are so numb that you can’t. Of course, don’t allow yourself to get in the position of ever needing to broadcast a MAYDAY in the first place. 406 mHz EPIRBS with integral GPS are a good backup to the radio.)

Aerial flares can be seen from much further away than handheld flares as most launch somewhere in the range of 500-1000’ and burn from about 10-40 seconds. A big parachute flare costs a few bucks, but what is your life worth at that point? Compliment that with several Skyblazer (the name Skyblazer will set off an unintended debate I’m sure, but I have yet to have one not work after years of unprotected saltwater immersion and being past date–is there something better?) flares that you should keep in a PFD pocket (if you’ve drifted away from your boat and don’t have flares on your person, not to mention youre marine radio, your pretty much toast in the 50 degree water) along with some kind of smoke indicator or water dye indicator or a handheld flare to help rescuers hone in on your position.

In general, shooting off a flare without another boat in sight isn’t a good idea. But if that’s the option presented, you go with what you have–shoot the big parchute flare off first to attract the most attention ASAP. Just one flare should be launced at a time, not three as is sometimes thought. Anytime a flare is seen, the mariner that observes it should, by law, do what they can to help the situation. This may not be much in a kayak. All you may be able to do is get on your marine radio on Ch 16 and listen to see if there is any chatter regarding the flare you saw. If not, try to contact CG or any boat in the area and report what you saw and the position as best you can.

Alot of folks die every year because they haven’t learned this stuff or don’t want to spend the money to be properly outfitted. I kinda look at it from the perspective of how much would you be willing to spend during those moments you’re in the water, a number of things (judgement, skills…) have failed already, the boat is perhaps floating away and hypothermia is setting in (this is where you pull out the Sea-Seat from the pocket on the back of your PFD, inflate it and get out of the water). If you still want to have options at this point, you learn and buy this stuff and keep it in good operating condition.

on flares not working

Orion star tracers were simpler, better (but less compact) and more reliable but orion bought the skyblazer's manufacturer and does not make star tracers any more.

Lots of my friends were doing a (USCG approved)demo of just out of date skyblazers with results that were dismal. Lots of them did not work. we pay much more attention to keeping them in sealed up bags. Some of es even bought bag sealers (seal a meal?)and have tested ripping the bags with our teeth in case of emergency.

For the recommendations and for not ragging on me for mispelling flare...I will exchange the hand held flares for aerials today!!

Don’t get rid of the handhelds.
They are used in conjunction with the areials. First get the attention of a rescuer with the aerial, then the hand helds will burn for a much longer time and can be used to help them keep you in sight.

Save the Teeth
I believe it was the most recent issue of “Sea Kayaker” which showed a flare enclosed in a “seal-a-meal” bag with a common roofing nail. Nail is your bag opener thus saving you frn fumbling with a knife or having to use your “pearlies”.

When Orion bought StarTraser…
…they upgraded the performance of their SkyBlazer flares to that of the StarTrasers. The advantage of SkyBlazers is a more compact package with an end cap that won’t fall off. I can’t really compare their reliability, but I’ve never had a failure with either on.

Handhelds are nearly useless…
…in anything other than calm conditions. Try holding one while struggling to keep your boat upright in rough water and you’ll see. The other downside is that they drop extremely hot material as they burn. It could easily burn right through a kayak hull.

A battery powered strobe is a better and more useful item. Add a few Cyalume sticks, if you like. According to the local C.G., Cyalume sticks are very visible from a helicopter.

Orion 12 Gauge
I exchanged the hand-held flares this a.m for aerials - The Coast Guard recommended flares when they pulled me over last summer - Between checking me for warrants and warning me about the approaching hurricane, I just forgot to ask them any questions. Everyone, thanks again.

Thanks goood to know about the
upgrade. Specs are even higher than the star tracers ever were. Looks like the only advantage the tracers had was simplicity so I’ll not mourn the change.

I thought you were at the demo with the USCG where alot of old pencil flares failed Am I wrong.

Laser Flare
I just started handling Lasser Flares at the recommendation of fellow paddlers. Manufacturer claims range of 20 miles. You can check them out at www.secondwindsports.net/products i would love to hear from anyone that has used them.

Not all emergencies involve rough
water.

A handheld smoke can be a very visible device if you have a paddler who just had a heart attack or some other medical emergency.

As you point out, they do have to be held outside the boat, but during the day they are extremely visible.

They don’t eliminate the use of radios, signal mirrors, or aerial flares, but are a nice addition for when the conditions warrant. If the water is too rough to be able to use a handheld and stay upright, you’ll have the same trouble shooting an aerial flare off.

That is what a paddle float
or better yet friends are for.

Wait, what is this Sea-Seat you speak of?

At one of our annual classes we secured permission from the relevant authorities to test areal flares. We bought some flares and people could bring their own. The Skyblazers had a dismal record of failure regardless of how they had been stored or how old they were. I switched to the Orion 12 gauge flare pistol. In subsequent classes I had no failures of these stored in a drybag that were close to ten years out of date. I still carry expired flares in addition to the current ones because they take up little room and if you need flares, you can never have too many. With flares, you need at least three.

At times we have had the large parachute flares. The are damned impressive and can’t be beat for visibility, but also damned expensive and a bit bulky for a kayak. Remember that aerial flares are only USCG approved for 42 months from manufacturing date. Check them when you buy them.

Hand held flares are not only less visible due to your being so close to the water, but they tend to rain flaming embers down on you and your boat. However, setting a fire on your deck is a valid USCG approved nighttime distress signal.

There are a couple of approved electronic USCG approved nighttime distress signals available, but they tend to be a bit bulky for use on a kayak.

Laser type signaling devices show a lot of promise, but as far as I know, none of them are USCG approved to meet the nighttime distress signaling requirements.

Now I need a bat and a really big nail…

It has been 16 years since I purchased my Orion flare pistol…still has not been fired. 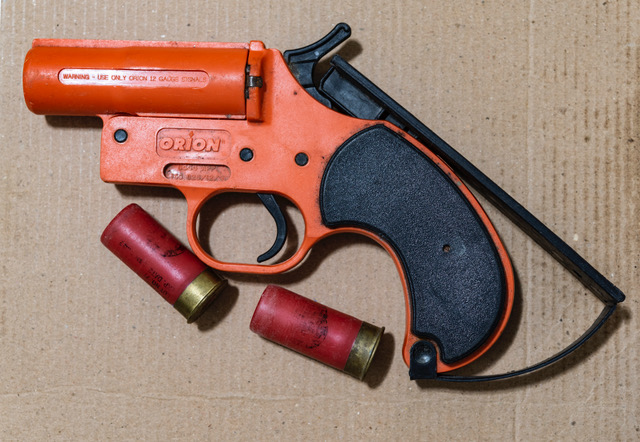 Agree with rstevens that the 12 ga Orion flares are easiest for a kayaker to carry, use, and visibility coverage. Make sure you have some which are not out of date while you are on the water. I also carry an electronic USCG approved nighttime distress signal despite it’s size and IF you choose to go this route, make sure you also retain a day distress flag (it came with the electronic night distress signal).

When teaching trip leader classes, it is always a highlight for students to demonstrate various flares using out-of-date flares. Should you test flares, be sure to coordinate with local USCG and marine authorities - the VHF wakes up quickly with flare reports always happening despite me giving VHF notices immediately prior to sending flares up.