I’m looking into purchasing either a Sawyer Charger or Sawyer 222 cruiser and would love to hear advice and comparison from anyone who has paddled both of these boats.

If I remember correctly (it’s been many years) The charger will be faster and smaller volume than the 222. If you plan on carrying a lot of gear I would pick the 222… if you want to cover miles you can do it with either but the charger would be quicker. Been quite a while since I’ve paddled either and there are some Sawyer gurus on here that will chime in with more/better information.

Baja,
The Charger was my all time favorite canoe after owning many of them. It has speed due to length at 18 1/2 feet and only a 34 inch beam. The bow has some flare to deflect waves. It is a deep boat around 15 inches. I used a Charger to paddle the biggest river rapids in my life. It holds a lot of cargo. The old advertisement showed 2 guys after a successful moose hunt. The McGuffins paddled a Charger across Canada.

The 222 is the updated version, a slightly more modern design. I have never paddled one. You are trying to decide which car is best a Ferrari or a Porsche.

Ppine…did not remember Charger as being so deep…swiss cheese memory I guess. Thanks.

I thought we’d hear from ppine on this one. I remember seeing elsewhere that he was a fan of Chargers. I’ve got a fair amount of seat time in a 190 Cruiser, which I liked, but not a 222. The 190 could be a wet ride for the bow paddler with some waves, but not terrible.

I’ve attached the Sawyer catalog pages for the 222 and the Charger if that helps. 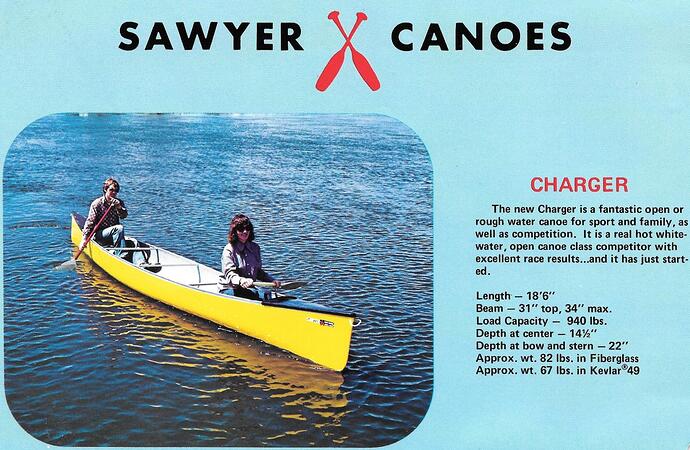 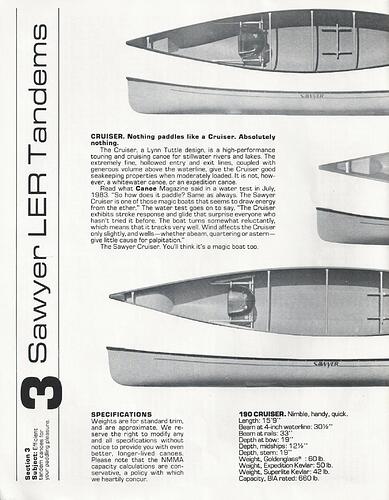 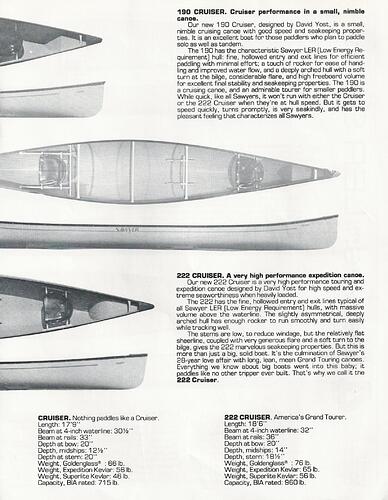