Scary incident in Turks and Caicos

Hello. My wife and I rented a tandem SOT kayak from Las Brisas in Turks to cruise the Chalk Sound. Unbeknownst to us, the kayak was missing it’s rear hull drain plug. It had ten scupper holes that were also unplugged. Twenty minutes into our tour, the kayak hull had taken on so much water that it began to sink and we had to bail out.

Fortunately, we are both physically fit and the Chalk Sound is relatively shallow. I could reach the bottom. My wife could not. She swam the better part of a mile back to shore while I pushed/tugged/yanked the kayak ashore. The kayak had life jackets but we were able to get ourselves and the kayak ashore without relying on the life jackets.

When we got back to shore, two waiters and I heaved the kayak aground and lifted the bow so the water in the hull could drain from the aft open drain plug.

Afterward, the manager at Las Brisas was “too busy” to talk to us. We were charged for the rental with no accountability for their negligence.

As obnoxious as her refusal to give a refund is, I’m more concerned about the safety implications of renting unseaworthy kayaks to tourists.

We will post on TripAdvisor and other sites, but is there any advice on how to make sure Las Brisas addresses this situation before someone drowns?

The pic is of our kayak’s missing drain plug. Their other kayaks had plugs, though one was a wine cork. 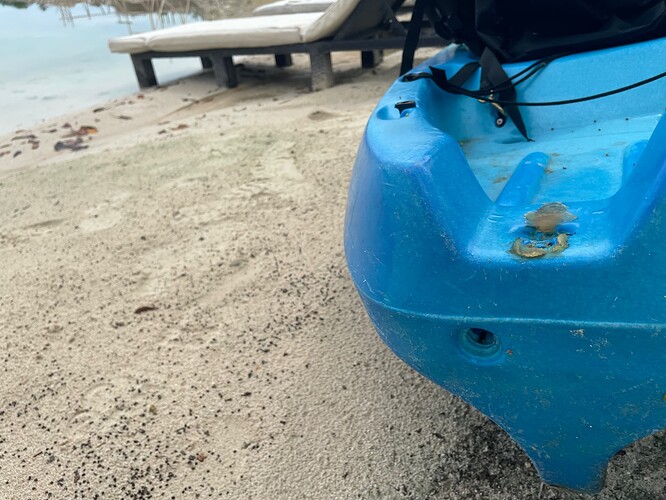 Probably not, other than roasting them on travel sites at every opportunity. However it does prove a great example of why places like this shouldn’t offer stuff like kayaks and parasail rides. Its pretty obvious that they don’t maintain their equipment. I would consider gear at resorts about the same way I do traveling carnival rides.

A good cautionary tale.
I was in Jamaica once with a boogey board. We had hired a guy with a diesel VW bus to shuttle the family around. I asked him about good beach breaks. He took me to place with a gorgeous 4 foot wave with off shore winds. After riding it a few times, my leg hit some steel and I realized I was boarding on an old ship wreck mostly covered in sand.

My brother was body surfing off the Coast of Senegal. The locals warned him that it was a dangerous coastline. He was a competitive swimmer for years. The closest he ever came to drowning.

Snorkeling in a lagoon on the Coast of Hawaii the Big Island, the tide changed and the inlet to the lagoon was running about 3 knots out to sea. We had flippers and were able to overcome the current by swimming around it.

This is a big reason why I have always owned folding kayaks that I could take along with me, even on airline trips. Besides the cost and time savings of having your own paddling kit, there is the safety aspect. I have a rolling duffel that contains a 12’ light touring kayak, paddle and all the clothing and gear I need to wear and even haul it (inflatable roof rack for the rental car.) It weighs 48 pounds. Even have a 16’ sea kayak that packs down to under 40 pounds.

I would not pay for that experience. No way

If you paid by credit card contest the charge with your card issuer. You did not receive the service/merchandise you were charged for.

Yes, I would contest the charge on your credit card. Maybe hitting the bottom line of the rental place would make them pay a bit more attention (probably not, but might as well try, and I certainly wouldn’t want to pay for such an experience).

Agree on complaining about them on all the travel review sites I could find - TripAdvisor, Yelp, Google, maybe some of the travel guide sites like Lonely Planet, Frommers, etc?

A friend bought a SOT at a garage sale. After paddling it 10 miles , she was really struggling. It was slowly filling.
We put it in the driveway and filled it. Never leaked. Never paddled it again.

Horrible and irresponsible service by the rental company. In addition to contesting the charge, you should contact the Turks and Caicos Tourism Bureau and voice your opinion there. Link provided below.

I do have to ask, though: why were you not wearing your life jackets?

Contact Us - Welcome to the Turks and Caicos Islands

Would have served them right if you just let the kayak sink where it was and left it up to the rental company to retrieve it.

Same thought occurred to me, but I bet such unscrupulous operators would have charged them to replace the boat.

Just one note, the point of wearing a PFD is not to enable better swimming but to keep you afloat so you can take more time if need be. Personally I always flip to my back to save energy, works in a PFD as well.

I have found that AMEX can be excellent at holding off a charge, if that helps. They are such a PITA to deal with that more often than not the offending party gives up.

I would have protested as soon as I left the rental place.

I keep wondering as to how many paddlers on this forum would have noticed anything and either brought a bottle of wine {in order to have a cork}. Or just said…give me something else.

Is checking out your ride for the day a thing? {especially if renting} or not?

I accept responsibility for not having fully checked the kayak. I am an advanced SCUBA diver who meticulously checks my equipment before going underwater but I admit that I am a recreational surface water enthusiast that takes surface sports for granted. Which is one of the reasons I posted here for advice.

I challenged the credit card charge. It is pending with Citibank.

I sent emails to the tourism board, government, and a note to Perception Kayaks, which was the SOT brand we rented from Las Brisas Restaurant.

I posted a review on TripAdvisor. The Las Brisas restaurant was able to have it removed. I posted again.

My wife is a former lifeguard and was on her high school swim team. I just retired from the military three months ago after 27 years of service. I graduated from SERE water survival. I have kayaked on excursions with people who don’t know how to hold a paddle. I have also kayaked on my own in the Atlantic, Pacific, and Indian Oceans. Chesapeake. Madagascar. With wild dolphins in Maui. We are leading a blessed life.

Based on how Las Brisas Restaurant in Turks and Caicos has neglected to respond, I’m not sure how to prevent them from continuing their negligent behavior which could foreseeably result in someone drowning.

Ideally we all fully check out any equipment we use etc.
But your typical tourist does not know enough to check for things like the problem you had. And that is what being a tourist is often about - access to recreational activities about which they are not knowledgeable.

You can do what you can do. You can be in a situation where you have useful knowledge and share it if you see risky behavior, whether or not the other party wants to hear it. You can sue a negligent property owner if injured basically for the purpose of getting them to improve their maintenance. I did once, the parking garage where I worked and I went down on ice.

But some aspects of the world are going to resist a fix.