As someone with lower back issues who finds it difficult to wrestle a canoe onto the roof of my car (or even onto a trailer), I’m always looking for an easier way to get my boat to the water.

A friend of mine pointed me to the Sea Eagle travel canoe. As a traditional canoe guy, I’m skeptical, but open to the concept. I know inflatables have improved over the years. The Sea Eagle weighs about as much as my Old Town fiberglass, but packs up into a much easier package that will fit in the back of my car.

No roof rack, no trailer needed.

Anyway, I’d love to hear from anyone who has one of these (or a similar make). Useability, durability, etc.

Look into PakBoat’s PakCanoes. These are a better option if you are looking for lightness and good performance. They have several model sizes and weigh significantly less than the Sea Eagle (which is 65 pounds). Their 16’ model, the PakCanoe 160, is only 53 pounds. Link below shows models and specs.

And PakCanoes will perform as well or better than a conventional hardshell canoe especially in wind and rough water – in fact they and the similar folding canoe models from Ally of Norway have been used for years by fishing and hunting guides for float plane trips into the Alaskan bush and other remote locations. You can find videos of them being used on white water. Last year I helped someone sell and ship an 18’ Ally folding canoe that was over 30 years old and still functionally solid. The buyers were going to use it to transport camping gear and supplies for a 6 week long kayak expedition in the Canadian Arctic.

I have owned 4 different models of Pakboat kayaks including their XT15 which used the same type of frame as the PakCanoes. These are durable boats that are very easy to assemble. You can leave them set up for the season and roof rack them for transport like a hardshell canoe.

If you want something even lighter, look at their PakBoat tandem kayak, the 15’ 6" Puffin Saranac, which can be paddled open like a pack canoe without the optional deck and set up as a solo or tandem by moving the seats. It only weighs 29 pounds, which is less than the average toddler and less than half the weight of that Sea Eagle behemoth. I have the solo version of the Puffin which is only 20 pounds and packs in a standard rolling airline bag with all the paddling gear I need with it and stays under the guidelines for “excess baggage” penalties. I flew with it to England a few years ago and paid no luggage fees.

There are 5 sizes of PakCanoes that run the gamut from flatwater to whitewater, solo to tandem and family fun to expedition ready. These high quality folding canoes have stood the test of time and are considered the best on the market. The first... 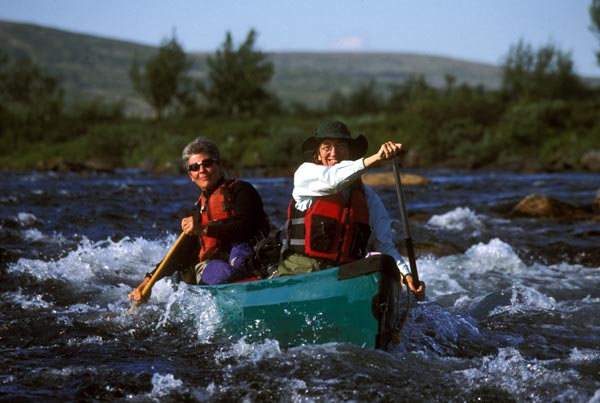 I have never had an inflatable or breakdown boat so really can’t comment too much. I just watched a couple videos and it looks like a pretty good process of blowing it up and once blown up it seems pretty sturdy. The capsize and reentry abilities with the sides full of floatation looks like it would be good also. It seems heavy and folded up in the bag still might be a job moving it around and getting it in and out of the car and too the water. The electric pump looked like a plus.

My canoe is a tri layer poly and is even heaver than this one and I car top it with the help of a DIY loader I made and move it on the ground with the help of a folding kayak dolly. I thought about all the options with having a small car and a big canoe and just wanted the durability and simplicity of a solid boat. A trailer seemed like a good idea in some ways but in others I didn’t want to be hauling a trailer along. I stuck with on top.

I have not paddled one. I did do a three day, two night trip on the Current River with a small group and one of the guys paddled a Sea Eagle. It was a tandem model that he set up to paddle solo as a river tripper. He really liked it and said he had taken it on Class III whitewater and that it had handled well.

Judging by his speed on the water it seemed to be pretty efficient. It did look as if it would catch a lot of wind and he indicated that could be a problem at times.

So I like “duckies” but I like them with plenty of current, where the water can do the work. I am familiar with some sea eagle boats but not their travel canoe. In general sea eagles are well made and built to last although I wouldn’t consider them high performance and they are pricier than some of their competition. There was a time when some of their designs were a bit more dated than their competition. High psi floors have greatly improved performance.

Almost all of the inflatables I’ve paddled have been slower and more prone to wind issues. I say that as a general statement with no experience in the specific boat that you are considering buying. While transportation is easier, inflatables often will need to be dried out before storing and there is the set up time to consider as well. As a general statement, I would say your hassles increase with an inflatable, not decrease.

I actually find inflatables kind of difficult to move around. They are best stored not rolled up,
not creased. So I have to roll one up for transporting and they are kind of heavy and awkward to load into the back of the station wagon by myself. For a full sized (rolled up) ww raft I use a dolly when I am by myself. Duckies are easier than that and I can get by without a dolly but still kind of awkward.

I notice the Sea Eagle canoe is listed at 65 lbs. The best boat is the one that gets you on the water. I have a tandem canoe that I seldom use because it is heavy and and awkward to load by myself so I get your concerns. I just don’t know if an inflatable will meet your other expectations.