Here is a picture of the seat frame through the Royalex 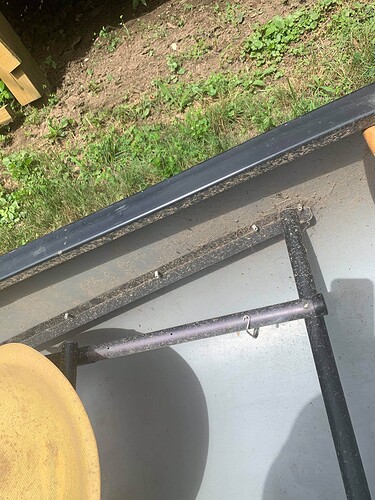 Very clunky looking seat design probably mounted too high in the boat. You can help the performance a lot by lowering the seats or adding ash seats.

That seat looks like it was originally designed to be a sliding seat.

I have seen seats like that on racing boats. They are generally set high to add to the mechanical advantage of the paddler. They are not for everyone and are pretty high maintenance. If not racing, replace with something you are comfortable with.

Bow sliders are (or maybe were) pretty standard on Wenonah canoes (and others). The purpose is to trim the hull when there is a discrepancy between paddler weights. I don’t know about high maintenance. Our 1990 Sawyer Cruiser has one & there has never been an issue with the frame. The same with my 1991 Rendezvous. The seats are pretty comfortable as well. I have many hours in both including a number of 25 mile in a day paddles. The seat frames in the Cruiser are set quite low but then the depth of the Cruiser is rather low. The Rendezvous seat is much higher but it is also on a pedestal type frame. I’ll kneel in the 'vous with my feet beside the frame.

Anyway, the setup shown looks fine to my eyes.

It’s in a Wenonah Sundowner