What could I use to keep the above flotation bags in place in the event of a capsize? Fiberglass kayak has nothing to restrain the bags and I can’t think of anything to hold them in place. 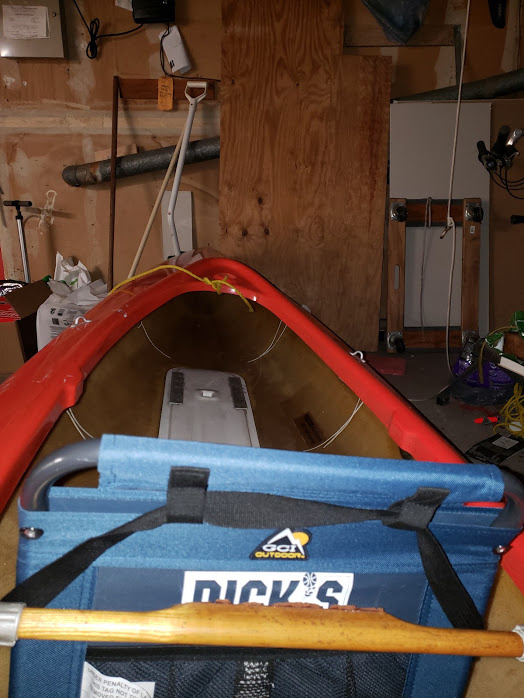 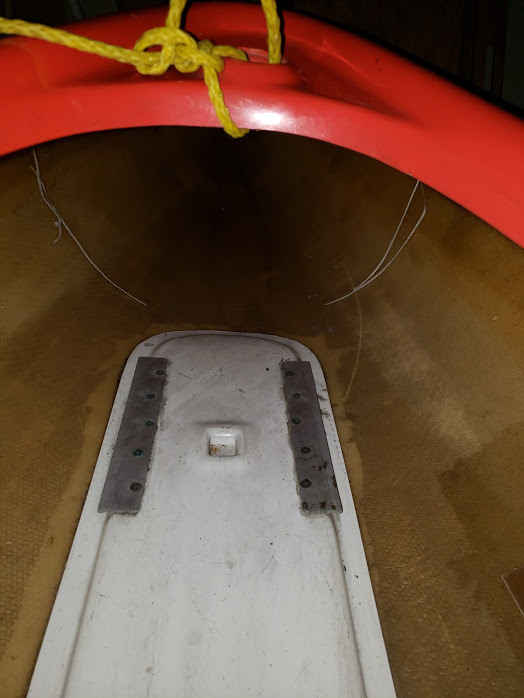 If the kayak has the typical plastic pad eyes like these for deck rigging, I have installed an identical pad eye on the inside (back to back with the original one outside) to get under-deck attachment points. In addition to the pad eyes, you might have to buy slightly longer bolts.

Have photos of kayak, especially looking inside the cockpit toward front and back?

Depending on your seat and seat back, it is possible that will hold the rear one in place.

Here is what I have done on two NDK Explorers with a few 1/4" PVC pieces (cut in half), fiberglass strips, resin, and bungee I had lying around. It is an easy job, but like anytime working with resin, drying time makes it a few day project. 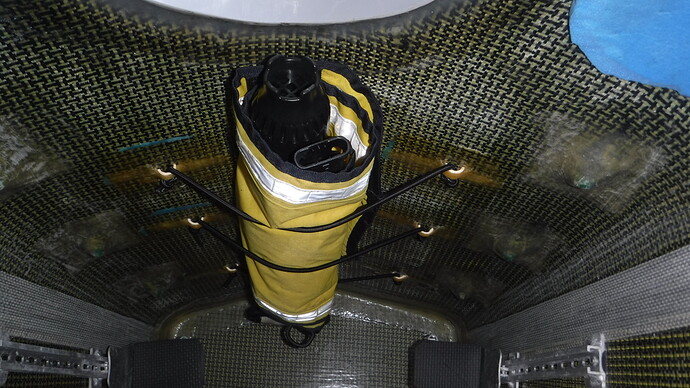 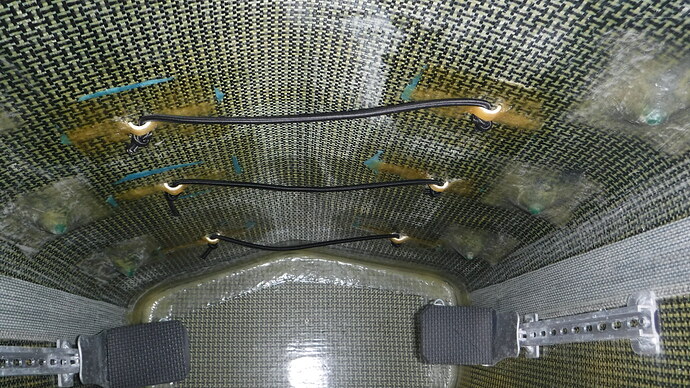 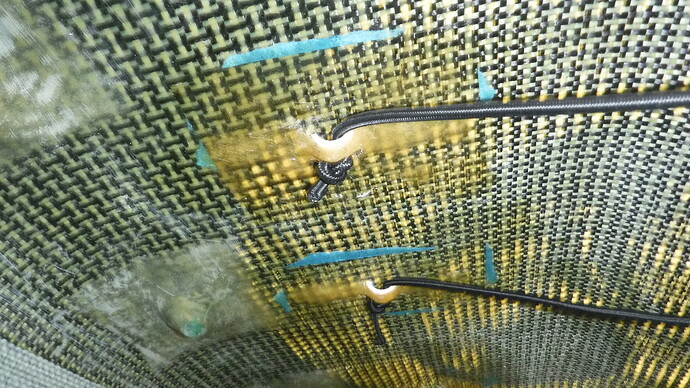 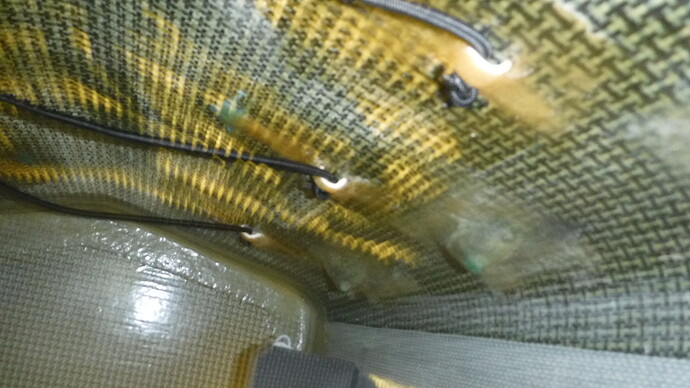 The blue painters tape was used for borders and got a little resin on it so was too hard to remove. I used the fiberglass/resin since there are not thru-deck bolts such as Wolf suggested.

Advantage: Clean deck topside. Storage in the void underdeck between your legs. Easy access when do self rescues. PS - It has never been a wet exit issue for me

Disadvantage: You must pop your spray skirt to assist another with a pump or paddle float.

***** EDIT: Sorry, I misread the original posting and thought paddle float vice flotation bag. Will leave this here in event someone wants to know how to store a paddle float & pump under the front deck. *****

This fiberglass kayak, purchased 1965 or so, has no deck rigging. Can’t remember if pad eyes existed then. I’m on a Chromebook which I don’t find easy to use with photos.

This fiberglass kayak, purchased 1965 or so, has no deck rigging. Can’t remember if pad eyes existed then. I would post photos, but I’m having a problem attaching via phone or Chromebook.

The new stadium seat back in stern is propped against the cross piece of the old seat back, leaving too much space to block the stern float bag. BTW, the bow and stern float bags completely fill their respective under deck spaces.The bow bag is 4 1/2 feet long. No feet or storage share the space under there. Now that I think about it, I would be storing my 55 liter dry bag behind the rear seat and it it’s secured that might be adequate to keep the stern bag from popping out.

Since the kayak is fiberglass, you could put some cord loops like kayakhank shows & use them to tie off to the grommets or rings on the float bags. If your bags don’t have a method to connect to them like grommets then you still might be able to create something that would hold the bag for a time. Be sure that you don’t create a possible foot entrapment situation though.

Fiberglass is relatively easy to attach to (as compared to HDE, which many current kayaks are made of). You could add a tie in using resin as kayakhank showed, or just glue an attachment on.

That said, along with appropriate flotation,deck lines are considered standard safety items now, but were not used back when the kayak was made. While you are adding attachment, you could just go ahead and add in pad eyes along the line of the deck for deck lines, and just add one or more at each end as double sided (inside and out) as attachment points for your float bags and dry bags. This would also allow you to add a zip zap of Bungee on top deck to hold small items, a nice to have that is on many current boats.

Another option might be a sea sock. You won’t have water pushing the bags out unless that blows off of the cockpit rim.

I use these to secure an under deck bag in one of my boats. Rather than just rely on the adhesive backing, I used a blob of Marine Goop on each one. They’re still very secure.

Low profile Tri-Way LashMate Minis are molded with a 3 way opening allowing for versatile rigging configuration and easy clip on attachment points for your gear. With peel-and-stick 3M® backing, you can add semipermanent lash points to your...

Rookie…Thanks for posting. I just ordered some for a plastic kayak. Love a clean deck when conditions get rough…

They work very well. Have to give credit to Marshall, who introduced me to them.

If it is carbon Kevlar like the pictures if glass in some straps as shown or any other tab fasteners.

Doubt though 1965 has any of carbon fiber composite. A good question would be what is the overall condition of a 55 year old boat.

The other practical way is to drill a hole for a rope to hold it in.

Excellent photos. Now that I see them clearly, I can understand what you did.

I appreciate all the helpful replies and glad I joined. If I’m successful in posting photos, that will be a bonus.

Thanks. I just ordered 3 sets. A couple of buyers didn’t like the 3M backing, but I’ll glue them.

some photo(s) of stern seat and bow deck, which has a center hump unlike modern kayaks. 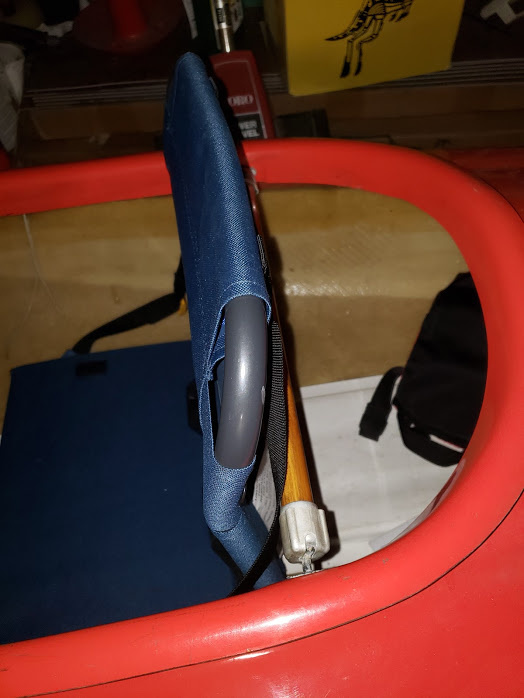 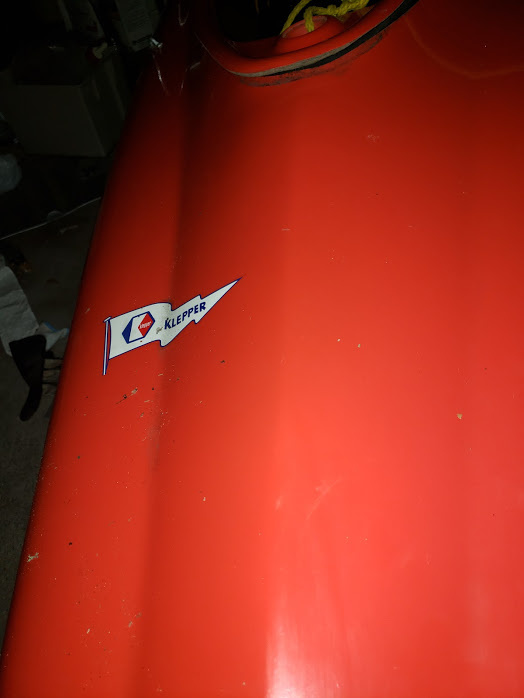 Overall, boat condition is good, been suspended in attached garage all these years. Last used maybe 15 years ago. I remember buying it at the Klepper store in Union Square in N.Y.C., circa 1965. May take it out in a calm area nearby just to see that it doesn’t leak and then install the mini stick on pads when they arrive.

I may buy that Marine Goop to secure the Tri-Way Lashmates. Didn’t know about the Goop. Hope it’s easy to apply.