Selecting a sit on top kayak

Hi! I need help replacing a Vibe Yellowfin 130T with 2 kayaks. My husband and I were using this and really didn’t like it for various reasons. It was very heavy. The dry compartments leaked. My husband (260 lbs) and the back of the yak sat so low in the water we had trouble with a lot of drag. The kayak moved slowly and heavily through the water. We couldn’t keep water from coming into the kayak (and removing scuppers just made it worse. The back end would hold so much water we continued to be back heavy. We used it on flat water and didn’t have the water filling problem but in a moving stream with class 1 rapids it was awful. The backend wants to swing around causing us to go sideways and flip. We can keep from it but it is too much work.

We’ve decided to sell it and get 2 individual kayaks.

FOR ME:
My son has the Brooklyn Kayak Co. 11.5 UA R220. I tried it and really liked it. It is heavy though. I’ve never had any other kayak though so I don’t know how it compares to others.

I thought the Perception Tribe 11.5 looked like a good fit for me. I want to do class 1 (maybe 2 someday) rapids, flatwater. I want to be able to have stability, move nicely through the water, track well of course. What I am concerned about is the seat. I really liked the seats in the Vibe and BKC. I don’t want to sit in water in cooler months when paddling on flat water. I’m afraid that my butt will be wet and that will ruin using in fall and early spring. Also, I’m concerned about the comfort of the seat. I’ve tried (just briefly) cheaper kayaks and those style of seats are awful. But this one looks better and higher backed.

Any feedback on the Brooklyn R220 or the Perception Tribe for rivers with class 1 (or 2) rapids, flat water use and possibly mild surf in the ocean? Or other ideas?

FOR MY HUSBAND:
He is 6’1" weighs 260 lbs. He has same considerations about seat, butt wet and us that I do.

I can’t comment well on particular SOTs.,
I can comment on wet posteriors. I tend to use skirts that are not super dry in favor of being able to get them off if I am tired. So even in a SINK I am in a bit of water if conditions are sloppy.
Dry wear handles that issue. Full dry suit combo if you swim, but for easier stuff and staying upright dry pants help a lot. For extending the paddling season, I would consider clothing as 50% of the equation.

I am a longtime SOT owner. I have owned four WS Tarpons, three 160 and one 140.
I have also had an Eddyline Carribean 140 and currently have a Hurricane Skimmer, also a 140.
For most of my paddling , I weighed 230 lbs and never sat in a puddle in a Tarpon except the first one with no scupper under the seat.
Tarpons are heavy but paddle better than the others I’ve had. They are faster for their size , mainly ,I think, because they are more narrow. Most SOT are wide and barge like.
The last 2 I mentioned are thermoformed and much lighter than the Tarpons . I’m getting too old for heavy boats. I feel like I’ve given up speed and sea worthiness with the lighter ones. The hulls are more flattened than I like.
Perception makes the Pescador which looks like a good one but I haven’t paddled it. They also have a good price point. The others I mentioned are more expensive unless you find a used one.
I have my last Tarpon for sale within your budget.
SOT can be a real handful in moving water since most are made to go straight. I have run mild whitewater several times and wiped out when I couldn’t make a quick turn.
And finally, I’ve had the Tarpons off shore a few times and they handled mild conditions very well .

I just got a new Tribe 11.5; have had it out once, on La Due Reservoir (NE Ohio). It seems to behave very similarly to the old Ocean Kayak Scrambler I had a long time ago. The second time I had that boat in the water was in Class 2+ whitewater, and it behaved very well. I also had it out on Lake Erie a couple times, once in Erie’s characteristic four-foot vertical chop, and it did nothing but inspire confidence, even playfulness. I loved it on rivers.

I’ve noticed a couple differences with the Tribe compared to the old Scrambler. The Tribe’s seat isn’t really drier, but it feels that way because of the cushion. The Tribe’s footrests are superior, and the footwell stayed surprisingly dry (I **always **had wet feet in the Scrambler). Most interesting was the difference in the design of the scupper holes. The OK’s still have theirs shaped on the bottom to suck out water when you’re moving forward. The problem is that if you back-paddle, that configuration works in reverse and floods the cockpit. The Tribe’s scuppers don’t do that at all; forward or back, nothing comes in (at least on flatwater). Nice if you like to back-ferry on rivers, which I think is a lot of fun.

I found the seat and backrest pretty comfortable. Actually, I don’t know what the backrest feels like, since I’ve got my PFD on, but it kept me in a good posture. Still, I have to get out of it and walk around once in a while, and that’s also true of my solo canoe. The canoe has a molded plastic seat and backrest, but for comfort I had to put a stadium seat cushion in it.

One thing I disliked about the Scrambler was its boomy hull-slap, and I was hoping the Tribe would be quieter … well, it is, a little; it makes a coffee-percolator noise instead. I think plugging the front scuppers would take care of that, but I’m not that bothered by it.

Thank you for all of the helpful responses.

If we get the Venus 11 and Tribe 11.5 and don’t like the seat support are their upgrade seats that fit nicely? We are in our 50’s and seat comfort is an issue on long trips. We live near the Brazos and the common trip here is 20 miles.

Will these work in class 1 or possibly 2 rapids. My son used his Brooklyn 11.5 quite well in class 1 and some 2 rapids on a 7 miles run with over 20 rapids without and trouble and it was only his 2nd kayak trip. We were in the yellowfin and had a lot of trouble with it. I tried my son’s on 2 sections of rapids and had no trouble. We are very inexperienced and just because his worked I figure there might be a better option for me. The Venus looks good. Just concerned about the seat comfort. I can wear dry pants in the fall if wet is a problem. I want to use them on flat water in the cooler months for lakes and paddle trails.

I agree with Overstreet. Anything less than 14’ is going to be a real drag for a 250 lb man. And a wet butt.

@wunderlong88 said:
Thank you for all of the helpful responses.

If we get the Venus 11 and Tribe 11.5 and don’t like the seat support are their upgrade seats that fit nicely? We are in our 50’s and seat comfort is an issue on long trips. We live near the Brazos and the common trip here is 20 miles.

Will these work in class 1 or possibly 2 rapids. My son used his Brooklyn 11.5 quite well in class 1 and some 2 rapids on a 7 miles run with over 20 rapids without and trouble and it was only his 2nd kayak trip. We were in the yellowfin and had a lot of trouble with it. I tried my son’s on 2 sections of rapids and had no trouble. We are very inexperienced and just because his worked I figure there might be a better option for me. The Venus looks good. Just concerned about the seat comfort. I can wear dry pants in the fall if wet is a problem. I want to use them on flat water in the cooler months for lakes and paddle trails.

@wunderlong88 Out of curiosity, what river & section was the 7 mile one with CI & CII rapids?

We live in a very rural part of Texas and went down a creek that no one ever goes down. It runs into the Brazos and usually is so low and many places dry so it doesn’t work for kayaking. We looked at it carefully on google earth to see what might be there. We have been keeping an eye on it with all of the rain and waiting for it to look to be a good level. It was fabulous if you had the right kayak and half way knew what you were doing. My grown son and his friend (more experienced than us) took their sot kayaks and had a blast. We thought we might run into fences or log jams, never thought about rapids. There were a lot and fortunately navigable. Only one set was so full of scrub brush we had to get out and walk through but it was shallow and easy enough. Lots of somewhat narrow areas with wide curves that were a bit scary for a beginner like me but turned out to be ok. A few short drops in elevation but nothing anyone with basic experience would fear. Some wider areas that were flat were much easier. Also beautiful rock bluffs down the sides of the creek similar to those on the Brazos. No fences though! Most of the time it wouldn’t have enough water (or too much).

BTW, I am only classify the rapids by what I’ve learned on an instructional video about that on youtube. I could be wrong but for sure nothing over 2. I only thought there were some that were a 2 because you couldn’t always see ahead because of curves and trees and there were trees or large rocks occasionally in the way to make sure you missed. My 13 yr. old son (his 2nd kayaking trip) had a blast and didn’t flip his Brooklyn kayak even once. Some places the rapids were 4’ to 5’ deep (or more) others just 12" or so.

BTW, I am wondering about the Malibu 11.5 for me? After reading a lot of reviews I wonder if it would be a good option. I’m a bit concerned I am too large for the Venus which I read has stability issues with larger or taller people.

You need to rent if at all possible. I would imagine the coast would be the best place to rent a SOT.

Thanks @wunderlong88 I was curious. I see that American Whitewater has a bit of information on the Brazos & a few tributaries. Your description sounds a bit more like a quick moving small creek - similar to the three rivers we paddled over the weekend. 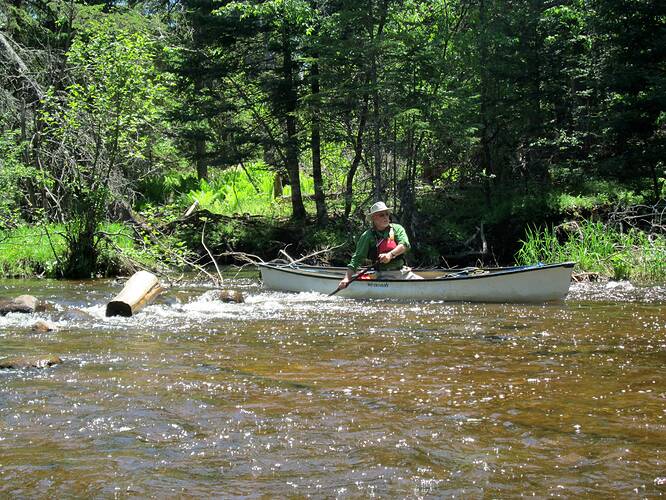 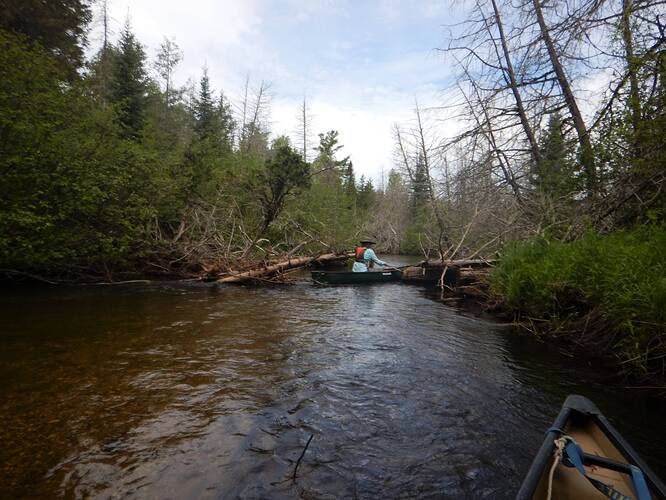 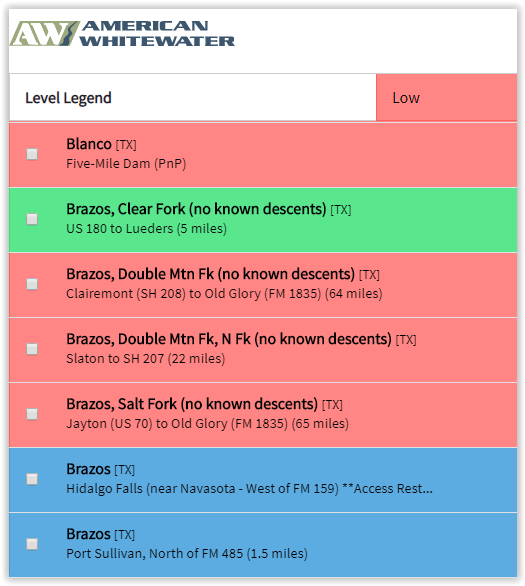 I am not partial to many of the current lines of SOTs. The Tarpons are closest to my idea of what a boat should be, but they are heavy and beyond your price range. You might be better with a solo canoe, like the Old Town Discovery line. They paddle better than current SOTs and have enough sideboard to keep your butt dry.

You can also remove the seat and make them into pac boats if the center of gravity is too high. With an MSRP of $699 and weight under 50lbs, they might fit the bill. My favorite piece of advice to buyers of kayaks is to find one that you are not entirely comfortable in. You will grow into it and not get bored as soon.