Hey everyone,
I posted earlier as a newbie looking for a faster rec kayak for use mostly on creeks, small rivers, and smaller lakes. I found a used 11 foot Old Town Manitou online and got a pretty good price, but when I arrived to look at it I noticed a shallow but large hull deformation/dent (here’s a pic - it will only let me post one). 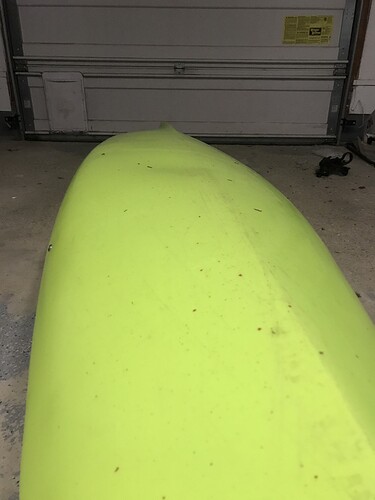 My question to you is how much is this likely to affect the kayak’s performance? Is there any way to repair it, and if so, is it worth it?

Here’s a side view 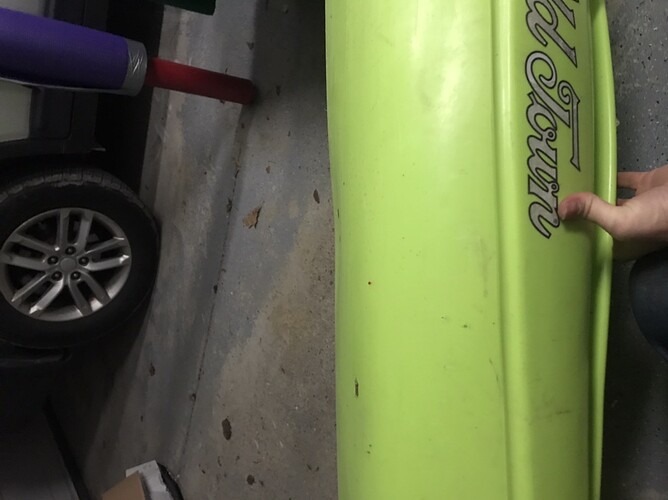 I wouldn’t worry about it. Rec boats aren’t known for blazing performance anyway so the fractions of a percent slower that you might be won’t be noticeable. Many plastic kayaks have a dent in the same place - right under the cockpit opening is the weakest part of the boat, combined with the flat bottom is a recipe for oil canning. You can leave the boat upside down in the sun and it might pop out (or at least be less noticeable). I had a Manitou Sport for many years and I think it had a (smaller) dent in about the same spot. Great little kayak!

You won’t see it when you are paddling. Both of my plastic boats have similar things.

Thanks - that’s reassuring. I read an article about things to look out for when buying a used kayak, and one said be very wary of hull deformities. So when I saw this, my heart sunk. I’m relieved now and excited for the weather to warm up.

Agree with the above. That type of deformation is very common in a single layer polyethylene kayak hull and will have a minimal effect of performance, if any. Attempts to “correct” it are likely to be unsuccessful and could possibly make it worse.

Live with it is good advice.
I would go one step further. Out of around 8 canoes, and one kayak I have never owned a new one. Once they have some wear on them, it is much easier mentally to take them out and use. them. I am not interested in new boats and having to be careful about scratching one.

plastic boats are shape shifters- it’s all good until you get a crack or hole in the hull, just go with it and enjoy until then

smack it on the other side, to make it symmetrical. You’re welcome