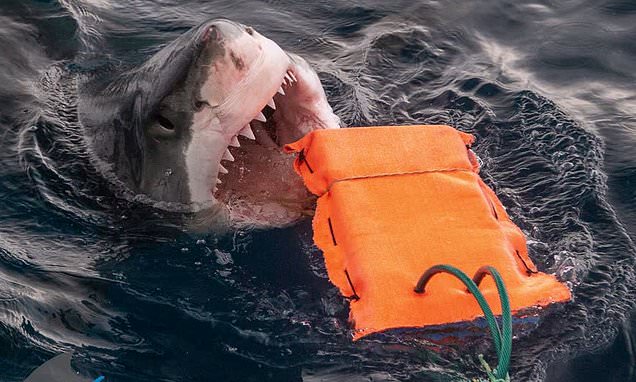 Don’t think I’ll need one of these, as my contact with sharks is minimal, but, maybe our friends in the increasing yum yum seal population of the Cape Cod area, attracting the Great White’s, one of these might help.

Haven’t there been strongly patterned black and white wet suits for a while to which sharks have been shown to have an aversion? Reportedly a hard-wired instinct to be afraid of boldly striped sea snakes, one of the few animals that can seriously hurt or kill a shark.

Don’t think I’ll need one of these, as my contact with sharks is minimal,

…since you sold the “shark bait” boat.

Might help someone out but I’ve got to think that with 1,000 pounds of bite force whatever a great white bit would be crushed and destroyed with or without teeth.

“May these circles be unbroken!”
Rod replied, “Val, without fail!”
“Guess we’ll see in sea dear Valerie,
and the check is in the maille.”

“No, this chick is in the check,
and scarlet billows means Mac’s failer!”
If your lark’s to park suit inna shark
then it’s best to have good Taylor!

To start with most shark bites are not by great whites. Although most times the species can’t be identified (which isn’t the case with most white shark attacks), it is obvious that most of the bites aren’t by big white and tiger sharks. The cause of death is generally from bleeding from the cuts made by the teeth. It’s also the case that most bites are test bites. If the wet suit stops the teeth from cutting and the alien feel of the suits results in a quick release then I think it would have done its job.

A good link for this type of info is the Florida State Museum at UF “International Shark Attack File”.
https://www.floridamuseum.ufl.edu/shark-attacks/

I believe in Oz most shark attacks are GWSs, and possibly high percentage of tiger sharks. The statistics from above are that are quoted about shark bites are most from Florida, where there is not a large GWS population. Shark attacks in California are almost 100% GWS, Hawaii has Tiger and Hammerhead attacks.

Black stripes have been marketed for years on wetsuits and on the bottoms of surf boards to scare off sharks. They simply don’t work. I bought a used surf kayak from a guy who surfed in the “Red Triangle” in central CA that had the patented black stripes on the bottom, and the leopard sharks and sand sharks loved to surf under my boat with me.

It seems that most of the striped venomous sea snakes (like the sea krait) are only found in the warm waters off South Asia and northern Australia. So perhaps it is only sharks in that zone of the oceans who are averse to that patterning.

shark bites are most from Florida, where there is not a large GWS population

They are tracking two maybe three great whites off the coast of NE Florida right now. They often stop by on their way up north or conversely down south. Like the Canadians and other yankees

this time of year.

Generally though most of the shark bites are close to shore, ie surf, and on swimmers or surfers not wearing any wet suits. Mary, a GWS, often comes in to about 100 yards off shore on her trips. I guess Lydia does too.

Article starts from the Florida Times Union, a Jacksonville newspaper.

Pps…we’ve got 1800 miles of beaches and the most registered boats of any state in the US. …more exposure.

I believe in Oz most shark attacks are GWSs, and possibly high percentage of tiger sharks.

naw…i think most of them are from spinners, black tips and other small sharks hitting bait fish in the shallow surf zones. Bull sharks are more likely to hit people here than GWS. The bites are usually on surfers or tourists in the surf. The bite marks often have both sides of the bite on the same limb.

Thanks a lot for reminding me of the site (Ocearch)
I’ve got my ‘monthly Cumberland’ coming up.
Notice that ‘Miss May’ (GW) is heading down, currently just north of Brunswick, GA
If we pass each other in the night, well, as long as she doesn’t want to stop and chat.