Should I row square stern canoe?

I recently got a well used square stern Discovery Sport 13 from Old Town. We took it out for it’s maiden voyage today and had a great time. I have been on the water all my life in various boats, and recently traded a kayak to get this boat.

I have a single blade oar from Featherlight that I used While paddling from the stern seat, and my girlfriend used a double sided kayak paddle some in the front. We were on a small pond that was pretty still.

We got around relatively easy but The real test will be going down a river in this thing. That’s what I would like to do with it primarily. I live in St. Louis and there’s not a ton of flat water fishing options nearby, but there’s lots of great rivers.

Anyway, do you think I could control it from the stern going down a river with another person in it?
I am considering looking into rowing it instead, like a drift boat. Where I’d put oars on it and slowly row backwards all day to control it down the river. I’ve seen others ask similar questions about rowing a square stern and it sounds like it’s a good way to go

And if I was going to put oars on it and row it, what would you recommend?
I see Old Town has some basic oar lock sockets from Carlisle…what length and type of oars would you recommend? Could I use the featherlight I have as one of the oars? It’s not nearly as sustantial as all the big round oars I’ve seen used in drift boats and rafts I’ve fly-fished out of, so would I snap it?

Why reinvent the wheel? Just paddle it like a canoe. Work on your single side paddling, if that it what you want to do.

Lots of people here, myself included, single side paddle canoes with passengers all the time.

a single blade oar from Featherlight

A paddle would be easier.

I am considering looking into rowing it instead,

Old Town offers oarlock kits made for their Discovery 13 boats. The middle seat is located just right for rowing as well.

Look over the specs. It’s a heavy boat when empty. Adding people will make solo, single blade more challenging. And especially the Width of the Discovery Sport 13 adds to the challenge.

I had one, long ago (not the square back version). The Discovery 13 series boats can be a handful solo paddling, single blade in windy conditions. I tried a long double blade too, when the wind would pipe-up - but if one is older, perhaps not at a high level of physical fitness, it may become a painful experience for ones shoulders and back.

Mike931x…
Yes that may be what I need to do, but I’m not sure if you’re familiar with the dimensions of this boat. As someone has now posted them below, you can see that it’s incredibly wide and has a strong keel, etc.

Although, it wasnt turning that I was having a problem with during my paddling today…It was going straight, interestingly enough. All my strokes from the back seat made the boat want to turn side to side alot.
So maybe on a river with the current pushing me down stream I’d be fine, and capable of manuevering and turning it easily.

@Overstreet
We had a two sided paddle for kayaks in the boat too…is that what you mean?
I tried it from my seat and I got tons of water dripping in the boat, and secondly I don’t really think it was wide enough for this canoe. Getting a longer kayak paddle could be a good option though, as opposed to taking on the rowing idea

@canoedoc
Thanks - yeah the specs make it clear that it’s a wide heavy boat, and with the back cut off, it’s not much of a canoe really, and more of a row boat.

I am young (30) and in good shape (I work out several times a week and what not), but I only weigh 140 myself soaking wet… so yes working the boat in the wind became tiresome and just felt like more effort than it’s supposed to be yesterday. 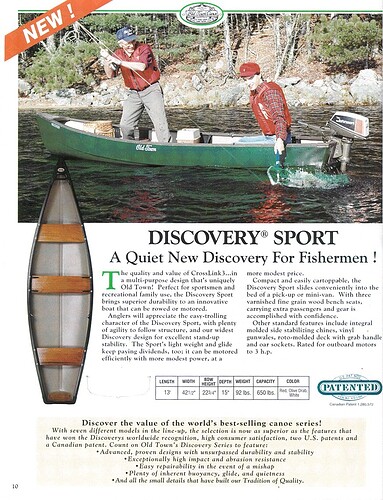 image875×1142 418 KB
Old Town sent me this brochure image where I noticed that it originally came with oar sockets! I thought that was interesting

So I have a few more questions about rowing though:

Small back arrows represent the direction I’d be pulling the oars back in, pushing against the current

It is designed to be used with a small outboard motor or electric trolling motor. You can row it like a drift boat facing down stream. With two people you can paddle it. It is not really good for any of those techniques but is very versatile.

Facing down stream you can use the oars to back ferry. You can pull with the oars at an angle across the current and move your boat back and forth across a river. Do some reading about it.

I am well aware of what it is like to solo paddle a large canoe. I have done it witg passengers on short trips and lots of gear on long trips.

At no point did I feel like rowing would have been any better, and I rowed for several years competitively

That said, what you have can barely be called a canoe. If you wanted a canoe, you bought the wrong boat, IMO

This is a 42.5" wide square stem boat that is offered with oarlocks by the manufacturer. If I recall, it’s probably 42.5 at the water line. It is quite a bit more like a small 13 ft row boat than you’d expect.

Unless you’re taking the boat on a river with no rocks or obstructions, I don’t know that I’d be comfortable facing backwards. Then again, I could never get used to some guide boats either.

Facing backwards while running rivers, went out of fashion with John Wesley Powell.
Modern age of rowing rivers began on the McKenzie River in Oregon in the 1930s.

Thanks guys, (I didn’t say anything about facing backwards going downstream though)
would I sit in the back seat also facing downstream

Regrets, Orey10m, for being unable to help with your questions about rowing. Paddling yes - though there is so much still to learn. Continual learning is integral to paddling as well as: paddle-craft design, history, and of course, sharing time on the water with everything else out there (poet W. Berry described it as being with “the peace of wild things”).

Rowing websites abound. There are even oar devices that allow one to row facing in the direction of travel. Hoping you will enjoy each and every journey.

Yeah - thanks for the help so far. Sounds like it could work but we’ll have to see.
I’m still interested in whether I should be trying to orient the boat like I show in the picture above, or like this, with the back of the boat leading downstream? 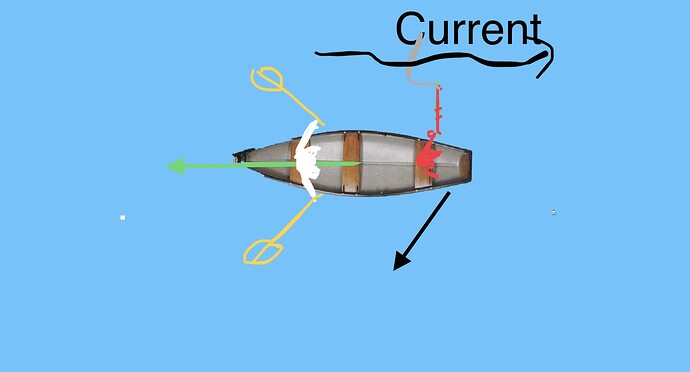 If you are planning to use it with two people place the oarlocks so that a person can row from the bow seat facing the stern. The other person can be in the stern seat and can use a canoe paddle as a rudder so the rower doesn’t need to keep track of direction.

If you set the oarlocks to row from the middle seat it will be impossible to get the boat trimmed level.

Probably a 7 foot oar would work well. Good oars are worth it. Look at Shaw and Tenney in Maine.

Thanks for the input. Just to clarify, I’m just trying to control the boat as it’s going down stream, not row upstream against the current.

Someone else asked me that question and I realized the diagram may be misleading.