Show photos of boats you have built or restored

Yes, the time and effort keep many from doing this. However, the knowledge gained and the effort expended are rewarding in themselves. They add to the journey, and a certain undefined connection that brings much satisfaction. I have been accused of enjoying working on boats as much as using them. Although, that would be overstating it. Well maybe while doing it, and dreaming about paddling does come close 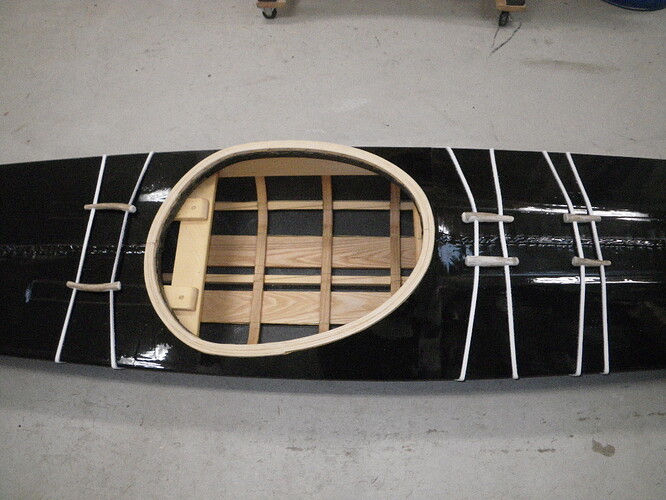 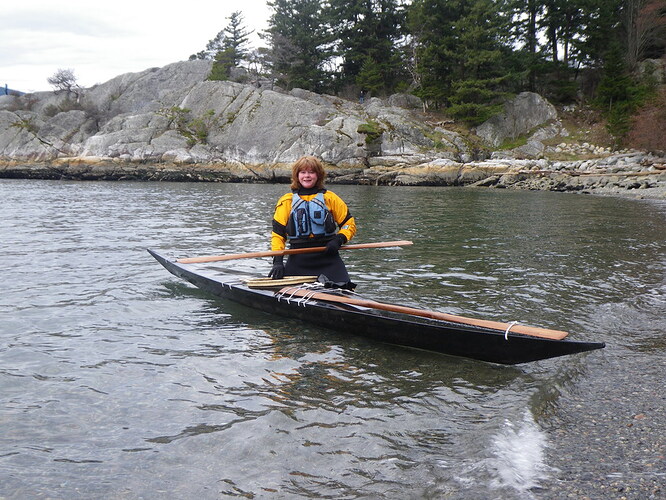 Pygmy Osprey 13 built for my daughter: 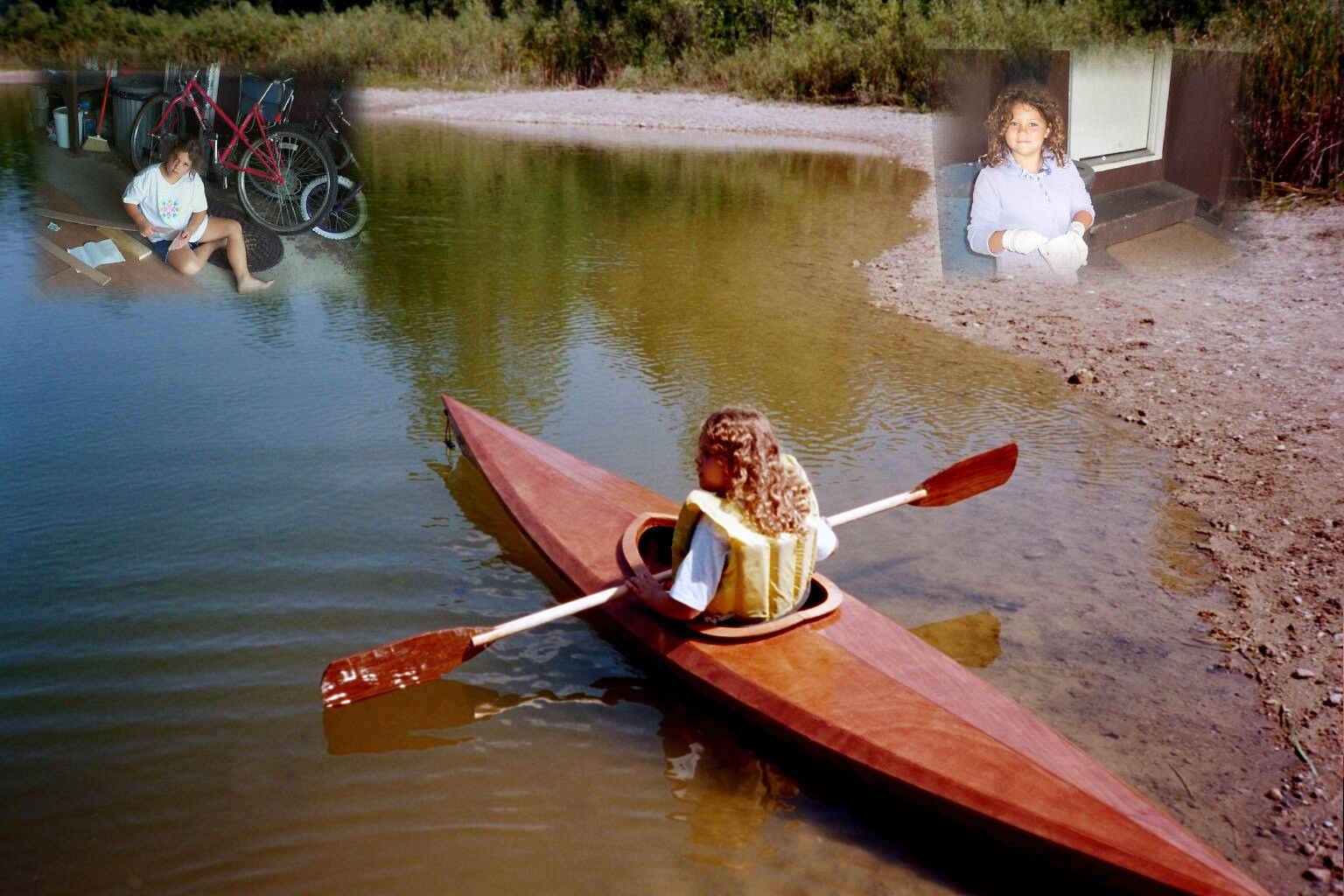 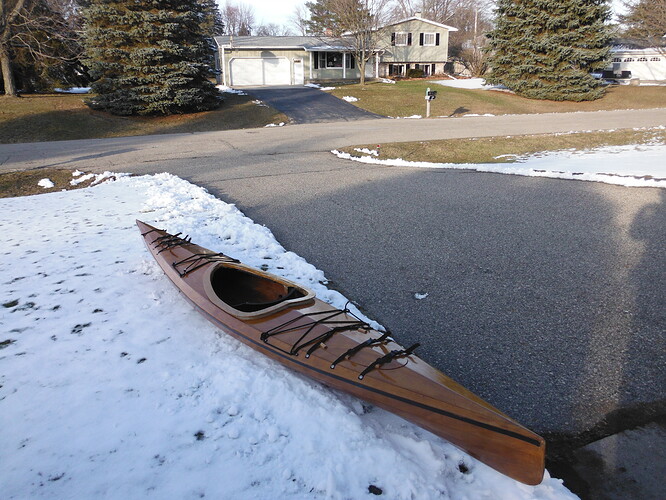 Next up a Pygmy Arctic Tern 17. this one I still have. Main kayak for ~15 years - until last May. 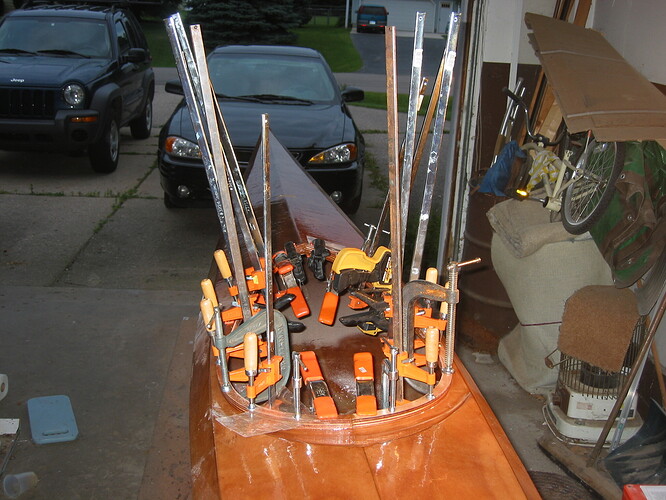 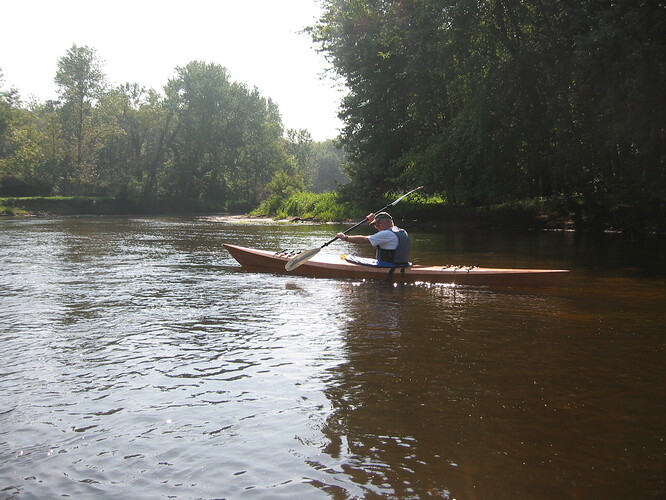 After Emma outgrew the Osprey we built a One Ocean Cape Ann Storm LT - Strip kayak. This one took nearly a year from board to varnish. 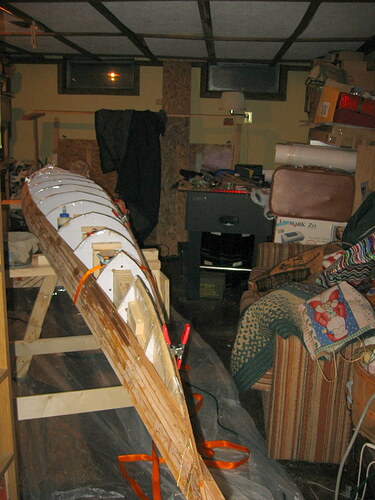 Basement build - then you have to bring it up: 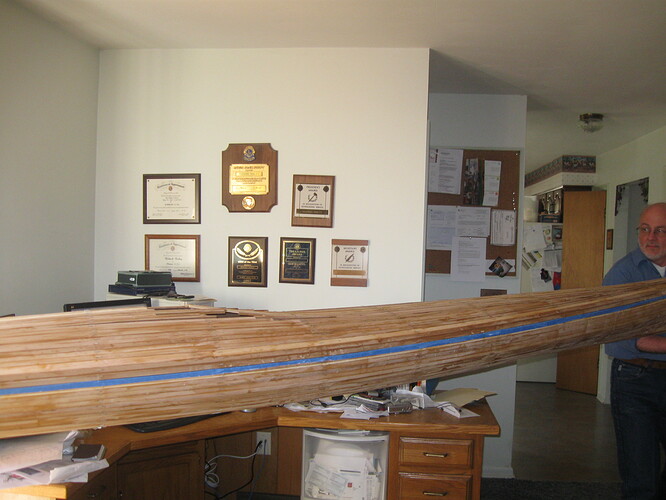 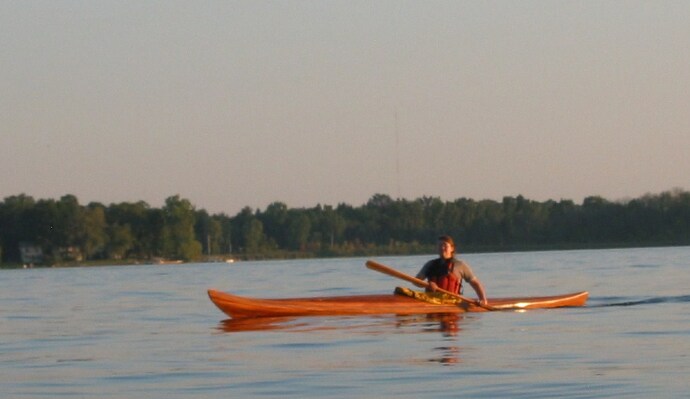 At one point I thought that the Tern was too big & thought I wanted something smaller. Went for a Yost Sea rider. Too small really. Even with raising section 4 (the Masik) by an inch I can’t be comfortable in it. 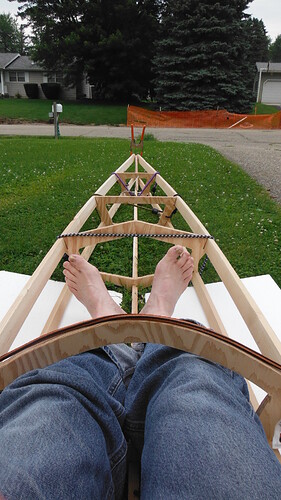 I did test paddle it wrapped in plastic: 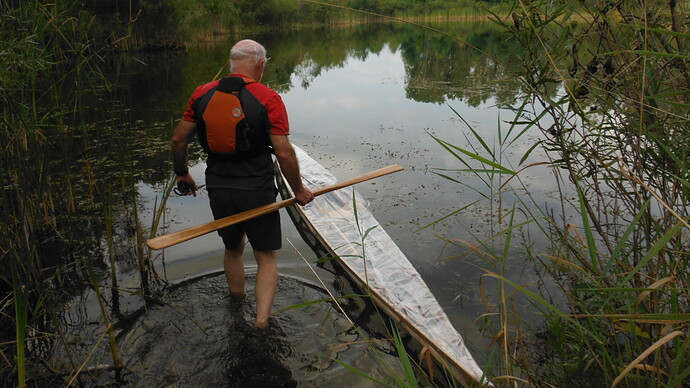 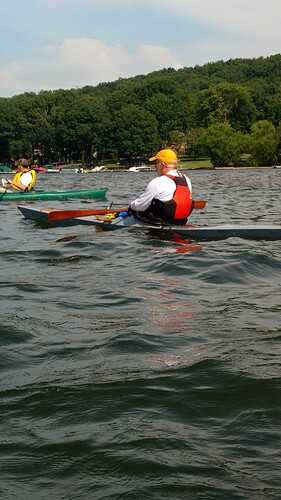 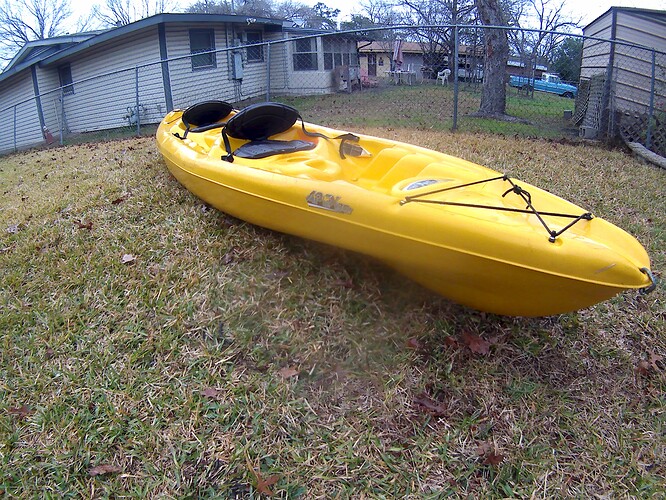 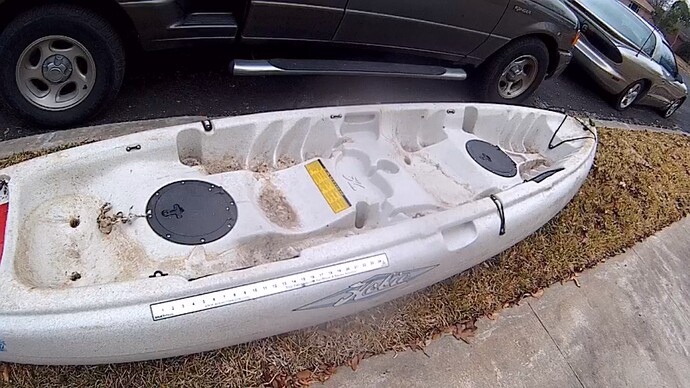 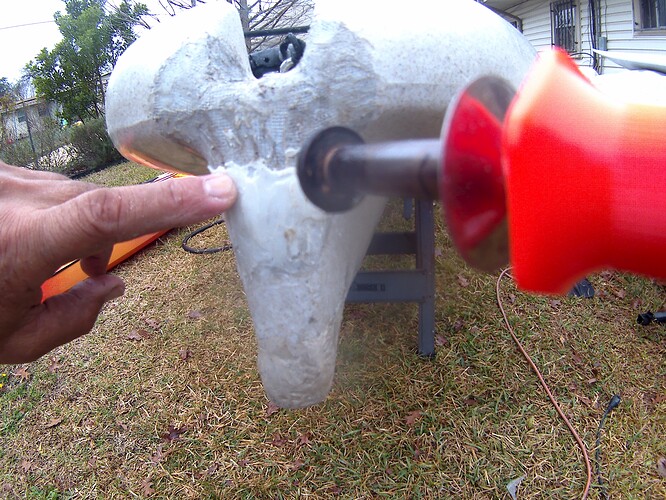 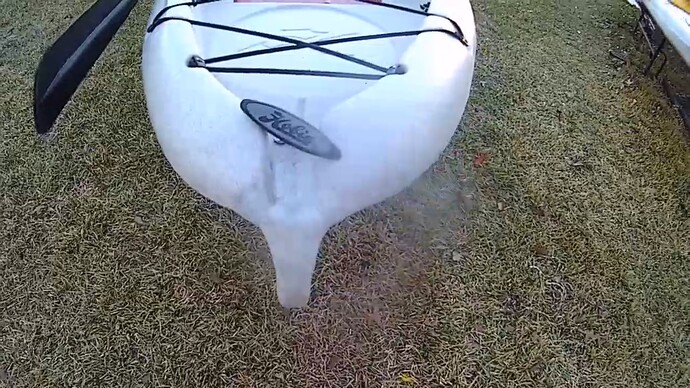 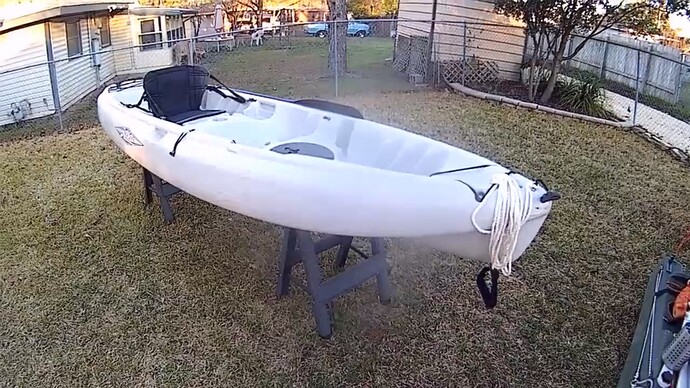 So there was this hull that turned up under my dock amongst the cyprus trees. It was about 15ft long, plastic and stripped of all the gunwales, seats, thwarts…Oh yes, and painted camo. No one claimed it. About a year later I started a rehab on the canoe. But instead of the camo painted blue canoe it was I sanded it down and prepared it for white paint.

I painted it white and left the gray interior. I added spruce gunwales, ash thwarts, bulkheaded chambers on each end and one cain seat. It was to be a solo canoe. It worked.

During rework it was in the garage. The garage was crowded. To work on the other side I had to move the boat outside, turn it around and bring it back in.
. 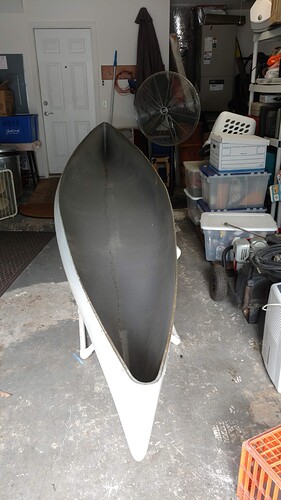 I had trouble finding pictures of this one. It was kind of a low priority boat.
This finished picture is on Thomas creek up near the prison farm. Photo credits to Seminole Canoe and Kayak Club, Ron Moredock. 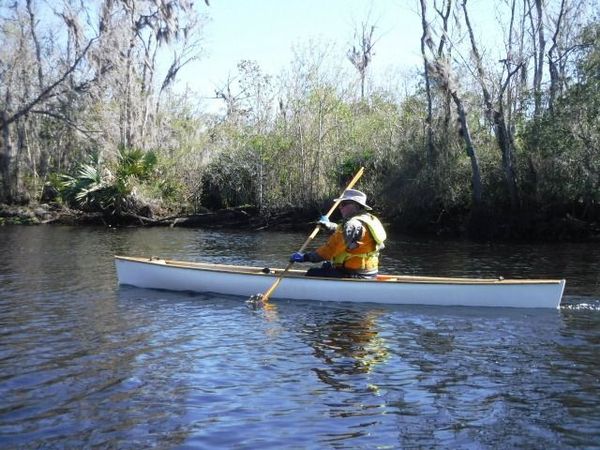 Nice boat accents cast-off. I have a stray that comes to my back door and sets my motion light off. Has the same coloration and ths proud stance. I think I’ll call it supervisor.

All beautiful boats, especially that canoe that is a unique design to me.

Stroke of luck for your Tsunami porkrind. I have a 175 roto molded Tsunami and regret I didn’t go for the 170 pro. It’s far too heavy and long to transport efficiently. I’m also disappointed that I was not able to exploit the 3 feet extra length over my standard 145 Tsunami. Hope you enjoy it, and it looks showroom fresh. Looked at the specs. I need the high deck and larger cockpit. I envy you.

I didn’t do the restoration. Definitely, beyond my skill and shop. I did do the nasty part with deconstruction and stripping. 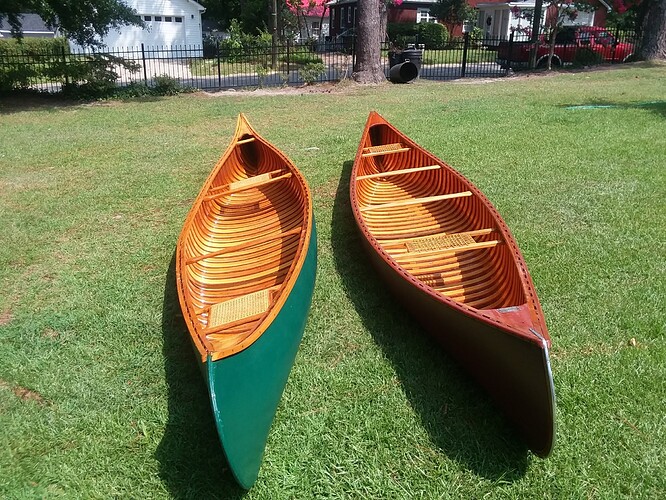 My wife and I built this little rowboat. 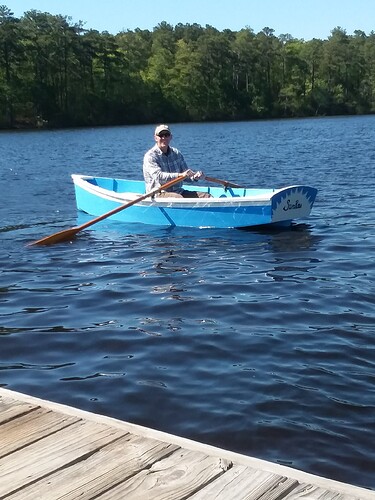 Boat on the left I just finished restoration of the hull, going to recane the seats this winter 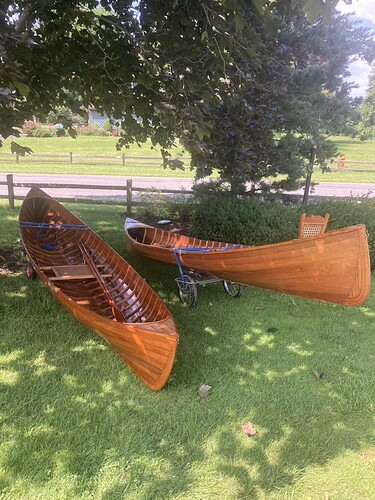