Signs of winter on p.com

No time during the season for fair weather paddlers.

Replies need to consider the audience. A topic might be answered with acronyms and slang for the long timers, but the reality is that explainations have to be complete and detailed enough for everyone. If answers were aimed at the experienced paddlers, there may not be any need to even ask a question.

String, don’t you live in one of those warm states, where you can paddle all year without getting cold?

Some of us live where the water freezes. Warm weather = not much time to write book-long responses. Paddling, hiking, and outdoor work on the property consume days and personal energy.

We usually don’t paddle the coldest months, January and February. There may be a nice day, but those also tend to be wet months. Yesterday at 7am it was in the 20s. Today it’s 40s.
40 ish and wet is a bone chilling combination.
When we lived in Colorado Springs, which doesn’t have much snow, I’d go to the mountains to play in the snow but now it’s just fun to watch the dog enjoy it when we have our one or two days.

I hear ya about 40-something and damp. In other words, penetrating raw grayness, the stuff of sneaky hypothermia. That’s why I took two months off from paddling when we lived in NW WA, December and January. It was great having 10 other months of tolerable to perfect weather to choose from, though.

Colorado’s Front Range weather is schizo. We sometimes got extremes within one day, like the time I watched a balmy (55? 60? degrees) afternoon make the mercury drop as I watched it. Blizzard conditions by the evening. And yet, in the same month, there might be an idyll after the last storm, after the introductory warm chinook winds foretold the next cold snowstorm, when somewhere between half a day and two days would go calm, sunny, and in the 60s. THAT was the time to drive to an unfrozen big reservoir (Pueblo) to grab a winter paddle. In drysuit, Chota mukluks, Glacier Gloves, etc, of course. The water one of those times was 33 degrees.

We don’t get chinooks here, and the climate is different despite being in the same state. No 68-degree days in late December, but OTOH the below-zero nights don’t go as deeply low.

I guess the above qualifies as a novelette.

Still trying to figure out the attraction to “whitewater” canoeing. 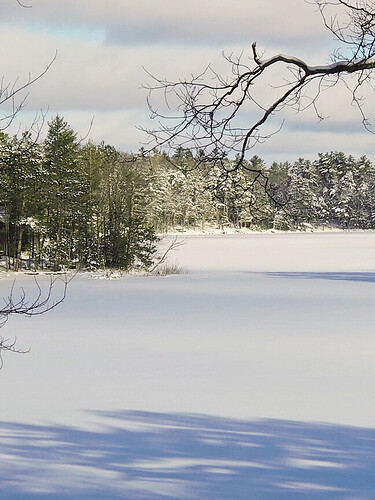 I have no idea what Pcom is, but signs of winter are easy to see by looking out the window and even easier when I go outside. As I write this it’s -9F and we have a 35 MPH wind blowing so I can see about 50 yards. My big 4WD truck is now frame deep in a snow drift ---- about 1/2 mile from my home on the road coming in, and I am waiting on a neighbor ( Local farmer) with a 8WD Tractor to come pull me out.
So yes, I have signs of winter around me.

OH…I just got it.

(not very computer smart. Can you tell?)

Is that normal for your winters?
Hopefully not.

@Buffalo_Alice I’d give you hearts

for the picture, but I understand the lure of white water canoeing. I just haven’t done it in 35 or 40 years. You need talent or you bust up your transportation. I fell into kayaking on open water and love it more. Mainly because there’s no need to shuttle beyond getting to the launch. Canoe stories made me reconsider pulling my Penobscot out of mothballs. Its virtually new. There’s something appealing abouts the glide of a canoe compared to the speed of a kayak.

Well String, it depends on the definition of “normal”.

Temps from - 15 to -25 is normal from the 3rd week of December to mid January. So this year if the forecast is right we may be a bit warmer then many. The weather man says we are supposed to get into the mid 30s next week.
But this storm is a bad one for cold. The forecast for tonight is -25 to -28 and wind chill to -45.

The coldest I ever saw it was in the winter of 95-96. We had one night it was -67 and the high the next day was -48. And that was ambient temp too. NOT wind chill. THAT was a cold winter!

Wyoming winters are cold, but not as cold as some you hear about in Canada or even N. Dakota some years. Colder then a lot of places---- but less cold then some.

Snow?
Yeah we get that too.

This snow is drifting not falling. We got about 11 inches 10 days ago and the storm coming through now is not dropping a lot of new powder. It’s just the winds that are moving what’s already here around.
So the 3-4 foot deep snow on my road is not because we got that much snow, but because the wind put it all around the cuts for the road when it blew it off the fields for about 2-3 miles to my north. We had a good little blanket of even snow just about 9"-10 " deep until the wind got here. Now there are places where it’s 2 inches deep and places where it’s 4 feet deep. But the way the road in is cut it forms a natural “snow fence” and so the drifts gather up there. I got my truck pulled out my my neighbor with his John Deer 8WD tractor and got the truck back up to my house. But the Tractor could not plow it’s way through the drifts and so the main road into my home is now blown shut until spring. He was spinning all 8 tires trying but it was no use.

I have 2 other ways out, but until the wind stops I can’t say if I’ll be able to use them. I’ll know by Friday.

I have seen snows from 30 inches to 3 feet deep a few times that were not drifted, but I have been here for 30 years and only 4 times the snows I have seen on the level were over 28" deep.

Most years our snow right where I live gets a foot to 14" deep. Other places get much more, but right here it’s not too bad most winters.
Not nothing, but not enough to bother you much.

I know people who have lived and worked in those conditions.
They live here now.

Is cabin fever a common occurrence in your neighborhood?

Not much. People here are mostly outdoors folks. Lots of ranchers and farmers so they go out in it as part of the job even when it’s cold and blowing. EVERYONE here has extreme cold weather clothing and gear right down to the small kids. I see sales of snow mobiles are high and lots of folks go out in these conditions to play. Ice fishing is a big thing here too. And a lot of cross-country skiing.
I hear of folks from other places coming here and loving it until winter takes hold and then deciding “______ was really not so bad” and moving back again in the spring of the next year. But I personally have not seen it much. I don’t live in or near any large city. The biggest city within an easy drive is Riverton with a population of about 10,000, and it’s 14 miles away. Casper is the BIG city and it’s 100 miles from me. It has 50,000 people.

I live in the Shoshoni postal district. There is just shy of 500 people in the district which is the town of Shoshoni itself and also a radius around it, going 50 miles east, 11 miles north, 7 miles south and 13 miles west of the actual town. Quite a lot of land for five hundred people. No one moves here unless they have a mind to be country folks and the lack of “city things” is what they want, not something they are horrified to loose.

So with the mindset of living in the country everyone has all they need to winter a storm over, has all the worm clothing and gear they need and already has a passion to play outdoors, even when it’s cold. NO ONE moves to Wyoming, Montana, Alaska or North Dakotas if they are horrified at the idea of cold. Just like no one would move to Florida who can’t stand a lack of ski-slopes and no mountains to use their snowmobiles on.

It’s just what different folks are drawn to I guess.
As a side note:
It was -26 when I got up this morning. The forecast was for -40 to -45. So I am glad they were wrong this time . Sun’s out now and I expect it to come up a bit by the afternoon.

I was born an outdoorsy type but married a woman who isn’t and had jobs that weren’t. We have a son who is so I go with him when he has the rare chance to go.
Paddling gets me out there so I’m looking forward to March. Or maybe a trip to Florida.