aka: Horseshoe Island.
I promised my grandsons that I would take them kayak camping two years ago. I thought I had better get it done while I can.
We selected this little island on Lake Hartwell because it is close to home and a mile from the ramp.
Until last Friday, I had never camped out of a kayak. I had a lightweight tent purchased a year ago for the purpose, I got some Walmart camp pads and then started adding to the list. It takes a lot of stuff to be reasonably comfortable in the woods.
We set out on Friday afternoon. It was in the 80s with low humidity.
Our advance party let us know he had secured the island for us meaning noone had beat us to it.
It is a beautiful spot if you can ignore the mound of beer cans and partially burned junk in the middle of the best camping area.
We set up and hung out , literally (hammocks) until sundown and went searching for the full moon. It took a half hour but finally showed. It was a first for the boys.
The lake was busy, so we hugged the shore and circumnavigated the island. Half way around, a large craft started shadowing us. That mystery was solved when he turned on the blue lights.
Busted by DNR wardens! He could see everyone’s light but mine. He warned us that things could get pretty wild on a full moon Friday night at that place. We were off the lake shortly after that.
About 10 , the Bubbas were out in force. There sounded like a drunken party going on the island next to us and there was a parade of boats going by with radios blasting.
We went to bed and it sounded like our island was the center field of the Indy 500. Reflected sound?
At 1am the noise stopped like a switch had been thrown. We had seen that blue light on several other spots on the lake.
At 3 am an unknown bird decided to sing​ his lungs out right over our camp. Probably a mockingbird.
We were up at 6:30, if you can get up after a mostly sleepless night. The lake was so peaceful.Only one boat in sight.
We packed out and headed for Cracker Barrel.
Thus ended our one night epic. My goal is to give the boys memories. They will never forget that night.
They were still tired this morning
I am still recovering.
PS: Naked Lady Island was named after a woman in a flesh colored bikini was seen there on a previous moonlight paddle. Upon closer examination, she wasn’t.
It is actually shaped like a horseshoe.
And thanks to the other 3 men who joined us. I wouldn’t have done it without them.
I suspect that is my last kayak camping trip. From now on we car camp on the lake.

Sounds like a memorable trip. Wish I could have joined you. Middle of the week would have been a bit quieter I suspect. Never been blue lighted on the water before. Glad to hear he was out there on a night like that. I bet that blue light kept things down a bit less than they would have been otherwise. Hope the ground wasn’t too hard on you. It was a beautiful night here. First night camping is often more sleepless even when things are quiet. The second night on the other hand is usually much more sound.

Sounds like those lads certainly had a night they’ll remember for some time to come. And Cracker Barrel’s a perfect way to end any camping night where you had to put up with noisy neighbors(imho) .Just get ready for this inevitable question, “When can we do that again, Grandpa?”

The ground kicked my butt. A few photos. 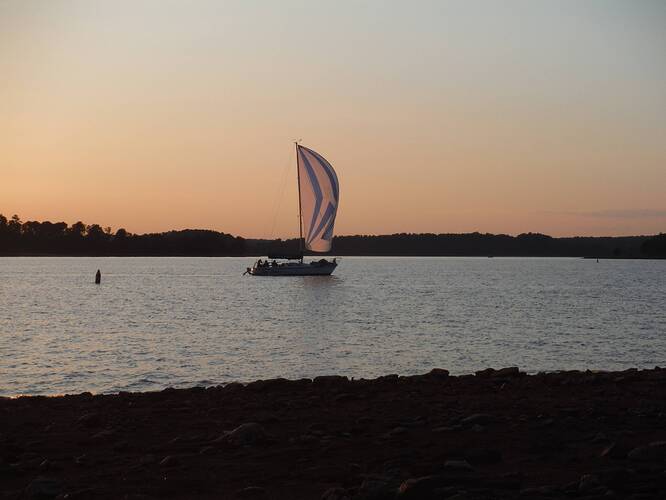 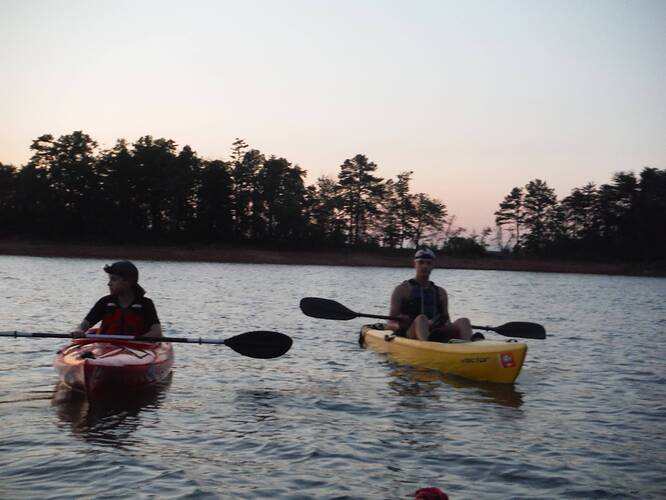 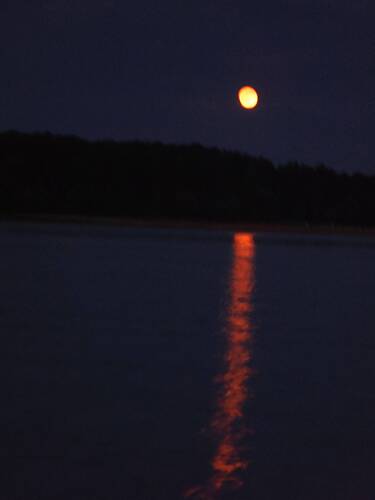 Spiritboat is right. Some of my fondest memories from childhood are of camping trips in wild places, including riverbanks, with my dad and in the Boy Scouts. In particular, I remember doing that on the Mississippi River backwaters, and I can’t help but wonder how much that has to do with me eventually becoming such an avid seeker of wild places for paddling.

My father did the same for us. I did it to a lesser extent with my kids .My son is doing it with his sons.
My daughters both married guys who think laying in a hammock listening to the radio is outdoors. It is their sons I’m working on.

Crazy trips make the best memories. My best kayak trip memories from last year were the bear in camp at Grand Teton, and the “Rainbow People” who camped next to us at Spanish Bottom on the Colorado River…with free beer, hugs, and the horizontal hokie pokie right on the trail from camp down to the boats. Those stories will live on forever!

And btw, String: As a red-blooded American hetero male, any topic heading with the term “Naked Lady” in it, I am going to read every time. Such trip reports (even with slightly altered phrasing)are always welcome >:)

–Oh geez, my wife was reading over my shoulder and just slapped me.

Sex sells. My wife hasn’t read it but she would just give me THE LOOK.

I was at an RV park on Lake Martin tired after a windy paddle. It wasn’t the boats that kept us up but the continuous stream of golf carts making rounds, playing stereos until 11pm that kept us up.

I think kayak camping a long paddle before camping makes the hard ground less of a problem. It is also best done when things are cooler and the fair weather partiers aren’t out.

Agreed. We were caught in an evening summer celebration.