My new solo canoe came with a foot brace and I may also put one in my MR Independence. Is there a rule of thumb for how far to have the brace set from your seat? Should your legs be completely straight or slightly bent?

Whatever is more comfortable for you. I prefer slightly bent.

Slightly bent, but why not make it adjustable -able to move forward or aft a few inches.
I have seven canoes, some tandem and some solo, and that is how I have all of them rigged

I also agree with slightly bent, and adjustable. I’ve put a Wenonah adjustable footbrace into a couple of strip-built solos and have been happy with them, especially for the price.
https://www.wenonah.com/Items.aspx?id=29

The foot brace that came in the canoe is adjustable by moving the fasteners into different holes. I’m planning on switching over to wing nuts to make that a bit quicker to do.

I was looking at the Wenonah foot braces, ptickner. Did you drill through your strip-built hulls and use rivets to attach the side brackets?

For the Wenonah footbrace, I use the large head rivets in Royalex and epoxy studs in fiberglass and Kevlar. When you position the brace, make sure that if you are average height and leg length, the bar is centered fore a 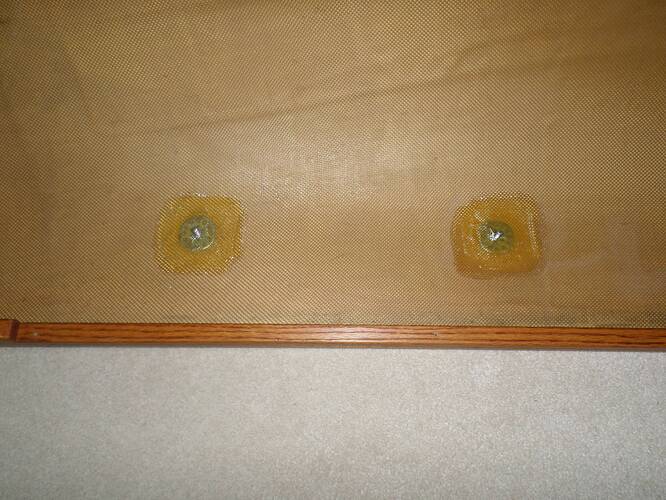 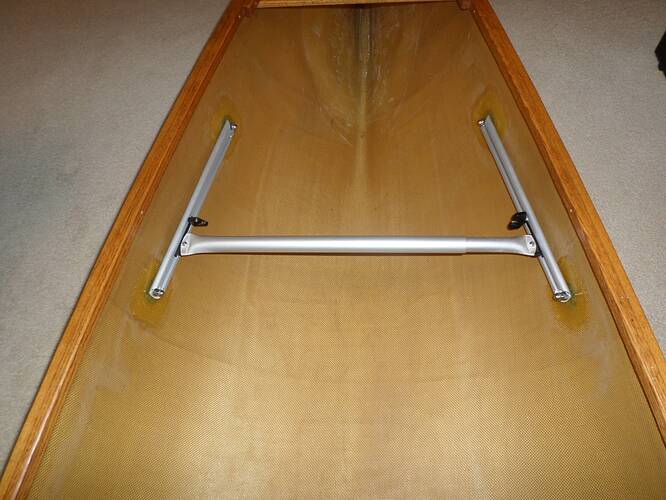 I have used Wenonahs with just large head aluminum rivits.

I have also made several using 1" aluminum angles rivited to the hull with large head rivits. I drill holes every 1-1/2" and then use a stainless bolt with a wing nut to attach the foot brace. I use a aluminum tube with a slightly smaller one in it, (to compensate for the change in length) for the foot brace.

A adjustable foot brace works good if you have an adjustable sliding seat.
I have made several of those also

I attach the Wenonah braces exactly like Out of Line shows in his pictures. I’m 5’11", which I figure is a little taller than average (men and women) so I position the braces to reflect that.

Thanks for all of the suggestions guys. Out of Line, where do you get those studs and what kind of epoxy do you use? Are the studs threaded?

@RobF said:
Thanks for all of the suggestions guys. Out of Line, where do you get those studs and what kind of epoxy do you use? Are the studs threaded?

You can get the studs from Pygmy boats (10-24 threads) or CLC https://www.clcboats.com/shop/products/boat-gear/kayak-footbraces-rudders/internal-footbrace-mounting-kit.html (1/4-20 threads). If you opt for the bigger threads, the Wenonah footbrace mounting holes will have to be drilled out to accommodate. I prefer the Pygmy bolts, 1/4-20 is overkill. I use G-flex Epoxy from West Systems available on e-bay. If you go this route, make sure you lay the boat on its side so the position of each stud when epoxied is LEVEL, otherwise the epoxy will run.

Let’s see a pic of that Independence of yours! I just bought one and will be installing the Wenonah footbrace soon.

Thanks again for all the information. Very helpful. I’ll try to post pictures of the Indy a little later when I have a chance.

You can certainly use West Systems G Flex epoxy to 'glass in the studs, but there is no advantage to using G Flex on a composite boat and a couple of potential disadvantages.

G Flex is formulated for enhanced bonding strength to plastics such as ABS. Conventional epoxies like West Systems 105 resin and 205 hardener will provide as good or better bond to composite hulls constructed with epoxy or vinylester resins. G Flex is considerably more viscous than 105/205. This can make it a little harder to fully wet out fiberglass cloth if you are using it in cooler ambient temperatures, and it cures to a honey color. That certainly won’t look bad if the interior of your canoe is Kevlar, but fiberglass cloth fully wet out with West Systems 105/205 will be nearly completely transparent and less visible when cured.

Assuming you do not have any fiberglass cloth or epoxy, I would look around for the West Systems 105-K fiberglass boat repair kit. You can find it on Amazon and many other retailers for around $30. It has eight small packets of 105 resin and 205 hardener in the correct mixing ratios as well as some E fiberglass fabric, mixing and application tools, and some fillers. You won’t need the fillers for this job.

There is a natural tendency when marking the positions for the studs to secure the foot,brace rails to align the rails parallel to the sheer line of the canoe. Since the sheer line of the boat rises toward the stem, this is not what you want. You want the studs positioned an equal distance above the floor of the hull so that as you move the foot brace forward or aft it does not rise up or fall relative to the bottom of the hull.

i personally like to 'glass in studs and such with 2 concentric circular patches of fiberglass. although they can be rectangular if you wish. Make one patch a little bigger in diameter than the other, and cut small holes in the center of each for the stud. You can do one side of the boat at a time and one epoxy packet may be enough to wet out all four patches on a side if you have everything cut out and ready to go. Place the stud in its pre-marked position and apply a light coat of epoxy around it out to the diameter of the larger patch. Put the larger patch down on the hull, and wet it out with epoxy. Immediately place the second smaller patch over the first but align its fibers at a 45 degree angle to those of the first and wet out the second patch. Then repeat the process for the second stud on the same side.

Even with the relatively fast 205 hardener, the mixed epoxy should have sufficient pot lift to wet out four patches in this way.

One trick I learned (the hard way of course) is to wrap a little blue tape around the threads of the studs to keep the epoxy off of them while glassing them in place. Much easier than trying to clean the threads later!

Yes, that is a good tip. I would also mask around the perimeter of where you plan to lay your patch with masking tape. Easy if you use rectangular patches. If you use circular patches, just use short pieces of tape and it doesn’t have to be a perfect circle. This will avoid slopping epoxy where you don’t want it obviously, but will also show you where to apply your epoxy before laying on the first patch and will help you avoid distorting the patch as you lay it on the hull.

@RobF said:
Thanks again for all the information. Very helpful. I’ll try to post pictures of the Indy a little later when I have a chance.

That would be great. IMHO, the Independence has the most beautiful lines of any canoe ever made. If you decide to move forward with the Wenonah footbrace, message me, I have a couple of other tips that would take too long to outline here. 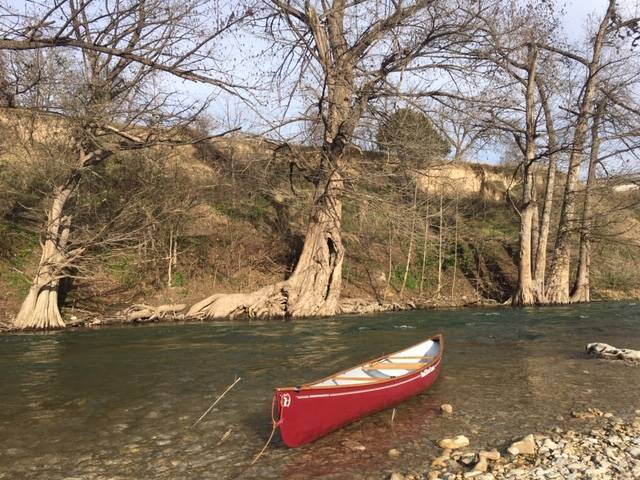 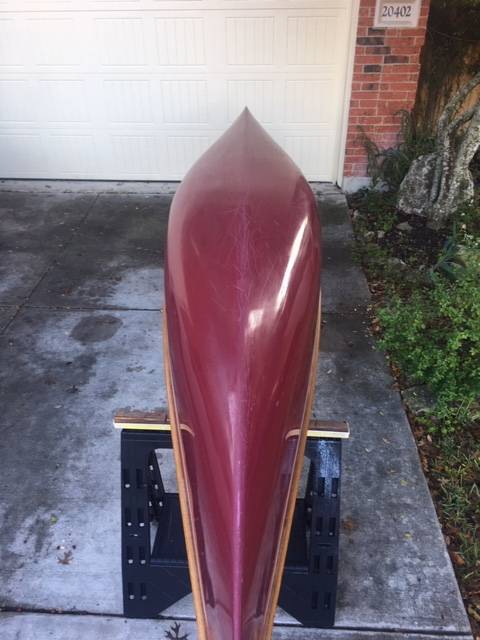 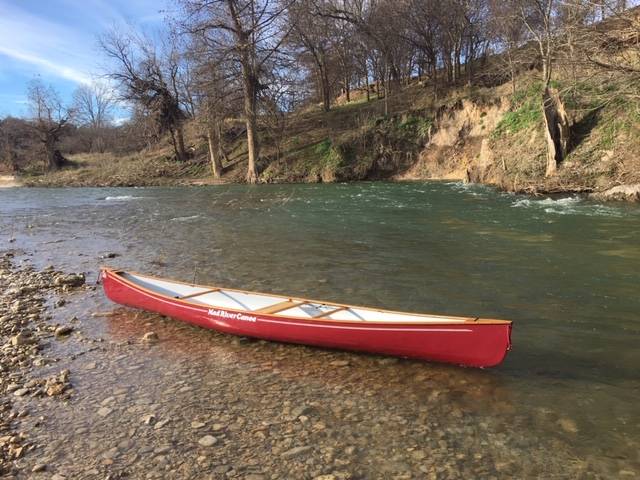