Hi, I’m a fairly basic paddler who likes to hit the local lakes with my kayak. I’m thinking of switching to a solo canoe so my dog can tag along. Ones I’ve been considering are the Wenonah Wee Lassie and Nova Craft Trapper. Stability and tracking are higher priorities than speed. I’m 5’1" and 120 and my dog is another 90. Any pros and cons on the Wee Lassie vs the Trapper or a third option you’d like to recommend?

My wife is about your size and absolutely fell in love with the Slipstream Wee Lassie when we tested it a few weeks ago. Just waiting for it to be built now.

13lbs and great stability. It is tiny though, so a 90lb dog might find it tight.

I weigh about 210 and enjoyed it as well, so the weight isn’t an issue, just space. I just needed to move the seat back something like 10-12" to get it to track right. Easy to do with a kayak seat

We got their 10’6" model. It was big enough that my wife could take one of our kids out (3 and 5 years old) and when they get bigger, they’ll be able to take it tandem.

We also ordered a slipstream sacandaga, but that is a much larger canoe.

With more weight you need more volume . While you CAN jam 200 lbs into a 10 foot boat be aware that that length craft was designed for under 120 lbs. You CAN paddle it with 200 lbs but how much fun is paddling a log? The original Wee Lassie was designed to fit the needs of a tubercular 90 lb man.

12’6 is a better choice and I still have reservations. If the 90 lb dog is up front trim is affected because there is not much room to move the dog more midships. And the dog may be uncomfortable enough to stand all the time which is never fun. Heavy weight in the bow vs the stern makes the boat harder to steer. It may wallow all over the place.

Having had dogs in canoes all the time for many years I find that the longer the boat the more comfortable for the dog. But they vary so much in behavior. My 90 lb Golden was antsy in a Merlin II in waves ( she would always stand) but fine in the same length of boat in a Placid Boatworks Rapidfire and the best in a Swift Raven ( which is 15.5 feet long and roomy, a river solo canoe)

So yes weight and distribution of the weight is an issue. Best to take the dog with you for a test paddle.

I found the wee lassie to be comfortable and quite nimble when I paddled it, but that was just a short while. The rated capacity is up to 330 lbs and slipstream can adjust the depth as needed. A place like slipstream can also adjust thwart locations and seat placement if they know the weight of your added passenger.

Rated capacity is aribitrary. That is probably the weight required to still preserve 6 inches of freeboard. Performance capacity is much less. Placid Boatworks 12 foot Spitfire with 6 inches of freeboard can carry 480 lbs. Just cause you can does not mean you should. This means that with the typical pack canoe height of 11 inches the boat is sunk 5 inches in the water… At four inches waterline the burden can be much less 250, at three inches 170.

This is not a manufacturer dependent figure. It is based on volume of water displaced.
What does this mean to the paddler? Hull cross section is paramount. A flared hull can be relatively stable when almost filled to capacity. One with tumblehome will become less stable. Also the more the boat is sunk in the water the more it exhibits inertia… resistance to slowing accelerating or turning.

Most manufacturers list a performance capacity. That is a different number. It is the weights that displace two to four inches of water. Hulls are designed for optimal performance at these weights.

Sure I can paddle a canoe full of water but is it a great idea? Just cause you can does not mean it is the best idea.

I don’t know what to tell you. I enjoyed paddling the wee lassie and fully intend to do more of it, plus with gear. Is it smaller than I’d like, probably. Does it provide enjoyment on the water? Definitely.

If the dog goes every trip, you want the Trapper or a small tandem like the Esquif Huron. I would definitely want to test paddle with a dog first, though. Honestly with that 90 pound swing in weight distribution, you’re looking for a small duck-hunting canoe.

The Trapper looks like it might work well since it’s wide with a lot of capacity so might take the dog’s weight without getting excessively front-heavy. I paddle solo canoes with a 60 pound dog and I weigh more than you. If a solo is well-balanced with just a paddler then adding a 90 pound dog in font of you can make it front heavy which makes it hard to control (the light rear end likes to spin around) and the effect will be worse for you since you’re light. If you could try a Trapper with your dog it might be fine. You might ask the dealer if they could move the seat back 3-4 inches for you if it turns out you need it. Remember to put a yoga mat or rubber backed rug in the boat so the dog has secure footing.

This Swift would be a good choice I think. I think it would work well with you alone and it could easily handle the dog too. They offer a sliding seat as an option and that’s exactly what you want since it lets you slide back so the dog’s weight won’t make it so front-heavy and sliding back also makes more room for the dog (in the middle…where the dog needs to be). It’s a pretty expensive boat and I imagine you might have to wait a while to get one if you order one.

The Prospector 14 is the quintessential multi-purpose solo boat. If you prefer traditional paddling while kneeling with the boat heeled over, or sitting upright with your feet forward, the Prospector 14 can accommodate any paddling style. A... 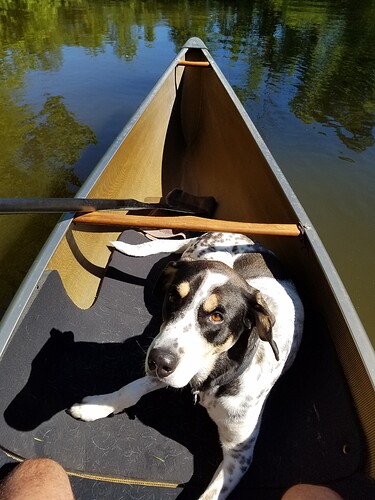 I think the bottom line is that when evaluating boats you take the gear that you expect to use with you for your test paddles. This includes the dog. The dog really dictates what will work. In the OP case we have her size then add a dog. A dog matters because it is a live load. 235 lbs contributed by a stationary mass and 235 lbs added by half a stationary mass and the other adjusting a lot is way different.

And you need to paddle multiple boats. Pcom is loaded with 10 star ratings from people who have had a good time with inferior gear because it is all they have known. Sure I can have a great time paddling a raft but until I have compared to something else its just emotion.

Safety is first and even on flatwater bad things can happen ( the tragedy on Opeongo last month comes to mind) with overloaded boats.

The hunt for a boat is part of the fun but try not to get paralyzed by too much info. There are multiple choices.

Thanks for the advice. I realize a small solo plus a big dog is not the best combination for responsiveness, but when I’m out with her it really doesn’t matter. The main goal is just for both of us to get outside for a while and at 11 she doesn’t like long hikes as much as she did. She does well in my tandem when I have someone with me but that thing is just too big for me to load and launch on my own. If I need the extra acceleration and maneuverability on an outing, the dog can stay home.

My dealer recommended the Trapper so I’m going to try to schedule a test paddle on it, even though winter is closing in fast. The sliding seat would be nice, but it shouldn’t matter as much if they move the thwarts enough to give her room to sit at my feet. The swift does look nice but unless I get a steal on a used one, it’s outside my budget

What state are you in? I have a Kevlar Wenonah Fisherman that’s a nice, light flatwater boat. The trade off is width for speed though.

You might also ask your dealer about the Bob Special, a cut down prospector for flat water.

I’m in Pennsylvania. I did look at a few lighter tandems but didn’t find anything in my price range. I’d like to stay under 1500

A used Kevlar tandem in dog paddling shape can be found around $1,000. I see lots of them advertised in surrounding states. Ohio has lots of listings, PA has more. Here in Michigan the wind blows every day, so people tend toward aluminum or Tupperware. My solo came from PA…

There’s a “solo canoe” group on Facebook that I joined this week. A person just posted they are getting rid of a Wee Lassie. He hasn’t posted it for sale yet, but heads-up!

So theres a mohawk challenger in new york but its far enough away I don’t really want to go test it unless I’m pretty sure I want it. Anyone have any experience with challengers?

I’ve had a Challenger for almost 30 years. It is my favorite solo. Good combination of tracking and maneuverability. I’ve never had a dog in it, and just do day trips. It weights 49# per the catalog. I also have a Royalex Wenonah Vagabond and a Mad River fiberglass Independence.

Bill McNaull, who wrote “My Travels by Canoe” paddled all the navigable water in Pa, mostly in a Challenger.