Does anyone have any suggestions for carrying a sea kayak.

I’m not talking about transporting on your car but more in the vein of moving it from the car to the put in, or on a portage.

I have a 17.5ft kayak, that weighs in at about 60lb total. I have a cart, specifically a C-Tug Kayak cart which is great for about 90% of my hauling options.

However over broken ground, or on some of the walkways to a dock facility (Philadelphia, I’m talking to you.) its impossible to use as they instituted a ramp with switchbacks so carrying the boat is the only option. Or even kayak camping where having the cart stowed, is not an option as it’s eating into valuable storage space.

Unfortunately my boat doesn’t give me the option to easily shoulder it and even if I do get it shouldered the length makes balancing it quite difficult. EG: once an end decides to touch down, you’re pretty much going to have to let it do that then readjust the shouldering.

SO I was wondering if there was any sort of carrier made for sea kayaks (Other than having a second person.) that allowed you to easily carry a boat.

The Universal Kayak Yoke by Hidden River Yoke Shop was specially designed to solve the problems of portaging kayaks. With their various cockpit sizes and general bulky shapes, kayaks can be a bear to portage. The 3" risers on this easy to...

I’m an average sized woman (5’ 5") and started kayaking in middle age (at 52) so I have used various methods to try to transport boats. Everybody has to work out their own system depending on your strength, balance and type of boat. I have had but rarely used carts, preferring to carry since I mostly have had steps and hills to negotiate even to load from my property.

With a couple of the heavier hard shells I used to have I found shouldering them burdensome due to the factors you describe and the discomfort, even using my PFD to cushion the coaming cutting into my shoulder. I found with some of them that if I could lay the boat in the grass upside down then lift the stern and walk my way forward to the cockpit, I could stick a zipped up PFD onto the kayak seat, rest my head on it, grab both sides of the cockpit, bend my knees and then lift up straight tipping the bow up so I was carrying the boat resting and balanced on my head and held at both sides of the cockpit. Sounds nuts, I know, but I carried a 64 pound 17’ Dagger Magellan that way many times and found it easier to pivot onto my roof rack than trying to load from my shoulder. I still carry and load my 32 pound solo canoe that way, over my head and held by the gunwales. Having a heavy weight directly over your center of gravity allows you to use your legs, usually our strongest body parts, to carry loads with the least strain.

You might be able to Macgyver something similar to a kayak carry strap pictured in the link and test it out at home: http://topkayaker.net/Articles/Instruction/KayakCarryStrap.html

I’m just not sure if that would even be workable for switchbacks since you’ve got 17-feet of boat to maneuver through tight turns.

I made something like what Rookie posted. It was OK but the kayak banging on my side took its toll. I still think it is a reasonable solution, just not for me. I carry a foam block I shaped that slides onto the coaming between the cheek plate and onto the knee brace. It works pretty well but I only take it for day paddles. I can’t spare the space for a long trip. Day trips and camping for a few days only.

@3meterswell, @Rookie Hence my ask, on what everyone thinks.

Normally for a day trip, I’ll just pack my C-Tug in the aft compartment. Since it breaks down, it fits nicely there. However it does take up completely the Aft-compartment.

So I was asking regarding especially for longer trips and Kayak camping, as I just cant afford to lose that compartment for my bigger camping items.

The Strap thing looks interesting. as it does not take up too much valuable cargo space. And I suspect it wouldn’t be too bad for short portages (100 yards or less.)

Of course you’re right it probably wouldn’t help with a switchback ramp. Unless I hung it on the outside of the ramp. then it’d be bouncing against the railing as opposed to me. I guess the only way to know for sure is to try it.

I’m not sure I’m strong enough to hoist the kayak over my head to use something like this.

Is there a trick to getting it on your shoulders? I kinda struggle to do an overhead press with the boat to put it in the J-Hooks on my outback. Some of it is due to being old, some of it is due to just the unwieldiness of the thing.

To that point I stopped using the Subaru J-Hooks and opted for the Malone ones, with the Kayak loader ramps.

Since my boat has a rudder, Flipping it upside down on the ground might be a bad thing. I assume you have one of these so any hints would be helpful.

Support one end. Nothing says the bow has to go first. I have a Monarch and it can be done letting the bow rest on the ground and “rangering” backing into position into the yoke. Rudders don’t like to be ground into the ground for sure.

Google canoe portaging… you can balance it on your legs and then use your back to get it overhead
Like this . I have not done it with a kayak. In portage country I vastly prefer my sub 40 lb canoes over my 56 lb Monarch! But take a look anyway 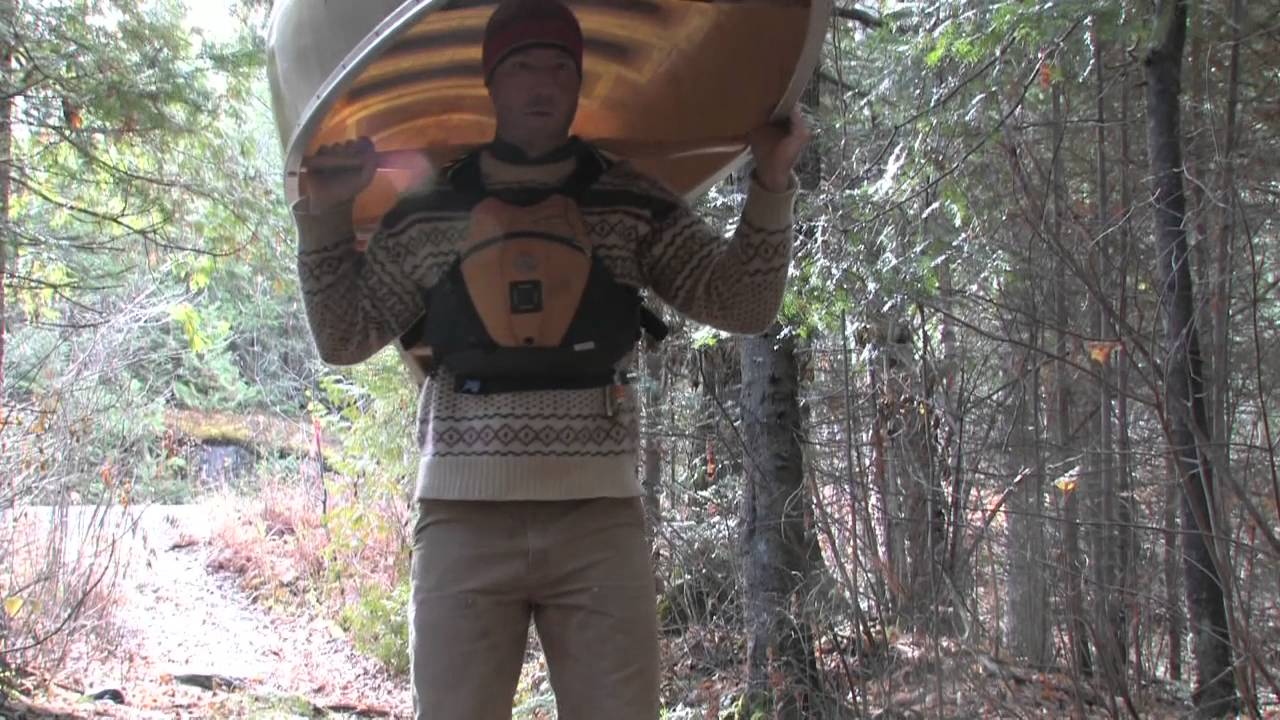 Of course, the ideal strategy is to not own a boat over 45 pounds. My fleet are all that or less: 24, 27, 28, 31, 32, 39 and 45 pounds respectively. No problem getting any of them on my shoulder, though I did switch to the “head inside the cockpit” method with the 45 pounder until I built a garage last March and can now carry in 15 feet to the car instead of over 100 feet including up a hill and a flight of steps from my walk out basement back door up to the street. All my heavy kayaks and the big canoes are someone else’s burdens now.

A technique and a device that may help:

This reduces the need to deadlift the entire thing onto your shoulder.

Secondly, I swear by this padding used by camera operators:
Shoulder Pad

Which prevents the coaming of the kayak from digging into extremely sensitive muscle/nerve bundles along the shoulder.

For the kayak coaming/shoulder issue that happens with some (most) kayaks, try using a 1 - 1.5 foot section of $1 pool noodle from Dollar Tree and cut only one side of the noodle. Then place it on the coaming when needed. .

I had a commercial version of this type of carry strap - man I did NOT find it useful. I eventually cut it apart and used it to suspend the kayak from the rafters, since the straps were high quality and came with big, beefy plastic buckles. I wouldn’t waste time on this, I don’t think it will help with the situation described.

@AlwaysWet I looked at the pad and can’t envision how it goes on you. Can you explain, or show how it attaches?

I had thought about this, though I was thinking the Pipe insulation, I had not even considered the Pool Noodle option which could probably work better as they are larger diameter.

That was my method of getting kayaks onto my shoulder. The lightest one is a WW boat at supposedly 27 lbs. The heavies were in the 57-60 lb range (more than half my own weight), and I stopped shouldering them when I got into my mid-50s. I used a portage cart if I was alone.

For coaming edge dig-in when I used to shoulder carry, I folded up a small towel or Shamwow kind of cloth and put it on my shoulder.

I finally decided it was time to get a much lighter boat, so the glass sea kayak is for sale. The surf ski I bought is less than half the weight and I can carry it solo. However, the question of carrying skis solo has also come up despite their light weight, The difficulty is in getting a secure hold on them (no coamings) and their length, especially for non-tall people. People have tried both commercial and DIY slings, apparently without great results. I experimented a bit using the (nonwaterproof) furniture lift straps that U-Haul sells and found it too iffy. Ditto for a pair of standard straps.

For me, the solution was to ditch straps altogether and carry with my two hands, tucked over my hip bone. Paddle gets disassembled and slid under the “rear deck” bungies, and my tiny Pelican box holding car keys bungied at the front of the footwell. I make absolutely sure that my hands grip the ski in the right places to keep it level—and this has to be done with the ski still in the water when taking out, or still over the trailer crossbars when preparing to launch.

If you decide to try a sling method, you will need to be equally as careful about determining the balance point that allows you a reasonably safe, stable carry. Practice over shallow water!

Good luck. Long boats are a blast to paddle but definitely a PITA to transport either on vehicle or person.

There are two adjustable loops, one goes over bicep and into the crook of the armpit, one crosses your chest like a messenger bag. They hold the pad — a sandwich of rigid plastic and cushy neoprene — right where your neck meets shoulder.

@AlwaysWet I think I’m first going to try the pool noodle thing to see if that works for me, if it does then the better camera carrier should be perfect.

If not then drop back 20 and punt. then I’ll look into slings and finally the portage carrier.

Hey that strap idea sounds good; maybe a moving strap or a heavier towing strap. But I hope you get to paddle with a friend, who also has a long boat, so that the two of you can carry both boats together, one end in each hand. You just can’t beat being out of a morning on the water with friends!

I got a strap since that was the cheapest option. However have not had a chance to test it out.

Last big storm that came through well damaged my garage so I had to have it re-roofed, and the door was blocked by a big dumpster so I couldn’t get the boat out. then on the heels of that the Old pool was removed so currently my storage shed is blocked by a damn big excavator.

Ages ago a friend of mine cut a kidney shaped piece of plastic paint bucket, cut two notches in the end of the lobes from the belly side and put a small carriage bolt through the apex of the belly side, head side down and capped it with some washers and an acorn nut. He would slip the notched ends around under the shoulder strap of his pfd and then the kayak coaming would sit on this pauldron (letting my SCA medieval reencactor background slip) but would keep from slipping off by means of the post of the capped bolt. Certainly keeps the kayak from digging into your shoulder and less work keeping it in place. It still doesn’t make the kayak lighter. We can talk of that more as I can deliver a 42lb 17 footer to Philly anytime