I’ve looked at several canoes and narrowed it down to 2, the Nova Craft Supernova and the Northstar Phoenix IXP. They are comparable in price, yet I’m not experienced with the materials (Tuffstuff and IXP layup). I’m heading on a walkabout to Canada and Alaska with my mut. My fleet is mostly lake trippers and a Royalex tandem Prospector, so before pulling the trigger based on specs and advertising, I’d like to get some first hand advice. Thanks in advance.

If you can find a Swift Raven in Rx on the used market that is a contender. High volume wilderness river tripper

I’m stuck between these two myself, and have no realistic hope of being able to check either out in person.
Can anyone offer some insight into the difference in performance of these two boats, particularly while loaded to +/- 300 lbs. Is either drastically better or worse in whitewater or calm water?

I am not familar with the Supernova, and have never paddled the Phoenix, but I have done some tripping in my 14’ Yellowstone Solo (ABS) and Wildfire (whitegold), which are similar. I load them down pretty heavy, and they have been fine. 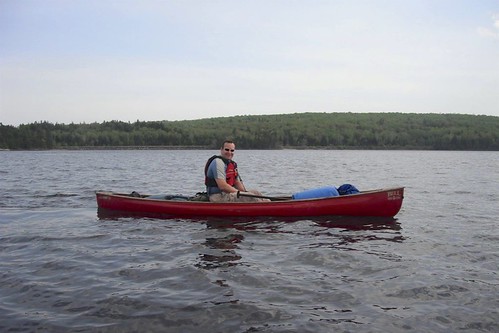 On the Supernova are you looking for the length or the rocker? For 15’ boats, the Swift Osprey and Hemlock SRT are pretty popular around here. Maybe they are not available where you are. Load the boat down and the rocker on the Supernova is not going to make much difference anyway.

The main sell on the supernova, for me, is the extra freeboard. I’ll be doing river trips up to a week in the AL GA TN area. Really want to be able to run as many of the rapids as practicable.
For me, if the Supernova is markedly better in whitewater and even close on the flats, it would be my choice, whereas if the Phoenix is pretty close in the rough stuff and way better on the flats, she’d be my daisy.
If there’s not a discernible difference between the two either way, I definitely want the Phoenix.
FWIW, I’m using an Old Town Kennebec for this sort of trip now, so either should feel pretty darn sporty.

Edit: Between the cost of the boats and delivery, the SRT and Swifts put me at least the cost of a spray deck over these two options. I considered the Argosy, as there are a couple Wenonah dealers around, but I don’t care for the tumble home design and it doesn’t seem well regarded in very much whitewater.

The Raven was designed for multiweek river trips. At 15 inches deep it is one big deep boat. Some complain its got too fine a stem but thats not been a problem for me in up to class 3. Its now inexplicably made only in composite… Not t formex… Try to find a used Royalex one . 15 feet. Not light 65 lbs. Its thick ABS. I had it and the Argosy and there was no comparison… The Argo has a nasty hull cross section for real whitewater and very slim stems.

Tumblehome was pronounced in the Swift but its shouldered meaning the hull has a lot of flare and the tuck for tumblehome just below the rails. The Argosy has a tuck so low it encourages waves to ride up it and lacks the Swifts ability to deflect waves downwards away from you.

No doubt if a lightly used Raven or SRT came up within a reasonable distance I’d be all over it. Realistically, though, I’ve been stalking every classified for six plus months and the only things close that have come up were one Argosy that was beat to hell, one Rendezvous and a Baboosic. Probably shoulda pulled the trigger on the Merrimac. But it was teal.

So…one vote for the smaller boat and one for larger…

Eckilson…how big of a load and what kind of water do you generally do?

@AL_canoeguy said:
Eckilson…how big of a load and what kind of water do you generally do?

This is typical - two big bags, a cooler full of food (most guys fill it with beer, but I really hate freeze dried food) and my Dutch Oven. 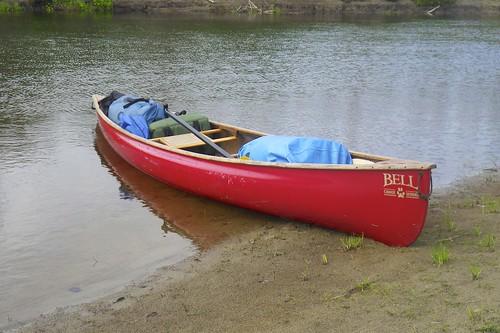 I go 230, so it is quite a load. This was the Moose River in ME and it has a little bit of everything - lakes, flatwater river and a couple of easy rapids. 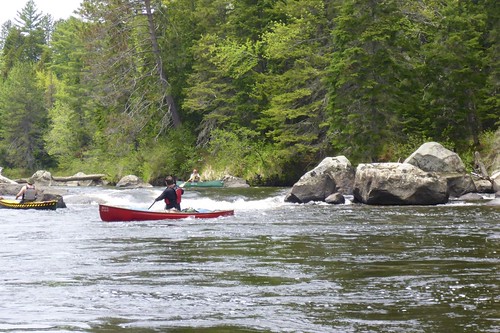 We did the Upper Connecticut River this spring at a great level - lots of quickwater/class I/easy class II. Not the best picture but… 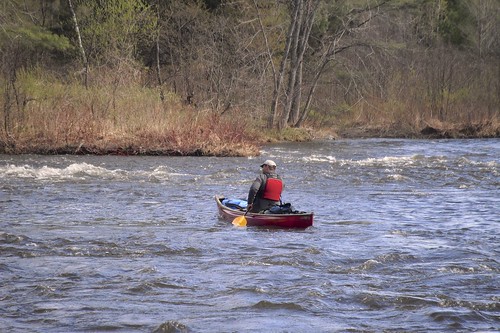 Too be honest, that is about as much as I want to do in a loaded tripping canoe, and my Yellowstone/Wildfire were fine. In those boats I would do class II with no hesitation. I’d think twice about class III, and I don’t think I would feel any different about it in a Supernova.

@AL_canoeguy said:
Edit: Between the cost of the boats and delivery, the SRT and Swifts put me at least the cost of a spray deck over these two options.

If money was no object and I had room for another boat (neither of which is the case), and I was looking for a dedicated tripping boat I think I would go with the SRT. It’s a 15’ boat, definitively has more freeboard, but is still relatively narrow. Here is Riverstrider in his: 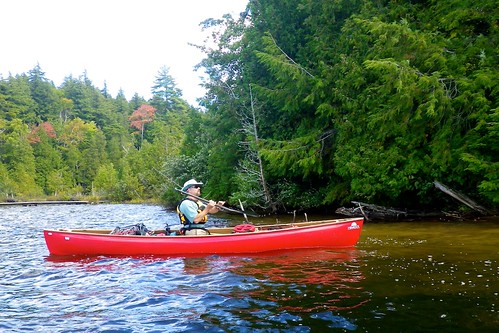 This was Long Lake to Saranack Village in the Adirondacks - lakes, easy rivers. You can see the difference in freeboard here - Jeff in a RX Yellowstone (forground), TommyC1 in a composite Magic (middle), and Riverstrider in his red SRT: 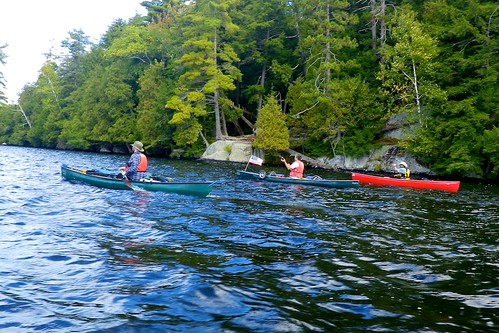 No big rapids on this trip, but a couple of decent portages, most of which were cartable except Raquette Falls which was not. I think back on my trips, and I am just as likely to be carrying my boat as running rapids in it, so weight is definitely an issue.

Just for kicks, here is Riverstrider running the only rapid on that trip - I think it is between Upper and Lower Saranack Lakes (most people use the lock): 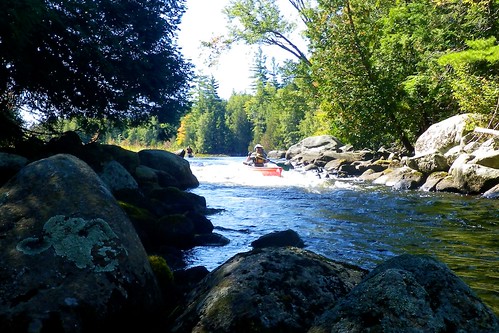 What a great trip that was, I’d love to do it again…

Yessir. If money weren’t a factor I’d probably own them all. Probably two of each so as to have a pretty one and one to really put to work.
Only rapid??? I don’t do that sort of trip very often. One of the trips I’m going to do is the Chattahoochee River…it’s rated at class ii/iii from Helen all the way to Atlanta. With Lake Lanier in between. I know that there will be penance to pay across those 30 miles in most any river oriented hull, but if reduced wind shear is the most substantial advantage the Phoenix has over the Supernova, I think I’d rather have a little extra margin of error through the rough stuff. (The old kennebec taught me how to cope with the wind…in brutal fashion) At the end of the day, running the rapids is a big part of the trip for me.
I really appreciate the help and information. Time to get a boat ordered!

@AL_canoeguy said:
One of the trips I’m going to do is the Chattahoochee River…it’s rated at class ii/iii from Helen all the way to Atlanta. With Lake Lanier in between.

That looks like a fun run - let us know how you make out.

First, disclosure. I’m with Northstar and very partial to the Phoenix, having paddled Wildfires and Yellowstone Solos a lot in the past. I’m posting to demonstrate what the Phoenix is capable of.

Here’s a few shots from an 18 day solo trip on the Thoa River in the Northwest Territories that I took last July. I paddled an IXP in lots of class IIs with me (210lb) and about 140lbs of gear. First is the loaded boat. Other two pictures are rapids that were fun in the Phoenix.

I love the Phoenix for running rivers. 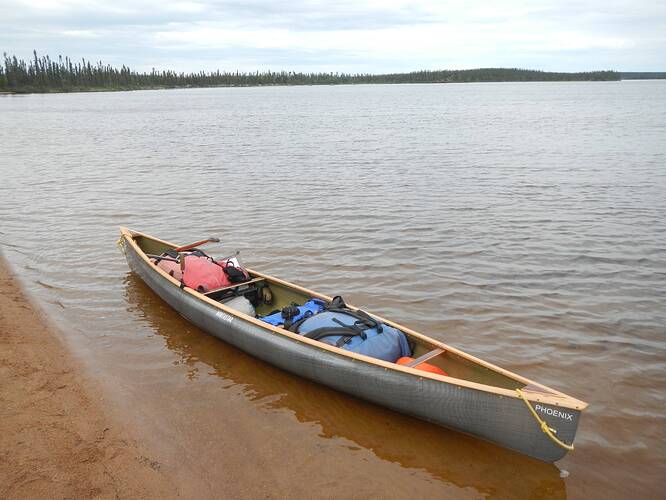 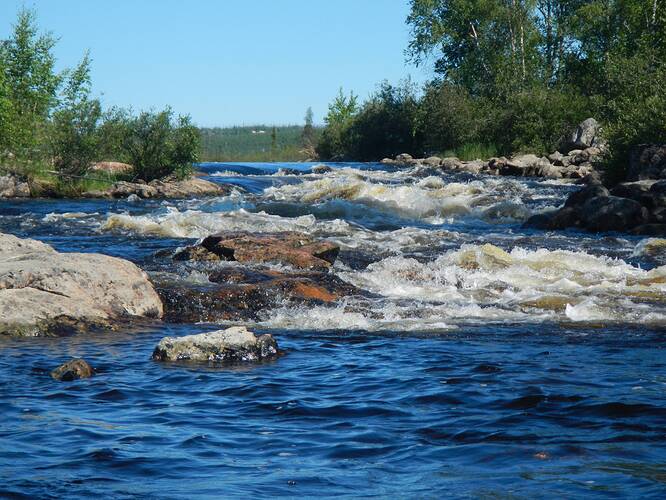 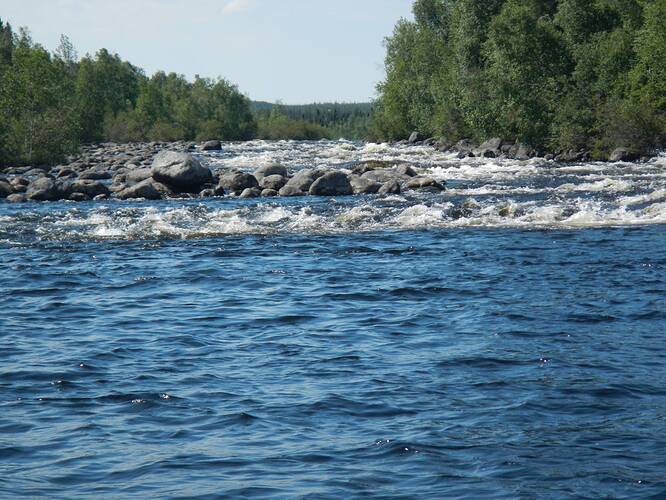 Not to muddy the waters, but have you considered the Swift Shearwater? It’s a really nice solo tripping boat.

Bear— I greatly appreciate your chiming in on the subject. (And, from what I have gathered from my research, you nor Northstar seem inclined to misrepresent your product just to move a boat.) I saw a great video posted on the YouTube by a fellow called Gunnelgrabber who documented a trip down the Bloodvein River in a Supernova. It was nowhere near as impressive as most of the online fodder would have one believe, though he runs much more aggressively than I do. I am leaning back towards the Phoenix and will stick with my Kennebec on the bigger water trips until she gives up the ghost. I may pick up one of the long double blades paddles to help across the lakes (or maybe carry some straws to help suck it up). Being a shorty I think I’ll appreciate the reduced width more than what I ultimately think will be a marginal difference in whitewater capability.

Brian—I’ve definitely checked out the offerings from Swift. But between the higher price and cost to have it shipped, it puts them far enough ahead of the others to take them out of the running. Otherwise, their prospector 14 would be amongst the top of the list.

If you are a smaller paddler you may want to give the Supernova a pass. I’m 5’ 8.5 and was around 180 when I paddled a Supernova & it felt huge. Might have been better with a full camping load. For a similar style hull, I’m much happier with my '91 Tuffweave Rendezvous.