We are in Dillsboro ,NC , literally on the bank of the Tuckaseegee River. This river is rated class 2-3. This is an anniversary trip (49) so there has been no paddling. This morning a bunch of people floated by in rafts , WW kayaks and canoes. And tubes.
Only 2 wrecks. A girl flipped her canoe, stood up and walked it to a shallow spot. A woman hung her rental kayak on a rock and just sat there waiting to be rescued. After 2 guys got her off the rock, they eddied out for a smoke break.
Tonight, it’s just me and the river. 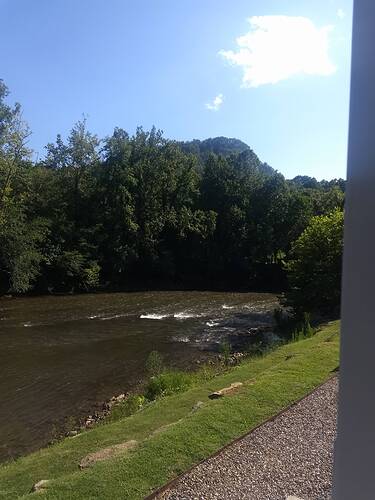 Water is wonderful and ever changing.

We’re drawn to it, which is no surprise since 60% of the human adult body is water.

We’re made of stardust and water.

Every evening we have our glass of wine on the front porch overlooking our very own cascades.
The water is so pure and clear that we can see the trout from where we are sitting.
It is ever changing and never gets old .
We have our own natural swimming hole up stream and our mini waterfall down stream
On Labor day weekend our kids and grand kids will be right in the front yard in our little Keowee kayaks, the Yak board and some tubes

I like rivers…and streams and creeks. I did a little traveling this week to spend time on different water. Pic where you can see the bottom is a river in Central MI and the pic with bluffs in the background is a backwater off the Wisconsin River in southern WI. Last pic is a creek in Michigan. 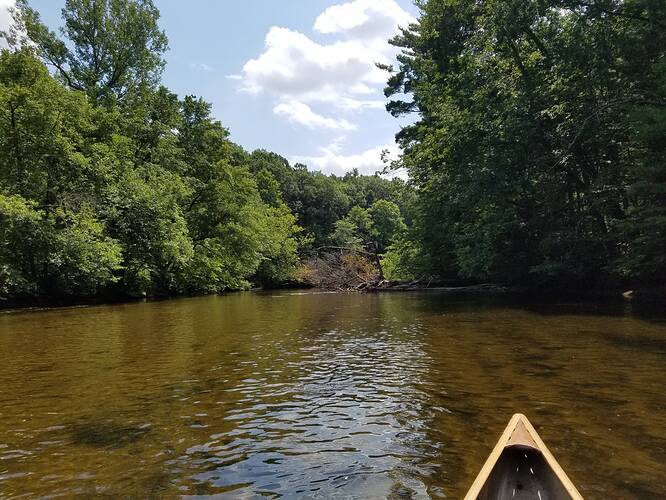 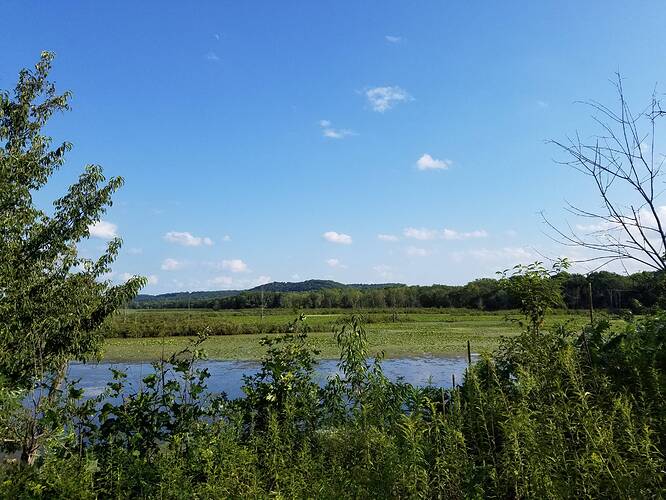 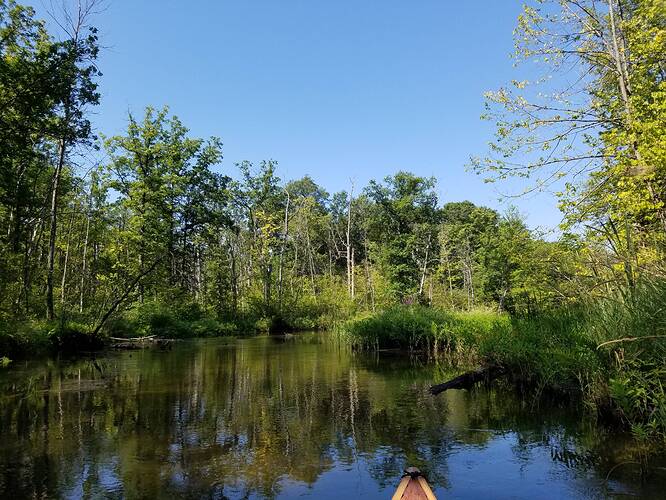 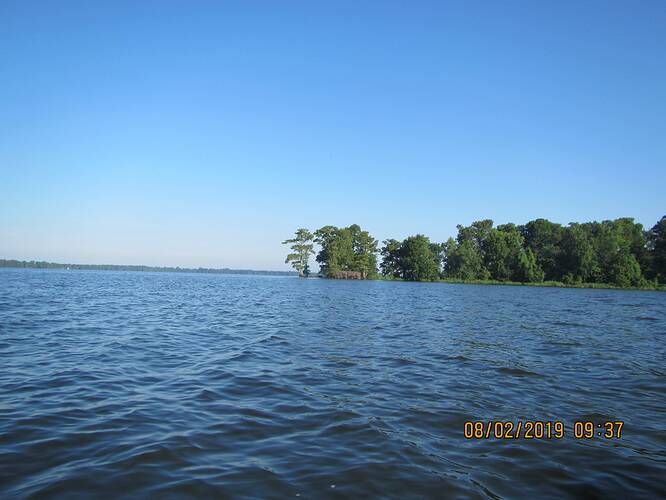 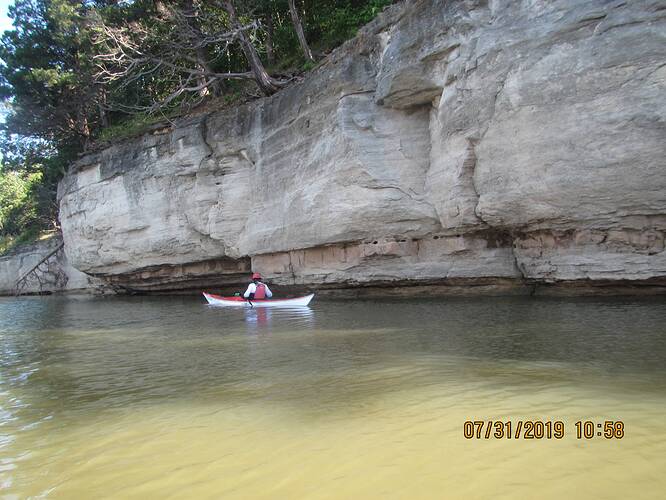 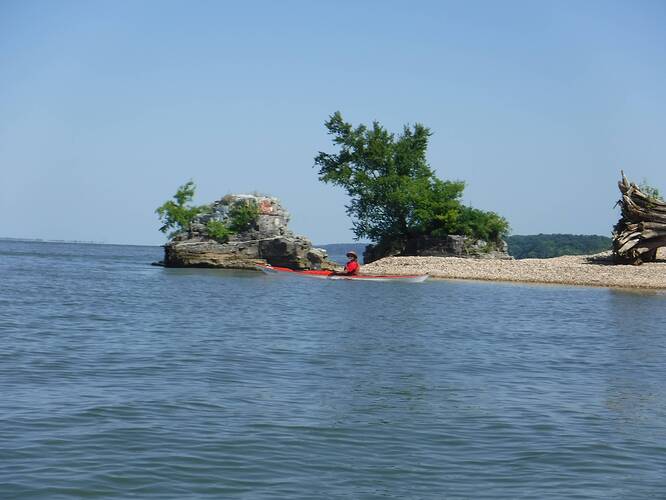 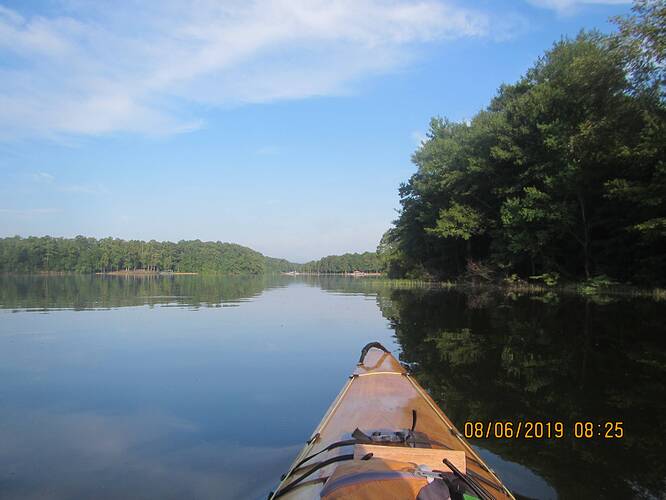 We were traveling. Only made sense to stop at places we could paddle.

@string said:
We came home this morning. Left in the 70s, arrived in the 90s.

We have 98 degrees today. That part is mean.

You wouldn’t be a paddler if you didn’t like watching the water.

I, too, like to just look at it even when I’m not on it. The clearer the better, though roily, turbid snowmelt deluges roaring past hold their own kind of fascination.

A real treat is to be startled by an unusual underwater critter, such as the polka dot batfish (yes, that is its name!) that RAN on the sea floor right under me and the kayak in Tybee.

reminds me of a sea robin.

Rookie said:
"Water is wonderful and ever changing.

We’re drawn to it, which is no surprise since 60% of the human adult body is water.

We’re made of stardust and water."

To reason,
a rippled rhyme,
we watch a flow keep time.

I don’t know if many others do this but through out the year I visit a fairly remote boat landing on the Wisconsin River near where I live. I just like to pay a fifteen or twenty minute visit to the river even if I’m not paddling. I note the water levels and where willows are springing up or where they’ve been washed away by floods, where the ice collects and where the channels first show themselves in the spring melt. It changes with the years, This year I had an accident that has kept me off the water, but I as soon as I was ambulatory and could drive I resumed my visits. There are sandstone bluffs that can be seen from that landing and sometimes there is a song lyric (and I don’t even remember the rest of the song) that springs unbidden to mind. “Solid rock is just sand and water, sand and water, and a million years gone by.” And so it is.

The first time I paddled the Current River down in Mo, as we were all departing from our first rendezvous down there, TheBob took me aside after camp was broken and everything loaded up for the road. A few of us just went down to the shore and quietly watched the river flow for a few minutes more before hitting the road. You know, that virtually guarantees that there will be a return trip. Its not a bad habit to get into on any river, though often there seems an urgency to get going that isn’t really all that urgent. I’d recommend such a delay to anyone. 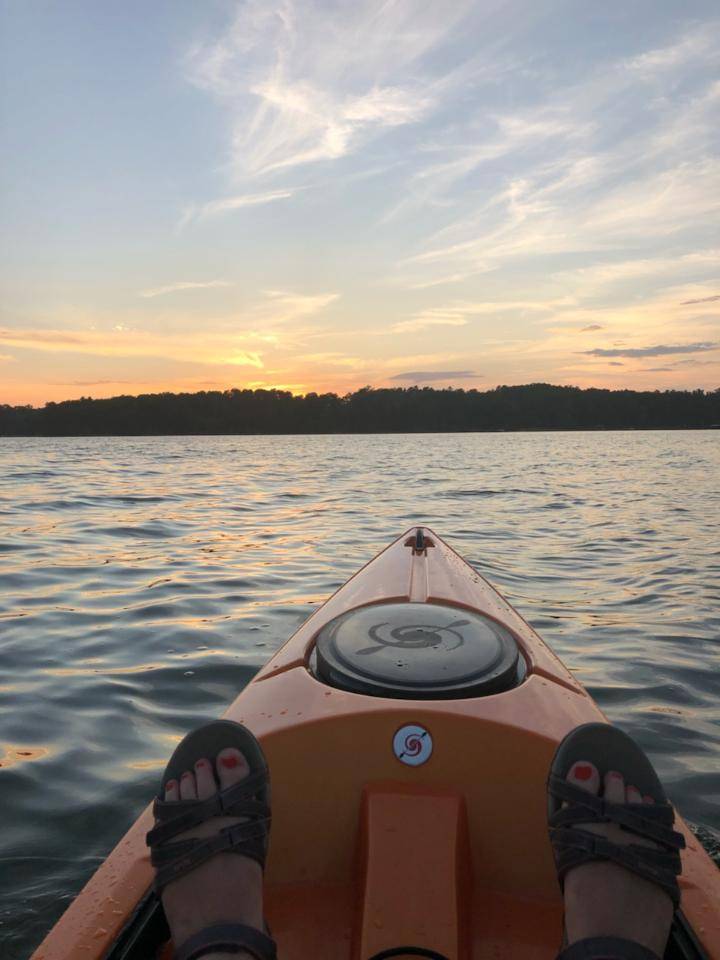 It’s something of a ritual at a family gathering that happens around this time to soak you feet (and sometime more) in the headwaters of the River Jordan. I guarantee you that it will cool your toes. Temps are in the upper 40s year round. 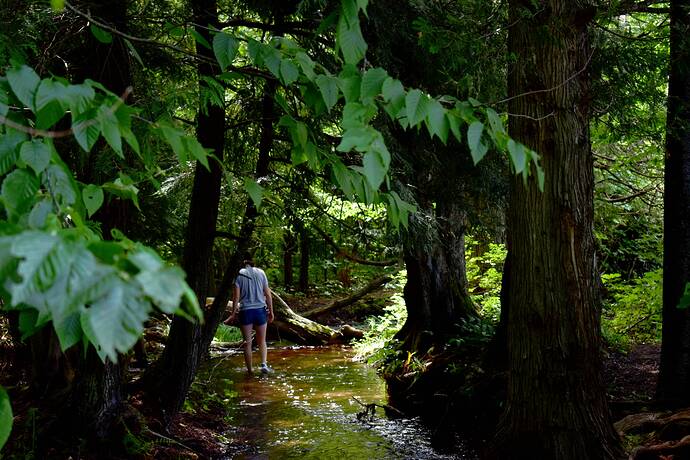 Where is this? Surely not THE River Jordan?

So…this is whats called a …Troll Stream? I know you have troll bridges. HMMM

The beautiful Jordan River is the first river to be designated into the State of Michigan’s Natural Rivers Act in 1972. About 25 miles long, it empties into the south arm of Lake Charlevoix. As rival51 noted, the water is always cold. Good trout, steelhead and salmon fishing.

A lovely river to paddle.

@roym. Only one “troll” bridge here and that’s Big Mac (a/k/a Mackinac Bridge). We trolls live below the bridge.

The Yoopers live above it, on the other side of the straits.