Source for RTM Disco in the USA

Anybody know where I can order one of these in the US? I found what appears to be a wholesale distributor, expeditiontoys.us, but they’ve ignored two emails. I emailed the manufacurer’s HQ in France, and they haven’t answered either.

Action Watersports in Auburndale Fla. is a distributor, maybe they could tell you of someone close to you.

I also found this- RTM distributor page. Just plug in your city, state and USA. It will show you the closest one to you.

Sorry, Craig, I already tried that and all it does is draw a circle around Cleveland–with no dealers in it.

Where did you get more than that circle around our area? I have a20 year old Scupper Pro TW(tankwell) and for a bunch of years have looked at the Disco, but I only saw that Florida distributer. The Scupper Pro is one of the narrower SOT’s out there but that Disco has caught my attention for a long time. I like the midway too.

I typed my location into the dealer locator. It’s default was to a 100Km radius. So, nothing within 100Km of Cleveland. To find one anyplace else I’d have to start inputting other locations at random.

I’ve sent an email to Action Watersports; waiting to see if they reply.

Action Watersports never replied to my email, so today I called them. The guy explained that they were out of stock, and gave me the number for their warehouse.

They might be able to get me one but they’d have to order it shipped from France. The lady I spoke with at the warehouse seemed to be in doubt as to whether the boat would fit in their freight container. That was puzzling to me. Shipping would be mid-November. They’ll be getting back to me soon.

Price is good, $635, but I have to pay shipping from their warehouse in FL, about another $200, and they want full payment up front.

I didn’t think to ask her, but if they had more than just my one order it might be helpful in some way. The guy I talked to at the store said they sold out all their yaks.

The thing I can’t understand is why no US manufacturer is making anything like it, but they seem to be focusing a lot on fishing boats.

They got back to me, and I could get one in the next shipment if I order it soon (next couple weeks?). But, oh, my poor eyes, this is what it would look like … 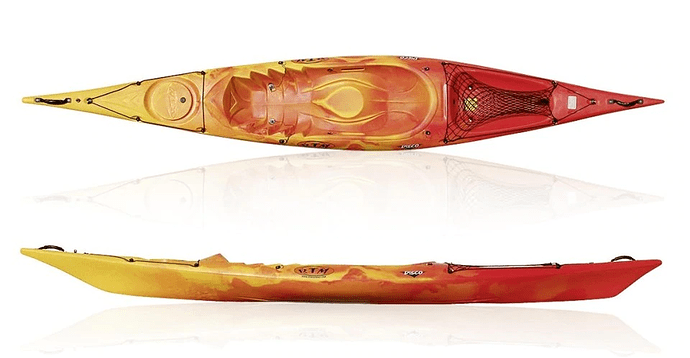 I think I’d hate that more every time I looked at it. I asked to find out what color the next batch would be, and said I didn’t want that glaring in my face in the sun. And, I asked the lady to tell RTM that I wasn’t the only one tired of seeing these smeared color schemes.

Updates as they occur.

Something else you might want to look at is the Cobra Eliminator. They have some basic colors too.

It would be easy to see. Change the deck color with Krylon? I’ve had a couple of yellow boats in glass and plastic. They don’t glare.

Something else you might want to look at is the Cobra Eliminator. They have some basic colors too.

Don’t know why that boat is still on Cobra’s website; the review at Paddling.com says it’s been discontinued. No matter; at 16’6" I’d be unable to make it stay in the 6’ bed of my truck. Also, I don’t want a rudder.

Thanks for the suggestion anyway.

It would be easy to see. Change the deck color with Krylon? I’ve had a couple of yellow boats in glass and plastic. They don’t glare.

I might do that, but I’d rather not if I can avoid it. I’ll wait to see what they say about dates of a different color shipping.

I don’t know why you don’t want a rudder. An over the edge type can lift up if you are in shallow water.

I had an Eliminator for a few years. The rudder on it is good for pulling the bow out of the current after a turn. It is a fun boat with a few weird quirks, but those made me a better paddler.

I use Thule racks on my truck because I have a couple of woodstrip boats I don’t want to bounce around my truck bed. The racks also are necessary for my 19 and 21 foot boats. The Eliminator led me towards buying those boats. It can lead to higher thoughts about kayaks.

The Disco doesn’t need a rudder if you have some basic paddling skill.

Deadline for placing the order to get one in the next shipment is the end of the month.

So what are you gonna order? I think I could order a Midway. I guess I’ve heard poor stuff about shipping by the time it get’s to your driveway.

Another thing…Since they seemed to buy the rights to the Scupper Pro from Ocean Kayak, which I have, those footwell rests were very uncomforable. On my Scupper Pro, there is a flat area above those where you can mount footbraces which I did and it made a huge comfort difference. I can’t see if it would be the same with the Disco or Midway which would be a dealbreaker for me

So what are you gonna order? I think I could order a Midway. I guess I’ve heard poor stuff about shipping by the time it get’s to your driveway.

I want a Disco. I thought about a Midway, but don’t like that big rubber thing in the cockpit; I’d think it would impede your ability to do a self-rescue.

I wouldn’t want a Tempo (the Scupper Pro clone) because it has that tri-hull design. Same as the OK Scrambler I had; the constant hull slap was endlessly annoying. Other than that I liked it a lot.

As to shipping, well, the Tribe I bought from Amazon came on a truck, wrapped in cardboard and covered with a big polybag, and it was okay. The bag got scuffed up some and may have been ripped a little. That might be the best you can expect.