Kevin and I were planning on paddling and camping two nights on the French Broad River from Rosman to Asheville, but had a change of plans due to a day of heavy rain forecasted during the trip. We went in the other direction to Sparkleberry Swamp for an overnighter in the swamp. Plus there are no camping or ramp fees. Kevin brought his dog Sweet Boy on the trip, but after seeing a gator started calling him “Gator Bait”! Especially after he jumped out of the boat on what he though was dry ground but was piled up detritus, sticks, and leaves floating on the surface.

The water was up and rising so we paddled against some current to make Riser Lake with the only high ground we saw on the first day when we crossed the lake to an often visited lunch/camp site. The high temperature both days was about 80, and in the low 50s that night. It was clear with a waxing crescent moon and clear night sky. The barred owls hooted and did their crazy owl calls, herons and cormorants were as raucous with their roosting calls, and the chorus of love lorn frogs competed for top honors. We build a nice fire and sat up into the night. What few mosquitoes that were out were kept at bay by the fires smoke and a citronella candle.

I have an Eno hammock I use to camp in warm weather, but recently bought a Hennessy hammock from String at a very good price as it was a gift he never used. I wanted two hammocks to have one as a loaner. I thought it would be interesting to try a different make. They both have some excellent features. I like the strap/carabiner setup of the Eno, and surrounding bug net. Also the rectangular tarp. I like the inside the bug net overhead line for hanging gear and the bias cut of the Hennessy hammock, and the snake skins used to reduce the hammock and net to a compacted tube that puts it out of the way when sitting under the tarp, and packing the hammock. The Hennessy is lighter (a plus for backpacking). However I modified it to use the eno straps and carabiner hanging system, and attached the Eno tarp to the carabiners to make it a one piece unit. This makes the system weight on par with the Eno. If I was to buy a new Hennessy I would get the side zip net instead of the bottom entry. I liked the concept but found it more fidgety to get into my sleeping bag and thermarest system than in my side zip Eno. I sleep comfortably in both makes of hammocks.

My previous GPS died with all my old tracks on it. Sparkleberry Swamp is a complex of flooded woods, small creeks and guts with many dead ends and shallows. It is confusing and it is easy to get turned around and baffled by the nature of the place. Especially if it gets cloudy. I was pleased with having become familiar enough with the area we paddled to only make one wrong turn when trying to stay on Little Otter Creek (a section I have only paddled once before). We met an interesting character named Randy Cribb who has been going to the swamp since childhood. He told of a possible state record Bald Cypress and how to find it, and we gained some knowledge of the history of the area too. He dives on the Saluda River where I paddle to recover Indian artifacts where a large Cherokee village site is located. He also dives at the coast hunting Megaoldon shark teeth that can be 7” long from tip to base. He had some great photos of Red Snapper he has speared and lobsters he has caught driving in 100 foot waters 30 miles off the coast.

The fresh bright spring green of the Tupelo and Bald Cypress growing in the water add to the magic of paddling the swamp this time of year. We saw an Osprey nest with one sitting on it. The older nest in the area wasn’t occupied, Brown Water snakes were in breeding season as well. Yes spring was in the water as well as the air. We saw a large female with a male as we paddled up Little Otter Creek. On the way back she had attracted a bit more company.

On the way home we stopped at the friendliest barbeque place I have eaten at since my Uncle Louis and Aunt Jo closed theirs in south FL many years ago. I don’t remember the name but it is on the south side of 378 out near the McEntire National Guard Base. The Buffet was excellent and the folks were the very definition of southern hospitality! 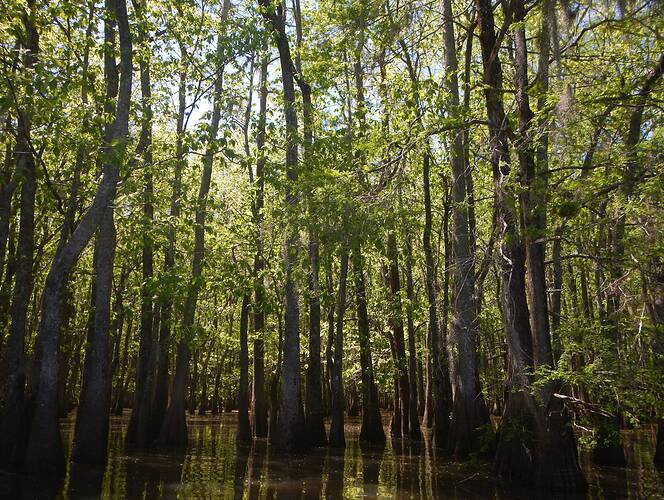 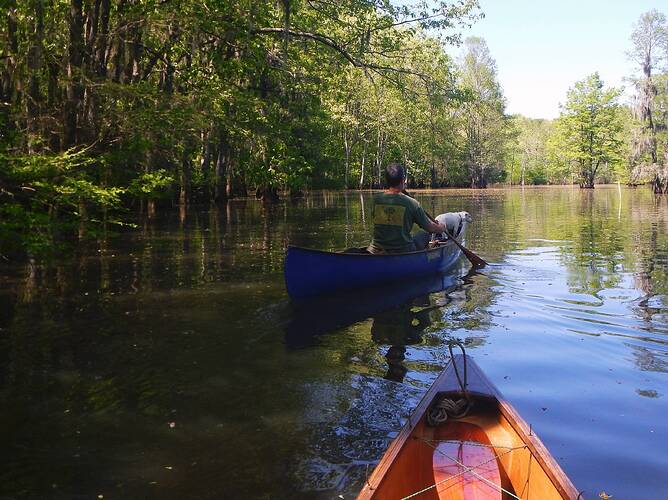 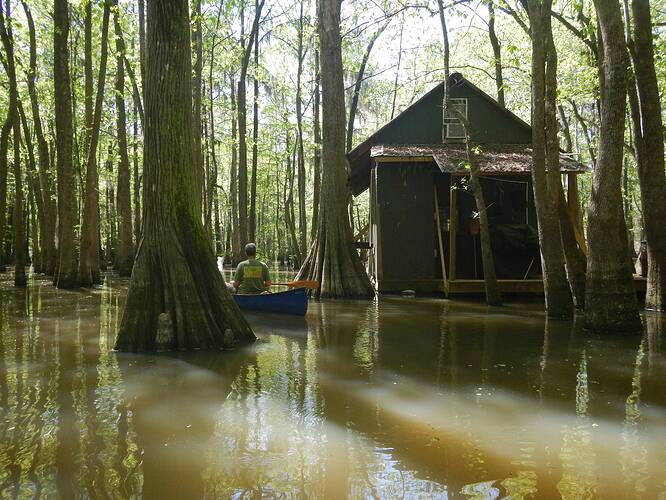 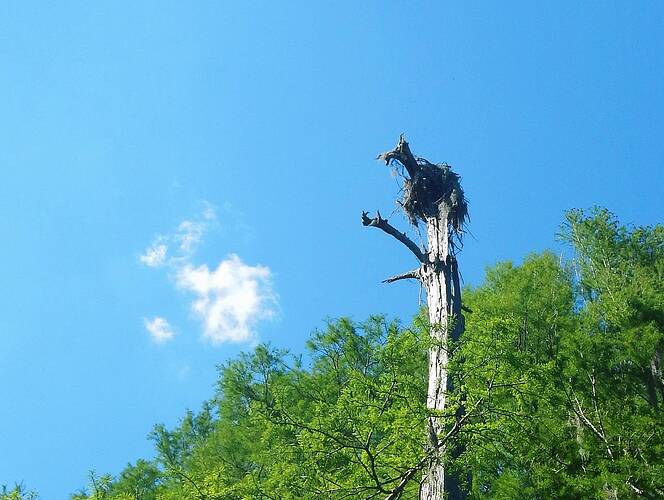 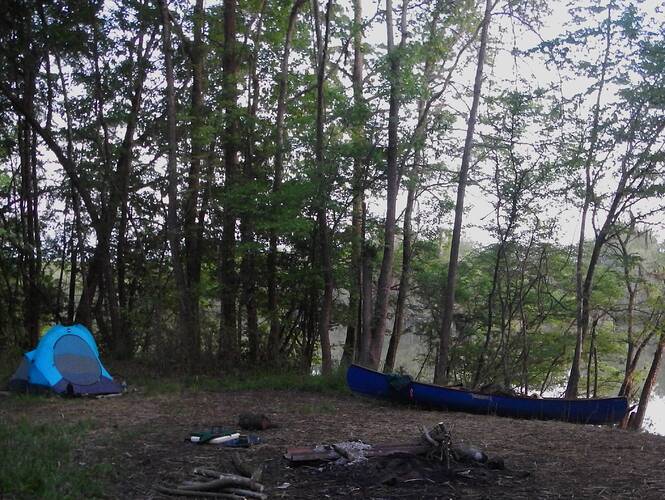 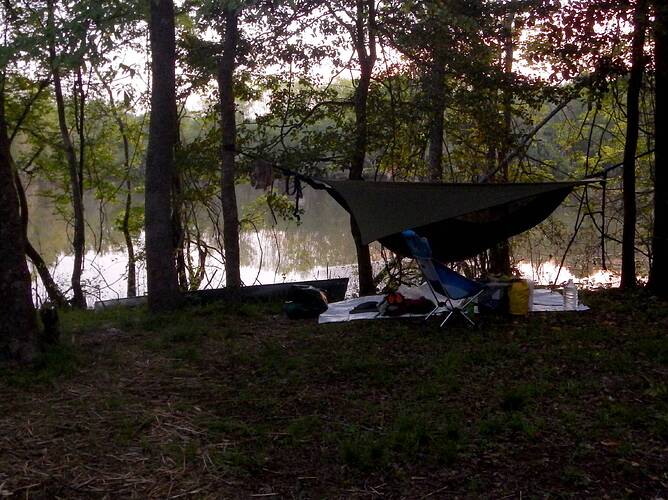 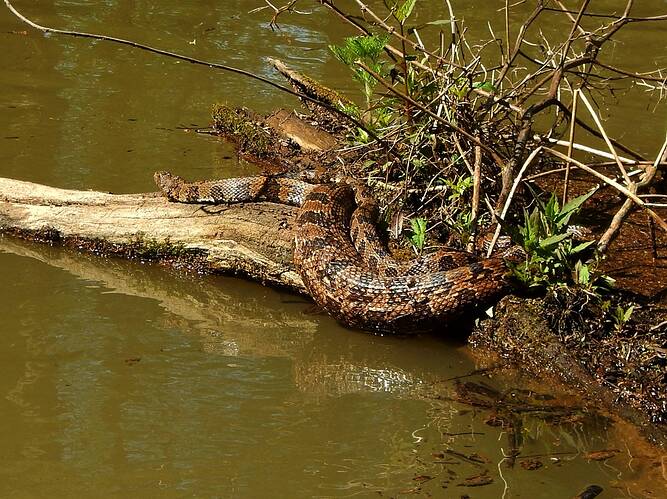 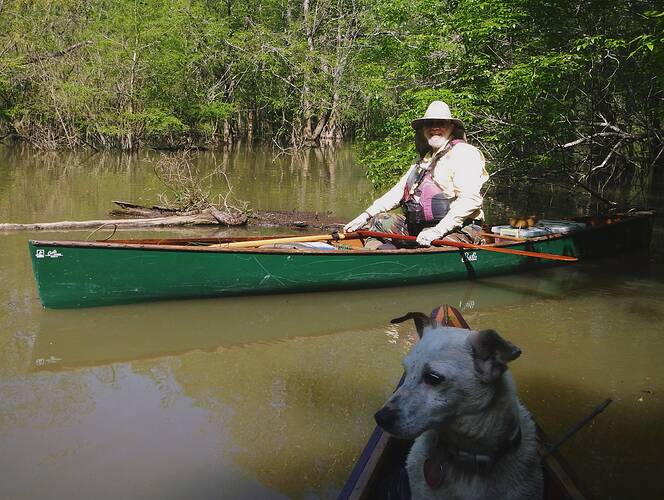 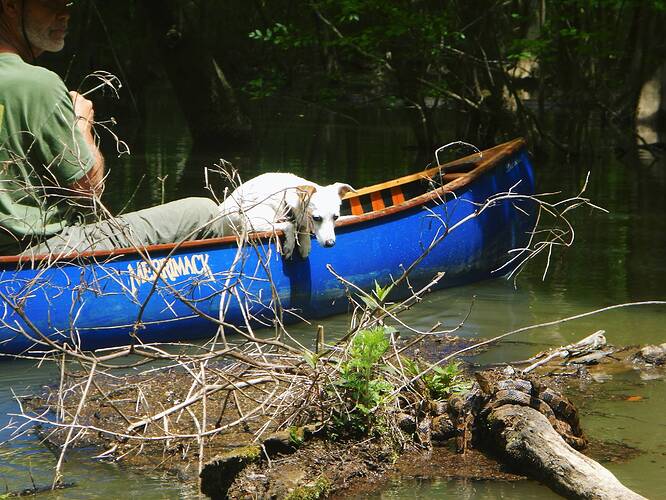 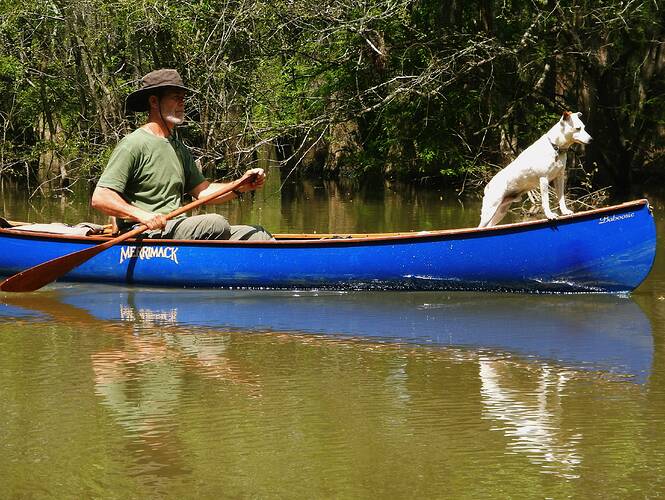 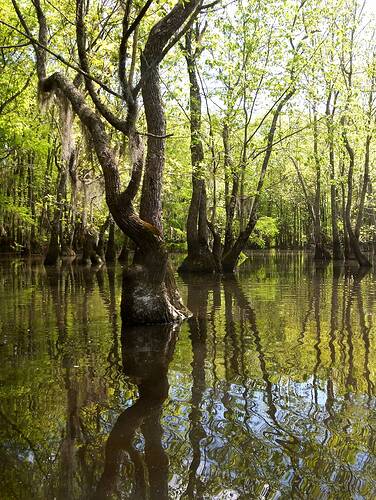 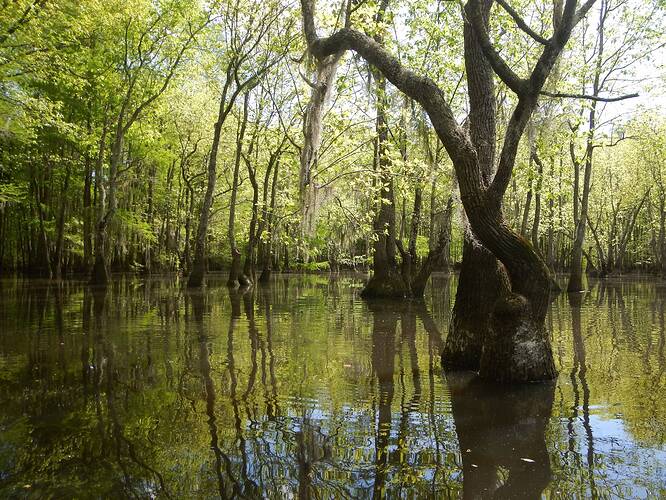 A few more warm days and the hoots will be from the Bubbas partying in the swamp.

@string said:
A few more warm days and the hoots will be from the Bubbas partying in the swamp.

A few more warm days and the hoots will be from the Bubbas partying in the swamp.

We picked Wednesday and Thursday for middle of the week fair weather days to lower the probability of that. Although a couple with their outboard roaring and music blaring showed up saw us and after waving headed out of sight at the far end of the lake and turned off the music. i heard the guy say this is one of the few places in the swamp where you can see the sunset. A matched pair of jon boats came roaring in about 5 minutes later and joined the couple. They left about 30 minutes after dark.

Sunset was behind us in camp but it was a cloudless sky so I doubt we missed much. I was up just before dawn and listened to the birds and frogs sing the morning in. We were better situated for the subtle blush of sunrise on the water. 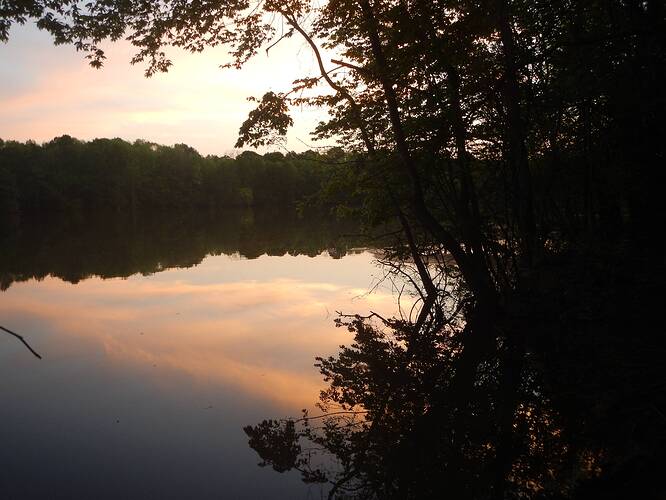 How do you know I don’t already publish under a pseudonym? One thing is for sure you can easily see I’m not very successful if I do!

In my younger years…………decades ago…………I might have been a bubba in those waters.

Did you weigh 350 and ride in a John boat with the radio blasting and a case of beer?

@string said:
Did you weigh 350 and ride in a John boat with the radio blasting and a case of beer?

Ok. Jon boat. We were maybe 350 pounds if you added both weights. Blasting perhaps, but not the radio. We’d fish some, shoot snakes, get beer and drink it in parking lot at the shopping center waiting for our wives to get off work.