Spray skirts for your recreational kayak

If you thought you couldn’t put a spray skirt on your rec boat. Think again.
Wilderness Systems makes skirts for their kayaks and Seals, apparently, makes skirts to fit most rec kayaks.
Seals Sprayskirts - Sizing (sealsskirts.com)
Seals also makes spray decks, which is what I like to use, unless it’s pouring down rain or very choppy.

A number of rec boats will accommodate a spray skirt, but those with very large cockpits the spray skirt will often implode if hit by a dumpling wave. Too much force for the large area. These spray skirts will do fine, however, to keep out the occasional wake or small wave in more benign conditions. They will also keep sun and rain off you.

Conditions where a spray skirt will fail are probably places such a rec boat should not be anyway.

Back when I first moved to California in the 90s, I wanted to get into mountain biking. I bought a Murray brand mountain bike, a brand available at Target. The marketing literature talked about how it was appropriate for use on trails and all of that. Lasted me a few months before I broke it to the point it couldn’t be repaired. Wasn’t even a crash that did it in.

Just because the company’s marketing says something can work doesn’t necessarily man it will work in real life. They play down the limitations.

Peter-CA, I staeted reading a long post you did on certification, but I lost it when SOT posted a video on rolling your rec kayak of a Pungo with a spray skirt, and I swallowed my tongue. Now I can’t find the heading. I saw someone do that with a 747 and a helicopter (not an AH-64 Apache).

If anyone thought a sprayskirt could not be placed on a rec boat l haven’t ever met them. Don’t know why this is a revelation.

The problem is two fold. One is whether it’ll handle dumping waves, as above as the spray skirt gets larger that gets less reliable.

The other one is cost. You could strictly speaking get a neo skirt made for a rec kayak. But most would find the cost too painful.

You did meet one. Me! Agree. Agree. Never heard of such a thing and almost swallowd my tongue. I knew a guy who could shoot skeet with near 100% precision using an stock 870 Remington pump shotgun from every conceivable position. Top of his head, behind back, upside down pulling trigger from little finger. But I would do it that way, at least not all the time . . . If I’m lyin I’m dying. One was US Secret Service FA Instructor and the other was US Army Marksmanship Training Unit. If you wanted to spin his prop, tell him that’s fancy trick shootnin - THERE’S NO SUCH THING AS TRICK SHOOTING. Excuse me. Looked trick to me. It was conditioned shooting. All I’m saying is that it’s the first time I saw somebody do conditioned rolling in a rec boat. Didn’t know a lawnmower could go 65 mph either, but it did. Don’t mean I’d drive it to work. I’d use it to tow my kayak. Saw a guy do that today on a video. On asphalt, 15 miles and he gave up. I’ve done more damage running into beaches. Saw a guy snow kayaking. Dared somebody to find it, but I knew he would because I seen it done. This was a good day. This is what t I learned in two weeks as a new member: You learn more when you lose an argument than you do when you win it. Think about that for a minute Canoesvwithduckheads. See if you can top that. He probably will. Just like to hear him talk purdy, but I’d like to see it in sonnet form.

The YouTube videos of the performances have aged out but there used to be several that showed Dubside (the American kayaking guru who has been a repeat champion at the annual Greenland skills competitions) rolling a puffy 12’ by 28" folding kayak and even a 2-man rubber raft.

And at the Michigan Greenland skills annual summer camp, attendees have a fun event where teams build skin on frame kayaks in 90 minutes with nothing but bundles of 1" by 2" by 8’ wood slats, rolls of duct tape, a kid’s hula hoop for a coaming and clear vinyl stretch wrap. Upon completion one member of each team paddles their 90 minute boat in a race and gets points for rolling it. (see photo below – all three paddlers the year this was taken executed successful full rolls with these ephemeral boats – my shot, as I was there).

Just because a highly skilled person can execute a crazy (and often gag) routine with their talent doesn’t invalidate the reality that the items they might use for that trick are not reasonably suitable for that sort of operation by the majority of people. 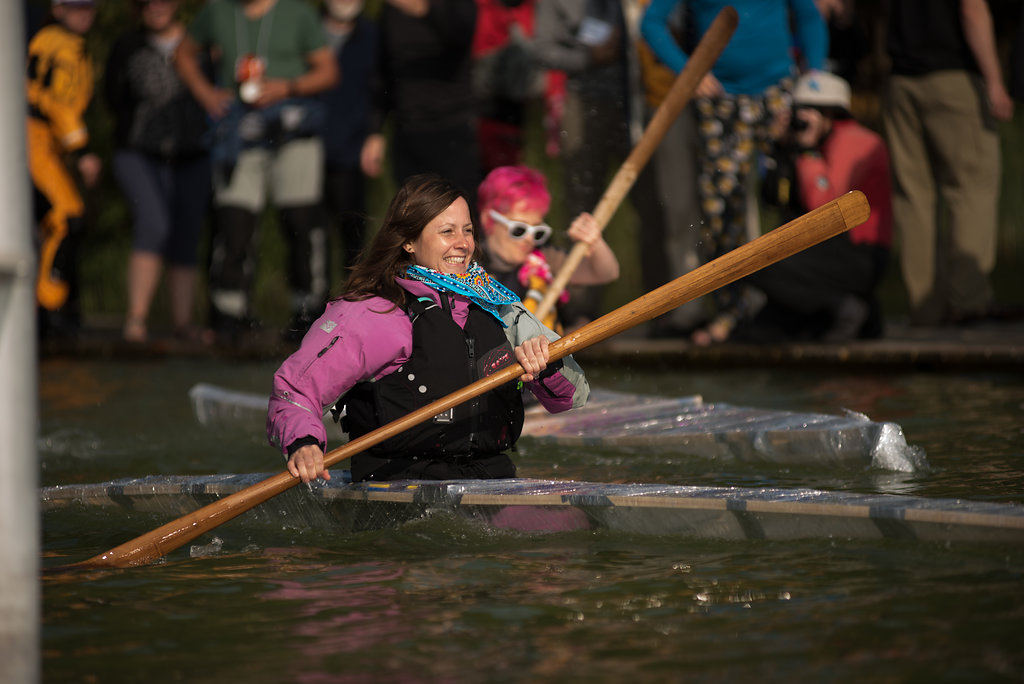 I’m trying to imagine how many strong helpers it would take to stretch a 57" by 22" neoprene deck over a Pungo sized coaming. Might make a hell of a trampoline once you got it on there. Not to mention the reach for the grab loop once you were upside down. Shudder…

I can’t recall any names but I know at one point someone who wanted to turn a Pungo into a sea kayak here did get an estimate for a neo skirt for one - custom. They got as far as understanding that a neo skirt had a better chance of holding, but like SOTConvert did not understand enough to make it to the part about having to pull it off. The price was absurd.

Happily so, since the darned thing would have had a chance of staying on rather than coming off with an easy push when the panicked paddler went upside down.

We have a race where people hollow out giant pumpkins and paddle them. Almost anything is possible I suppose. 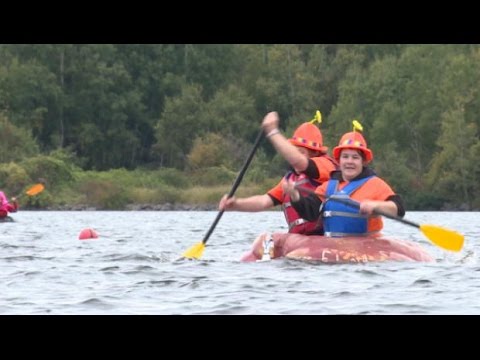 Like momma jyak used to tell me, you’re too smart for you’re own good, but Celia, you had to know somebody like me would join the site at some point. The last three posts show that some people have clear heads, and one person says it in such a way that’s short sweet and to the point. My only question is if the round ones work best, stem up or down, or do you use a tall one with rocker and cut along the long axis, should the upper have shear or tumble home.

People who are unaware of these basics do join the site. I have never met someone in person who had a rec boat and was not aware of at least a half skirt option. To keep sun off their legs or limit paddle splash. These are people who have actually been paddling their boats, on the water.

There is an archaic term for folks who are loudly convinced of their own superior expertise on any subject, despite there being little or no actual evidence of any such talent: cocksure. (and the allusion is fowl, not foul, by the way, so no bluenose pearls need be clutched.)

Back when I was a senior project manager on infrastructure construction projects the most tedious part of an otherwise interesting job was having to sit through hours of pontificating at daily and weekly job conferences when one or more of such boors populated the attendance roster. The aggression displays, empty vocalizations and chest thumping that often occurred would have horrified a baboon troupe. Myself and a very few other females were a tiny minority amongst the participant rabble and we developed a shorthand signal to share our exasperation at those time-sucking dominance displays: “Psst, did you get that WHAM memo?”. World’s Highest Authority Mansplaining. A sad and self-defeating affliction best endured with humor.

I think I have to invent and market a rec-kayak spray skirt adapter. A poly top that snaps over the most popular rec-kayaks coaming and then has a coaming to fit a smaller spray skirt. That way I could go out in my local ponds and sun my legs with my cooler between them while fishing and then when I want to have more fun snap it on go up to Lake Erie and play in the waves with a proper small spray skirt.

As long as I’m at it I will mold in a cup holder.

Adding a few more pounds of plastic is just what most rec boats need.

Might as well mold a large skeg into your contraption while you’re at it since “playing in the waves” with a rec boat hull could put you inverted pretty often. At least that would aid in returning the craft and its drowned contents back to shore. Add a snap in blank for the reduced cockpit and the insert could double as a surfboard.

If your pitch gets funding, maybe you could expand the product line to hard shell tops for golf carts so drivers could take them on interstate highways and racetracks.

(I get that you’re being tongue in cheek. At least I hope so.)

What happens when the person has to do a wet exit?

I had a Spray skirt on the pelican 100 I paddled in the surf. It was little help put did minimize the water in the boat until a wave hit it. It would implode as has been stated then I was on shore doing this. There is a drain hole at the stern. 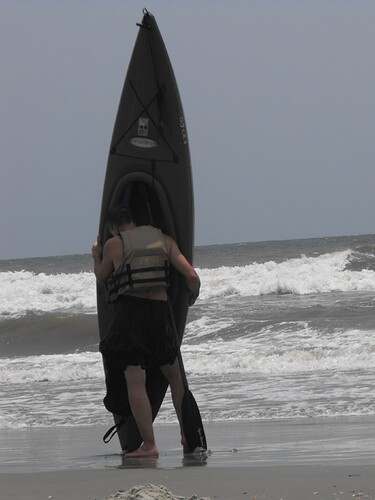 Instead of doin’ this. 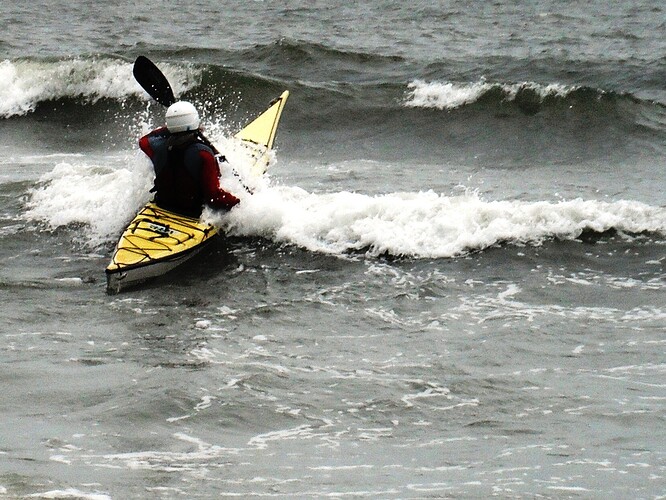 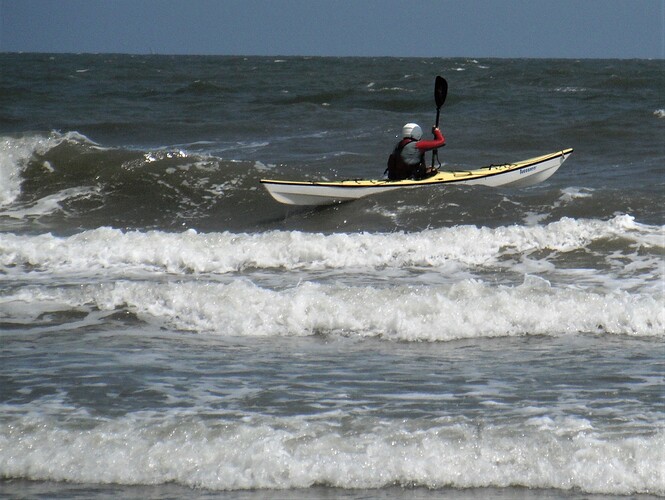 Can you imagine trying to pull such a monstrosity after a capsize? I think it would be correctly marketed as an underwater casket.

Been to Fla lately 90% of the retired folks drive fancy enclosed golf carts to stores in their gated golf communities. I have a friend that has Pa plates on a golf cart it is a thing of beauty. When I asked him what it was all about he said he bought it when Obama was in charge and there was a government perk for buying an EV and it paid for the whole thing all he had to do was send in some paperwork. Never say never. He heard about it when visiting relatives that had a free one in Fla.

You are right it is a silly idea. If I were to make one I would have it fit my canoe it is already to heavy. Then I can have it attached to outriggers and a sail mast and all the rest. I do see these around and I think they could have bought a little sail boat for half the money it cost to convert a canoe.

I had to smile going down French Creek the other day I came around a bend and there was this giant 16’ dia 4’ high blow up white circular water couch moving along about 1 MPH with two rec-kayaks following it nudging it on course. When I got to it was full of women having a good old time. I had no idea if there was a pile of PFDs on the floor but no one had one on and I didn’t see a launch permit on the side they told me they had covered the same 12 miles I had done. At the take out ramp they pulled the plug and let enough air out to stuff it on a big utility trailer and off they went. As surprised as I was I can picture people doing the same thing in Lake Erie.

As they say whatever floats your boat.