Am looking toward replacement of my 2006 Subaru Legacy wagon with more modern station wagon. At present the VW Jetta/Golf and Volvo wagons have the desired lower roof height and length and rackability to haul 2 sea kayaks on roof as well as trips to Lowes/HD. I am seeking first-hand experiences with these two from years 2012 forward as to reliability and known issues. Any other manufacturer suggestions appreciated to yield a solid wagon for daily hauling and kayak transport. To me the modern Subies are too tall with poor rack choices either factory or after market.

I’ll be watching this thread with interest, even though I won’t be buying in the very near term.

My wife and I settled on those two as the best choices for the same reasons. I will also note that the newer model Volvos are slowly going up in height, sigh.

We ended up going with a VW Alltrack Wagon, 2017 model year. It has worked just the way we hoped. The roof height is great for lifting kayaks into J Cradles. We got Yakima Hood Anchors for the front and rear tie down points. We think it is a very well designed car, though a bit spare on storage places in the front. But lots of nice features, for us at least. We have had it for almost a year at this point.

You don’t want my vote for a Subaru, but I’ll still put in my 2 cents worth. It appears that Subaru has solved the head gasket problem, so I went ahead and got a 2014 Forester which is the year the Foresters changed dramatically. Yes, it is taller … so we got a pair of hullavators. At nearly 78 years old I was moving in that direction anyway. The car came out earlier than usual (June 2013) and we’ve used it as our kayak hauler ever since. I have the under-the-hood anchors for the front tie downs and have a trailer hitch in the back for stern tie downs. My crossbars are Yakimas, inherited from our old 1999 Subaru. Both my wife and I prefer the slightly taller Subaru to lower versions anyway. I didn’t like the roof rack setup on the 2014 Outback.

I can’t say I like the roof rack, but I love the looks of the new Buick wagon! OK, I must be getting old.

I really find it hard to put my finger on the difference between a station wagon and a compact utility vehicle or a crossover.
Anyway, my wife’s Toyota Highlander has nice roof rails but with the method we’ve got to load the boats on the Silverado, we usually take the pick up truck for ease of loading and hauling gear.

Don’t mean to hijack but is there anything that comes with a naked roof? We might go with another Forester… We have had them for nearly 20 years and no head gasket problem … The first one got hail damaged at 180000 miles and the 2009 we have now has 140,000 miles even though at 4000 miles it suffered 9 grand of damage from hitting a bear in New Jersey
We lament the demise of the stick shift but have to accept that… The bare roof is still a quest

(Sort of what your SUBARU, logo and car, must have looked like. As for the Joisey bear? Well, he’s probably still running strong and in a panic, what with FatElmo in rut.)

Naked roofs are available on the base no frills version in most likely brands and models that paddlers may like.

The problem is that they likely will come with rails once you get the features most want - comfort features, safety stuff etc. Getting a car with the middle tier equipment and features and no roof rails - that is just likely to be on any lot.

Some rails may be easy enough to dismount. They were on our old Taurus and Sable wagons. Asking about that may be the best bet.

Dang. I just bought a new Crosstrek. I realize it’s a little tall but I could still get a manual transmission and roof rails. I hear Consumer Reports likes the new Impreza… a Crosstrek is just an Impreza on steroids.

I have a 2017 Outback. Get the Touring model and it comes with Thule rails. I have the standard rack and haul two 17 ft seakayaks without extra bow and stern lines, a kayak/canoe trailer and a big roof box not necessarily together . The rear rack can move back several inches. It’s in technique. Not available to some users.

@tjalmy said:
but with the method we’ve got to load the boats on the Silverado, we usually take the pick up truck for ease of loading and hauling gear.

What method? I greatly prefer loading boats on my 1999 Mercedes E320 4Matic wagon compared to loading on my pickup truck. My 2000 Silverado has a standard cab and unsecured bed with soft tonneau, so my secure storage for gear is practically non-existent and I can’t use my rack and the tonneau at the same time, so the bed is open when I have the racks mounted.

I may be getting a used topper for the truck tomorrow, so maybe my semi-secure gear storage will improve. Soft tonneau covers can be a beast to use in temperatures under 40 degrees F.

Edited to add that I almost always load boats by myself.

Volkswagens are nice when they are new but fall apart quickly. Terrible reliability. Look at the Acura TSX Wagon. Nice car and good Honda dependability.

(Sort of what your SUBARU, logo and car, must have looked like. As for the Joisey bear? Well, he’s probably still running strong and in a panic, what with FatElmo in rut.)

It was 35O lbs with four broken legs. still alove in foul mood and the Joisey State Trooper said he had to wait for Fish and Wildlife to come shoot it
Troopers are not supposed to. IMO thats a bunch of BS. Who wants to stand by angry bear in pain?
Kinnelon NJ 2009

not sure why the bear came running FROM a Jersey diner

My neighbor had a VW wagon in his driveway. It got replaced with the Impreza. VWs are in the shop for repairs way too much.

What about a Hyundai Elantra GT? At least they are guaranteed for 10 years, or 100,000 miles. That is the drive-train, but it’s bumper to bumper for 5 years.

I’ve been waiting for Citroen to get their C4 Cactus approved for the US market which they have been working on for a while. Rented one when I was in the UK last year and loved it. Price point in the UK now is around $20,000 to $24,000 in US dollars. Has a relatively low roof and the feel of a larger car in the interior and on the highway. Totally a blast to drive (even with the stickshift on the left!). 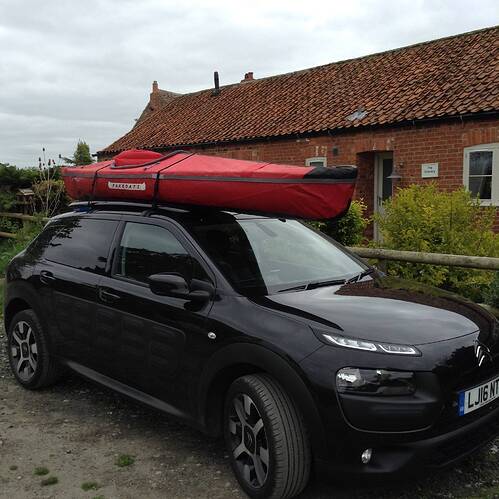 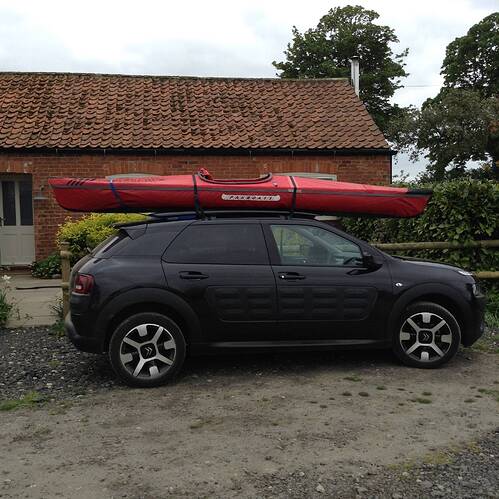 Kia Sorento.My son has had one several years and it is still going strong.

@willowleaf said:
I’ve been waiting for Citroen to get their C4 Cactus

Those are the most unique door panels I’ve ever seen. I think I’d prefer smooth though. I wonder if they fair better with shopping carts and other car doors?

What Magooch said… Hyundai Elantra. They quit making my wagon, the Elantra Touring, so maybe they offer the new GT with roof rails? Anyway, my ET was great with the 5 speed manual transmission. If I lived in the country where I could stash cars here and there I’d still have it.