Storm Blossoms on the Water

@castoff said:
A group of four of us kayaked camped on Lake Jocassee this past “first day” of summer and the weekend. Karl had knee surgery a while back and this would be his chance to put it to the test. Rusty would have too work late so would paddle out at dark. Lisa put the paddle on the water by emailing everyone the suggestion, and I wanted to play with my tenkara rod on the creek by camp. Fifty percent chance of thunderstorms each day of the weekend. Kevin joined us for the day with the dog deck he recently made for Sweet Boy. We noticed lots of rhododendron blossoms floating on the lake. It dawned on us that the stormy weather we have been having probably had something to do with so many, 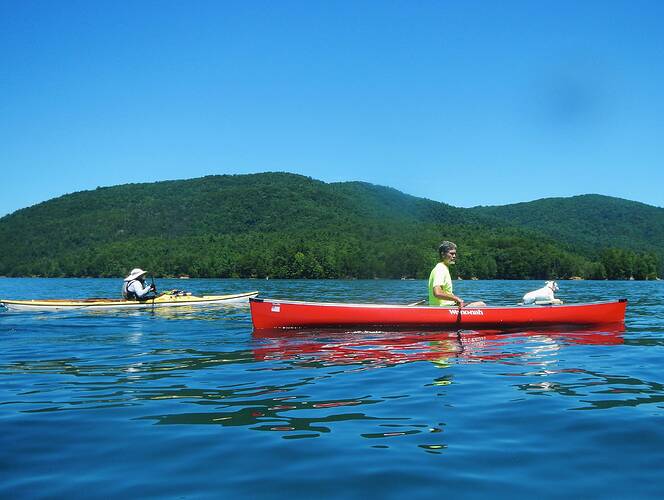 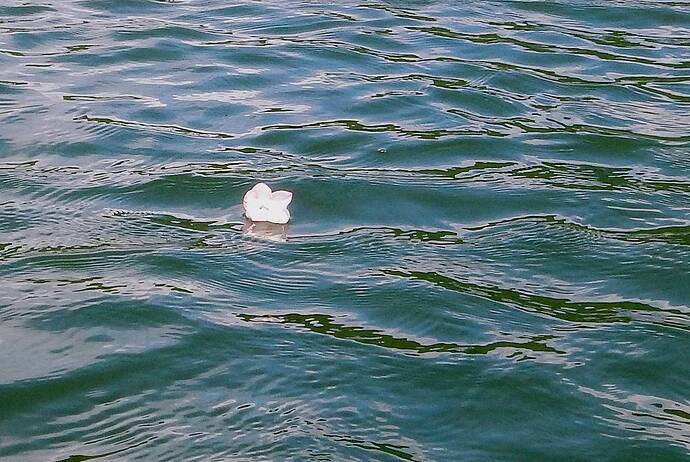 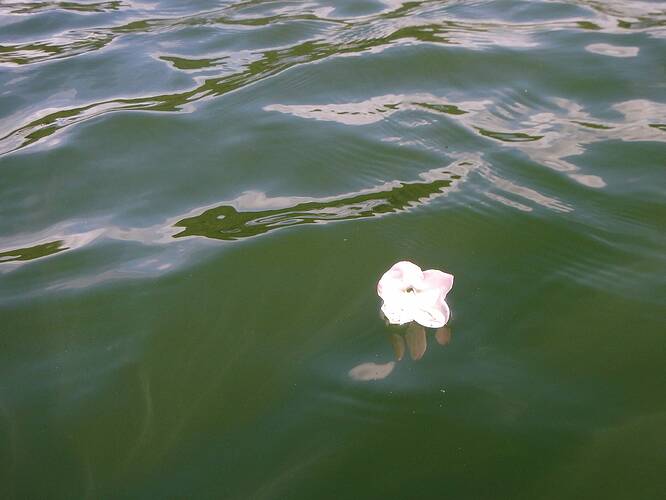 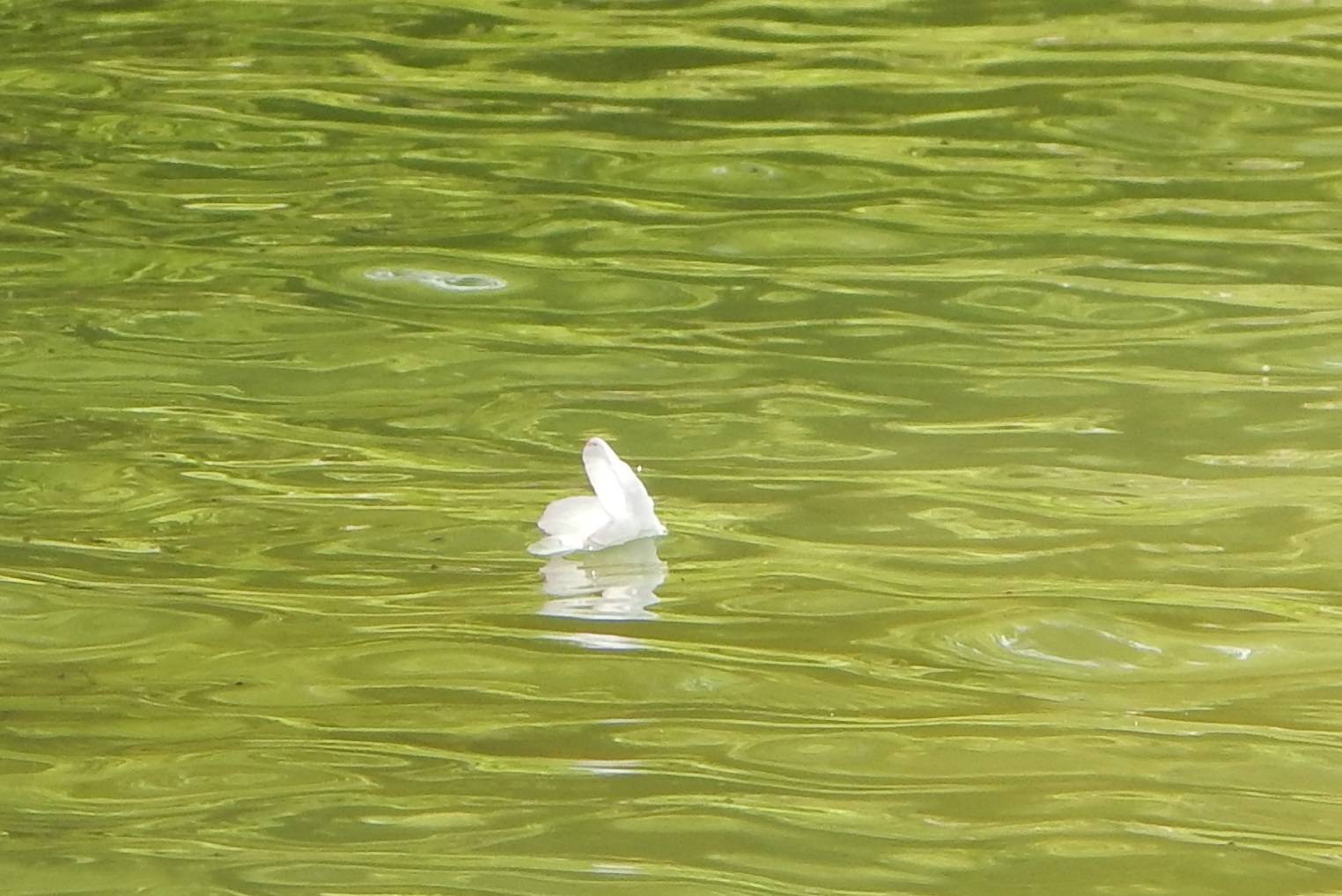 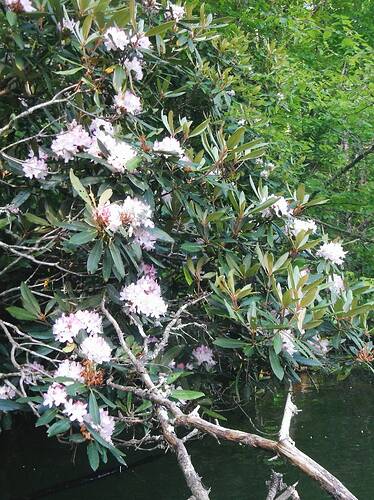 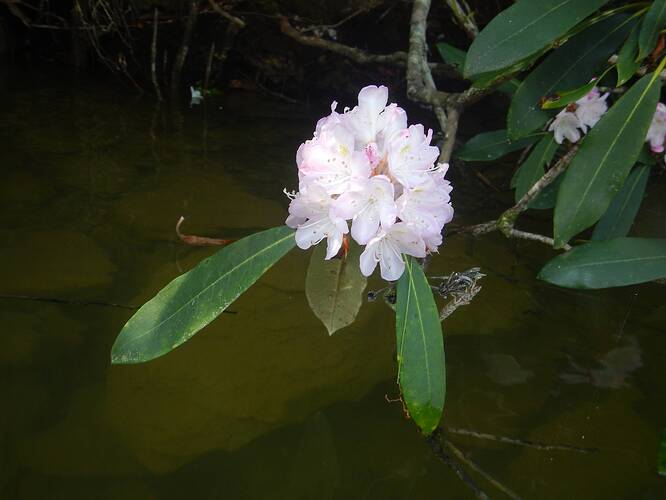 Strong winds, hard rain, and a little bit of lightening woke us about 1:00 AM the first night and again about 3:30. The next morning 2 of us hiked the creek and bushwhacked 2.6 miles to a place where 3 falls come together. One is well over a 100’ drop. Karl paddled the lake to make up for all his missed paddling, and I fished the stream. Only caught a small chub, but had 2 trout I didn’t land. It threaten to rain on us about 3 PM, but passed us by. Both nights we had a good fire. A group of Scouts had recently cleared fallen trees and built benches and brought in a metal fire ring with grill. They also built a bear proof food hanger so we don’t have to do our own anymore. Lisa found 3 poppers of jiffy pop popcorn that we popped and ate Saturday night around the campfire. 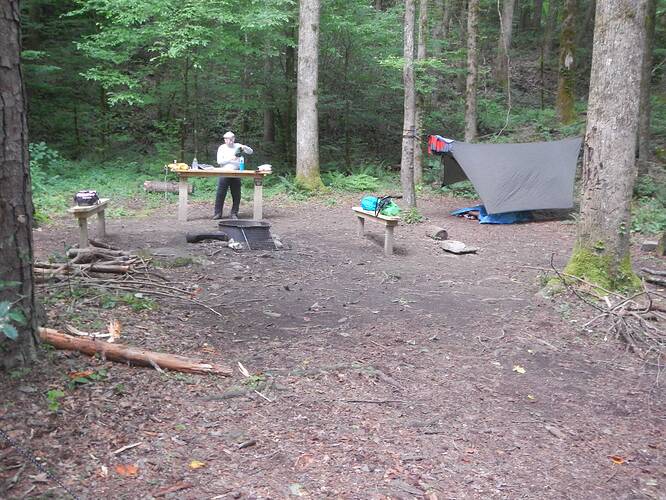 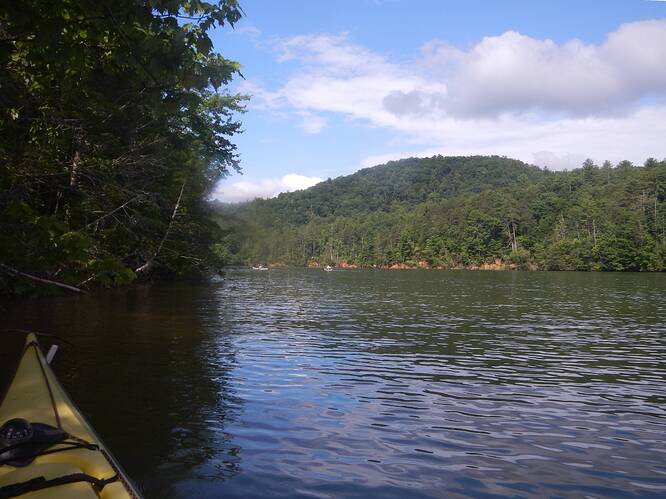 We headed home Sunday with the sun shining and lots of pedals on the water. At at a place we call Russian Cove. We were practicing rolling and a large Russian family came in on a pontoon boat. After watching us the grandfather brought his 4 year old granddaughter over because she wanted to try it out. She was wearing a PFD so I said put her on the front deck and he did. She was facing me and I said are your ready and she would nod. I would tip the deck toward her grandfather and she would fall in the water laughing. Then grand pa would put her back on, and we would do it again.

That’s how it got its name, but this time to cool off we ate in the water. Rusty used his PFD as a floating table. The rest of us sat in the water or used their kayak as a table. While eating I had a small pale blue butterfly checking out the bright yellow and red of my paddle float. The photo is one at rest on one of my spare paddles. I saw them in small groups but mostly as singles constantly flitting about in a hard to follow flight path. They are called Summer Azure and one of their host plant is sourwood. It is coming into bloom now, and is renowned for the honey bees make from it’s nectar. At one time I had about a dozen bee yards for sourwood honey in Oconee Co. Some on National Forest land and some on private property. 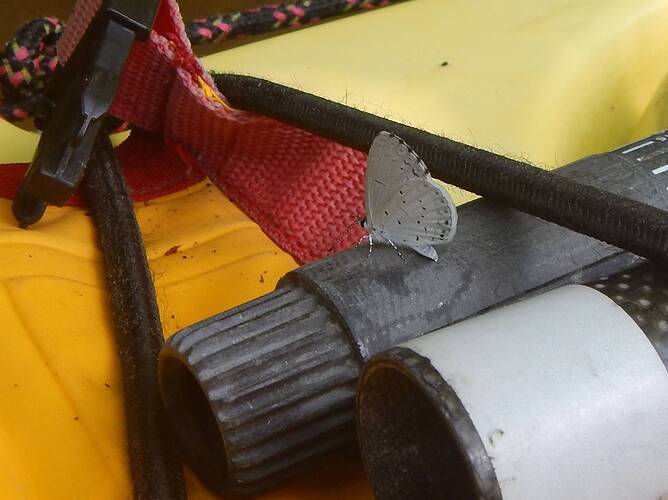 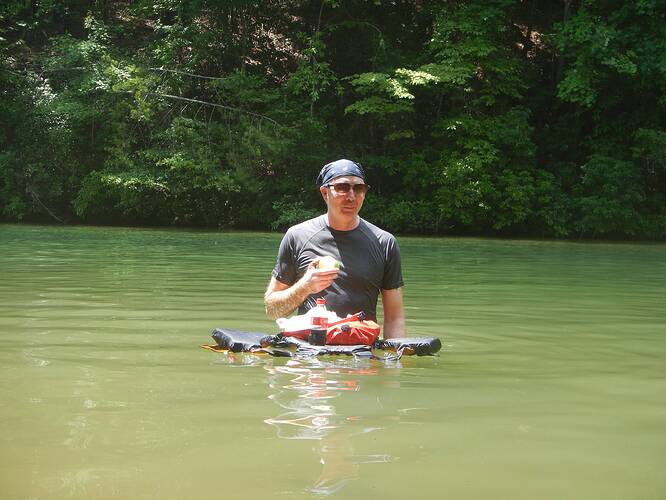 Lisa called Larry and gave him a time to pick her up at the ramp, and we were back on the water. We had been watching the dark clouds in the distance as we paddled the 4.2 miles to the ramp. We are about a mile and a half from the ramp when the storm pops over the ridge and the squall line of hard rain and wind can be seen coming our way. We are paddling in pairs, but Lisa and I would stop and take Photos so were about 100 yards behind Karl and Kevin when it hit. I took a compass heading to the ramp while I could still see. It was SW and we were on open lake when the visibility dropped to about 50’ at best. you could hear power boats still on the water, but none were close. The waves pitched up and we were being blown south which is the longest fetch of open water. It was thrilling and fun, but you had to keep a serious focus on what the water was doing. The bow of my camp laden kayak would occasionally spear the wave in front of me and not pop up until the water was over my cockpit. I love these kayaks capabilities on rough water. Lisa said lets just go with it which we did. The occasional flash and clap of thunder does take the fun out of it. As it passed on by the wind shifted to the E then NE and we landed were we might have taken out before the storm. Missed judge the timing by about 15-20 minutes. 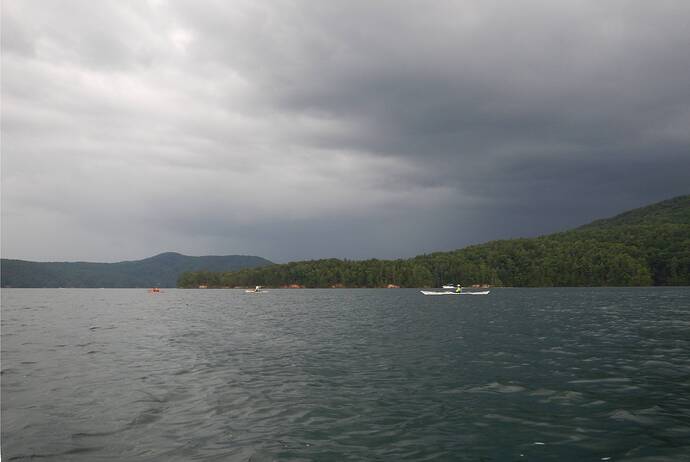 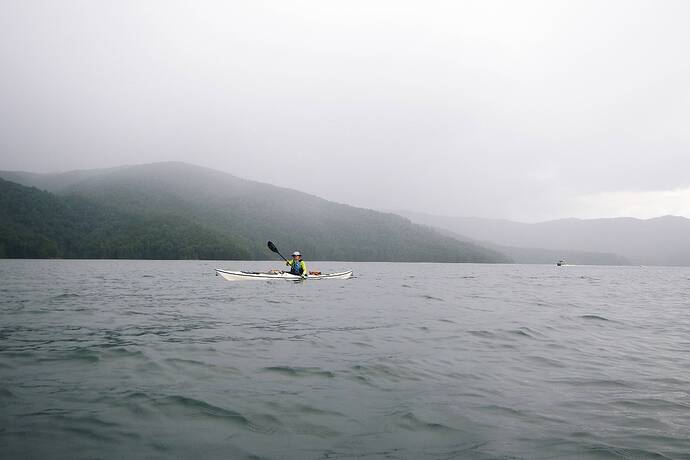 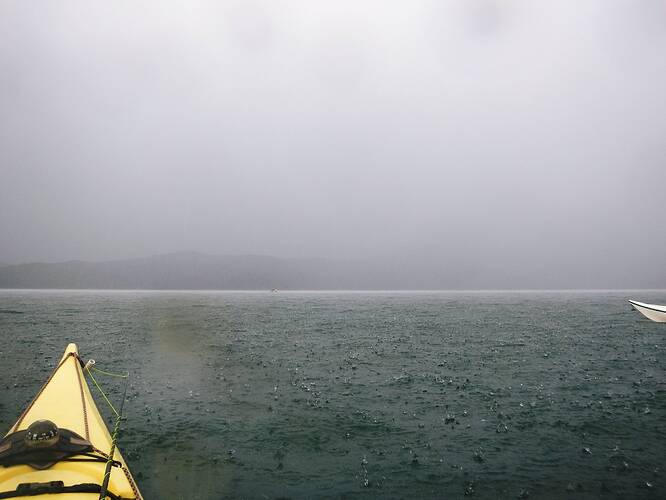 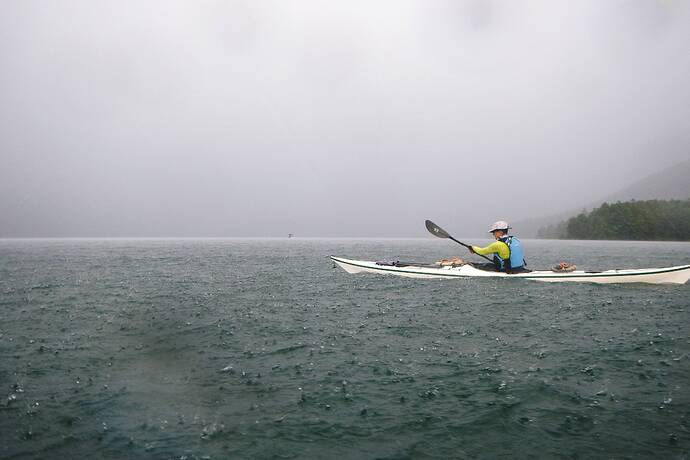 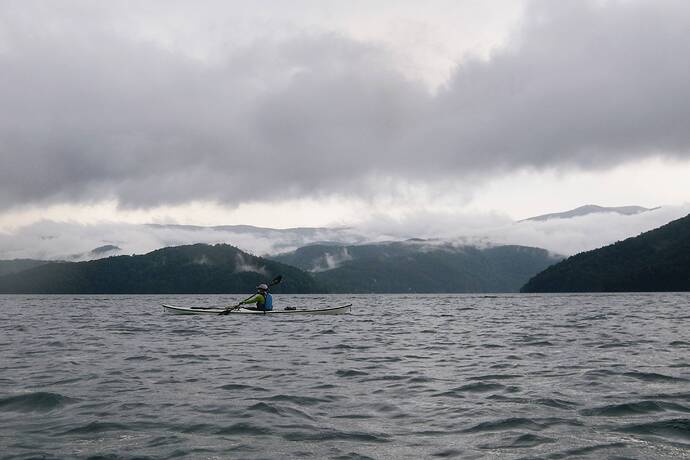 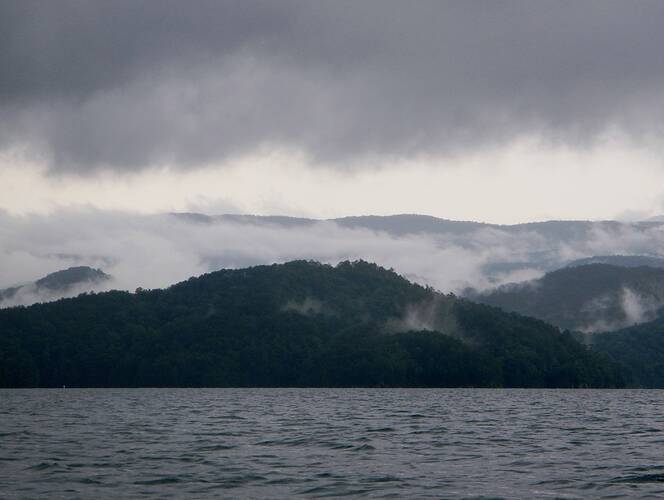 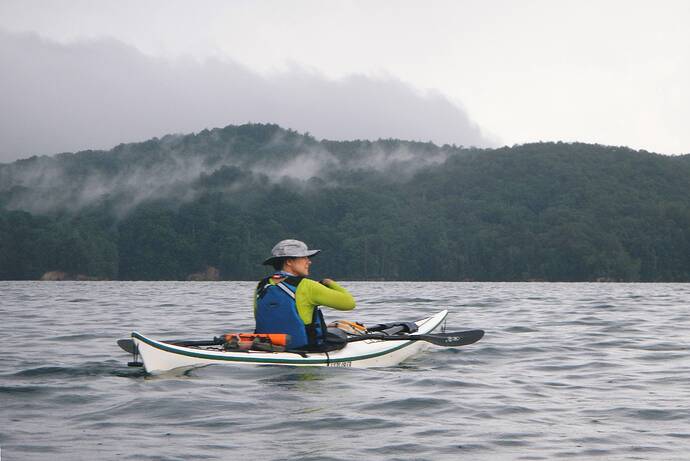 Worried about Karl and Rusty some as when Lisa called Larry they weren’t at the ramp either. Which really wasn’t surprising. It turns out that they were blown south too but stay that way and headed back to the ramp as the storm passed. We paddled back but had farther to go so got there a bit later than than Karl and Rusty. A memorable trip. I was paddling with a western red cedar GP that String made and gave to me. The last two times on lake Jocassee I have paddled in high winds and rough chop with this paddle. It serves me well Jim thank you!

De nada Amigo. Glad you are using and enjoying it.