I have a small waterfront home on the “quiet” east side of Orcas Island in the Washington State San Juan’s. Right at Doe Bay. This is a very small but very cool property that I have been working on for almost two years.

The shoreline that I own is a very rugged, rocky slope. Our cabin was built in 1995 and was (from all accounts) one of the very last homes built so close to the water on Orcas. You could never build this close again.

The tide swings here are huge. I am determined to be able to launch my kayaks (a NDK Romany Surf and a Dagger Stratos 14.5L) from these rocks though. So, I am in the process of building a strong, flexible, cheap, and above all lightweight kayak sled that I can shove down these rocks. This will be a trial and error process that will evolve over time.

There are lots of great places to launch a kayak on these islands, but I want the spur of the moment capability to do so from right in front of our cabin without having to secure the boat on the roof of our car and drive someplace.

Will update soon with some photos… 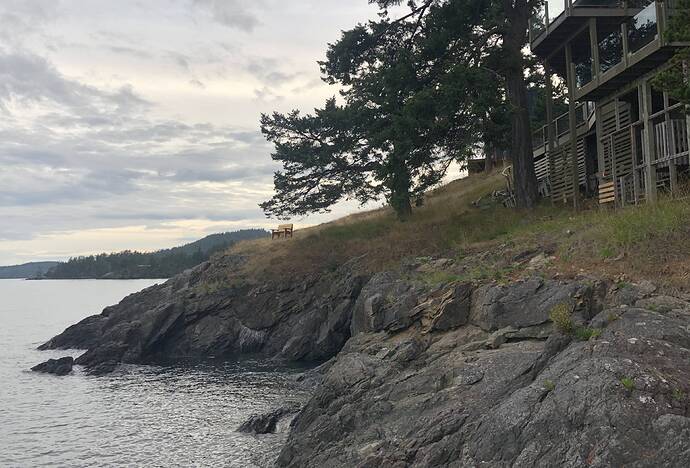 This is the rocky shore at near high tide looking back up to to the cabin. 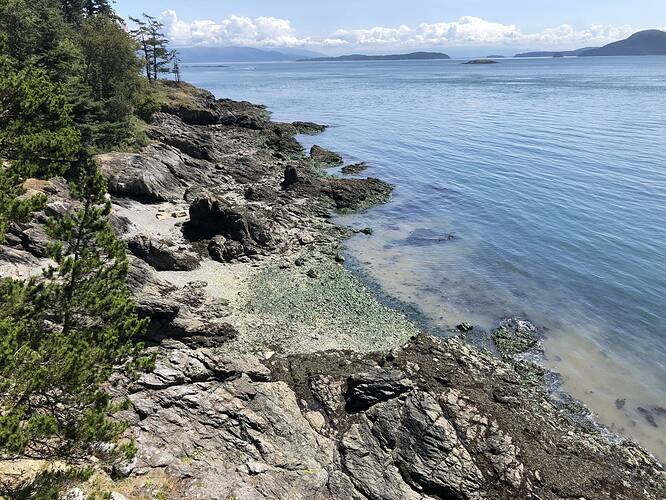 This is going to be a challenge…

(The center beach with the green grunge belongs to a neighbor, so my focus is the rocky shore in the lower part of this photo)…

My first thought would be a retractable ramp, but that might be too large to store in the retracted state.

Beautiful! Here on the Carolina coast it’s all docks and jetties and stairways.

I imagine the sled material needs to be affordable, obtainable, wetable, easy to work with and slick and tough enough to slide over rocks. HDPE comes to mind. How about finding a used port-a-potty side or wall? Or large wheeled trash bin? Or dumpster lid?

Better would be a slipway… There are many to still be found on the Maine coast. Which is rocks and 13-26 foot tides… You can then have a winch at the top to control the boats descent
https://en.wikipedia.org/wiki/Slipway#/media/File:Slip-Världens_ände-Ystad.jpg

I thought about making some kind of slipway that runs from the top down to the water? But the tide levels and the currents at any particular time would change the best launch point. The other thing is that there are strict county rules against building docks or anything along the coast edge really. Houses with a dock were usually built in the 70s, etc and are grandfathered. Getting a new dock permit takes an act of God almost.

So I have focussed on building a sled for the kayak itself. Just using a regular kayak cart with wheels would present a risk as some of the rock ledges are very uneven and a tip over would be likely.

Yesterday I started this puzzle using an exoskeleton of rigid plastic pipe with elbow connectors and thicker flexible irrigation tubing. The cost so far is cheap. It is also light and hopefully strong. And nothing permanent that would get noticed.

I will update with pics today…

Looks like you will become good at seal launches and landings: https://youtu.be/WD6au3vEHvU

I assume there are local laws preventing you from building any structure, like a dock?

The other challenge I have at the lower section at the fluctuating waters edge is the wet slippery eel grass and other plant life that gets exposed during tidal changes. It would be just a matter of time until I broke an ankle. So, what I came up with is this: I found (at a box store) these large thick 3x3’ perforated rubber mats that restaurants use in kitchens. They are super beefy and have little rubber “bristles” on the floor side to prevent slipping. I plan on joining three or four of these mats with heavy zip ties to make a flexible runway into the water for entering and exiting. This should help keep damage to the boat and my body to a minimum? 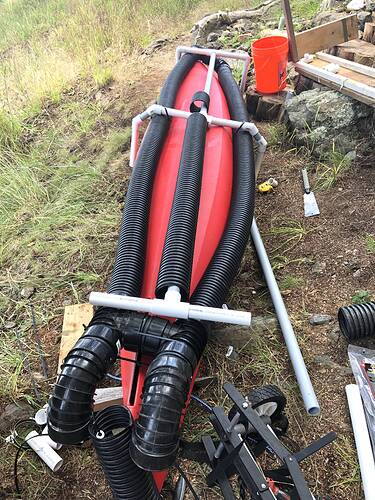 3024×4032 2.74 MB
After a couple of hours this is where I am at. I need a few more pipe connectors which I will have to get on the mainland. But I think this is going to work. I am making the end with the skeg box quite beefy. Thinking about running a smaller diameter pipe inside that cross white section pipe (in the front of the photo), figuring I could buy a cheap Craigslist kart just for the wheels. The pipe within a pipe will be come a working axle.

This will take some experimentation and revision I am sure. I hope the wheels do most of the work, but this sled should be good protection in bad roll overs on the rocks. I want to get it all dialed in with the poly Dagger before trying it with my Romany which is in great shape. The weight is great. It will easily be stored beneath the kayak rack I also made under the house…

I like your approach using simple items from big box DIY store. Good also to see your Japanese style pull saw as they really zing through stuff.

I have a couple of these saws. They are awesome…

Gorgeous location. If you want to impress your neighbors here’s another option.

It’s a difficult issue for sure - and would be nice to have a few solutions for differing situations.
Probably the first step is to have a kayak [or two!] that can take a little beating or is not too precious like a plastic boat. Maybe smaller rather than larger.
With that in mind, I’ve often thought that something like a 6’ [2m] long mat of chainlink fence [maybe plastic covered] might smooth out the bumps a bit and provide a surface that is less likely to damage a hull too much. A wider one might help the slippery areas if could be held in place if your shore is not exposed to weather and waves.
An alternative for killer shores might be a plastic cylinder that you push your kayak into and is rolled up rocks somewhat by lines at each end [ie it’s parallel to the shore] that allows the cylinder to roll up and down to a somewhat controllable degree.
Another idea is to do the same thing with a cylinder of any construction that is then pulled/slid up the rocks - if it is steep enough to slide back down that is!

For camping and reaching areas that are also difficult, the problem is even more severe, but some of the potential campsite locations are so exquisite that it’s worth considering how to get up to them. Pool noodles, small hpde mats, that fold-out paddlefloat by northwater, smaller yaks [conflicts with having to carry stuff, tho’], plastic yaks, or just beater yaks [while carrying a good repair kit] are possible solutions. It’s a great problem though and I’d like to hear more ideas.

[On sites that we’ve [BC Marine Trails] had more permission to intervene on, we’ve spent days moving heavy rock to make 6’ [2m] wide ‘boat runs’ in order to provide at least a semblance of small boat access. In well exposed sites, some maintenance work is required every year or so - it’s amazing how even large rock is shifted over a relatively shore period of time.]
-mick

I made more progress: made some cuts to each pipe for a better fit. I used outdoor screws through all the couplers instead of using pipe glue in case I want to refine the measurements again. I also adding more “ribs” cross sections. I can get more of the large flex tubing here but I need to be back on the mainland for more coupler joints. I have extra Thule straps to synch the boat into this sled. Like anything it will take some practice before I am comfortable using this thing on my own.

I have dragged both of my boats onto rocky shores with some minor scratches as a result. That is to be expected. But repeatedly dragging any boat down our rocks without some sort of protection on the way down and the way up (probably more hazardous?) is just going to ruin them in short order.

I do plan on taking my boats (via the car) to other put in spots throughout the San Juan’s, just for a change of scene. But I really hope this sled will give me a spontaneous “I wanna paddle now” option… 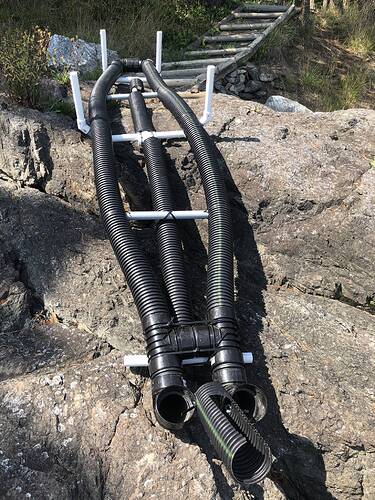 Quick test without the boat…

PhotoMax- I think your easiest way to get the kayaks over the rocks would be by using a section of an aluminum extension. It could be pinned to the rock with rebars and U-Bolt the rebars to the ladder. 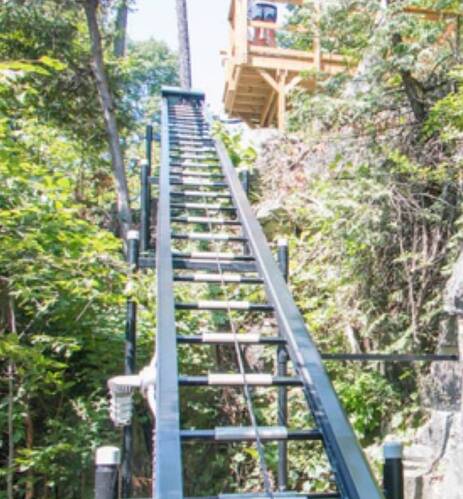 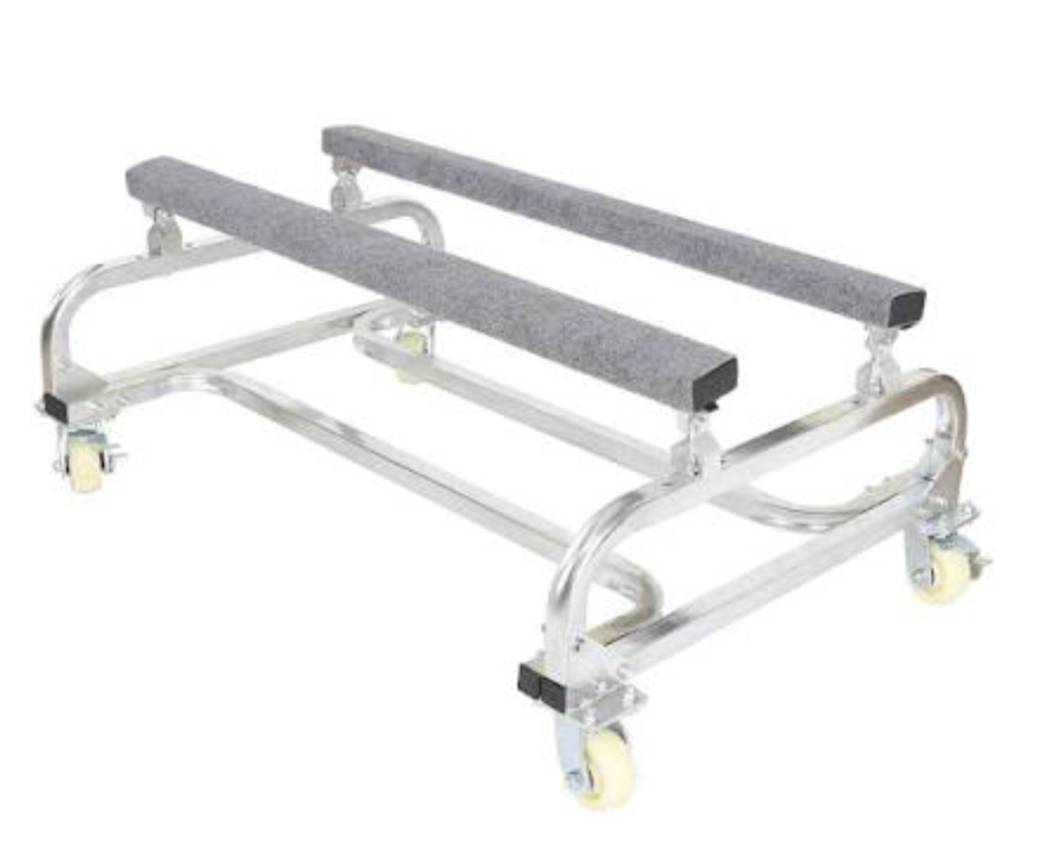 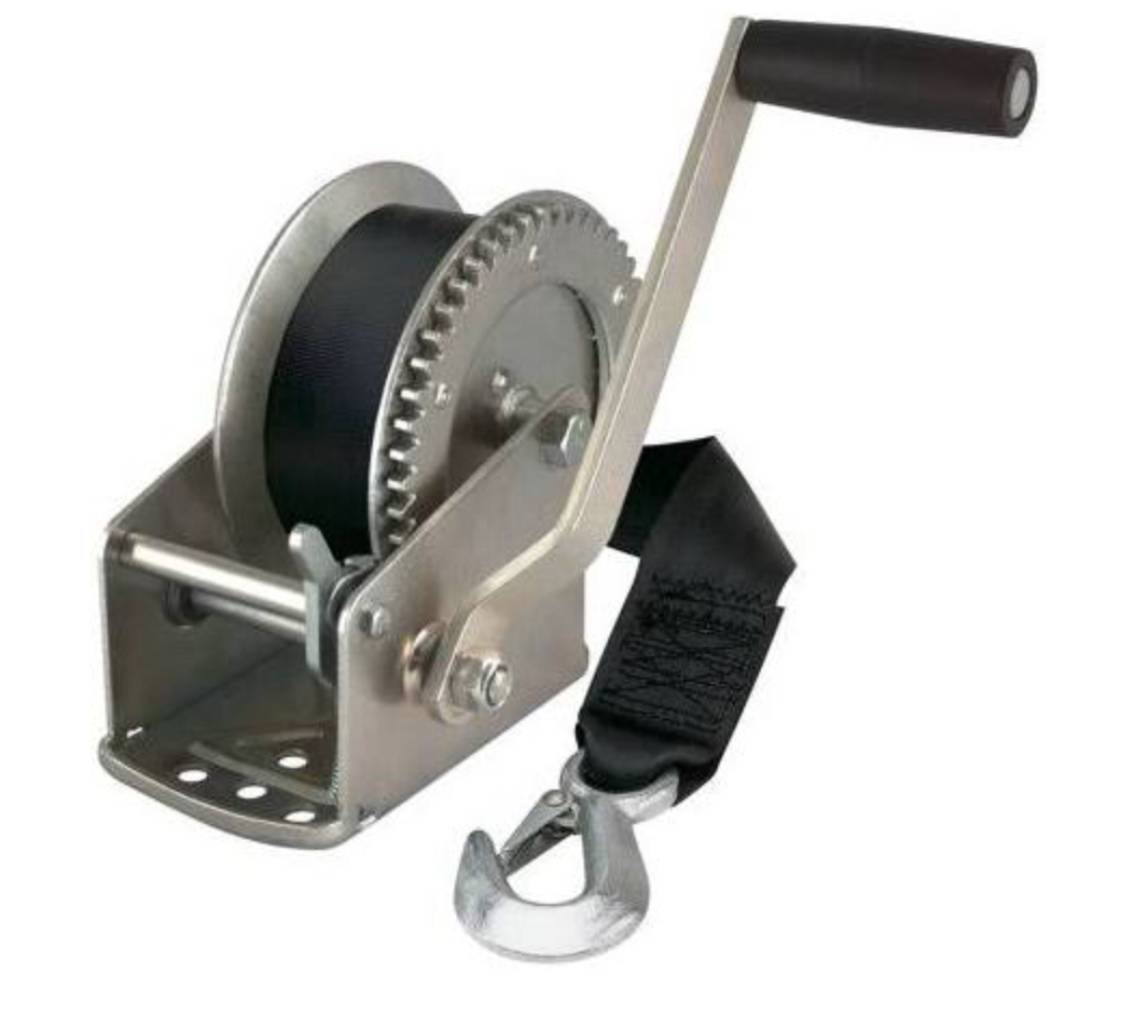