I don’t keep my Hullavator “moose antlers” on all the time. I even take them off at the boat launch to prevent theft. It’s always been pretty easy. But last week I couldn’t get one of them off. So we just left it on, finished the camping trip and now that I’m home, I still can’t get it off!

The little bent clip “thingee” is stuck. It also makes a horrible clicking sound when I raise and lower the arm. See https://youtu.be/pqFbuGIGOOk

I also have a really hard time just rotating it. See https://youtu.be/z802VSvGI5w

And when I look inside the horizontal bar I can see where the thingee is creating a gouge! 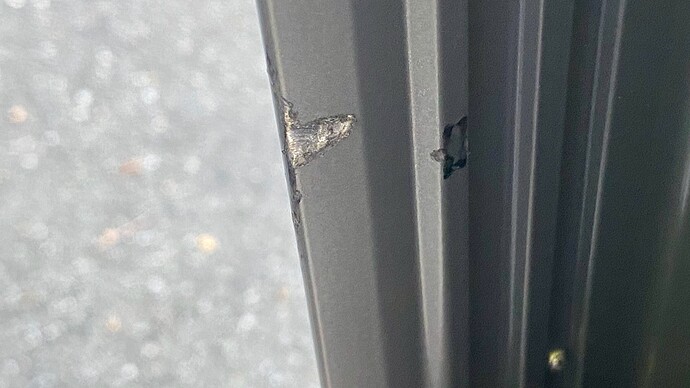 So clearly the gouge is caused by the thingee hitting and making that nasty clicking sound. I have no idea why though and more importantly, I have no idea how to remove it from my Subaru!

Any help is appreciated. Thanks!

They do bend. I suspect the pin is in the bracket through some holes that are binding up. The bracket below will bend. I had to get the pins out with pliers or tapping with light hammer.

To free it up and align up the holes I reemed out the holes with a drill.

The thingee that’s creating the gouge is the head of the tube rivet that is the pivot of the linkage arms. Each joint has a wee bit of play to it so there can be some side to side play in the entire assembly. This is amplified when the two independent arms are holding a spindle shape aka kayak. Here’s how I wish every problem could be addressed: if you wish to minimize the gouging take a ball peen Hammer and lightly peen the head of the tube rivet lip over time present a more rounded profile.

Yikes! I just watched video two! Don’t do that! Do not try to extract that pin with the Hullavator at extension! The mousetrap is loaded!

As to the pivot pin aka thingee #2 - with the Hullavator arm assembly tilted up to a near 90 degree angle from stowed flip the hooked part of the pin upward with your left hand then grasp the pin with your right and wiggle back and forth to withdraw it. When reinstalling the flanges of the arm assembly won’t line up precisely with the holes in the bar mounts assembly. This is purposeful. This is why the pivot pin has a pointed end to thread the far side hole.

Ok, time for me to submit my tech assistance time to Thule.

I can barely move it, much less wiggle it. I use the wiggle on the un-stuck ones. I was thinking of a light tap with a hammer but wanted to check in first.

And no, I would not do it with the unit open, that was just for the video so you could see how stuck it was. It’s hard to guess what would be hurt more if I removed when open, my face or my car!

I’ll give it a try after work today. Thanks!

I’ve had two sets of Hullavators on my SUV for over 7 years, and I remove and replace them frequently (but not at the boat launch!) yet I’ve never run into this issue.

Here’s what I’d do. With the arm in the normal horizontal position, pull the straight safety pin out, then grab the handle, unlock it and lift the handle (and arm) a few inches then put the safety pin back in. Now when you tilt the arm 90 degrees the pivot pin is very easy to get at… 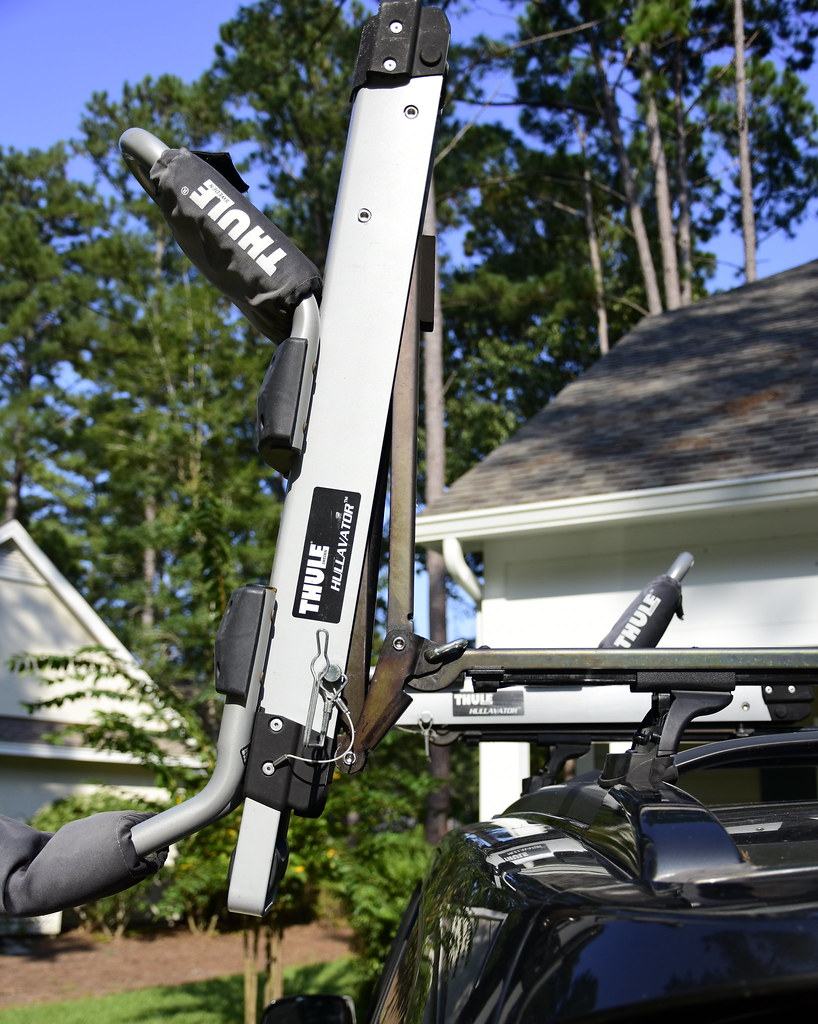 I’d apply some penetrating oil, let it soak in then I’d use a drift punch and gently tap that pin out.

I service my Hullavators a couple of times a year lubricating all pivot points. And I always smear a coating of grease on those bent pins. If the bent pin is misshapen or corroded you can get a new one from Thule (part no. 8535869) for $5.50.

I have newer generation without the safety pin but I can still bring it close to vertical. Access wasn’t the issue though, the pivot pin, aka thingee, was good and stuck. Using a hammer and a punch freed the pin, but it put up a small fight. So then I tried to see why. I tried other pins and they all stuck. Check out this video.

so then I remembered that just drilling the holes bigger might be all I need. Nope, second video.

I’m starting to think that that flat piece that the hullavator itself fits into has bent or something.

When I looked at the first video, stopping it when you had the pin almost through, it looks like the metal is slightly bent inward underneath the hole. Hard to tell.

I have the 897Xt, same as kfbrady, and also remove and reinstall mine at home. I had Thule locks installed so all I have to do at a launch area is lock the arms.

Hope you solve the mystery.

Thule has a lifetime warranty for the original owner on its Hullavator. Unless you have found a simple fix, before I went too far with other attempted fixes I would contact Thule’s warranty department. Thule’s customer service is pretty good and you don’t want to void that warranty. I have a friend that had problems with his Hullavator and Thule sent him a free replacement.

I submitted my warranty request 8 days ago. Nothing. And the youtube video I made for them still has 0 views. Sigh…

The best Thule phone number with tools for skipping the wait on hold, the current wait time, tools for scheduling a time to talk with a Thule rep, reminders when the call center opens, tips and shortcuts from other Thule customers who called this...

LOL, 2 emails just arrived from Thule, dated yesterday morning, but they arrived today. At least someone is looking at it now. It was almost as if they were reading paddling.com!

So I gave up on waiting to hear back from them so I went to gethuman.com to find their phone number. I called, waited less than 5 minutes. The rep found my warranty claim and instantly said something like “yeah, we had a bad batch, we’ll send you a new pair of brackets.” I pointed out I only needed 1 but he thanked me for trying to save them money and said they had to send to. I had another email within a few hours saying the part had shipped. It arrived in a few days and I replaced the bad bracket yesterday. All is good.

I’m glad they sent two because we had another one fail. My guess is that the bad batch must have soft metal or something and it deforms over time. I thought I had a third one go bad last week but it came off effortlessly the next time, so it was probably at a weird angle and I was tired…

Glad to hear it was resolved and Thule stood behind their product. I have the older model, which has the nifty pocket where excess strap is stored. Looks like that’s missing on the newer Pro model. I wonder why Thule dropped that function.

I have the new one and the pocket is still there.

That’s good to know. When I looked at them online, it didn’t show up.

I just installed my new Hullavator and am having the same problem with the pins getting stuck…I can’t get your videos to play.

Oh man, I’m sorry. I took the videos down. It never occurred to me that they might be useful to others. You can post your videos here and we can help, or just call Thule at the number above.

FWIW, I have found that it is useful to keep some lubricant around to periodically hit the H-pins. They acquire a kind of black stuff that doesn’t help with their moving freely.

The other thing is that you need to be able to balance the cradle so that it is sitting a little proud to be able to get the pins in and out. Otherwise there is a bit of pressure there. I kinda rest the bottom of the cradle on my shoulder to get them in and out to make that space. The other thing is that I often find myself putting the pins back in one side at a time, makes it easier to line up.

(On the pocket, if it is there I am apparently not using it. Though I could wrap the strap around the cradle rather than remove it. But I usually double strap anyway so easiest to take both the straps off to store them.)