Stuck in the lake 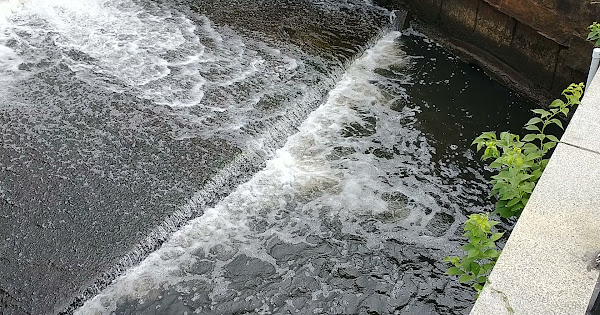 Awfully hard to paddle in that stuff.

Looks like they are pulling up plants. Invasive species cleanup volunteers?

Yes NYS D.E.C. they were pulling up Chestnut

water plants. Few volunteers mostly state workers. They measure in pounds figuring an average of 35 lb per bag. Some people in waders also pulling Chestnut up.

DEC guy said they have a grant for a machine to pull it up soon. I forget how many tons they said they have pulled up in that lake and the upper lakes. I think he said 2 tons from an upper pond.

. It has barbs on it that can survive for 7 years. What a mess it
made of Mill Pond in Seafood NY. Man in charge said he lives near by and remembered the lake when it was clear if vegetation. Some of the plants are natural ones.

They would have been a lot more effective if they used canoes. I’m surprised that DEC didn’t require PFDs be worn. I assume they had them in the boats somewhere, in accordance with state law.

I would hope so. I think it’s fairly shallow possibly to the point of standing in it. Some were in waders but nearer to shore.

Man, I know that one looks pretty benign but as a matter of habit I don’t go anywhere near low head damns, especially without a PFD. Those things can be absolutely deadly.

Even with a PFD, low head dams can be deadly. There are a number of horrifying YouTube videos.