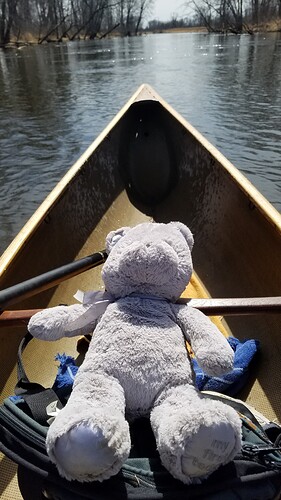 Amazing how compelling it is to see a teddy bear lying on it’s back among a tangle of sticks and roots on the riverbank. I had to pull my canoe up onto some tree roots using branches so I could barely reach it with a paddle. Doing stupid stuff to rescue a teddy bear. Now I feel like I need to see if a local TV station can help find the owner. 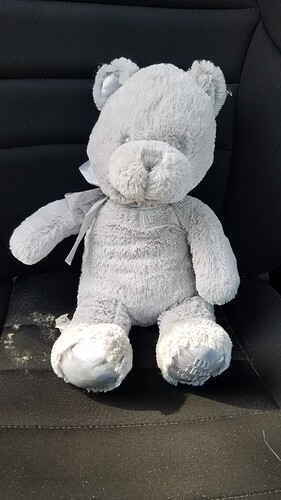 Looks white; is it a polar bear? I heard they are moving south. When some get to Antarctica they will be bipolar.

Stuff you find - I would also want to find an owner, especially given the good shape it is in.

I have wondered about the story that goes with some stuff I have found. Once I towed in a rather uncooperative piece of wood that was pretty certainly a chunk from a spar, some years ago in Maine. When I paddled up to it, I saw it had a couple of names and something like Love to Dad written on it. It had been written with something quite indelible, had been in the water a while.

I had the thought it could be a remnant of a tragic event. I deposited it on the beach, asked the owners of where I rent if there had been any bad incidents over the last several months, dug thru old stories on the internet. Nada, the tide took it away the next day and having found nothing I was disposed to let that happen. Especially given the way the larger Gulf Stream flows, I was probably being a little silly.

But I still wonder sometimes.

Yeah, we’ve found some wild stuff along our paddles as well 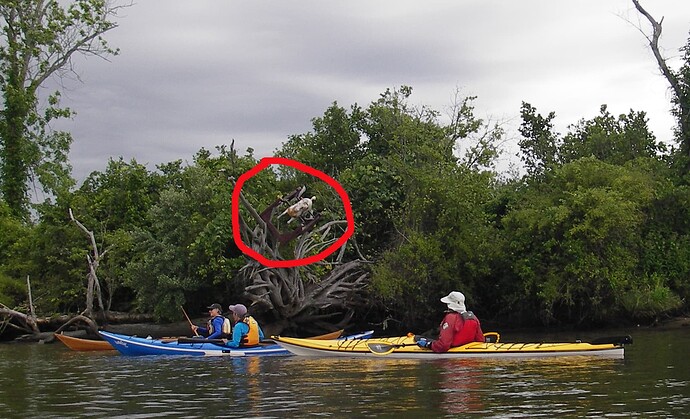 Great find, Tom! Good idea to contact your local media outlet as that bear looks like it’s missing its companion.

looks like a childs rocking horse… the kind with springs.

But first the important questions:

Was he wearing a pfd?
What about a dry (or wet) suit?

If not, I guess he only has air in his head.

I just saw a video yesterday posted by some power boat fishermen in the ocean. They saw in the distance what looked like seals in the water. They came closer and found two teen aged girls that had been taken out to sea by a strong riptide.

They were in rough shape but survived. The water temp was 53 degrees.
Wear a PFD and dress for immersion.

There’s a self propelled lawnmower on the North Canadian River bank by Highway 4. Further down is a backyard kiddy pool.