SUP Accident at Weir in Wales?

Does anyone actually know what happened here four fatalities. One man apparently died when he tried to help others caught in the impoundment. Not sure if this was a hydraulic feature or a real weir. One article mentions a weir, which I am assuming is an eel weir, an impoundment to trap eels. These are incredibly dangerous to paddlers who don’t know what is going on. There have been several deaths on the Deleware river at an old eel weir near Scudder Falls.

Dyfed-Powys Police confirmed 41-year-old Andrea Powell, who had been in hospital since the incident, has died

Jeeze… mass casuality on an inland paddle. Big miscalculation in there somewhere.

Perhaps the biggest SUP accident in the world unfolded in Wales on Oct. 30 when four standup paddleboarders died on the flooded Cleddau River in Haverfordwest. According to local reports, a group of nine people from different areas across South Wales...

Hard to gather what occurred here with given info. Although “low head dam” jumped off the screen at me

I read that the water volume was high and that after they entered the water, the weir failed (water being held by the weir poured over it), sending a bigger torrent of water into the area they were paddling in.

Language in the second article suggests that the water volume changed appreciably after they were on the water, which made the weir far more dangerous. Whether that was about the weir itself changing or their being unable to get off the river to go around it, can’t tell.

This is an established paddling group, so I am scratching my head about the note that the water condition changed on them. Was the weir failure a likely possibility given recent rainfall or was there an unexpected failure? No way to tell. In any case the low head dam was extremely dangerous.

It sounds like the authorities jumped quickly to find someone to charge and may be stepping back now to look a little deeper. It is tragic whatever unfolds next.

One article indicated she is thought to be the organizer, but who knows… Reporters often get these things wrong.

What a horrible tragedy. It’s also a reminder that no one should venture into the water with a group without researching conditions oneself.

This is a major reason why I stopped moderating the (defunct) “NE Surf Kayakers” site, sharing forecasts and stating a “session” (surf get together) for a particular break. Although always stating folks were responsible for themselves, especially when conditions were more challenging, I could not stop people from assuming that I was somehow organizing/leading a surf session/trip.

At one posted near-winter surf session, a total surf newbie showed up and asked for me with some of the surf paddlers. So, he gets directed to me, where he stated he was new to surf kayaking and wondered if he could get pointers. I told him that the conditions were too difficult for a first timer (waves too big and water too cold). Anyway, I went off to surf. Not soon after, a upside boat was shooting towards shore on the breaking waves, and the newbie swimming in the break zone. I and another more experienced surf paddler took turns towing and guiding the newbie back to shore. I asked him what the heck was he thinking. He said it looked like fun and he thought he could handle it. So he launched even though I had told him not to.

It was not lost on me the possible legal jeopardy. I became increasingly selective about what the given conditons were and who I was willing to go out with. Overwhelming these days, I pretty much surf paddle alone. Most of the folks that I trusted (just a handful) aren’t around anymore, either locally or in the sport.

It’s unfortunate to have to, but you were wise to stop that. Even if all participants completely understand and accept the risks and sign legal waivers, there is nothing stopping their loved ones from suing if the worst happens. People are often irrational in their grief. Or just litigious as a matter of course.

Unfortunately you are right with your fear. Once there is an issue, the lawyers will list everyone remotely involved in a lawsuit. Then they narrow down to the parties with deep pockets regardless of if there is any responsibility. Being dirt poor is the only way to not get sued.

If the noob in your example had drowned or got injured, there is a chance you and any bystanders that didn’t forcefully prevent him from going out would have been part of a suit. Probably even the Uber driver who drove him to the beach, or the guy who sold him the boat

It is things like that that ruin it for everyone. That’s why we can’t have nice things…

Or… just contact your insurance agent and get a multi-million dollar umbrella policy. It was actually pretty cheap.

I’m guessing more information will be revealed about this eventually. If they arrested the organizer for manslaughter then it seems like she knew about the dangerous conditions and encouraged everyone to go out anyway. Lawsuits are sometimes irrational but manslaughter accusations generally aren’t, unless the Welsh criteria for manslaughter are a lot different from in the US.

The guy who died while trying to rescue 2 of the others was an experienced paddleboarder who had just completed a 24-hour paddleboard marathon the week before.

I think laws in the UK concerning safety and vendor responsibility are much more stringent in the UK than in the US. I do know you have to jump through a lot of hoops if you want to rent a kayak in UK, showing BCU certifications etc. I don’t have BCU credentials and only rented a kayak after I showed the shop phone videos of me surfing and was asked to demonstrate a roll before taking the boat out.

I think it’s very common to assume that SUP paddlers are very experienced because they have done races or group distance paddles like marathons. A lot of these events are held on very flat water and don’t involve handling rough water, whitewater conditions or surf, breaking wind waves etc. Someone may have only paddled flat water for a year or two and will able to complete distance events on flat water and have no idea about moving water hazards. A few years ago some “experienced” paddle boarders were paddling on a lagoon here in Carlsbad, during a strong ebb tide which violently drains the lagoon. There are floating can buoys stretched on a cable across part of the entrance to the lagoon and the paddlers were swept into the buoys and underneath them with the current. One woman drowned after getting entangled. The “experienced” group had no concept of tides, moving water, and strainer hazards on the water.

Good point, I competed in the Devizes to Westminster race a few years ago and was intrigued by the “club affiliation” aspect of most UK paddlers, credentials are very important there

Not an “eel weir”. I’ve paddled small rivers in the UK (with one of the local small town paddling clubs) and the British tend to use what they call “weirs”, which are gradual ramps that control control drops in river level to eliminate rapids, rather than the more dangerous low head dams.

The low angle of a weir doesn’t create the dangerous circulating death rapid that is found at the base of a vertical dam, And the ones located on the recreationally popular rivers in the UK often even have a slot carved into the centerof the concrete ramp that creates a tongue that a kayaker or canoeist can slide down safely at average flow levels so they need not portage. At moderate to low flow you can even walk up or down the weir which I did on one trip because I was using a folding Pakboat which would have hung up trying to slide down the weir slot.

I paddled over a couple on the Rye and Derwent rivers in Yorkshire. Photo below of the one we crossed near the ruins of Byham Abbey on the Derwent. You can see the tongue in the middle. All the canoeists in the group and the kayakers (most of them in ww RM boats) chose to slide down it that day. 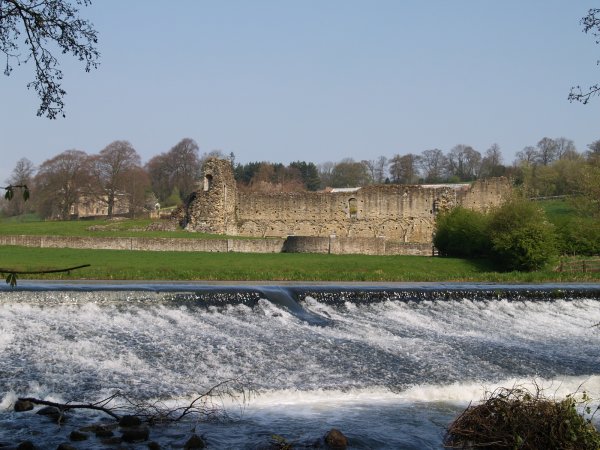 Thanks for posting that. I ave hseen many similar to this in the UK. If the water is deep at the base of the weir I suspect at very high flows there would still be a hydraulic. For rivers in the UK, I have only paddled on very placid rivers, many of which are almost canals, many of them have quite ancient structures in the water though, from mills, diversions and defenses.

Check out Howsham Mill, which was our destination and shuttle site on that River Derwent trip. It’s a charming 18th century stone grain mill that had been abandoned and partially ruined. but about 8 years ago some local groups got a project going to completely restore it and convert it to a small hydro plant with a main turbine where the old mill cogs were plus 3 Archimedes screws in the millrace. It now generates enough completely green power for 100 homes in the area and they built a small recreational park around it with picnic areas and an environmental classroom space inside.

The Mill sits on an island midstream in the river so they accomplished all the renovation using draft horses rather than machinery. They even added gates to create a playboat course for whitewater paddlers in the rapids where the millrace joins the main river flow.

One thing I do love about the UK is that they engineer even utilitarian public spaces to enhance recreational use by citizens.

That is really nice. I love the countryside in the UK and the desire the Brits put into having their wild lands and rivers and historic places protected. We rented a rowboat on the Derwent Water on a trip I took with my family when my sons were about 13 and 18 years old, was raining quite hard and we had the Lake to our ourselves for the day except for som RAF fighters doing low altitude passes. I think the RIver Derwent is much further south though.