Greetings,
I recently picked up a used, cream-colored (champagne?) Swift Mattawa that the factory tells me was built in 1998. It was sold to me as a Kevlar boat. It is much lighter than my Royalex Wenonah Adirondack, but when I got it home and weighed it I found it wasn’t quite as light as I thought it would be. If the scale is right, it came in a 46.4 pounds.

The oldest Swift catalog I can find online is from 2016. There is a guide layup that weighs in at 48lbs, and I’m wondering if that’s it. What I’m looking for is that 1998 Swift product catalog with specs on the 1998 Mattawa and information about the layup options back then. The Swift factory person who helped me by email was fantastic, but could only get me so far. She referred me to SCRIBD for the Swift product catalog archives. It’s not there, but there are a whole bunch of really interesting articles written by John Winters. Any rough estimates of this boat’s worth? Minor scratches. Brown anodized gunwales with some scratching. Hull has minimal scratches for its 20+ years. Wood is in good shape. I removed the carrying thwart to re-oil and inspect. The screw hole hits the end of the thwart but seems to still hold. I may look at replacing that in the future.
Thanks to anyone who can help! 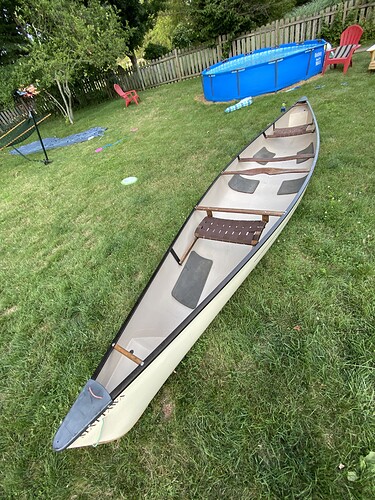 It probably is Expedition Kevlar the precursor to Guide Fusion meaning that it is not an ultralight Kevlar boat. It does have Kevlar but it also has S glass which makes the structure a little tougher.

I don’t have a Mattawa but do have a 93 Swift Heron and a 96 Otter and both are that layup. I do not know how much fiberglass is in the boats nor where. 46 lbs is about right for a hybrid Kevlar Glass boat

The canoe market is surprisingly strong right now. I sold one here easily in a couple of days. Your boat might be in the $1,000 range, probably more like $800-900 as a guess.

Thanks for the help on identifying the boat’s layup, Kayamedic. While I was looking for really light, I the 14 pound weight savings is still substantial for me as I get older and aesthetics of this Mattawa represent a big upgrade. I suppose it’s also nice that it is more durable than Kevlar UL.

I agree with kayamedic, it must be Expedition Kevlar. I had a lightweight Kevlar Shearwater solo and an Expedition Kevlar Osprey solo from the late 90’s. The Osprey weighed 44 pounds with thick wood gunwales and skid plates. I test paddled a lightweight Kevlar Mattawa and it was around 41-42 pounds with wood trim. So yours must be Expedition Kevlar which is the most desirable lay-up from that are (sturdy but still reasonably light). I’d estimate your boat to be worth a solid $1200 and probably a bit more ($1300-1400) if you live somewhere with a decent canoe market. Mattawas are nice and even fun solo and it’s a perfect tandem for a lot of normal people since the weight is reasonable for a tandem. A new one would be around $3500!

Thanks ppine. I paid above that, but have been looking for a couple of years in the western and central New York region. Saw a 5-year old Kevlar UL Wenonah Adirondack for $1500 but couldn’t quite go that high. And I also regretted it. Jumped on this without doing as much research (Swift info, especially the Mattawa, is pretty tough to come by) as I would normally. This gets me substantially lighter and I suspect I could still sell it for at least what I paid for it, especially after I remove and re-oil and/or varnish the wood.

TomL this is also helpful. I found a really old Curtis Nomad in fiberglass a few years ago. I love the boat but it’s obviously solo-only and not the roomiest paddle for rec floating and fishing. I haven’t had an opportunity to take it tripping, where I suspect the boat will thrive with a load. It also should have the gunwales replaced and a bunch of (mostly) surface repairs both inside and outside. I think I might check in with Dave Curtis about replacing the seat with a kneeling thwart and pads - Curtis/Hemlock Canoe is just a half hour from me. But since I don’t yet have an indoor storage option but do have OK side/top coverage (not water/weather tight) I’m waiting on doing or having that work done.

The Mattawa will store better outside with the aluminum gunwales and satisfies my solo and rec/fishing paddling. I think I’ll still be able to take it on lighter-weight trips and it will be good pond-hopping in the ADKs. It’s roughly the same weight as the Nomad, but way more flexible. I won’t get the speed that the Nomad has, and neither boat has the tripping capacity of a Kevlar Spirit II, but I can always load the Royalex Adirondack if I really need more capacity. And once at my destination, I think I’ll enjoy paddling the Mattawa unloaded more than the Nomad.

FWIW, I’ve been reading paddling.net for a few years. I came across Dave Curtis’ name numerous times and then the Nomad showed up on letgo. It was a good enough deal to grab it, but then I sent him pictures and he identified it and offered to have a look at it to consider work that needed to be done. I don’t know how many hours I’ve spent reading reviews. I hope eventually to be able to pay forward the help I’ve gotten and continue to receive. Thanks everyone.