Tell me about inflatable kayaks.

I have only seen a couple in person . It’s been awhile and I was not impressed.
But, I’ve seen T-chuck’s photos of his in action and they have changed my mind a bit.
I looked at Sea Eagle ads and they look pretty good. Looking at the Pro Solo.
How do they really paddle? My impression is somewhat like a rec boat. How rigid are they? Certainly better than an air mattress. How well do they turn? How do they act in the wind?
Beautiful day here but still cold.

My Sister and her husband have a sea eagle fast track tandem that paddles well. I think Willowleaf is a fan of the pacboats.

Pakboats aren’t really inflatables. They are skin-on-frame (similar to the original traditional native and early European kayaks) with collapsible aluminum skeletons inside a fabric and rubberized/plasticized shell. They do have inflatable sponsons, full length interior tubes that help to tension the skin and add flotation, but those aren’t the main structural components of the kayaks…

TsunamiChuck often used a Feathercraft Java (I think he may have sold it?) which was a really high-end inflatable that also had an aluminum “backbone” (as do many models of the Advanced Elements inflatable boats.) The Javas (and the tandem model, the Gemini) were really cool craft that compared well in performance to hard shell sit on tops. But unfortunately Feathercraft folded up shop 3 years ago so they are no longer available unless found used.

Older style moderately priced inflatables used to be pretty floppy and sluggish, but with the use of the “dropped-stitch” construction they can now be made more rigid. I’ve yet to test paddle any of the more recent models. There are some glowing reviews of them by actual users/owners over at the foldingkayak.org forums if you want to broaden your feedback search. I hope to try some out eventually. Much as I love my stable of folders, it would be nice to have something I can set up in 10 minutes rather than 30. Been considering a Trak folder (supposedly takes 10 minutes to set up and performs like a hardshell) but the $3K to $4K price tag would mean I would have to sell off most of the current fleet.

Among the drawbacks of inflatables are that they have to be somewhat wide in the beam and that the inflatable walls somewhat limit internal cargo space. You also have to top off the inflation in cooler weather, colder water since the air volume reduces as it cools. Conversely, you have to make sure that you don’t leave them ashore in the sun or on the roof rack without relieving some pressure (also true with PakBoat and Feathercraft sponsons.)

Sounds like they could use an overpressure relief valve.

I have an Aire Tributary Sawtooth that I use a lot. Has a pressure relief valve and paddles like a rec boat. Have aJava that takes a downwind sail. I’d tippy for a 28” wide boat and hard to get up to speed

I helped my neighbor inflate his but he has yet to launch it. Looked impressive in the living room. Kayak is genuinely well made. Paddle is a toy though. Your height and wing span will easily reach over beam for efficient paddling. Heck, for the price under $300, free shipping through end of month and 180 day return for full refund policy, why not?

I googled your cited Sea Eagle Pro Solo and got this https://www.seaeagle.com/SportKayaks/SE330 and scrolled to page bottom for first of 4 option packages.

Please keep us posted as to your choice and paddling impressions.

Even the Razorlite 393, at under 13’ and 28" wide is essentially a sit on top rec boat. I have heard that they are definitely an improvement over the 330 models, which are barely a step above pool toys and sag quite a bit under a weighty paddler.

The Pakboat Quest 150 is 15’ by 24" and is 9 pounds lighter. I have the smaller Quest 135 (13’ 6" x 23") and it performs very well compared to my similar sized hardshells. In fact, I briefly had an older Perception Monterey 14.0 that I picked up cheap and used for a loaner until giving it to my sister in law. The Monterey was pretty close in dimensions (14’ x 24") and on one occasion I paddled both in the same day when I took a friend out on a local river. I put him in the Monterey but after lunch he wanted to try the Quest so we swapped. I determined that effort and speed were pretty close between the two boats. The Monterey did like to windcock so we had the skeg down (likely adding some drag).

Another advantage of the Quest is that a full deck can be added (it comes as an option) and the kayak converted to a full sit inside with spray skirt, which is a bonus in windy or cooler conditions – they can even be rolled.

Naturally the surface drag on most folding skin on frames is going to be higher than on a slick plastic or composite shelled boat (with the exception of TRAK kayaks, whose hydraulically tensioned skin is tauter than a gymnast’s butt). But in rough water I’ll take a folder any time – the slight give in the shell allows it to absorb some wave force instead of being battered by waves,

The RazorLite is the one that interests me.

With the technology available for inflatables, especially the stand up paddle boards with the cross stitch construction, you’d think someone could make a 17’ish foot sea kayak type design that doesn’t resemble a rec kayak. Probably just not a market for it?

Johnny, I think the problem is that the dropped stitch rigidity can only be achieved with flat surfaces, hence the models using it so far are necessarily flat-bottomed. Ideal for an SUP and decent for a rec-style boat for calm inland waters, but a flat hull is not a sea kayaking profile.

Feathercraft, who were always innovators in break-down kayak design, tried making a fully inflatable performance sea kayak about 5 or 6 years ago with their Aironaut, which was made of parallel inflatable tubes. I don’t think many ended up being sold and they ended up being so costly to produce that they dropped the design. Those that did buy them reported that they performed surprisingly well, though some felt they were “twitchy” and instable.

Hull profile is critical to sea kayaking performance and the precision of the shape is pretty critical. Hard to dial that in with a inflatable components.

I think TRAK has come up with the best design for a break down kayak that can be set up quickly and match a hard shell in profile and performance.

Pic of the Aironaut below: 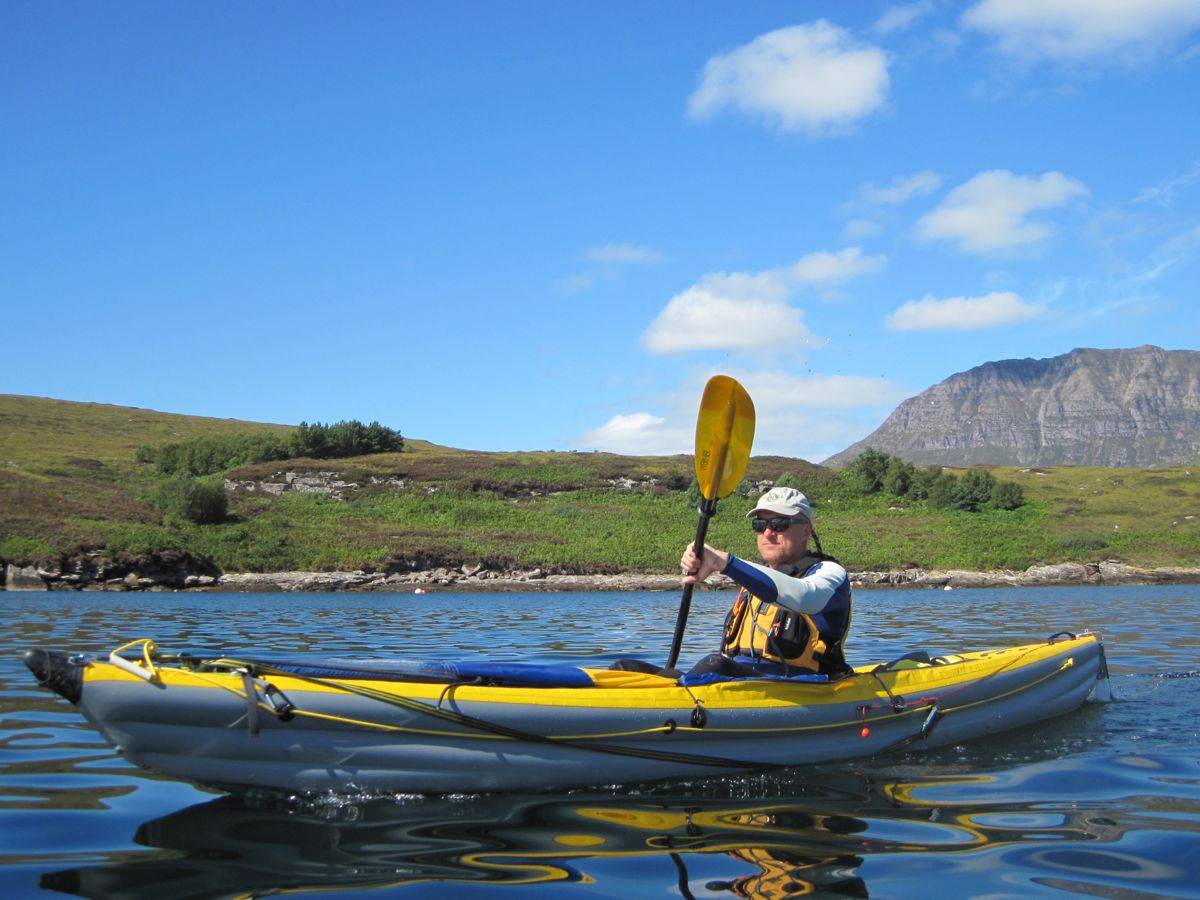 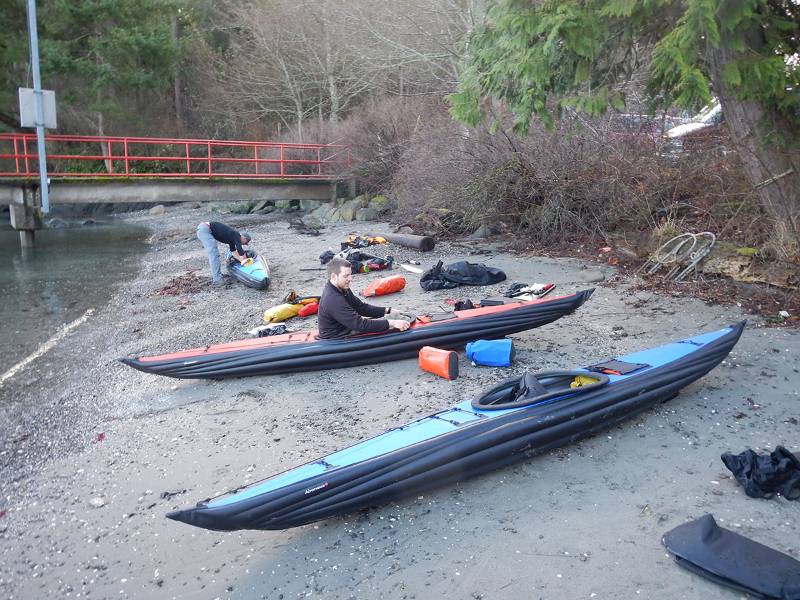