I am adding to a very old conversation from 2008. I tried to reply to it but it seems that the thread is so old that it has been closed. So I will provide a link to the original thread and post a new one.

Just curious, are there any cheap and easy to add skegs or fins that I could put on a 8-9 foot WW boat for something resembling a tracking on flat water for short paddles? They should be removable or retractable so that the boat can still do what it has been designed for -

I too am interested in adding a temporary skeg to a whitewater kayak.

I whole heartedly agree that the best route is buy a used recreational or flat water kayak rather than monkey with the designed use of my whitewater kayak.

However, I’m coming at this problem from the following perspective:

(1) I am just learning whitewater kayaking. I took a couple of classes 20 years ago with a borrowed boat and had a solid flat water roll. But I only made it onto whitewater once. Then life happened with a move to another part of the country, kids, new jobs, and I never made it back to whitewater.

(2) I’ve been wanting to try whitewater again for a while now and just got a decent deal on a used whitewater kayak (LiquidLogic Flying Squirrel 95).

(3) We live near a lot of flat water options in creeks and rivers leading to the Chesapeake Bay just 20 minutes away. While I’m not too thrilled with flat water kayaking in general, I would paddle on flat water to practice whitewater skills or to paddle with my wife. We are a good hour away from whitewater.

(4) My wife is interested in flat water paddling but not whitewater. And she will probably be agreeable to spending several hundred dollars getting a used kayak for her considering the cost of renting. But she’s not likely to be also agreeable to me buying a third used kayak for me for flat water. And I really don’t want to store three boats in our limited space anyway.

So after reading that old thread, I was pretty discouraged. But then I read this excellent article about skegs and rudders by Tom Watson: 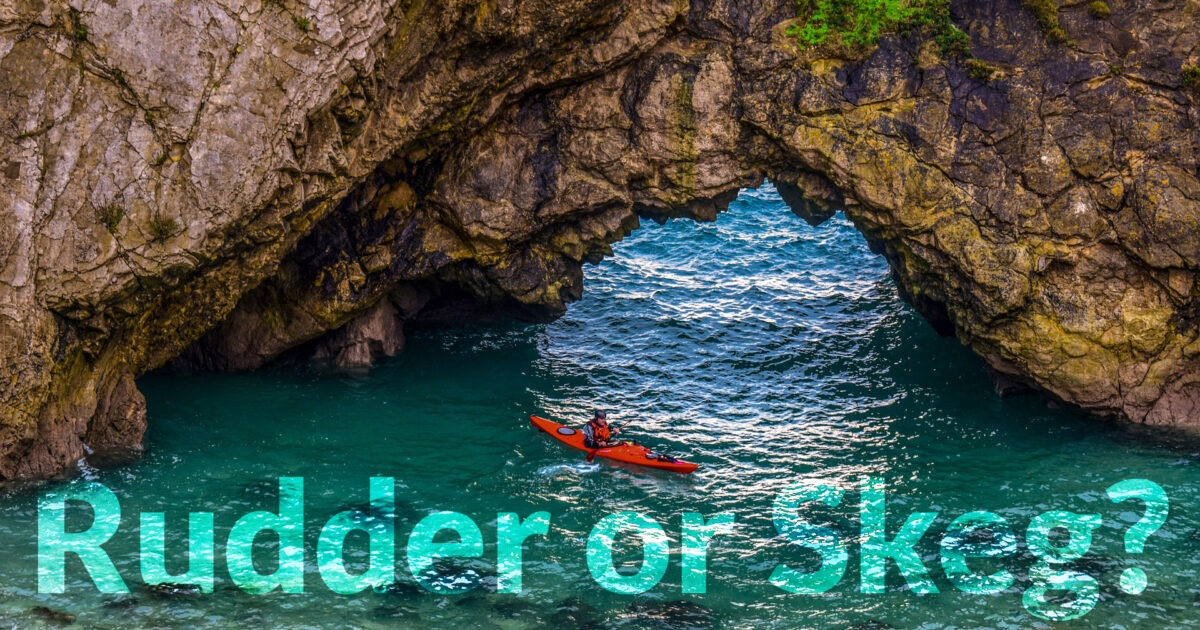 A rudder or skeg is designed to aid in the steering of a kayak thereby minimizing the need to making continual correcting strokes that can cause fatigue and perhaps discomfort.

My temporary skeg does not have to look like a fin. Yes, of course, using something that is hydrodynamic would cause less drag and reduce paddling inefficiency. But man, I was looking to get on the water quick with my wife to encourage her interest and be able to track better than going in circles around her if even the slightest breeze hits me.

So I latched on to the idea in the old thread of dragging a tennis shoe just to reduce the tendency of a whitewater kayak’s stern from swinging out as soon as I stop paddling and to make my strokes more about forward motion than about directional control. I combined that idea with what I learned in Tom Watson’s article and devised a quick, easy, cheap, and surprisingly effective “noodle skeg.”

I cut a piece of a large pool noodle with one end angled and cut slots in either side through which to thread a 1” wide NRS tie down strap. Then I strapped the noodle skeg to the stern of my whitewater boat.

I could have done something similar with the strap to make a hydrodynamic fin shaped skeg from Amazon ($16 or $23) temporary. And I still might based on my experience with the noodle skeg. But an 8” tall fin skeg from Amazon may overcompensate and end up causing my bow to spin.

I can report a very pleasant result with the pool noodle. This fix was a great improvement for tracking a whitewater kayak on a slow moving creek. The small profile of the noodle could not keep me on track when paddling vigorously but it could track at a slow or moderate pace. The kayak still spun when I stopped paddling. But there was a such a significant improvement in tracking while paddling that I consider the experiment a great success.

I obviously recognize that the performance of my noodlized whitewater kayak could not hope to approach a kayak designed for flat water. Still, by using readily available items around my home, I saved money and space for the occasional jaunt on a slow moving creek with my spouse.

The remaining problem is naming the device:

I think I’m partial to Skoogle. 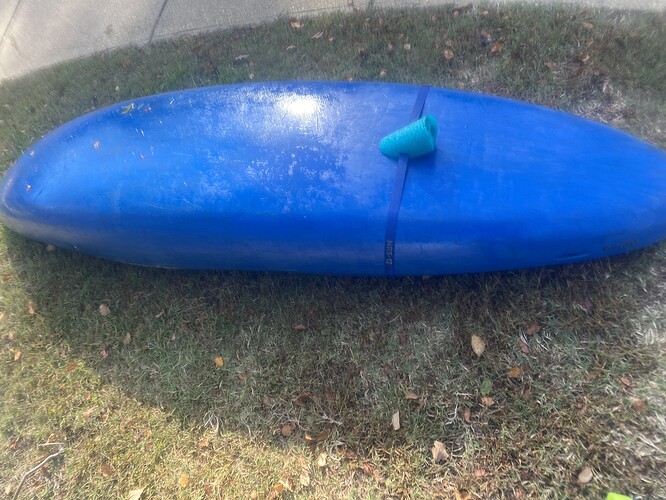 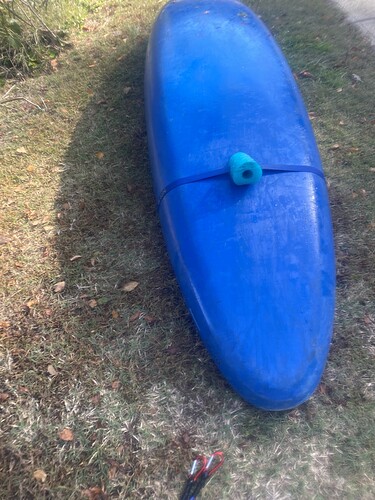 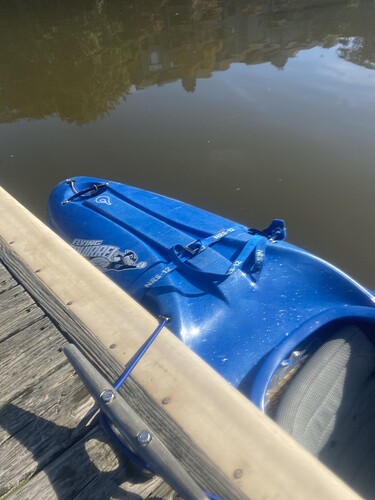 At first glance at the photos I thought you had converted the kayak into a jet boat and given its model name of Flying Squirrel a whole new dimension.

While your engineering is nifty why not just work on your blade control for your return to whitewater? Shorten your forward stroke power phase, incorporate stern rudders and bow draws as a finish or precursor to your forward stroke. All of these will come into play on moving water.

As to names, Ramen Speed keeps coming to mind.

I do indeed need to work on strokes. I plan to take whitewater classes in the spring on the Potomac. I’ll ditch the noodle when practicing on nearby creeks. Hopefully I can refresh my recollection of what I learned 20 years ago.