Tenkara, fish, and lily pads from an old canoe

I thought I would share what I have been doing in the mornings before the temps get into the 90s. There is an old farm pond of about 3 acres on land that has become forest. Several years ago String gave me about 20 Fragrant Waterlilies. They have done very well in the shallows of the pond. The pond runs about 10’ deep. I was introduced to Tenkara rods in early 2019 and found I loved the simplicity of this method of fishing. They are a Japanese method of fly fishing without a reel. The rods are sectional telescoping down to about 20". My rods are 12’ long when extended. They are very limber and the last about 16" of the rod has a diameter of about 1/16". I have used them to fish for trout in the mountains, and bass and bream in rivers, lakes, and ponds.

We keep the fiberglass 16’ Mohawk canoe we bought back in 1974 at the pond with a couple of aluminum paddles. When I turned the canoe over I noticed a fair sized red wasp nest at the stern under the seat. When paddling solo I sit on the front seat and face the stern. The wasp didn’t seem disturb by me sliding the canoe into the pond so I felt the better part of valor would be to leave them alone. Wasp larvae makes a great bait that bream just can’t resist, so I had bait if my wet flies didn’t catch anything. That was my plan B .

There was an occasional splash and circle of ripples on the waters surface, turtle heads above the surface watching or going down to tend to what ever it is they do underwater. Saw a fair sized snapping turtle that let the canoe get close before going under. The dragonflies were out in force. My second or third cast I hooked about a 2 pound bass. What a fight! I did my best to keep it away from the submerged pond weed that is a good way to break the 6# tippet. It eventually became tangled I managed to landed it anyway. Unlike me not to have my phone or camera. Drat!

I also caught two blue gill, two shellcracker, and a large golden shiner. A big largemouth bass broke my tippet in open water, and I called it a morning. The fish don’t always cooperate, but they did this morning.

I took a couple of photos of the lilies in the pond while flying my drone there. I was out there watching the redheaded woodpeckers on a dead tree with a nest hole in it. They and a squirrel raised cane when a Coopers Hawk landed nearby.

I am posting some photos taken in the past of some fish I have caught, and a photo of my son and his wife in the canoe at the pond with a canine stowaway. Also a photo taken in FL of a lueucistic (white but not albino) red headed woodpecker. The last photo is of a snapping turtle that had come ashore to feed on the persimmons that fell in Oct at the pond years ago. I wonder how big that one has grown 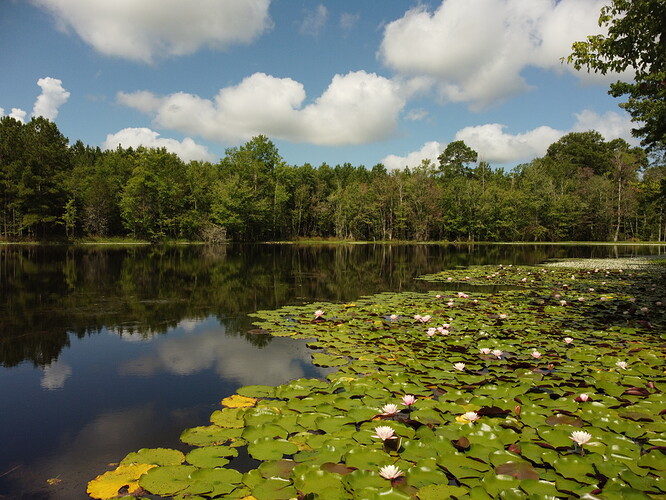 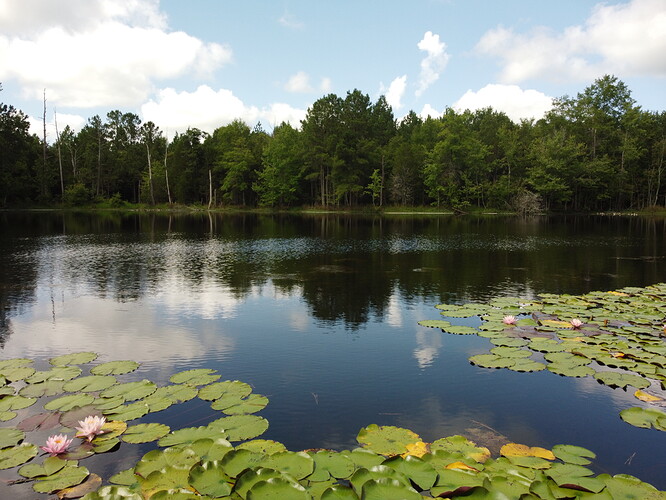 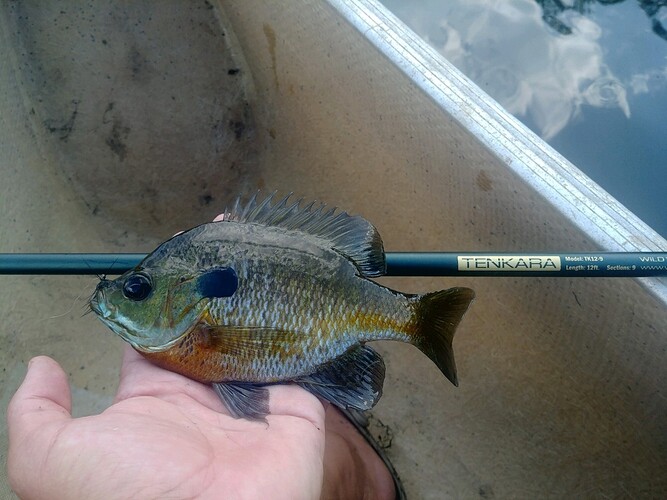 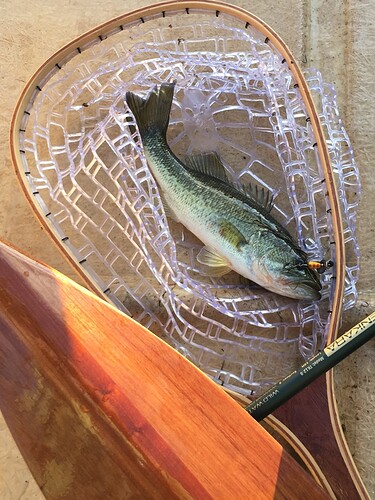 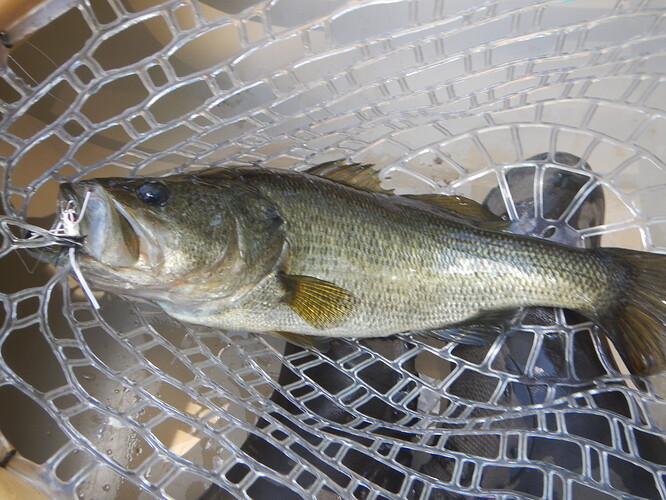 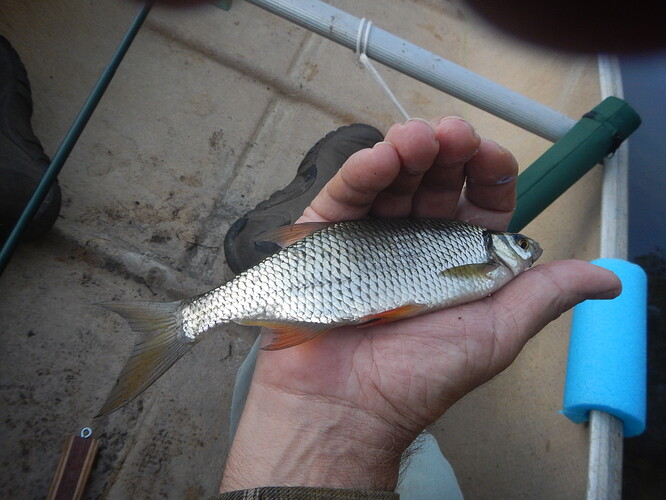 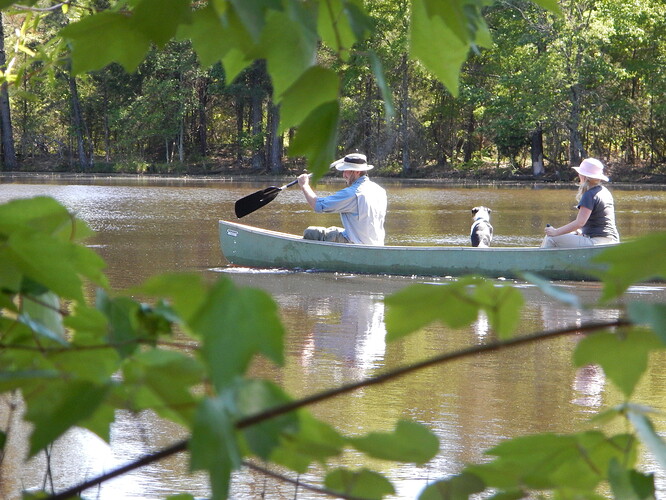 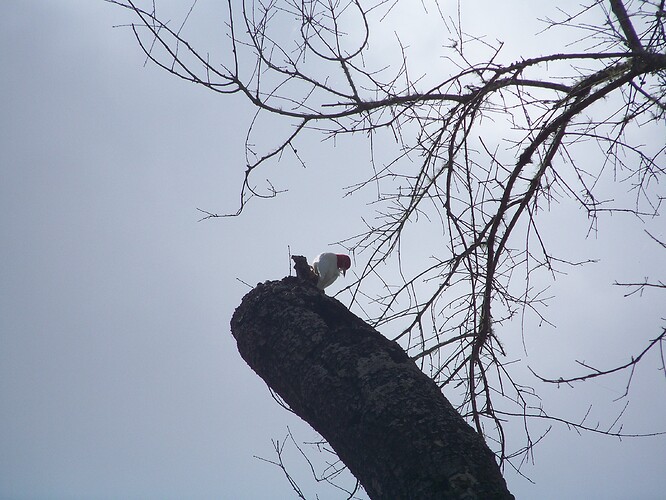 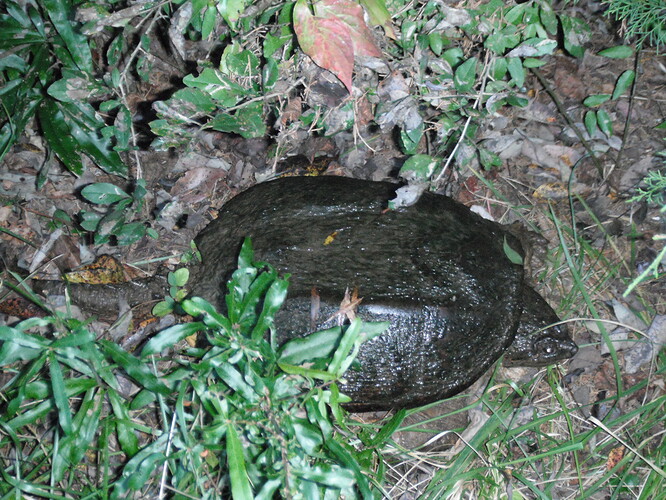 Somehow, I missed the invitation.

Thought I should add a photo of some rods two different styles and what they look like when telescoped down. They are very convenient to travel with. They can even be slipped under the bungees of a sea kayak. The red with a traditional grip is a 10’ 8 section rod and the shorter green rod with a cork handle is 12’ and 9 sections. 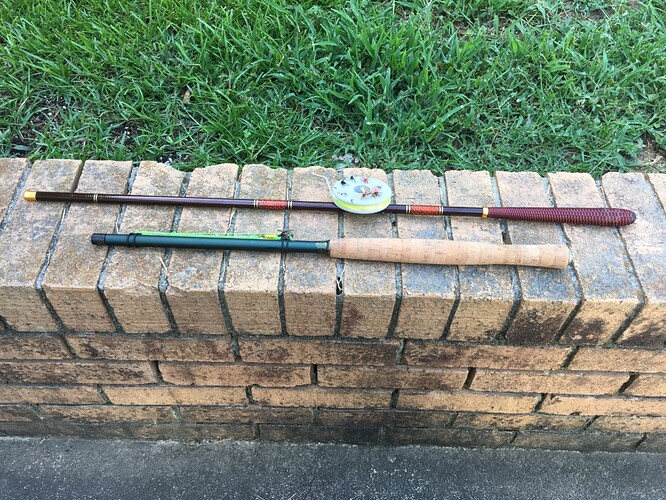 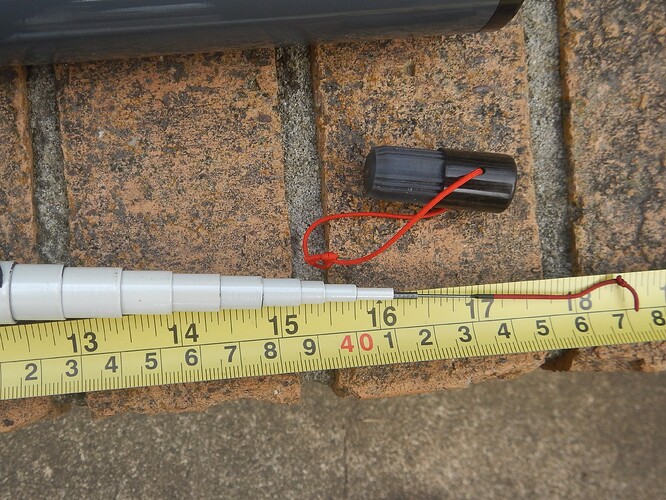 LOL, Maybe one day next week could work, and you could bring Honey with you.

She’s awfully young to be hanging out with you but her daddy will be there.

Here is a photo of us in our first canoe back around 1977 fishing for Redeye smallmouth bass on the Santa Fe River. There were reports of them being found there. I have caught them on occasion in the Chattooga River while trout fishing on fly rod and tenkara. It is also called Bartram’s bass. A quote from the SCDNR site on fish in SC.
“Ongoing research indicates the fish in South Carolina and parts of Georgia is actually a separate, not yet described species, sometimes referred to as Bartram’s bass.”

Nellie took this photo of Carol and me fishing on the Santa Fe. Note we are wearing our PFDs back in the day. 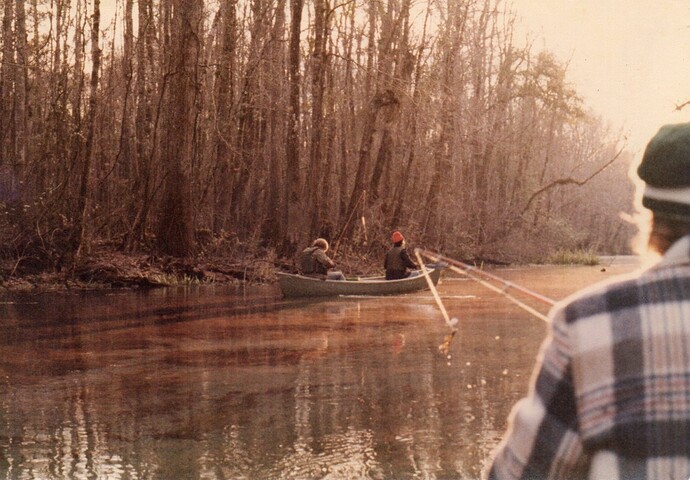 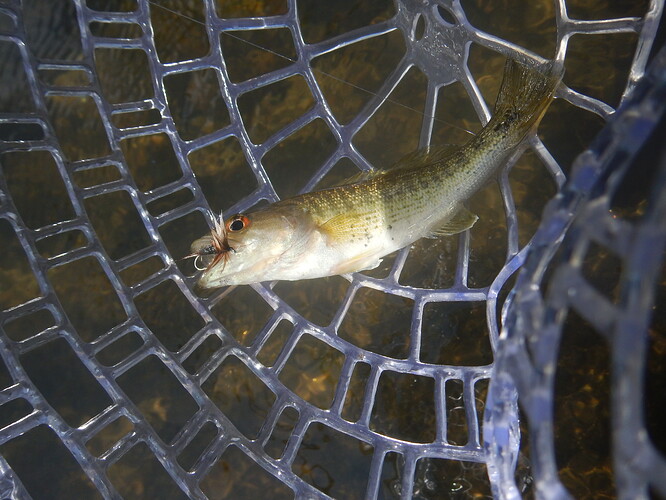 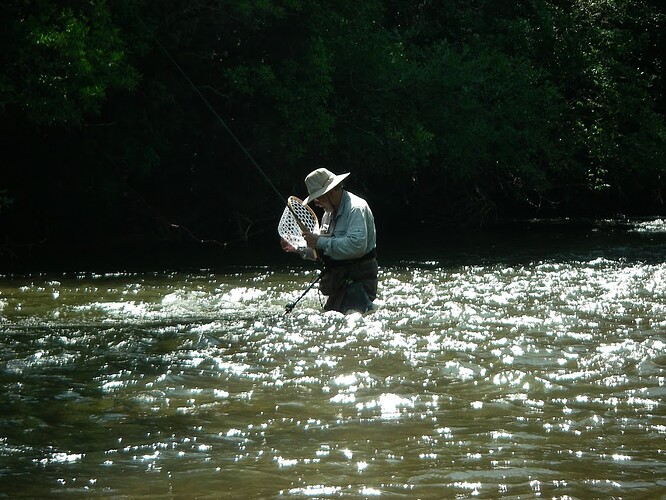