That's not a stick

Had a lovely paddle this morning with temps in the 70’s. Stopped twice to let the pup romp around and play with sticks. 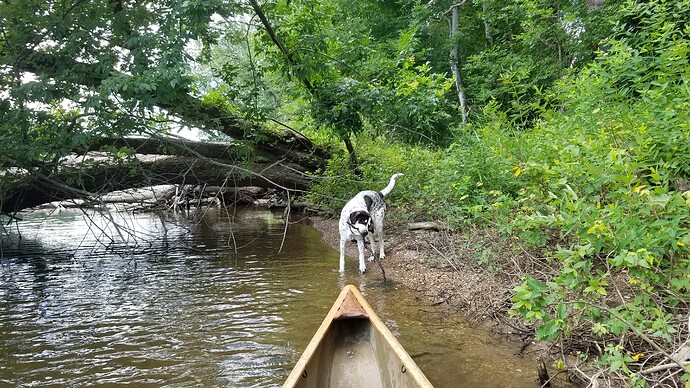 image4032×2268 5.23 MB
When we got back to our put-in/take-out I make her wait while I load the boat and gear on the vehicle and then we play with sticks in the river before we leave. She found a good stick but then saw a better one so she dropped it…right on an innocent rat snake. 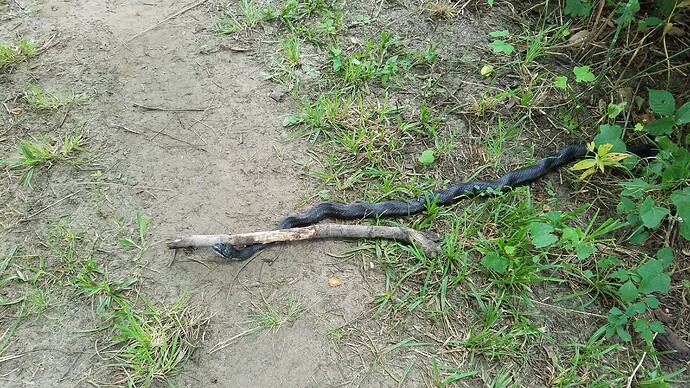 I hope the snake got safely away.

No worries. I protected the surprised snake from the curious mutt and everyone went on with their day. 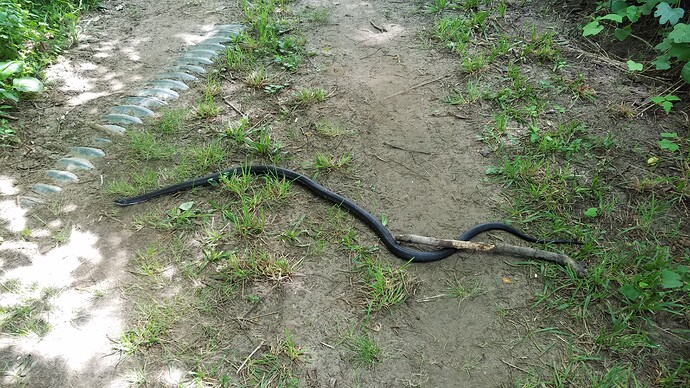 And I thought this was a thread about Greenland paddles.

Good man. I’ve picked up saved a couple and they are typically docile.

I was assigned one summer to work at a power plant construction site to do scheduling and production tracking and they gave me my own little office trailer at the end of a double line of maybe 40 crew and office trailers, a virtual hard hat ghetto. I was right beside a river bank (the Conemaugh) and coming back to the trailer one day I spotted what I figured was a scrap of 500 mcm cable (we were the electrical contractor) under the trailer open steps. turned out it was a large and gorgeous rat snake. I mentioned it to one of my co-workers and he and a couple other guys wanted to kill it with a shovel but I made it clear that anyone who messed with my snake would be in trouble. They found this funny since I was one of the few women on the project and was less alarmed by the snake than they were. It hung out around there regularly for nearly a month and I am sure that its presence was why I had one of the few trailers that never had mice. No doubt it found plenty of rodents around the trash strewn jobsite. I figured my trailer offered the best location from which the snake might slip into the woods or to slither under the adjacent trailers to hunt, and nobody came down that far but me so it wasn’t bothered.

Eve’s got new friend.
No Devil here keeping house.
And the fruits of this one’s labors,
won’t slip-in apple nor a mouse.

And a rat,
that’s also snake,
ain’t two bad,
when one’s at stake.

I was hiking with friends along the Chatooga and a black rat snake was in the trail. I picked him up to show them and they had been apparently teleported way behind me. City people.

This beauty lived in the rafters of my ex-beau’s horse barn (right above the loft where we kept the kayaks and canoes) and kept the oat-seeking vermin under control. 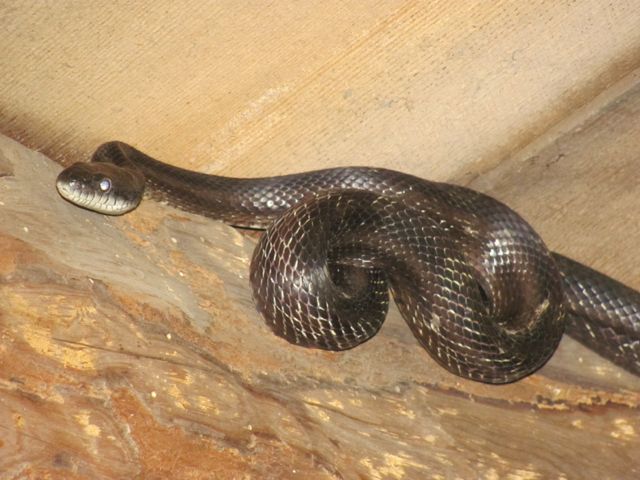 And this timber rattler was watching us as we hiked through a beautiful meadow full of wildflowers and butterflies near Karthaus in North Central PA. Easily 3’ long. Yes, I used a zoom on that shot. 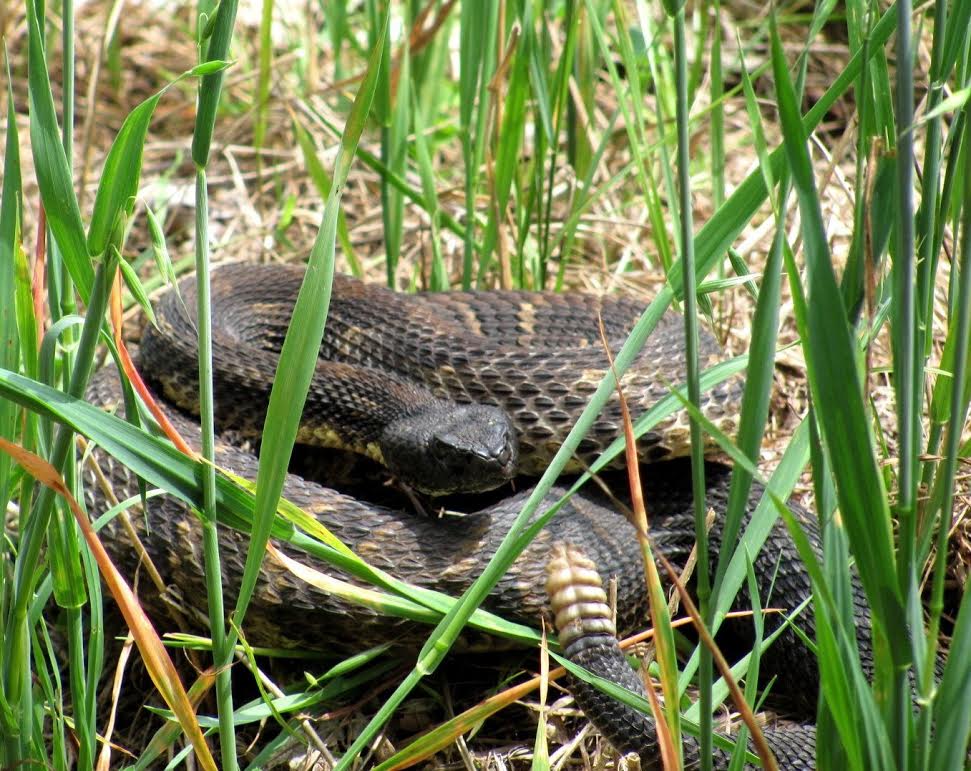 Well they do apparently grow to 8 feet so I’ll admit to pausing for a moment or even taking a half step back when I’m surprised by one. In my experience they are totally docile.

The snake’s body posture in the first pic seemed very unusual to me. My snake expert brother in law said it’s normal for ratsnakes to kink up their body when alarmed, so apparently having a coonhound drop a stick on you and then sniffing your face from an inch away is alarming for them.

Same scenario four days later. Same coonhound playing with sticks. Different snake. This time the snake coiled and struck at the dog before I could intervene and as string said the dog instantly teleported to a safe distance. Pic shows snake making u-turn. 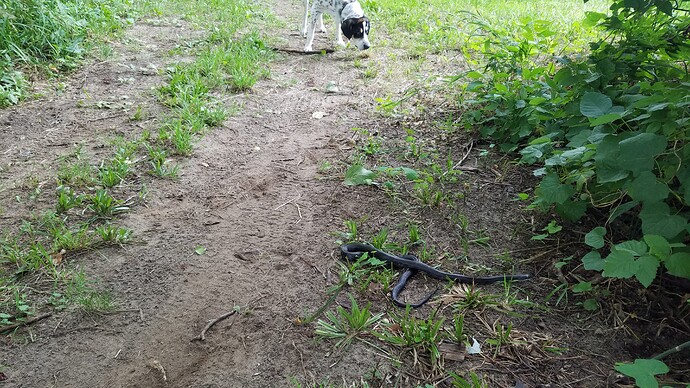 I know cats have an instinctive “teleporting” reaction to the visual cue of a snake and wondered if dogs might have it too. You can test it with cats by sticking a zucchini or cucumber behind them while they are focused on eating, as soon as they turn and spot the “snake” they are airborne. I recall watching a PBS documentary on the Namib Desert that showed an African wildcat, from whom modern domestic cats are all descended and which looked just like a standard household tabby, stalking and attacking a venomous viper, repeatedly dashing at it and slashing, then leaping away. Apparently wild cats are experts at killing, and eating, venomous snakes and are hardwired to react to them.

Lots of YouTube documentation of this – this one is short and representative (mute the stupid music) and at 2:30 one of the moggies actually “kills” and eats the offending vegetable. 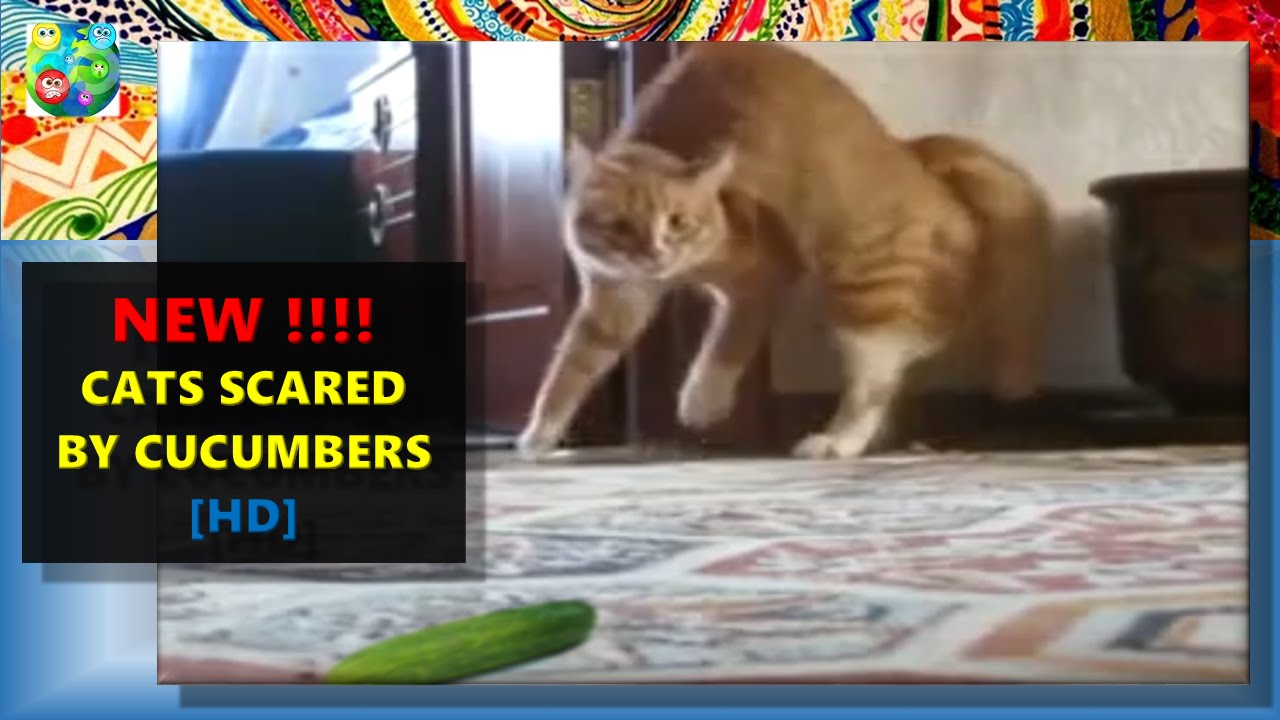 Though dogs, not so much. Begging the question: are dogs smarter or dumber than cats? 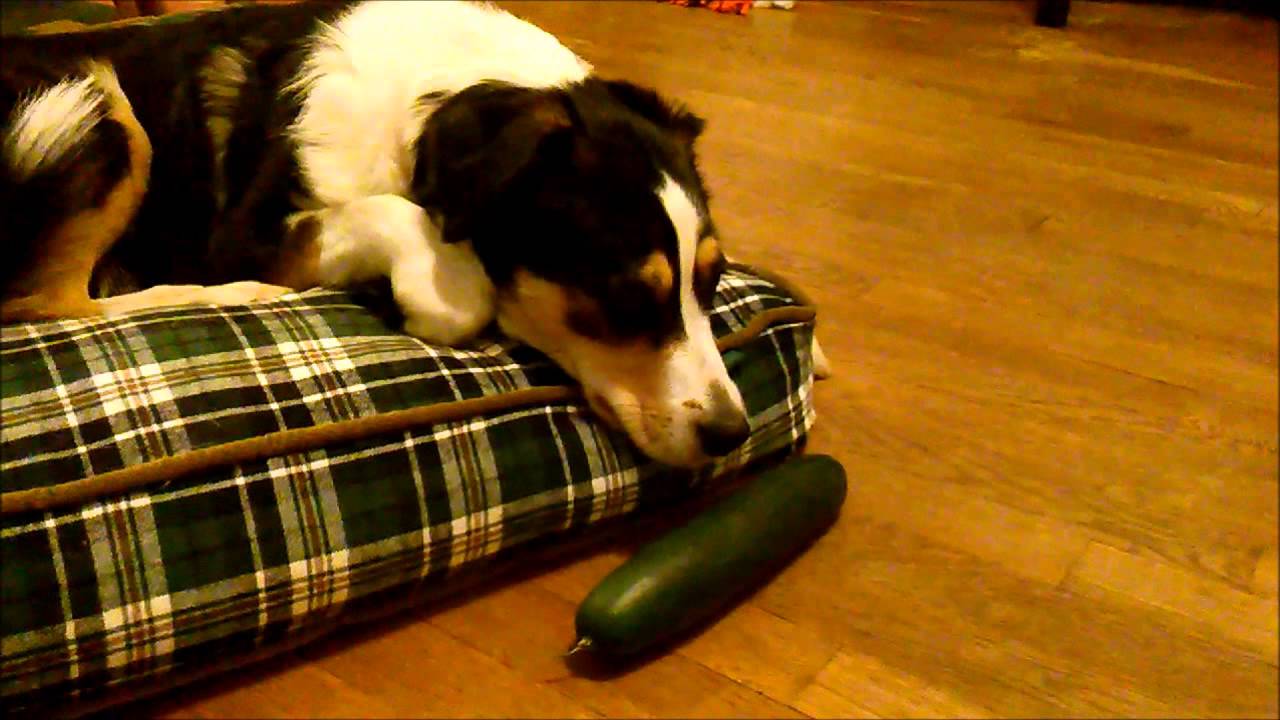 There was one video of a Yorkie unhappy with a large zucchini but it looked like one of those little yappers that has issues with everything. Might just be the rat-catcher breeds that have that instinct.

So my dog retreats from a snake that strikes at her and cats retreat from cucumbers and we’re trying to figure out which is smarter?

They both live off humans for free since we’re talking about who is smarter.

I live “out in the sticks” and so after many years of blowing all my earnings on gas and car repairs from commuting into one town or another for work, I took a job at a sod farm near where I live.
The sod cutter we used was basically a Ford tractor with a hydraulically operated apron at the tip of which was the cutter head - three blades; one 2’ horizontal one and two smaller angled vertical ones. They cut through dirt whenever the machine worked and so required frequent sharpening. So we had a ramp made of a short section of railroad tie and a couple of 2X10s. We’d drive the front wheels of the tractor up on the ramp, LOCK THE BRAKES, insert a metal brace to prevent the apron from falling in case of a hydraulic failure, wiggle under the thing (and its a pretty tight fit) and sharpen up the blades with a file. Very routine thing. We’d do it maybe a dozen times a day on a busy day.
Anyhow, one day I was doing that and I happened notice movement out of the corner of my vision and looked over into the triangular space made by the ramp. Looked straight into the face of a rat snake less than a foot away from my nose. If that snake had mistaken my nose for a rat he’d have had me by the nostrils for sure. That would have been a hard thing to explain afterwards.
But you’re right. They’re docile.
I’m not really all that afraid of snakes, but I did add another item to the check list before crawling under the cutter head from then on.