Not the cyber boomerang virus; I’m referring to the one that attacks your body and just when you think you’ve got it beat, it comes right back twice as strong. My wife and I are in our 2nd and maybe 3rd round of this horrible bug. I think it might be called a flu virus and it attacks your respiratory system. It is extremely virulent. If for any reason you must visit your doctor, clinic, or hospital, I would highly recommend wearing a mask and washing your hands a lot. This thing can be a killer for anyone who is a bit puny already. Stay away from crowds and good luck.

I fought a similar one. Took over 3 weeks to get rid of the first pass. The second wasn’t quite as bad. Then my wife brought a flu like thing home.
This winter has not been fun.
I hope you are recovering.

Sounds simply awful, magooch. Hope you both recover quickly and stay healthy. I’m Polly Paranoia about winter flu/cold cooties, avoiding crowds and always wearing a lightweight pair of wool gloves when shopping. The moment I’m in my car the gloves come off and the Purell goes on. Lots of hand washing and generous use of disinfectant wipes at my office. This has been a bad influenza year; a child in the Upper Peninsula died from it, as did a 40-year-old woman in the area.

I also take a Vitamin D supplement in the winter as sun exposure is nonexistent here between November and April.

Yesterday was very bad and my wife said I was going to the doctor if it didn’t get better. Well, I think it began to break last night and I might be on the mend, but still feel like I’ve been run through a wringer. At least I’m beginning to eat and can do some mild chores. Man I sure hope it’s true what they say about what doesn’t kill ya–just makes you stronger.

Unfortunately, I don’t think that applies to respiratory crud. Glad you are feeling better . Don’t push yourself. It can come back.

Get well soon all

Had it
Second round worse than first
Take heart. There was no third round
All is fine nowa

What I found unusual about this bug is that there was no sore throat–knock on wood. It’s as if it’s a designer virus. I’m almost ready to believe some entity is causing this crap. Anyway, I think today should be a little better than yesterday and I might even venture outdoors to soak up some vitamin D which is so inviting today. This should have been a day on the water, but with any luck–maybe in a couple more days. I think it’s going to be like starting from scratch.

I highly recommend sitting in the sun. The cat and I do it when we can. Even with the crud, it makes you feel better. If the day is too cold to sit outside, I after sit in the truck in the sun.
I don’t know how you northerners deal with those winters.

I don’t know how you northerners deal with those winters.

@string
And a decent down coat, good boots and a few hats and gloves for when you forget where you put the last ones you wore. I forget a lot so it takes three of each for me to make it out the door reliably.

Interestingly, when I was in Germany on a trip in December of 2016 I kept having to scratch my head about what they called dangerously cold temperatures. I would see the warnings and dash to convert Celsius to Farenheit, only to find out that the heavy duty alerts started any time they hit the low 20’s (Farenheit). It is no surprise that the near zero F temperatures they were seeing this last week were creating such difficult conditions, it is way out of the range they are accustomed to handling. But those temps for the northeast, while under the average, mostly mean that you have to crank up the heat a couple of degrees and run a faucet to protect pipes in unheated basement areas. It is not all that hard to manage.

Yesterday with warm sunshine and temps in the mid-fifties, I spent most of the afternoon outdoors piddling around. I even managed a walk over to the river and was surprised to see that the river level is almost down to summer-time level. Now I see in the paper that someone is worrying about water shortages this summer. That’s a joke–water shortage here in the PNW–not a chance. Well maybe less than normal amount of water for usual hydro-electric generation. No worries though, we’ve got a ton of windmills that sit idle most of the time.

When we moved from FL to SC the reduced winter sunlight had much more effect on me than the cold. When the sun did shine I felt much better.

When moved from Florida to SC, I never noticed. I was a year and a half old.
Growing up in Charleston with no AC , I definitely noticed . Waking up in August on damp sheets was not pleasant. Then our short winters with temps in the 40s and high humidity weren’t a hoot either.
We just had one of those and it seemed like everyone was sick.

@grayhawk said:
Reading some these replies got me thinking that maybe a hurricane once in a while is an OK price to pay for living in the Keys…

But blue ice is so pretty… 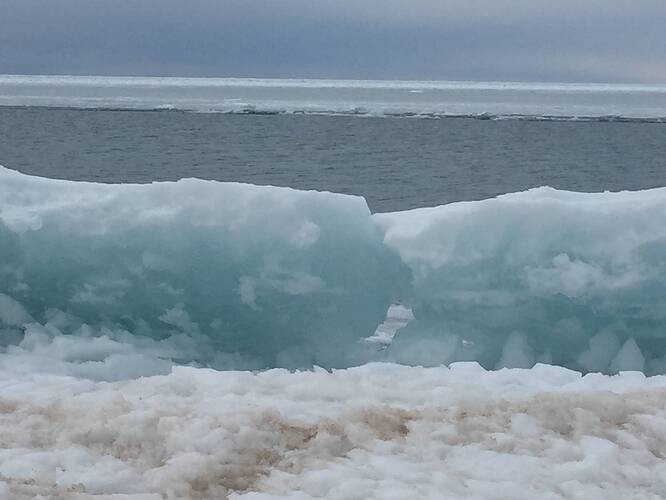 This is drifting even a little more off-topic, but Rookie, I hope you get to visit the shore this spring on a day when the wind changes and all that ice is on the move. I bet it will be awesome.