It is just showing what CAN be done…Not necessarily what SHOULD be done.

Thanks @Peter-CA and @CapeFear for your thoughts. You both have tried it in practice and noted the ease/speed in emptying the boat of someone who knows how to roll.

BUT you both expressed concern about the type of conditions and situational urgency that led to the out-of-boat paddler (with a roll). So, the potential speed savings in seconds over a standard T rescue (and raft) may not be worth the potential for boat and human damage.

Again, never seen this rescue before viewing the video. Sometime in the future, I would not be opposed to trying this with someone in a smaller surf zone, with each of us in RM longboats.

I agree with you and Raisins. As mostly a solo paddler who like/enjoy textured water paddling, a foot pump is something I am now looking into. I admit to some complacency BECAUSE I do have rolling and sculling skills and have not come of the boat in windy and choppy conditions, My exception has been in bigger waves of a surf zone (skirt implosion and suck out).

But, there could always be a moment in the future. Would like to minimize the “first and last” scenario.

PS. I DO CARRY with me both hand pump and paddle float when longboating with a point A to B and back type of trip. As much as I enjoy and benefit from rolling skills, I am not of the “roll or die” persuasion and like a backup.

Foot pump works to re leave wash over from getting in and getting out onto the water…just paddle out and pump as you go. {so not just for rescue.}

have been searching for days to find it w/ no luck. 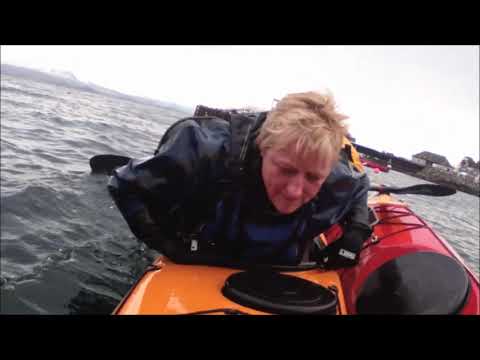 After a reentry and roll. In which case there will likely be water in the cockpit that should be emptied. This would be faster than pumping unless someone had a mechanical pump.

And those with slanted bulkheads at the rear of the cockpit (NDK and others) will be more efficiently emptied.

But I only plan to go over in calm, flat, water.

And I have watched loads of his videos. Thanks.

Much of my first year, I was mostly on lakes and ponds. I frankly got bored really quickly with paddling up and down a pond/lake. So, I started and then kept dumping myself into the water to practice self rescues. This then led to learning a roll on one side and then the other. Then I moved to tilting (edging) my boat as far over as possible, necessitating bracing – first with low and then high braces. I’ve been told that I did it backwards – that I should have learned bracing then a roll. Frankly, I didn’t feel confident about tilting and bracing until I knew I could roll after a capsize.

Of course, if skills in rescues, bracing, rolling, etc. is too much and boring (which some have found), that’s fine. Just stay on calm water, wear your PFD and immersion gear when season changes warrant.

Nothing wrong with individual paddling preferences and as long as you are staying within the requisite skills and safety parameters of whatever the particular venue.

The heel hook method is well done. I appreciated the demo in textured water and current.

Should there also be any concern that the rescuer could end up getting speared from the rescuee in conditions where a rescue would be needed.
The one situation where I think this may be of use is when you are launching off a beach and there are waves breaking onshore and you couldn’t get your skirt on before you launched. Then I could see paddling out to your mate and taking a DUMP.

I could see paddling out to your mate and taking a DUMP.

Many question the usefulness of this technique, and yet several posts give examples of when it might be used. Rock garden recovery/quick exit, skirt implosion, etc. I’ve seen many cases of skirts not fully attached.
There’s no doubt it will only work for folks that have practiced it. I have done so with regular paddling partners. It works without pulling the boat up very far, not even up to the bow hatch. That wouldn’t put too much stress on the coaming. But still I generally only try it in poly boats. And it’s seriously fast.
Will I likely use it in a real scenario, or is it a parlor trick? Either way I don’t mind having another tool in the box.

I can confirm that the risk of damaging your spray skirt is real.
I thought it should be safe to do with my plastic P&H Scorpio, but what I did not anticipate was that the cockpit rim has two screw heads on the top that are not perfectly flush with the rim (for the adjustable leg braces (is that the right English word?))
So, after doing it, I had a couple of small holes in my neoprene spray skirt (°hf tour skirt). Damn.

I had practiced the “normal” t-rescue pretty often and that was never a problem, so I guess the extra weight from the paddler was an issue - and there is also probably even more water in the kayak due to the underwater reentry and roll as opposed to turning an empty kayak around.

Thanks for sharing that. I have pretty much written this rescue off. Your post confirms the concern is real about dmage to a rescuer’s skirt.

If it truly is a rescue, I doubt a couple of small holes in the skirt would matter until after the event.

Since the over running boat is at an angle in the water, it will not shed much water.
Makes a nice video. A bilge pump would be much more effective.