The Eclipse was beautiful!

The time at full was extraordinary.

Here, it was raining.

Bummer, although we need rain.

It looked great on the NASA feed. We had 75% coverage above the 45th parallel, plus it was cloudy. April 8, 2024, is the next full solar eclipse. 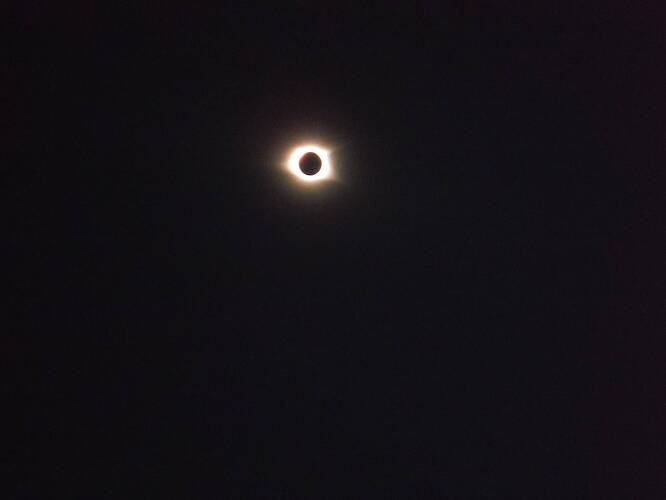 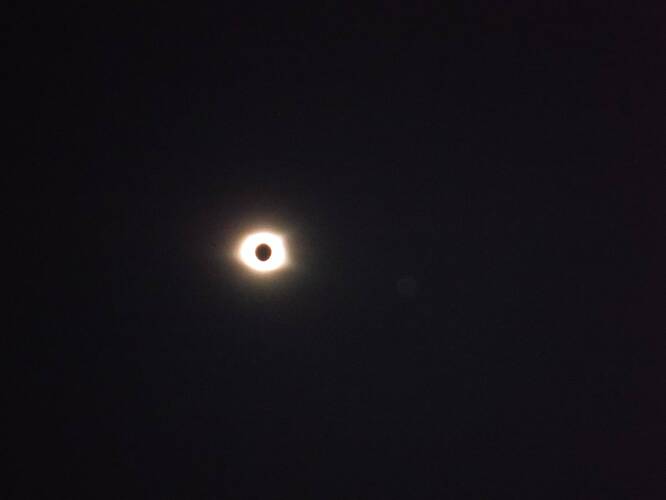 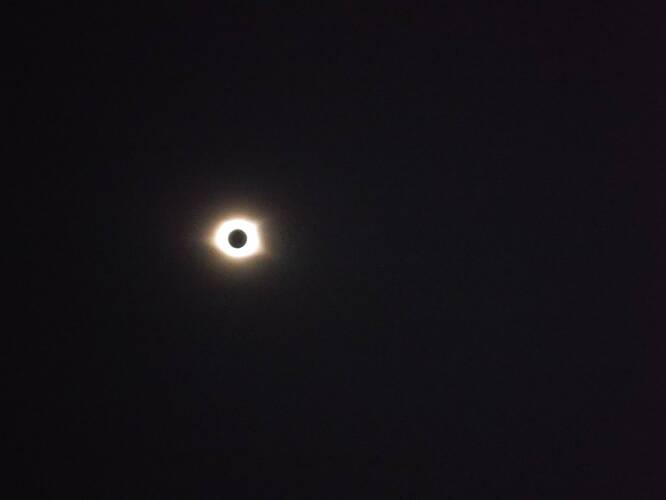 The weird part for us was that in the middle of the afternoon in a busy neighborhood, there wasn’t a sound and the temp dropped 10 deg.

Sure was beautiful. I was at a friend’s house who happens to live on centerline in Missouri.

Spectacular! I was lucky enough to see a total eclipse here in SC in 1970. I didn’t think I would be lucky enough to see another, but was really excited when I realized over a year ago that it would pass over our house. It met all our expectations. Totallity happens very fast as the last bit of sun is hidden. We had bats flying and Lighting bugs flashing. Such a Cosmic Coincidence to have the moon and sun to match so well as to reveal the crown around the sun.
The red spot to the left is a plane flying by. 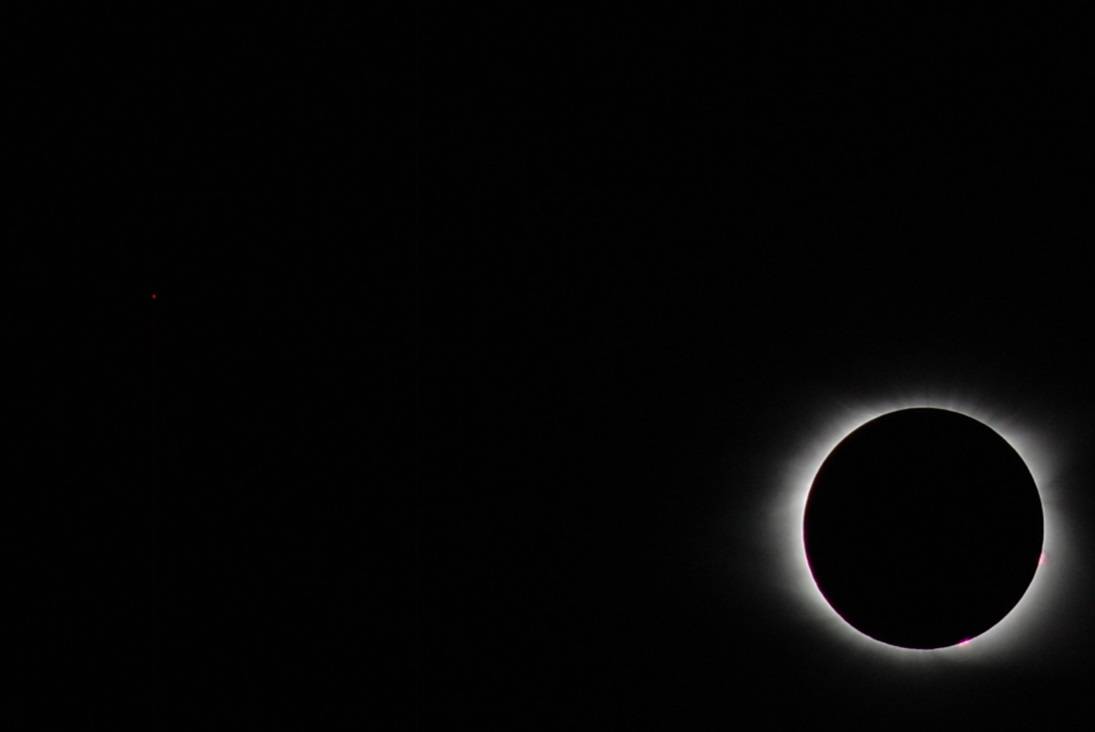 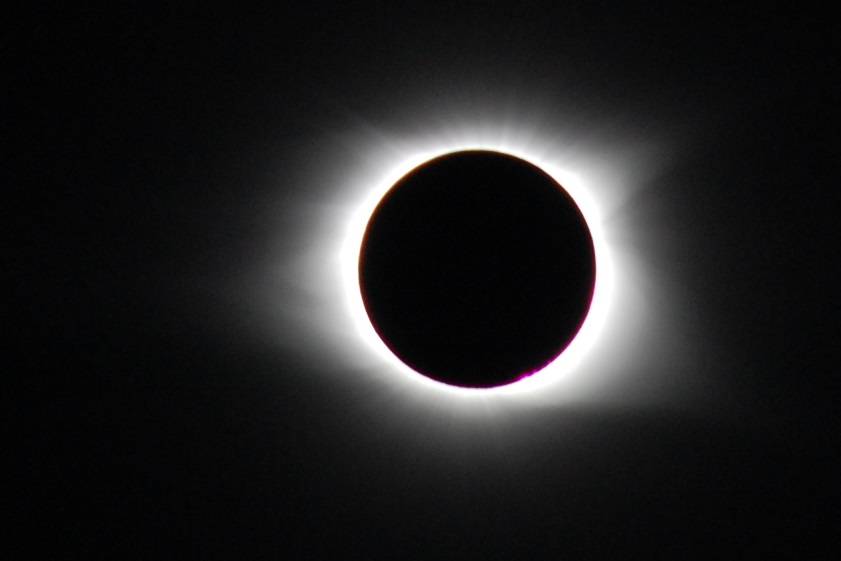 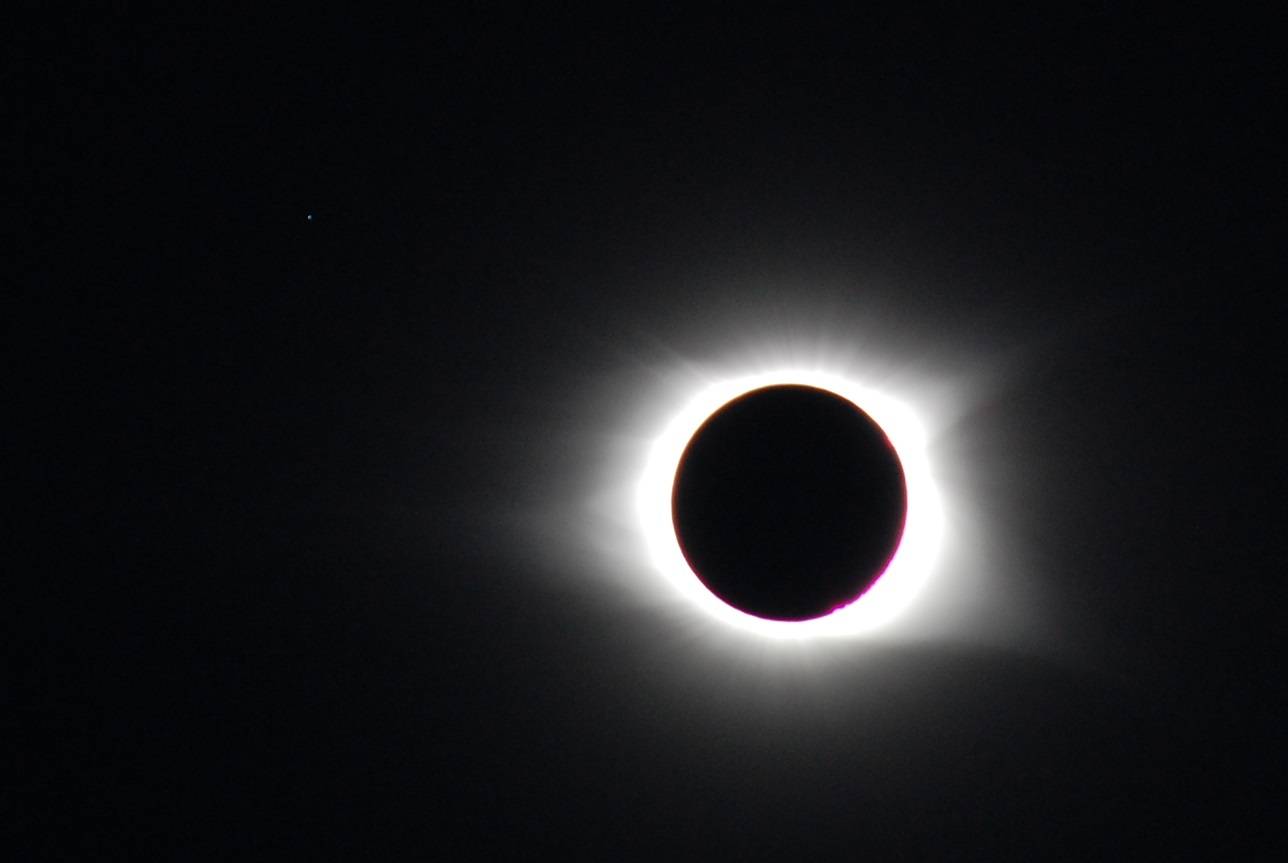 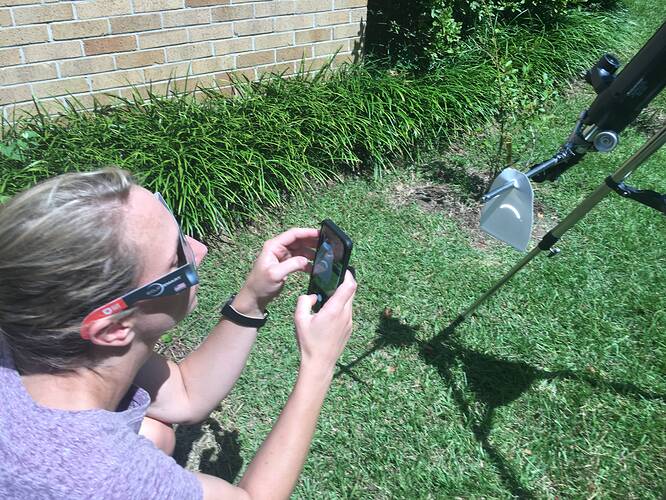 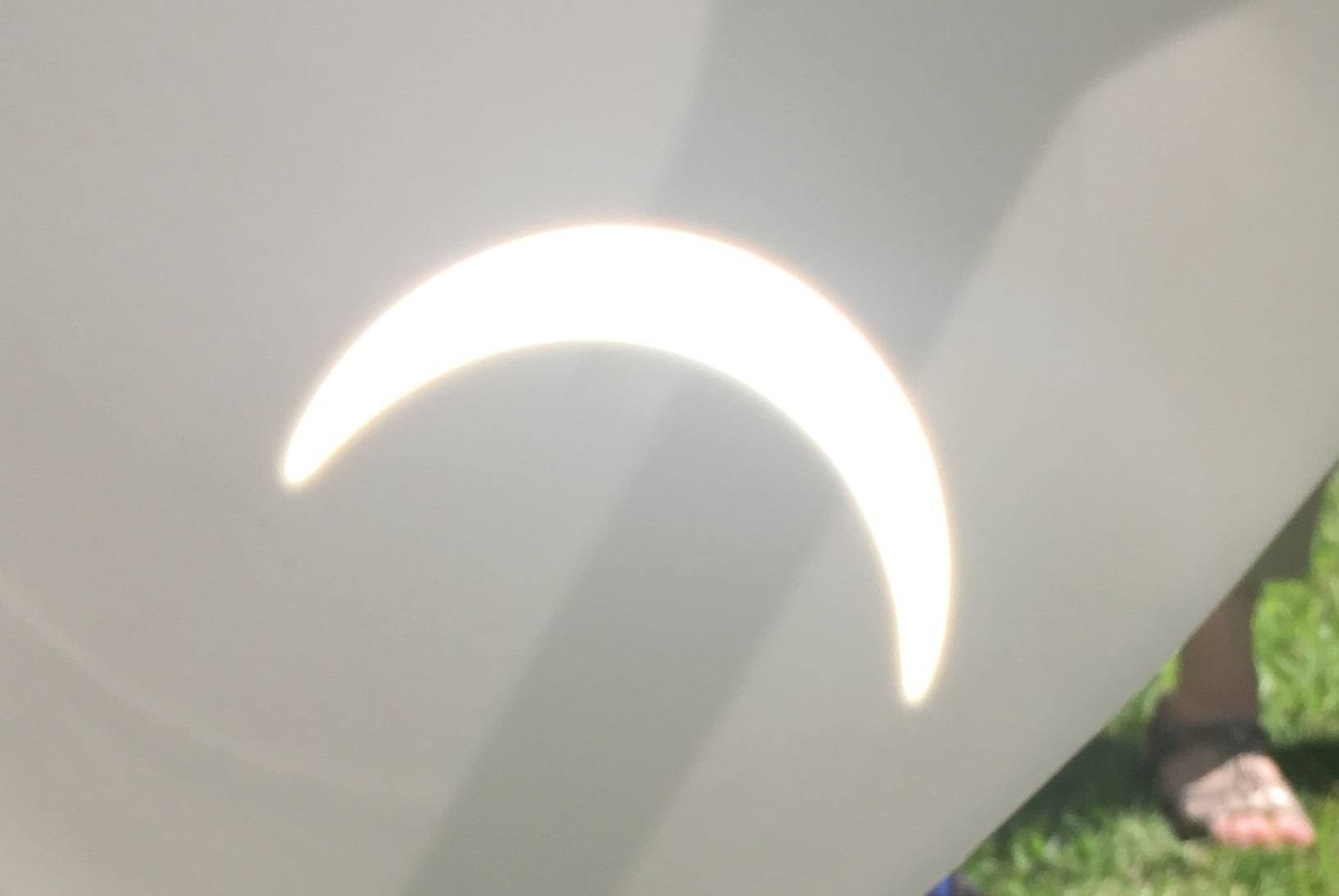 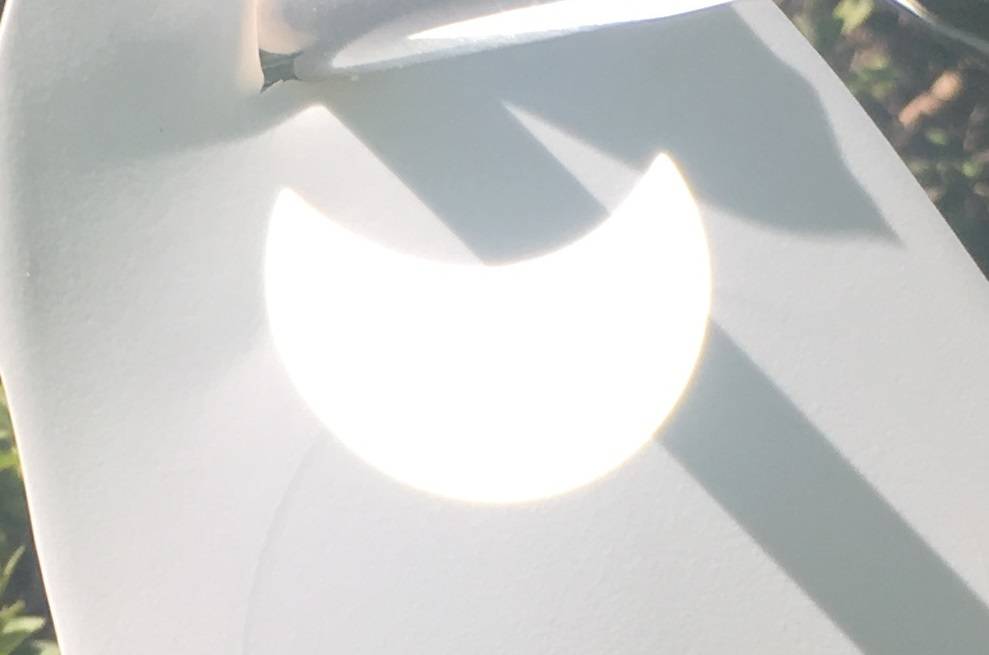 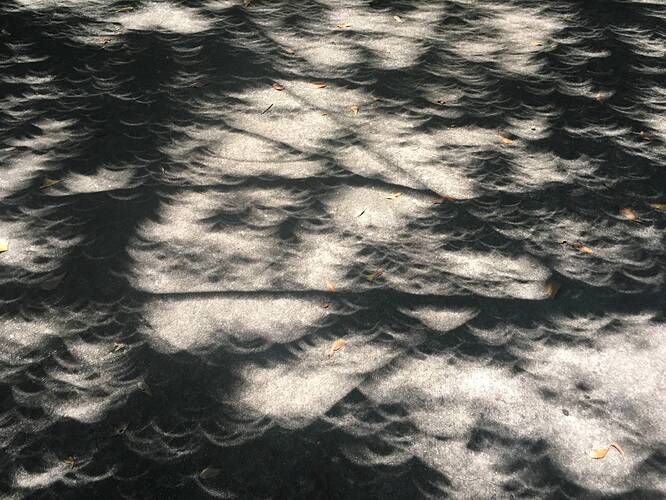 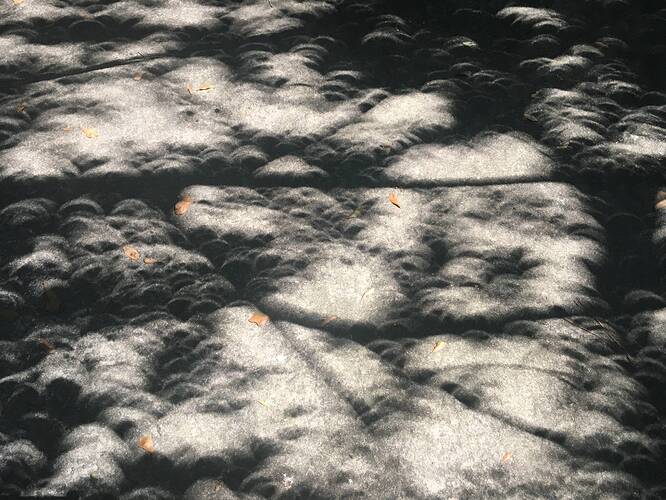 Yeah man! I visited your neck of the woods just to see it. Spent the weekend in Greenville. It was perfect.

Rex, I bet getting home wasn’t very quick for you. A friend from Asheville drove to Clingmans Dome to see it.
Took him 6 hours to get home.
Took us about a minute to put the chairs back in the garage.

Full is nothing like partial. I can see why so many people traveled so far to see it. It was amazing!

Castoff, thanks for making and posting those fantastic photos! I knew about the dancing crescents between leaves but had never seen them like what you show. Wow!

Here in SW CO, we had only partial coverage, but I decided it would make a pleasant time to go for a walk because temps would drop, and they did. Very, very comfortable for walking in, like autumn, Also more than a little frightening, as I thought, “So this is what life would be like with a smaller sun.”

The effect is weird in another way: The drop in temps and reduction of daylight felt like when a thick cloud layer obscures the sun. Yet the sharpness of my shadow was as distinct as if the sun had nothing covering it. Eerie.

When the 2023 annular eclipse occurs, we will be in the right location to see it. I am NOT going to wait in line for eclipse viewing glasses on that date. Gonna make sure to get a pair well beforehand.

No total eclipse here, and it was cloudy, but I’ll echo the “eerie” comment. I’m not sure how much coverage we had here. If I had to guess, I’d say maybe it was about 80 percent. Glancing up at the overcast sky, the sun really looked the same as always on a day having thin cloud cover - just a big hazy round spot that was far too bright to look at. But I brought a welding helmet with me, and when looking through that, the detail was clear. The sun looked like a crescent moon. And yes, things got darker, as if it were well on toward evening on such a semi-cloudy day, with all colors looking the same, and shadows on the ground being distinct, yet everything just seeming to be dim - much like in a school or college gymnasium with the lights freshly turned on and still “running cold” so not producing much light. It reminded me of the visual effect I saw in a crappy B-rated sci-fi movie not long ago, where some folks were stuck on a foreign planet and the lighting was much different than that which we know. It was a subtle yet stunning difference.

@string said:
Rex, I bet getting home wasn’t very quick for you. A friend from Asheville drove to Clingmans Dome to see it.

Clingman’s Dome…that’s where you hike up a steep hill and climb the ramp to the observation tower and look at the pictures on the railing of what you’d see if it wasn’t clouded in. Did he actually see it or was it fogged in?

Hey String, traffic wasn’t an issue other than the regular construction slowdowns. My wife and I spent Monday night in Greenville for that very reason. Had a fantastic meal post-eclipse at Tupelo Honey Cafe.

My wife and are up kayaking in St. Margaret’s Bay, Nova Scotia for a couple of weeks but at least it was sunny for the eclipse. Up here there was only about a 10% “bite” out of the sun but it was still very cool to see it.

It was an amazing day. I watched everything as it came across the US on the NASA television broadcast and a bit on the Science channel. NASA showed about 8+ views starting on the coast of Oregon and tracked the route to Charleston, SC. Here in Anderson, SC we had cloud cover with a break in the clouds as the full eclipse took place when I ran out to watch and then back in to the TV. Amazing.

I enjoyed seeing the photos above. My wife took three shots through the open clouds.

One Too Many Coronas, Eh?

Clingmans Dome was clear, I’m told.
And, although it was a mistake, it was worth posting twice.

Someday eclipse
cross sun shall tripse
whenst comet threads in sky,
and lightning streaks
braid mountain peaks
with not one cloud to eye,

the tapestry
cosmology
rolled out thenst flooring men,
some rose past fear
to greet grandeur,
“Say! Do THAT, again!”