Many of you will have seen my occasional updates on the status of my Trak 2.0 order. Needless to say, I’ve been quite patient. Many others, going by the numbers, have as well. Some are beyond patience and have even tried to take action against the company, which I can understand from an emotional standpoint but I don’t see it prompting anything positive or useful from the company.

I still want a Trak 2.0. I don’t want my money back. I want my boat. But, with an estimated delivery date of early 2021, and many missed paddling opportunities due to limited ability to move my other two full sized boats, I would like a portable boat before then.

So, I’m asking for a rundown of the other players in the market. Availability is, without doubt, one of the most important factors here. If I’m going to buy it the wait time should be less than a week or two. Price is also important, but I appreciate value over price. Packability, weight and capability/safety are important as well. If you mention a boat that shouldn’t be taken too far from shore due to a lack of safety features please mention that.

I’m willing to sacrifice a bit on some things at this point just to have portable/packable boat. The intention is that it will be temporary while I wait for the other one. But who knows? Maybe I’ll like it and keep both. Maybe I’ll sell the Trak clad and framed with unobtanium for a profit…

Your suggestions and comments are appreciated.

Not a lot of choice out there for light boats with reasonable performance with the demise of Feathercraft and Folbot. But there is one.

There are a lot of “novelty” folders popping up, like the plasticky Orus, which you would likely find disappointing. Your best bang for the buck at the moment while awaiting your dreamboat would be the Pakboat Quest 150. I’ve got its predecessor, the slightly lower volume Quest 135, and just had it out yesterday for the first paddle of the season. The Quest performs favorably compared to my hardshell sea kayak (P & H’s Easky 15 LV from their Venture rotomold line) and my high end $4500 Feathercraft Wisper folder.

I would not hesitate to take the Quest out in coastal conditions. Very clever design and excellent cockpit comfort with an integral low backband, sling seat and adjustable rigid foot pegs. Tracks very well and, like most folders, is really great in lumpy water. The multiple longerons and high pressure inflatable sponsons give it structural rigidity that makes it feel like a hardshell. It is not as impressive in that regard as the Trak, naturally, but for the price (around $1,400 properly equipped, a third what your Trak will cost) and 30% lighter, hard to beat. According to sale sites they will be shipping this month. No US direct distributor since Alv Elvestad in New Hampshire decided to retire the stateside business, but ScanSport of Norway is still delivering them through retailers.

One feature the 150 has (that my earlier “beta” model Quest does not) is that it can also be paddled as an open boat, sans deck. At 31 pounds it is highly portable, even packed as airline baggage, and I can set mine up in 30 minutes. I usually paddle it with a GP, and ran into one of the Trak “pilots” at my local lake using the same one (a Gearlab carbon Akiak). 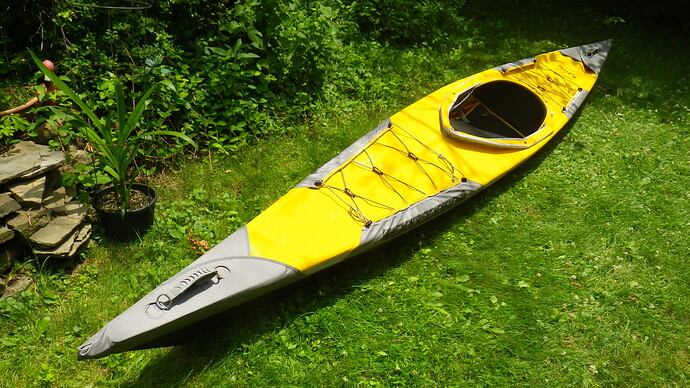 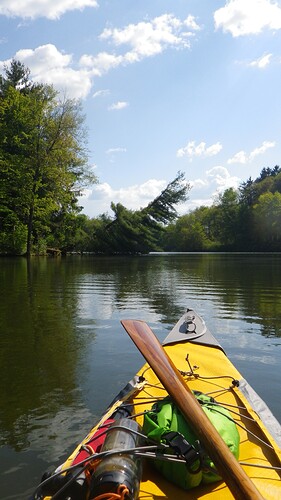 Natiraid is still around. Made in France {takes two bags and has a wooden frame}

Thanks for the detailed response. I was pretty sure you’d be chiming in here. Sad there aren’t more companies making these. With the Trak waiting list, you’d think there would be a place for some others.

I’ve never tried one, but they are still around

If anyone else is following along, I believe you meant “Nautiraid”.

Never heard of them before. I’ll be checking out their offerings.

Nautiraids are costlier and heavier than the Pakboats . Their Narak 460 (15 feet by 22") is closest to both the Trak 2.0 and the Pakboat Quest 150. It costs $3,250 so that is no bargain, and it weighs a ponderous 51 pounds. It looks like Nautiraid based in on the now extinct FC Wisper, though it is 30% heavier.

In your case, as a “consolation prize” until the Trak comes through, there is no way you can beat the Pakboat and I think you would enjoy it for the duration of the wait. And if you don’t decide to keep it, you could probably unload it for just a few hundred less than you paid for it.

There are not a lot of companies any more because there was not enough business to support them. Millions of people will drop a few hundred bucks on plastic junk but few will invest in something as mysterious to the public as a folding kayak. I will give Oru props for marketing their novelty boats and they certainly got market penetration for a while, but I don’t know any serious paddlers who favor them.

Feathercraft made wonderful boats but they also missed the boat (as has Pakboat) on marketing their products and educating the public on this kind of craft. Europeans and Asians have long appreciated their convenience, but Americans, with our big cars and garages, have been less open to them.

Any thoughts on the XT-17 Solo from PakBoat?

I started browsing their web site and hadn’t realized they had a larger offering.

Also, which of the accessories to make for safe and pleasant paddling would need to be purchased along with the boat due to custom fit? There’s a bunch of stuff I have on order to go along with the Trak. It can add significantly to the cost.

You were asking for folders, but are you open to consider inflatables? Sea Eagle 393rl RazorLite is a full drop stitch model. I have the tandem version 473rl to paddle with my kids and it performs quite well. Its an open boat though, more like a canoe with lower sides, so depending on your paddling inteterests, it won’t work.

A friend of mine got a XT17 on ebay, with purchase protection, and it is a nice boat.

I don’t have experience with the XT-17 but used my ex-boyfriend’s XT-15 a few times. It was a little oversized for me (5’ 5" x 150 lbs.). The XT’s have a lot of cargo room and the ladder type frame offers good rigidity (similar to their folding canoes) but it is a deeper hull and not as streamlined as the Quest series. Would be my choice for overnight camping trips on a rugged river but not for speed and handling. More of an SUV than a sports sedan, if you get my drift. Also heavier and a little more work to assemble than the simpler frame of the Quests.

As for accessories, I believe the Quests come with the optional deck, as does the XT-17. So the only option you need at extra cost is the rigid foot peg assembly that snaps into the frame (it was $79 when I bought the Quest 135) and their spray skirt (though there are some aftermarket ones that will fit it is a little tricky to find a good fit). The Pakboats all come with a duffel bag, patch kit and high pressure pump for the sponson tubes.

What about Klepper? I see their site is still up. They’ve been around forever and I know folks who’ve owned and loved them. Are they not price competitive now or what?

There is a Japanese maker called Butterfly Kayaks that makes some interesting folders. Their English catalog is a little outdated from 2015, but they have a kayak called the Crusoe 500 that is 500cm by 58cm. They are not cheap by any means, but they are worth checking out just for curiosity’s sake.

I still think, based on the facts that:

(1.) you are interested enough in performance to be willing to wait on and invest in the Trak, and

(2.) you don’t want to invest a lot of money in an “interim” boat until the object of your primary desire is delivered,

…there is no product I know of that would be more suitable for you than the Quest. Only other option I can imagine would be a cheap used Feathercraft Wisper or Khatsalano. But those are “cult” boats and almost never show up in good condition for under $3000. I totally lucked out getting my Wisper for $2200 in pristine shape 10 years ago. I only paid $800 for the Quest but it was a beta factory sample that I had to make a couple of modifications on to lower the seat (they subsequently corrected that before production of the Quest 150.)

You may want to check out this website http://foldingkayaks.org/phpBB/index.php

They have classified ads also. there is a Folbot cooper 17 for sale in Canada for 700 candian

Thanks for the link. Canada’s a pretty big place.

I found a used Trak in BC but seller will only deal locally. Can’t blame them, but me picking it up in person isn’t happening.

I appreciate the suggestions.

I received a quote direct from Pakboats for the Quest 150 today. Mike was quick to respond. He says 150s are expected to be in stock in 2 weeks. That means if all goes well I could reasonably expect it within 3-4 weeks if I order now.

Shipping cost of USD$ 217 seems steep, but I’m not exactly in a position to bargain.

I’ll likely have to pay HST on this when it crosses the border, so add 13%. Sometimes things slip through.

It arrived this evening. Incredibly fast air shipping, which for the cost I’d kind of expect. The only problem so far is that I received the wrong colour.

A quick email to Mike and I received about three apologies and the promise that he’ll ship me the correct colour deck (it’s the only different part) tomorrow and provide return shipping for the wrong one. He said to go ahead and use the one I have in the meantime.

I’m very demanding when it comes to customer service. So far I’m impressed with the responsiveness.

I’ve assembled it once on the grass. First time took longer than I’d like but I can see getting it down to maybe 20 min or less with practice.

It isn’t a Trak 2, but it appears well thought out and fairly rigid. The ability to remove the deck could be handy for stowing larger bags, making me consider portaging again…