As my husband and I were taking out at the boat ramp, I noticed unusual yellowjacket activity near the bottom of the ramp and very near me. I looked closer at what appeared to be a young dead snake.

The upper half of it moved. I thought I imagined it, But when it moved again, I saw to my horror that not only was it alive, it was tryng to swallow the rear half of a baby bird, and it did not like the yellowjackets who also were trying to dine on bird.

As I continued to gawk at it, two yellowjackets lit on its eyes. The snake tried to shake one off and the other one appeared to sting it.

I urged my husband to take a pic with his iPhone, and he did, I’ll try to post it here, The pic must have been shot as the snake moved its head, because the details there are fuzzy. But it still had the tail feathers and both legs of the bird hanging out of its jaws, and yes there is a large rusty bolt and nut distracting from the other elements. 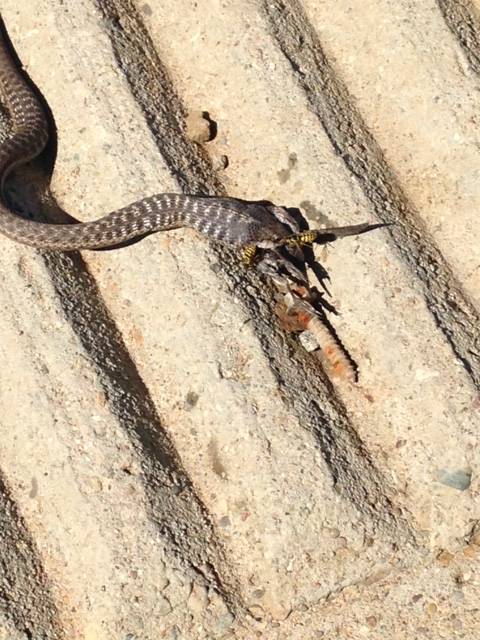 Nature can be cruel, but also fascinating!

Seems odd that the yellow jackets honed in on the affair

@JackL said:
Nature can be cruel, but also fascinating!

Seems odd that the yellow jackets honed in on the affair

From what I’ve read, when their natural food supplies dwindle in the autumn they seek out meat and even scavenge human garbage, sodas, etc.

Yellowjackets do eat meat, as I once found out the painful way. I was eating a roast beef sandwich outside. Yellowjackets were hanging around, I thought because maybe someone had spilled soda on a table.

I waved them away, or so I thought. Next bite of sandwich I took, an electric-sharp sting seared the inside of my lip. The GD yellowjacket had managed to crawl INTO my sandwich, unseen by me.

Today’s gang must have wanted the bird—the WHOLE bird—for itself.

BTW, I think the snake was a young rattlesnake. The head, grotesquely ballooned as it was from swallowing the bird, had two rounded bulges in back of the eyes, giving it the wedgy head of a rattler.

The jackets know that fall is here and are getting as much sustenance as they can.

So who got the bird? I’m guessing the reptile never let go.

I think it’s a gift to see something unusual in nature that makes you think and wonder.

I didn’t stay to watch the conclusion of this drama, but I bet the snake eventually got the bird all the way inside. When I first saw the thing, the bird’s head and neck were inside, and the bulge had not progressed as far as in the photo, which was taken about 6-8 minutes later.

The snake must have eaten something earlier, because it had a smaller bulge much farther down its length.

The question is really whether the stings disabled the snake or merely enraged it.

I’ll look for it the next time I go there. Probably all will be gone by then, if not from the predicted thunderstorms, then from someone stabbing the snake with a stick and tossing it elsewhere.

I watched yellowjackets cutting chunks of lunch meat off of a sandwich at a picnic. It would come to the sandwich, cut a chunk off, fly away to deposit it and then come back for another chunk. This continued for at least a half hour as we picnickers watched in fascination.

We had yellowjackets in Alaska and we would cut strips of salmon skin off and hang them just above a container of water. The yellowjackets would chow down and then fall into the water and drown. Definitely made the outdoor dining experience less annoying.

Neat trick! They must have gorged themselves to the point of being too heavy to fly. Very interesting.

Venom
plenum,
from fangs to tail,
some fine points fail,
to shade impale,

The perfect yellowjacket trap is a skewered hot dog, set over a bucket of water. The wasps gorge on the dog, fall in the water, and drown.

As for the snake…probably got taken off for lunch by a hawk.

We are being invaded daily by yellowjackets that perch for hours over or next to all the doors. I cannot open the door for more than the briefest moment to enter and exit.

Many of the wasps carry a round yellow sphere in their mouths (?). Is that a ball of food so they can hang out waiting for the time to sneak inside and overwinter, then build nests next spring? These must be the mated queens-to-be, who can hibernate if they obtain shelter.

This afternoon I skewered a cheap hot dog and put it across a plastic food container with oiled water in it about an inch below the hot dog. Then I put the whole thing inside a 5-gallon plastic bucket to shield it from the wind. To keep the bucket from being blown over, I placed rectangular concrete blocks around the base of the bucket. A couple hours later, ONE dead yellowjacket floated inside the food container, along with a chunk of hot dog. I guess it got greedy and bit off more than it could fly away with! But it was only ONE dead wasp. The others remained on the house walls, clutching their yellow pearls.

I might try again tomorrow. Would love to find a dozen dead ones in the oiled water.

They know winter is coming and get really desperate for food. They love anything sweet.

I think they are getting desperate for shelter, not so much the food. Some nights have dropped down to freezing, and they know it.

Yellowjackets are said to be beneficials. Kind of hard to keep that in mind after being stung repeatedly after I opened a door to a shed which contained a nest I wasn’t aware of.

I had my revenge later that evening.

A friend had one fly up his nose. He couldn’t be blown out so the guy crushed the beast inside his nose. T
He had to go to the hospital because he was stung repeatedly. 3 days later, his face was still swollen.

One stung me on the inside of my lip years ago as I bit into a sandwich which the monster had crawled into. The intensely fierce, electric pain made me vow to never let one stay near me or my abode. If they keep their distance, I don’t care about them.

Nesting inside must not be allowed to happen!

I took down yesterday’s hot dog trap because wild critters might tip it over at night. Good thing I did that, because game cam showed a fox ran by in the wee hours, as they often do.

Survey Says…100 Points of Flight
(This Aggression Certainly Did Arise)

“Serpentine, Shelly”
Falk’s advice he was sharin’.
But it was a painful bee line,
I fled back in this pine barren.

One hundred feet in my retreat,
abuzzed while tripping stumps post task,
Sharp pain nesting now also in mind.
“Now go back for that brush axe!”

I spraykilled 6 outside yesterday, using Raid. At least 9 more are still hanging around the building, waiting to get inside.

Warning: I read that crushing a yellowjacket releases scents that provoke its hivemates to swarm the crusher.

With that in mind, when I saw one inside on the floor, I grabbed some duct tape and taped it to the floor, good and tight but not crushingly tight, leaving plenty of extra tape at both ends. Then I waited a few minutes and carefully lifted one tape end to start rolling it up. Thus, I entombed the vicious bastid like a mummy.