Threw a boat away today

I spent the day prepping inflatables for a couple of trips on the upper new river. I decided since it was trash day to put the riken cherokee ducky out on the curb. It was an early self bailer but the floor has issues. One of the trash guys scooped it up and put it in the cab of the garbage truck.

I have a feeling the Maravia Raft may meet a similar fate. I’ll give it one more go and take a couple of pumps along. It is just not holding air that well. I hung onto the sevylor 100 ds that has a slow leak. Never could find the leak- tried soapy water and tightening the valve. My guess is a slow seam leak near the floor, I’ll carry a pump when I use that boat. I have another sevylor ds 100 that is still going strong. The tandem saturn duck and and aire tomcat are doing well but need a couple of thwarts to support the seats. So it goes with inflatables.

I have 9 plastic kayaks- the necky looksha is badly oilcanned and patched on the stern , the perception mirage has a cockpit crack, the pyranha shiva has a hole in the hull under the seat. One of my two wavesport diesels has a big crack between the seat bolts. I think some JB weld is in my future. The rest of my fleet is doing pretty well- pyranha 12r, 2nd wavesport diesel, wavesport y, and a pakayak all are good to go. My LL xp has a crack in the bulkhead, a tab on the hatch cover is broken off, it only has 1/2 a skeg, both ends have broken handles, and the hull has bit of oil canning but I consider it good to go. The poly madriver adventurer canoe has a wee bit of shape shifting going on but is river and lake worthy. I notice a number of my boats have torn handles. I think I’ve turned into the Fred Sanford of paddling…“junk runs in the family”.

Another weird thing- I got 17 pfds- unfortunately most are xl (my size). I have a bunch of helmets- most of those fit a small head.

I hope the family members and friends coming to paddle are big shouldered with small heads.

I have learned one thing through the years- don’t loan out your gear or boat that is your current ride.

I have never thrown out anything. I have a collection of old Werner Bandit paddles that are worn out at the bottom. I replace them, but I can’t seem to part with the old ones. Like you I have a collection of old PFD’s - many of them the old canoe PFD’s with ribs rather than flat panels. I also inherited a couple of helmets for small heads - maybe small paddlers don’t stick with whitewater.

I would not recommend trying JB Weld to repair a polyethylene kayak. I do know people who have used it on Royalex boats and been satisfied, but polyethylene is a very different animal.

Of course, thermal welding has become a popular method for repairing polyethylene canoes and kayaks made with linear poly. But thermal welding will not work on boats made of cross-linked PE, as a lot of early whitewater kayaks were.

I have used G Flex epoxy to repair two single-layer polyethylene boats, a Dagger Cascade C1 which had a big chunk of the cockpit coaming missing and about 1/2 the circumference of the remaining coaming broken off the joint with the hull, and a big bottom crack in a Dagger Response kayak. Both of those hulls were made of cross-linked PE. The repairs have held up well but in order to achieve a decent bond you must first flame oxidize the hull surface before applying the epoxy.

I also used G Flex to do a very extensive repair on a PE Old Town Penobscot 174 canoe. That boat was made of linear polyethylene but thermal welding was not an option because large amounts of hull material where missing at both stems where the hull had eroded about half way through. That repair has held up well.

I have spent a lifetime keeping boats out of landfills and plan to continue.

Still have every boat I bought. May start selling entry level boats as I replace them with better boats for grandkids. Id give a boat away before I land fill it. Thats an idea - fill with dirt and grow flowers or make an herb garden.

A local kayak shop here has done exactly that. The town of Franklin NH has a bunch of kayaks turned into planters all through it.

A local kayak shop here has done exactly that. The town of Franklin NH has a bunch of kayaks turned into planters all through it.

They seem to prefer old whitewater boats in Franklin. 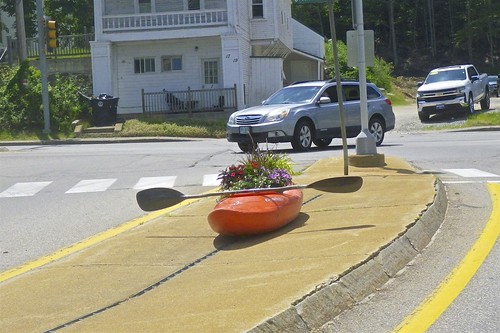 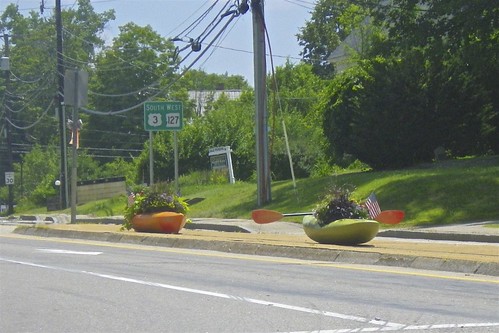 They get damaged beyond repair more often than flat water boats and sea kayaks. They also take up less space on the sidewalks.

So purty it makes me want to cry. Makes me cry! Call me hillbillie, but I do like it. I think it would go with the double duty pool at tractor supply. Cows can use it during the day, and party in it that night. You guys are the best. 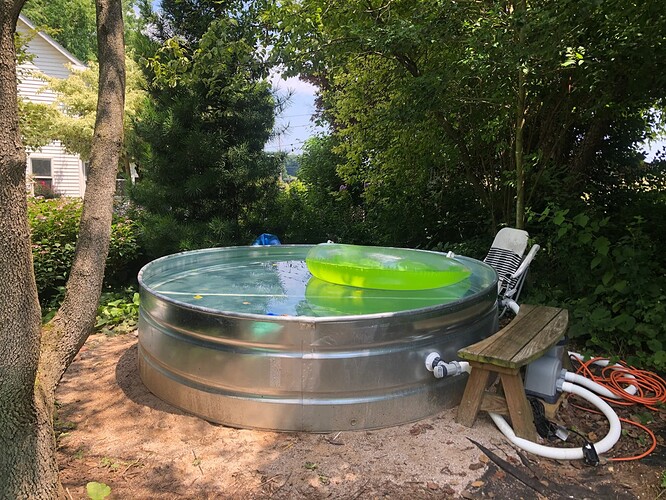 I cut up an old inflatable kayak once it reached the patching point-of-no-return. It now does duty as a PVC layer-vapor barrier inside my work shed roof. Also use the non leaking old tubular floor (from time to time) laced in as an “air bag” in the stern of my sailing canoe.

Too many PFDs and helmets? Throw a dozen on to the river just after a number of paddlers have gone down before you. Then follow up shouting, "Terrible yard sale in the last rapid set!"