We’ve got threads with pretty pictures, wildlife, and funny pictures. How about some ww stuff. Back when the knees had cartiladge and the hips were real I was a legend in my own mind. It would be nice to see some long boat ocean surfing pics as well.

Chattooga was always a thrill 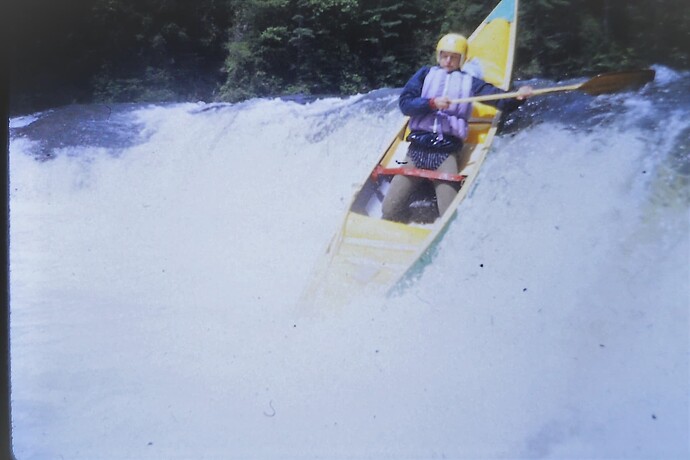 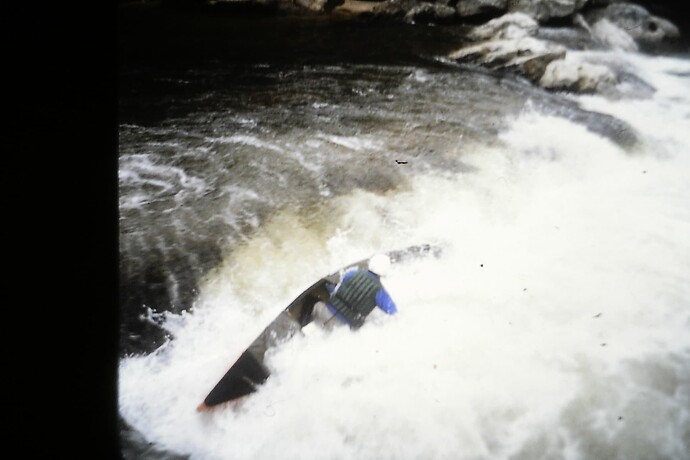 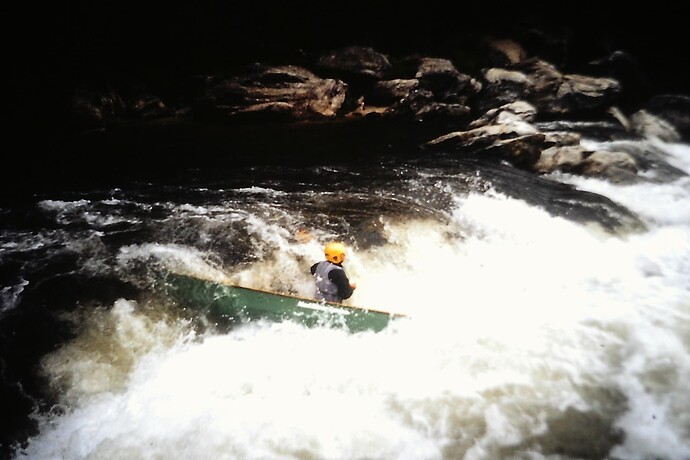 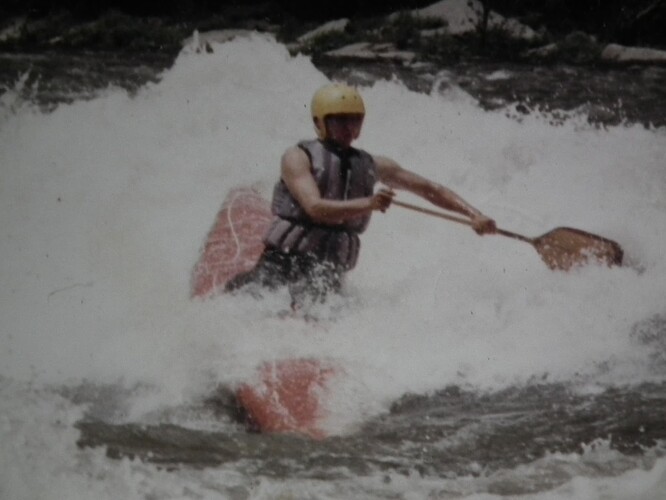 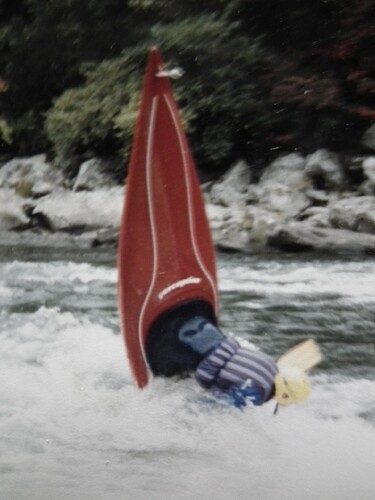 It’s too bad no-one got the one where I flipped on a boulder and miraculously went through a strainer in Class III-IV upper Pemi in Lincoln, NH, in a late fall ww run get-together (that was supposed to have been on a class II-III venue).

Here are some pics of the defunct annual Rhode Island Surf KayaK winter session where I got sucked out of the Boogie and took a trashing. (It was long ago because I was still using a Kokatat Goretex drysuit rather than a wetsuit.) At least I did it in the style with my notorious pink surf helmet (that I had to retire after so much dings.)

I am pleased to be alive and not a “legend.”

That looks like too much fun! I figured out pretty quick that me bringing a ww boat to the beach was a bad idea. I think the first time I went out I buried the nose of the boat in the sand and toppled over on my head and neck. After that, it was just body surfing and boogie boards for me. Another bad idea is overweight middled aged men trying skimmer boards with their young athletic children . The kids never laughed so hard!

You could give it go in the offseason, on smaller swell. TommyCI, former PNetter, came out and did a couple of surf session with some of us in his C1.

OK, I’ll play … and the scanner needed something to do anyway: 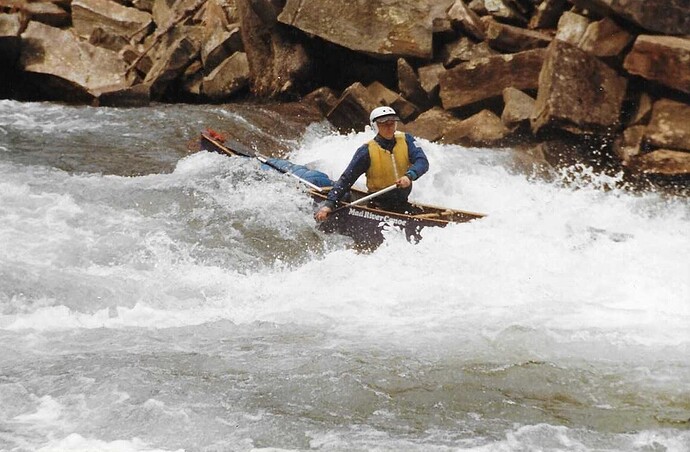 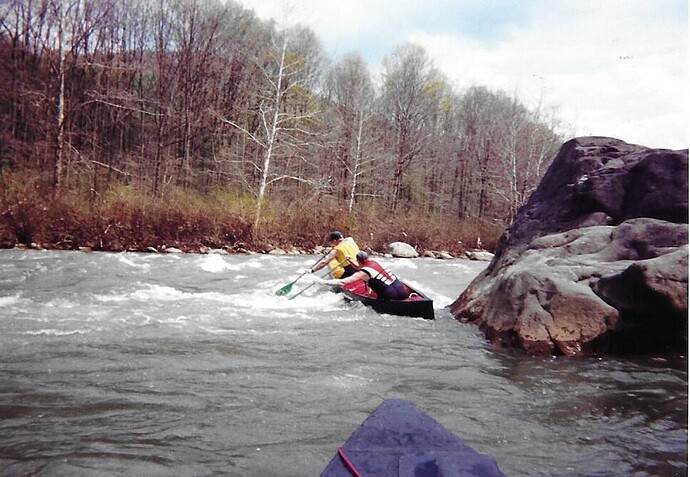 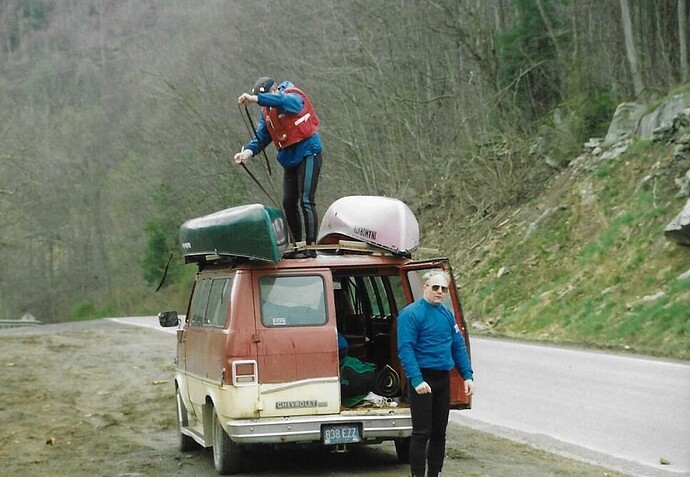 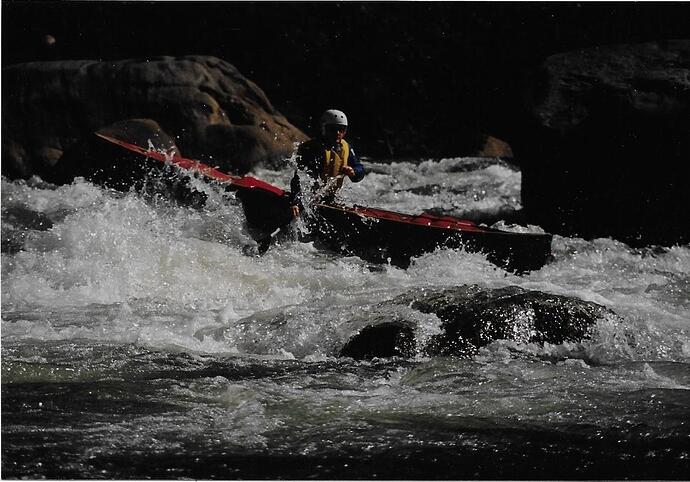 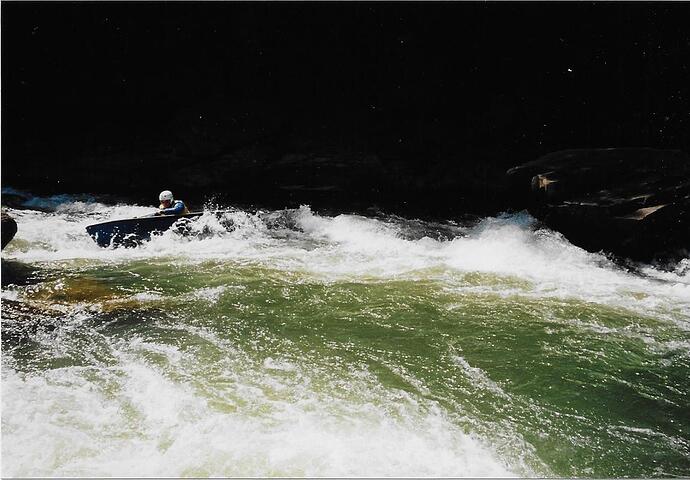 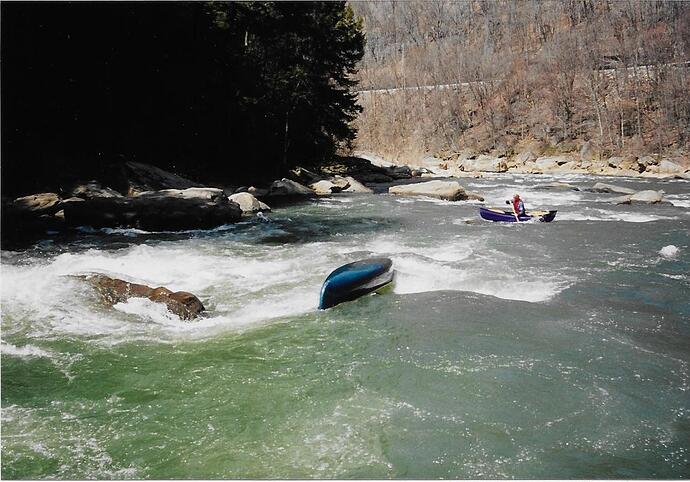 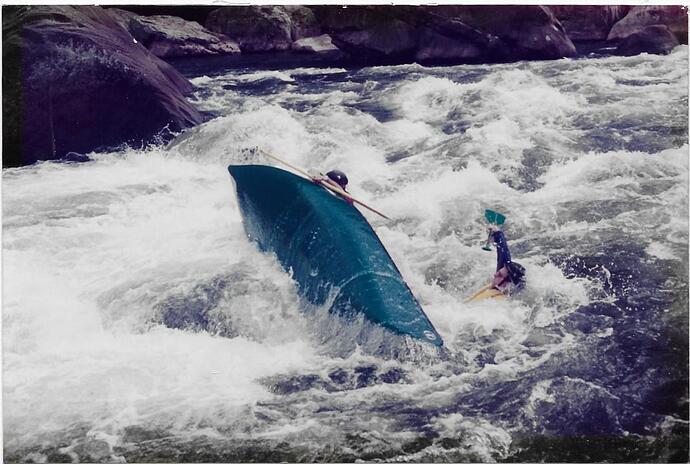 I paddled whitewater with a select group of paddlers, which I chose for their canoeing expertise, and their rescue skills. I knew they were very capable; I had trained with them, we had used our skills, and we had trained others. When, for varied reasons, they hung up their whitewater paddles; so did I.

Early on, we decided that taking photos of ourselves doing whitewater was secondary to making sure everybody survived. As a result, I have very little in the way of thrills and spills photos. But…we’re all still alive…
One of them pulled me out of a hydraulic where I felt like I might have drowned, if he had been taking snapshots of me and my canoe being recirculated. Thanks for paying attenton Gary.

P. S. I have to admit I love watching whitewater thrills and spills videos…as long as they’re not me in the videos. 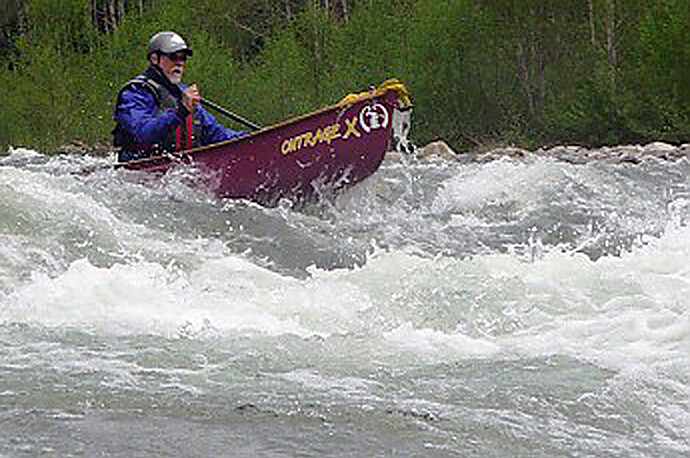 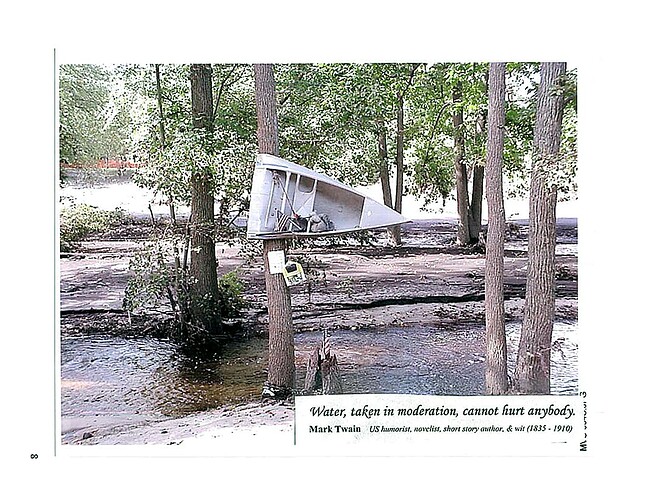 GB it is always best to stay out of the big holes! I found this gem of me from back in the day. My oh my! To think that I used to video commercial raft trips (paddle up ahead all alone) on the New at high levels to make $35 plus 5$ a tape. The eddylines and eddy fences would eat you up as much as the holes.

Some folks claim there is no room for God or religion in paddling. Personally, I said a lot of prayers and had many conversations with the Lord. I’m guessing that’s Berry’s hole (double z at 12 feet ?) in the photo. I watched and filmed a raft guide flip his crew in that hole and get maytagged a bit, he gave up paddling all together after that. Upon further inspection, it might be greyhound at 8’ or 10’. The shape of the hole looks like it. Scaredest I’ve been is the New at high water. I call this style of boating- evasive boating- much of the river may be washed out but what is left is to be avoided, you spend the day running away from everything 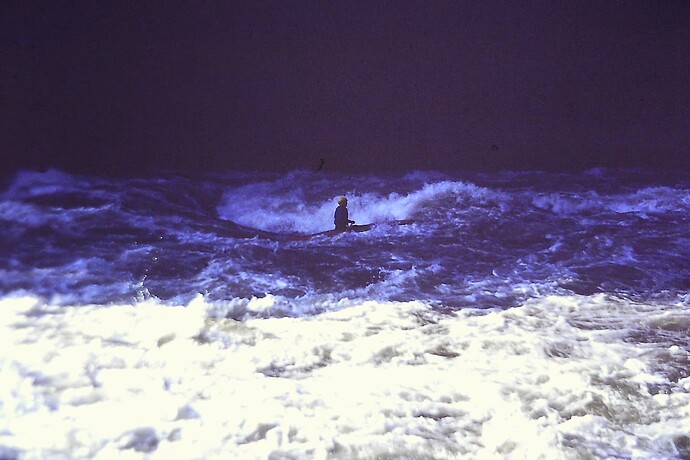 One of the advantages of paddling OC-1/OC-2 is that you are already on your knees when it’s time for prayer.

Living in South-Central Michigan I wasn’t willing to pay the costs (time, relationships, money, jobs) to get good enough for that level. Class III+ maybe IV- on a REALLY good day.

Here are some gnarly stuff:

Those drops would be suicidal for me. 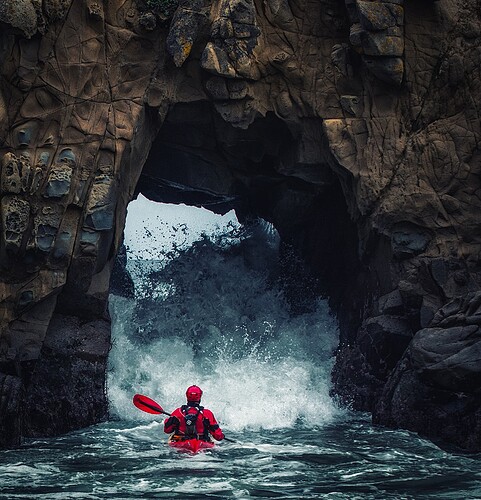 Here’s a video showing why east coast surfing can be tough sometimes.
The things we do for a little ride…no one promised vacationing is easy! 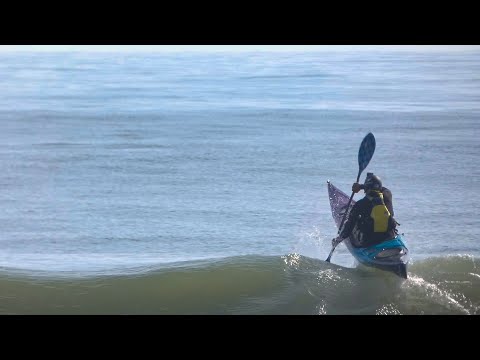