I have roof top carriers and it would be easier to secure the kayaks if I could find front tow hooks ( I have rear ) made for my 2017 expedition. Ford doesn’t show any for my VIN. Ford F-150 has an accessory part # but the people I’ve asked at different Ford parts venues don’t think that they will work. There are pre-drilled holes in the frame accessible from the plastic knock-outs located on each side of the front license plate bracket.
I have checked salvage yards within a 50 mile radius without success.

Any advice will be appreciated.

Hood loops work way better; it has been 30 years since I used tow hooks. Here is one example
https://www.amazon.com/FishYuan-Quick-Loops-Anchor-Straps/dp/B07TWKXNT2

I’ve been using these for about 10 years. No issues whatsoever with any paint wear on the hood.

Another advocate for hood loops.

Has anyone mentioned hood loops?

Those must be threaded holes behind the plastic knock-outs, so you should be able to buy simple eyebolts to thread into those. Head for a hardware store and try some different sizes of bolts to see which one has the correct thread. Then, if they don’t have eyebolts in that thread, see if they can order some for you. I’m guessing it’s going to be an SAE (non-metric) thread size around 1/2-13 to 3/4-10 inch.

Car-part.com is a great site for shopping many junkyards

I don’t know your VIN, but when I googled, these show as fitting a 2017 Ford Expedition - Ford OE FL3Z17A954C. I also found none-OEM replacements.

They appear to be $40-65 each new though. Hood loops are certainly cheaper than that.

Hood loops. Spend a few bucks and buy them or make your own with rope or strips of velcro. And the bow line can’t get caught in a wheel well, usually too short.

These are the ones I have installed on my flex. Just used a bolt on each side that holds the fender on. The flip down and store in the engine bay without a problem

I use a motorcycle tie down loop looped through the hood latch. Loop sticks out from under hood in the center a couple of inches and I just tie the ropes through it. If I only have one boat up there I’ll use a hood loop off to the side. 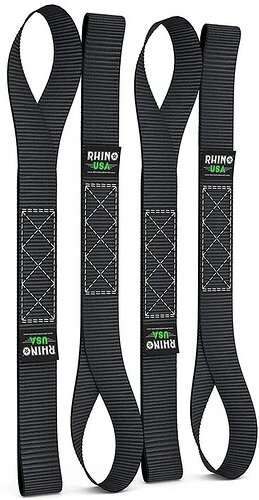 Make them with paracord, they are essentially free.

I know there should be nearly no tension on the lines, but I can’t get comfortable with tying off to the latch. If something fails and it pulled hard enough to somehow damage the latch or release it, you would be in for a world of pain. As unlikely as that is, I just don’t see the benefit to tying off there

I have never tied off to a latch and don’t see the need. My loops go around a stretch of metal inside the hood towards the out edge on each side. It is the framework that supports the front fenders.

My hood latch is the strongest thing under the front of the hood. More secure and less chance of a problem than using hood loops.

Wow! After rudder, skeg or neither, … or bow and stern tiedowns or not, … hood loops seems to be the most contentious topic here. I’ll defend SLJ by saying that I like my bow tie down as far forward as possible so I generally rig up something that comes up under the front of the car or pops through a space at the top of the grill where there’s some metal behind it. But I see nothing wrong with hood loops either - so I agree with everyone and therefore you can’t disagree with me

Me also a bit surprised at some of the details that generated a debate…
The cross cross of the bow lines in front of me that results from using the hood loops for two boats did take some getting used to. But for most of those trips these days so does anticipating stops. Since I am old enough that I really do have to stop every couple or so hours to stretch a leg like they recommend…